22 Jul 2007
Some Kings, Having a Bad Hair Day
Your Honour, I have no idea what happened to the princes in the Tower, I swear.

But I do know what will happen to the idiot who did my hair this morning. Mwuahaha. 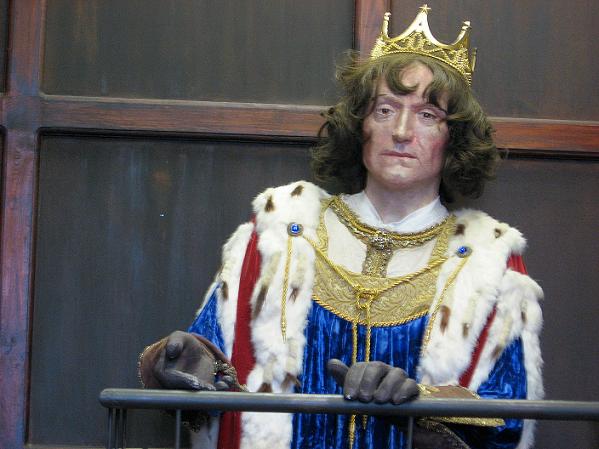 The scene is accompanied by an audiotape that plays a virtual trial with the arguments for and against Richard's involvement in the death of the princes safekept / imprisoned in the Tower in London.

York has close connections to Richard III and there's a little museum dedicated to him. A fun place hidden in one of the towers of the old town fortifications.

And for our Edward fans: 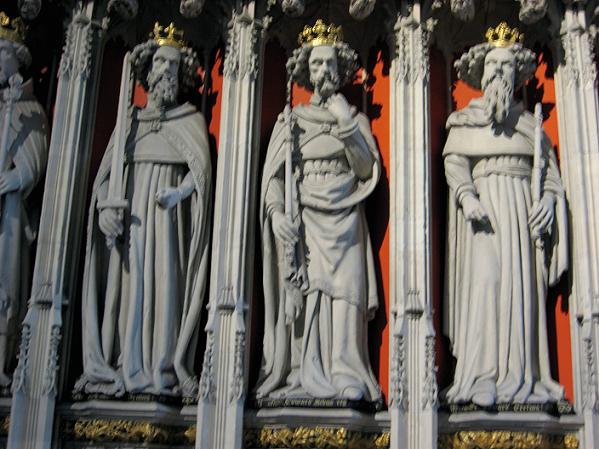 Edward I-III, York Minster
There are statues of the kings of England from Henry I to Richard III.

I can't help, but Edward III's hair looks like a perm gone wild. And that Gimli beard ... Ed II looks sullen. Did Piers smile at another man? :)

I took the photo without a flash. It's slightly blurred but the relief is a lot more plastic than in a pic of the same motive I took with flash and which looks cold and flat. An experience I've made more than once.

Comments:
Cool pictures and facts. I've been to York,but don't remember hearing about the Richard museum. Although I might not have paid attention (this was quite a while ago).

And Congrats on your 300th posting!

Forget Edward -- Richard's having the hair day from hell!

At long last, something I could make a dumb comment on.

Happy 300th, and thanks for the Eds! How'd Philippa let Ed III get away with that beard? Forget those burghers of Calais--I'd have gotten down on my knees and pleaded for him to trim it a bit!

Ed I looks as if he just found out about Ed II and Piers.

And Richard III should be convicted by the fashion police if nothing else.

Congratulations on 300 posts, and yay for bad perm kings!

Those beards are fearsome!

Ann,
the museum isn't well known. I only found out about it because when I visited another small one, they handed me a card that gave you 50% off the entrance fee in several small museums.

Lol Doug,
not enough sex in my blog, I know. *grin*

Susan,
that beard is downright scary. And is so must have got in the way when eating.

Thank you, Shelley, Meryl and Bernita.

I've changed the titel of the post to Kings with a Bad Hair Day, it fits a lot better. :)

Congratulations!
I missed the Richard III museum in York too. Where is it?

Thank you, Hank and Carla.

The Kassandros from that earlier snippet you posted? Why am I not surprised, lol.