31 Oct 2007
Happy Halloween
It hasn't really found its way to Germany yet, at least I could not get any Halloween candy anywhere, and the houses aren't decorated with vampire toothed pumpkins and green plush Cthulhus. But most people know about it and some kids figured it's a way to get some sweets. That's why I wanted chocolate spiders. 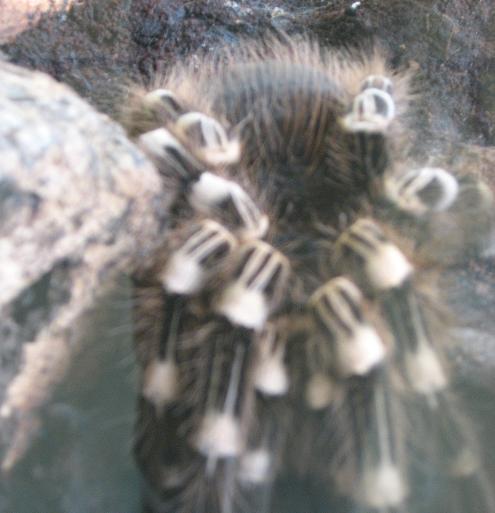 This one is real, a tarantula in the Snake Farm Schladen.
Fortunately behind glass.

And here's what happens to people who don't give treats. 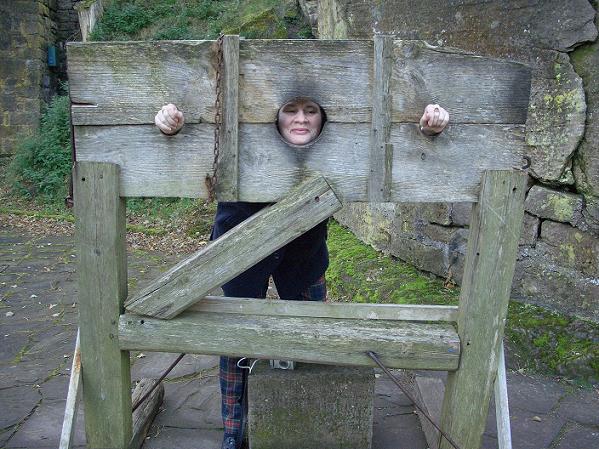 Mediaeval pillory, Hanstein
The holes for the wrists were pretty wide, and I have slender hands, so I got them through without problems. The head was another matter. The pillory was locked, probably to make sure no one would get hurt playing with it.  ¶ October 31, 2007

Halloween isn't that big here either, and the cold usually keeps the kids inside. More chocolate for me :)

Hi James, long time no see. Yeah, I should pack those trews next time I visit some Scottish castles. :)

Same here, Celedë. I got some non-Halloween chocolate to be on the safe side, but so far no kids have shown up, and they should be to bed soon.

I lurk, Gabriele. You may not see me, but I'm always there;}#

James the Ghost. How Halloween-ish. :)

Halloween isn't big in NZ either, Gabriele. We had quite a few kids running up and down the street looking for sweets and chocolate but we don't really celebrate. I think we're missing out ;)

Tarantulas are so cool.

Used to be very big here, but I think it's dying out.

chocolate...spiders? Who would profane teh sacred chocolate with eight legs?? and multi faceted eyes? eww...

Shelley, they are cool - with glass between me and them. I don't think I'd have one walk over my arm. *shudder*

Bernita, proof of an increasing rift between Canada and the US? ;)

Constance, I saw pics of them in the news, and thought they looked cute. But obviously they only sell in the US.

Well, it's Halloween, Alianore. *grin* Since it was almost impossible to get shots through the glass because of the reflcetions, you'll be spared further creepy crawlies. But I'd have like to get more pics.

Eeek for the spider, and lol for the pillory!
Can you imagine getting stuck in one? How horrible!

Well, it's not exactly comfortable. :)

Lol Jaye. You have them outside the glass down under, don't you? So a tarantula pic may indeed not be so much fun. ;)