5 Dec 2007
Hanstein Introduction, 2
The first mention of Hanstein Castle names it as one of the possessions of Otto Count of Northeim and Duke of Bavaria. It was destroyed in 1070 by King Heinrich IV - I've mentioned in this post, that the relationship between Otto and Heinrich was an uneasy one since Otto was one of the major players in the Saxon opposition against the king.

The conflict started by an intrigue when a certain Egino accused Otto of planning to murder King Heinrich. I'll get back to events that surround the accusation and Heinrich's and Otto's reactions. What is clear is that in 1070 things had gone downriver really bad; Otto and his friend Magnus Billung had forfeited all their allodial possessions and fiefs and been proclaimed outlaws. 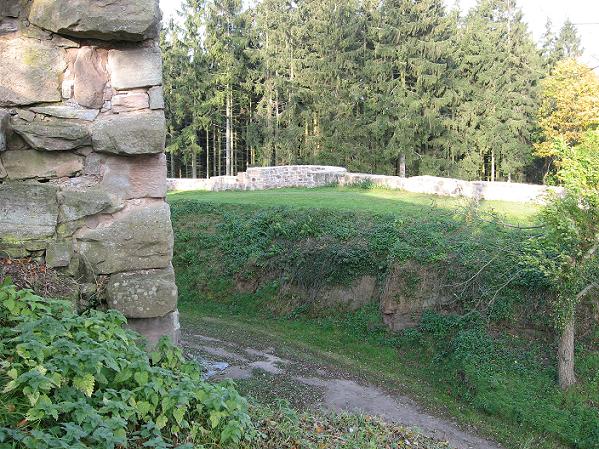 The Hanstein, then still a wooden castle with probably only one moat and curtain wall, was destroyed by King Heinrich during what one website refers to as Battle of Eschwege. I researched that and it turned out it was a skirmish at best and not immediately connected with King Heinrich IV's actions. In September 1070, Otto of Northeim fought against a certain count Ruotger or Rugger who held land in the Eschwege area, commanding a troop of Thuringians. No siege is mentioned, so the Hanstein probably wasn't involved in that particular conflict. Nor do I think a minor troop would have had the siege engines necessary to conquer a place as well fortified as Hanstein Castle.

Otto won that one, but it didn't really change his situation, which was rather desperate at the time. Also, Ruotger seemed to have escaped, if he's the same mentioned five years later in connection with a transaction involving the Eschwege earldom.

Here are some more shots. , I like the softening light effects of a low winter sun behind the motives in these. Makes the pictures look a bit like old postcards. 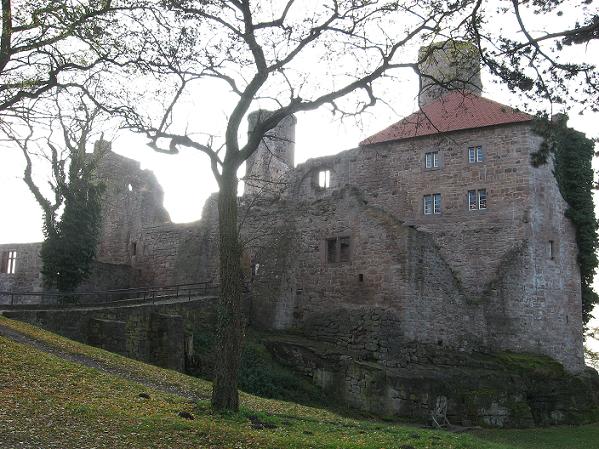 Reconstructed main house
The reconstructed part has three storeys, the lower one with a low, cross grain vaulted ceiling and small windows, the upper ones more like halls, with a loftier cassette ceiling and somewhat larger windows. All were - insufficiently, I'm afraid - heated by a fireplace.

A cellar was hewn into the bedrock of the base. It held storage rooms and prison cells in former times, and today there's a little torture chamber as tourist attraction. 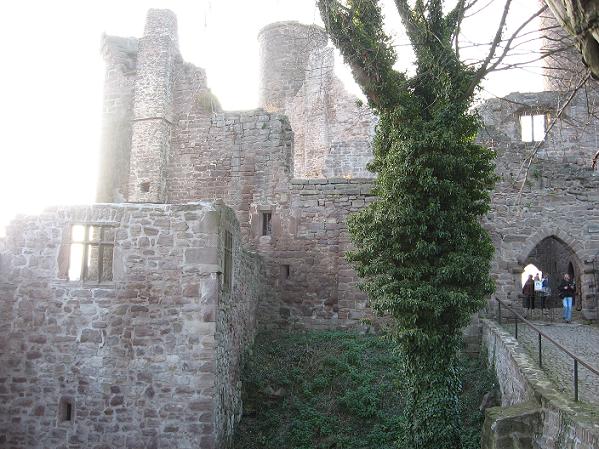 Entrance to the main building, seen from the east
In former times, access was only possible over a drawbridge. The lines of the inner trench are now softened into a park, but when the castle was still in use, the moat must have run around the entire main building, except to the south where the steep rocks offer sufficient protection.

The structure to the left with the one large window near the rim is supposed to have been the chapel. Behind it, you can see one of the chimneys running along outside the walls of another building.

Comments:
Very interesting. I'm afraid I don't know as much about German history as I probably should, mostly I learned about it where it collided with English history. Great pictures, but then I like castles. :)

Lol, sometimes it merged. Welf IV, the Hang My Cape to The Wind guy who divorced Otto's daughter and took over the duchy of Bavaria, married Judith of Flanders, widow of Tostig Godwinson who fell at Stamford Bridge, in second marriage. And Otto of Northeim was the great-great-grandfather of Heinrich the Lion Duke of Saxony who married Maud, daugther of Henry II of England and Eleanor of Aquitaine. Their son, another Otto, would become Emperor of the Holy Roman Empire.