27 Mar 2008
Henry and William at Carlisle Castle
Because we had German castles for a while now, I'll give you a Norman one for a change. And no, the title doesn't imply a slashy subtext, I very much doubt Henry II of England was wired that way, just ask Rosamond de Clifford.

I've mentioned in another post about Carlisle Castle that King David of Scotland captured it in 1135. David used the unruly times of the anarchy caused by the struggles between Stephen and Maud to attempt and add Northumbria (he was Earl of Northumberland) to Scotland. He finished the stone keep begun by Henry I.

David died at Carlise in 1153, and a year later Henry II ascended to the English throne and put an end to the internal strife for good. 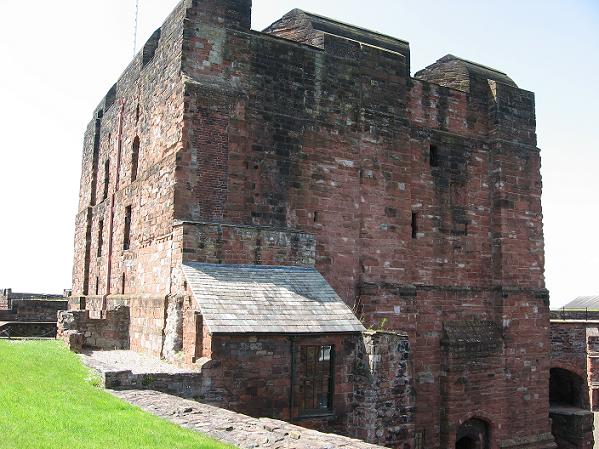 David's successor was Malcolm IV 'the Maiden' and no match for Henry, who promptly recaptured Carlisle in 1157 and put and end to Scottish ambitions towards Northumbria as well, or so he thought. He added a second curtain wall and the outer gatehouse to the castle.

Malcolm swore an oath of fealty for Northumberland to King Henry, thus further muddling up an already complicated pattern, because Malcom was king in his own right of Scotland and vassal of Henry II for Northumberland, while Henry II, King of England in his own right, was vassal of the King of France for the duchy of Normandy, and the possessions of his wife Eleanore, Aquitaine and Poitou. As Duke of Normandy, he was also liegelord to the Duke of Brittany, a relation not much liked by the ruling house of Brittany.

As Henry's vassal, Malcolm accompanied him on the siege of Toulouse in southern France, where Henry fished in the waters of the French king and proved a very disobedient vassal in his turn. Malcolm, on the other side, much as he called himself King of Scotland, had a bunch of Northmen sitting in Caithness and a bunch of Gaelic clans on the westcoast who didn't accept him as king; the latter were led by Somarled or Somhairle of Argyll. Somarled got killed in the battle of Renfrew and the west was a bit calmer for some time after that, but since Malcolm died shortly thereafter, it was of use only to his brother William 'the Lion' who succeeded him. 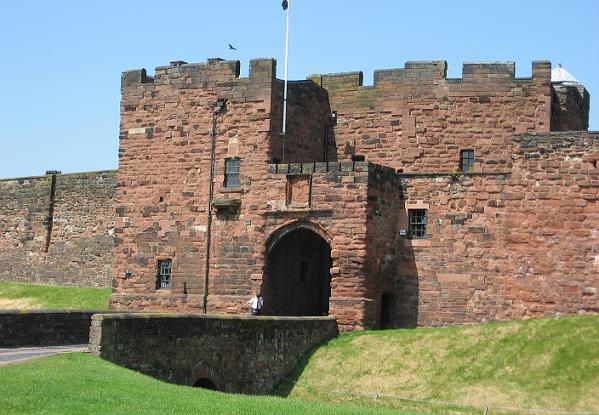 Outer Gatehouse
William was a very different character and a lot less willing than Malcolm to swear oaths to Henry, or leave one of the biggest castles in his earldom of Northumberland to him, claiming Northumbria to be part of Scotland.

Henry II over time managed to estrange his wife and antagonise his older sons - or maybe they were simply born a dysfunctional lot - so in 1173, William took his chance with Henry's eldest son, another Henry, who rebelled against daddy, and invaded Northumbria, laying siege to Carlisle while Henry the Son was busy causing troubles in the south.

The garrison of Carlisle was led by Robert de Vaux, who, confronted with diminishing supplies, unwilling soldiers and the aspect of being hanged outside the castle in chains (doesn't that remind us of someone? lol) considered surrender, but William's Scottish army left before they achieved their goal. I wonder if there were fresh problems on the westcoast and/or in Caithness that William abandoned the siege, because he laid siege to Alnwick castle only a few months later. But maybe his army was understrength then. 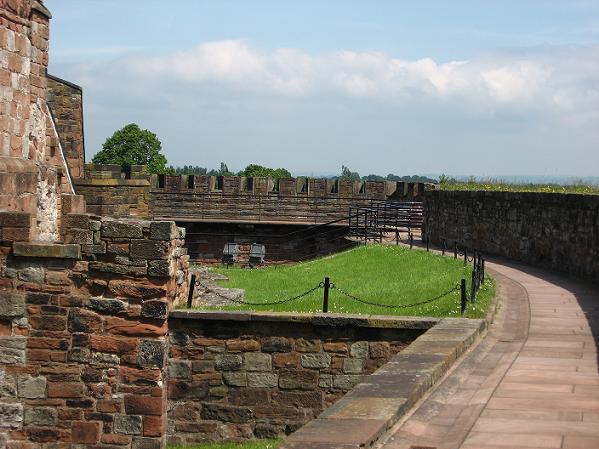 Battlements on the outer curtain wall
In 1174, William was captured at Alnwick, and any Scottish ambitions to Northumbria ended with an oath of fealty not only for the earldom but for Scotland itself that King William had to swear to King Henry II; result of the treaty of Falaise. Yes, that's another Norman castle, this time in Normandy proper. Those kings got around a lot. (It's also the seat of Roderic's uncle in Kings and Rebels because I'm going to use the conflict between William and Henry as model for the conflict between Villembaud and Robert.)

Henry came once more to Carlisle in 1186 and ordered a room for his private use to be established in the castle. He obviously liked the place. Or maybe he liked the idea that his presence so near to Scotland would have riled William and made him uneasy. 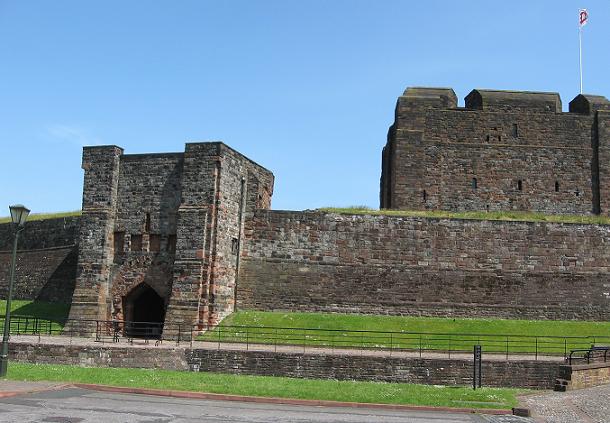 Inner gatehouse with inner curtain wall, and keep in the background
After Henry's death in 1189, Carlisle didn't see a king for a decade because Richard was off to the Holy Land, Germany, and other places more southerly, but John visited Carlisle several times. He wasn't very welcome, because he always raised the taxes. William's son Allexander II joined the rebellious barons in 1216, and it was his men who undermined the outer curtain and managed to win the inner gate, damaging the gatehouse in the process. There was hand to hand fighting in the keep itself until the castle finally fell to the rebels.

But Alexander was not able to earn any lasting fruits from this, and the relationship between Scotland and England remained strained and unruly. And then came Edward I.   ¶ March 27, 2008

Comments:
You're right, that thing would be a challenge to break into. I better call up some Orcs. *g*

All the intrigue and manuevering always fascinates me. How did they manage without modern communication? They must have had a great network of spies.

Or maybe he liked the idea that his presence so near to Scotland would have riled William and made him uneasy.

I'd put my money on that one!

Fascinating stuff. I love visiting sites and finding out what went on there (or if I can't do that, imagining it). It's incredible when you stop and think about all the history enclosed by those old stone walls! :)

Shelley, it's amazing how much some people got around in the Middle Ages. Henry II went all the way from Toulouse in southern France to Newcastle in a few week,s and Friedrich Barbarosse crossed the Alpes into Italy so often he beats modern tourists. :)

Kirsten, my first experience of Scottishness was a comment from an Edinburgh taxi driver as I told him I wanted to see some castles. "We should have built them stronger to keep the English out." :)

It is, Bernita. The Normans built those heavy castles in flat areas while the German castles are more slender and use the hilltops as natural defenses. I'm looking forward to see what the Normans did with their big castles and the Welsh mountains.

I'm glad to see all of that green, green grass to keep the plot bunnies healthy. Cause I saw a slew of them there. :)
And every time you post pictures of castles I get the urge to make a model of my own castle (and I'm lousy at making models). I'll have to give it a try though.

It's been a while since I dropped by, Gabriele. (HI!) Your photos of intriguing castles and all the historical information never cease to delight. d:)

Hi - I haven't dropped in for ages, but was over at Colchester yesterday, and took shots at the museum (links to photoblog) wondered if you're interested in passing....!

Hi Debra, welcome back (I'm a lazy commenter on your blog, too. *hangs head*)

Thanks Julia, I'll come over and have a look. :)

Ahh....Carlisle. What a nice place! Though I am sure Mary Queen of Scots had a different feeling towards the pile! The red stones are so reminiscient of Prince Edward Island...you can almost see Anne of Green Gables prancing about.

I love the big moat....raise lots of geese in a nice dry moat like that! It was always a dry moat.

Anyway, did you get down to Hardknott?