7 Apr 2008
Carlisle Castle and the Edwards
After some time of peace, Carlisle came back into the focus of politics and war during the reign of the three Edwards. Edward I - who ranks high on the Top Ten list of most unpopular persons in Scotland - used the succession quarrels after the death of Alexander III to claim the hegemony over Scotland. Of course, the Scots, or at least a number of important Scottish nobles with claims of their own, told him to slink off.

Edward I did the opposite and declared war upon Scotland. As answer, the Scots launched a surprise attack on Carlisle in May 1296. They didn't succeed to conquer the place, though, and neither did they in the second attempt after the Scottish victory at Stirling Bridge. But it brought the importance of Carlisle for the English back to attention.

Edward I used the castle as assembling point and storage stronghold, locked prisoners up in the keep, and spent some time in the castle himself. Around the time parliament met at Carlisle in 1306, Edward had a great hall for the king's household built in the inner bailey. He also added additional fortifications, re-cut the moats (not himself, of course, and I don't think he let his son do it much as Edward II loved digging ditches) and placed some springalds, giant crossbows, on the keep and western postern. The remains of the great hall and the king's appartements have been replaced by some smaller buildings in the 19th century. 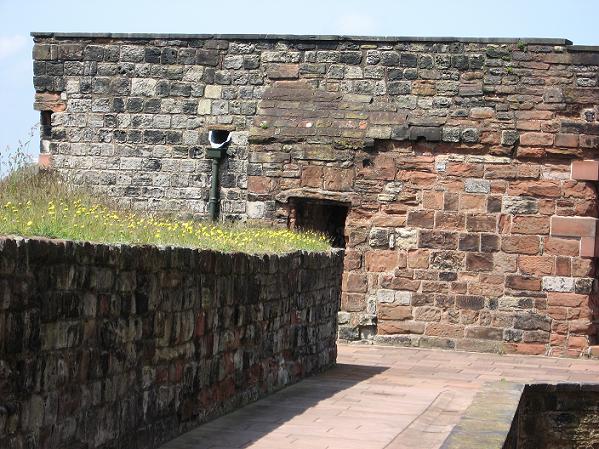 Western postern on the battlements, facing the tower of the inner gate

Thus, Edward I left his son a well fortified castle, and Edward II used it as base for his Scottish war as well. But he lost the battle of Bannockburn in 1314 and returned to England, defeated and without even a shoulder to cry on since Piers was already dead and Hugh Despenser not yet his favourite.

Robert the Bruce lost no time to try and get his hands on Carlisle. The town held a garrison of 500 men commanded by Andrew de Harclay. Harclay seemed to have been a skilled commander, but it was the weather that caused the final result. It was a British summer like the one last year, rain, and rain, and more rain. When the Scots tried to dig mines under the castle walls, they filled with water, the assault towers got stuck in the mud, any material to fill the ditches swam away, and so even the Scots, as used to rainy summers as the English, had enough and retreated in early August 1315. 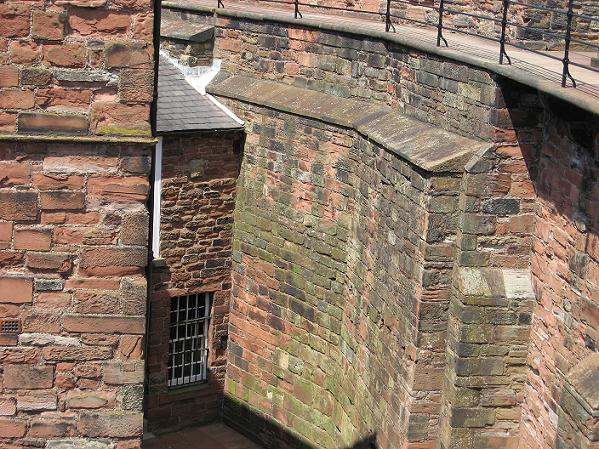 View from the battlements into the inner bailey
With the bad press Ed II had at that time, the unsuccessful siege of Carlisle was proclaimed a victory, and Harclay earned some very wet laurels. *grin* He started a military career and was created Earl of Carlisle after he defeated the rebel Thomas of Lancaster in the battle of Boroughbridge in 1322 (remember the unhappy fate of Roger de Clifford in that context). But Harclay had not much time to enjoy his new position. He got entangled in border politics with the Scots and less than a year later was summoned to court to answer charges of conspiracy. He failed to appear and King Edward sent a party of knights to arrest him. They caught Harclay in his room in the castle, and though proclaiming his innocence, Andrew de Harclay suffered the same traitor's death as Lancaster; he was hanged, drawn and quatered on Carlisle's Gallows Hill.

Ironically, the very truce de Harclay had conspired for was concluded between Edward II and the Scots only three months later. Quod licet Iovi ....

Edward II was disposed and murdered (or not?) in 1327, and a few years later his son, Edward III, made it clear to his mother that he'd reign without her and Roger de Mortimer now, thank you very much. Mortimer lost his head, while Isabella was retired with a handsome apanage. Edward III was a better general than is father and won most of his battles, among them Crécy and indirectly, through William la Zouche Archbishop of York, St. Neville's Cross, both in 1346. 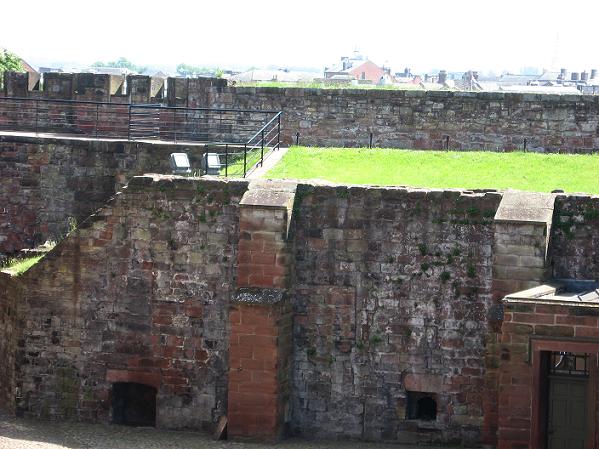 View across inner bailey towards the battlements on the curtain wall
The king of the Scots at that time was David II. He spent several years in France because his nobles didn't like him (did Scottish nobles ever like their king?). A few years after his return, Philippe IV of France, fearing an English invasion - in fact, he had them already sitting round Calais - asked David under the conditions of the Auld Alliance to invade England in his turn, to keep them busy in the north.

David had all the military advantages on his side, but he blundered around in the borderlands and finally managed to take up a strategically bad position at St. Neville's Cross. After the English longbowmen lured the Scottish army to attack and thus made it split into smaller groups because of the terrain, the Scots proved an easy deal for the English. Several Scottish leaders fled and David got captured. He was brought to Calais, forced into negotiations with King Edward III and kept prisoner in various English castles until 1357 (Treaty of Berwick). He promised to pay a ransom which he never managed to scrape out of the impoverished land.

Edward III had last been to Carlisle Castle in 1335. After St. Neville's Cross, he and his successors concentrated on their interests in France. That time would later be called the Hundred Years War.  ¶ April 07, 2008

Reminds me of the song:
"And stood against them,
Proud Edward's army,
And sent them homeward,
To think again."

No wonder the stones are red.

Thank you, Hank, Susan and Ann.

Bernita, Yeah, Edward thought again and didn't repeat the fun, but the "shameful loss of Scotland" was one of the reasons presented to Edward when he was forced to abdicate in favour of his son.

I enjoyed both the post and the photos. I always learn stuff when I visit. Thanks, Gabriele!

Great pictures! Really gives you a feel for the time and the place. :)

Oooo... my peeps came from the Berwick area. I wonder what side they were on?

Neville's Cross occupies about the first third of Bernard Cornwell's Vagabond (Book 2 in Thomas of Hookton/Grail Quest), if I remember rightly.

Harcla always struck me as an interesting character who got a raw deal.

Thank you, Shelley and Meghan.

Jaye, it would be fun to find out, wouldn't it?

I think so, Carla. Have to reread the books some day. And yes, Harcla looks like an interesting character.

Alianore, it's thanks to your posts about Ed that I can spice my posts with some humorous side-remarks and make them more entertaining to read.

Neat pictures. But I don't think I could have lived in a castle without space heaters. *g*

Lol no, my romantic inclinations don't include cold feet. :)

Great pictures and a pithy, informative history lesson! Thanks!
Amazing how bloody and awful the wars with Wales and Scotland were against the English.

Thank you, Sam.
Yeah, the Medieaval people should have learned a thing or two from the Romans who never managed to conquer Scotland and didn'treally get a firm ground in Wales, either, despite their forts.

Not that they fared that much better with the Germans. :)

Great to see what Carlisle Castle looks like - haven't been there .... yet!

Yes, I've always felt sorry for Harcla too - one year a hero, next year a zero.

Lady D, it's a big, massive thing of a castle and not easy to take in pre-powder times.

I'm really looking forward to visiting some of the whoppers in Wales; according to pics I've seen, places like Pembroke or Caernarfon must be a splendid sight.

Thanks for this, Gabriele. Visited Carlisle Castle a few years ago but I didn't know all of this history. Great photos too, as ever. I know you visited Tullie House museum a while ago - did you see the wondrous Cursing Stone with its elaborate and imaginative cursing of the local reivers?

That's one impressive curse, isn't it? I saw the stone but photos weren't allowed in the museum (except the Roman saddle).

Gabrielle - when you go to North Wales be sure to visit some of the native castles too - such as Dolwyddelan (my favourite) and Castell-Y-Bere. They are much smaller but have so much atmosphere. For Edwardian Castles Caernarfon and Beaumaris are really impressive!

Lady D, Caernarfon and Beaumaris are on my list; the rest depends on public traffic.

And no problem, a lot of people spell my name with -ll- :)

Carlisle Castle, the most besieged castle in England.10 times in all I believe

Hi everybody, here is a new novel about King Edward II of England, and a website dedicated to an exciting new archival research project aimed at discovering the truth about how he really died. The novel comes highly recommended by Kathryn Warner.
http://www.youtube.com/watch?v=QUfoCcNu6GA&feature=share
http://theauramalaproject.wordpress.com/