7 Nov 2008
Another Pretty Town
The beginnings of Treffurt, the little town beneath the Normanstein, remain in obscurity. The first mention of the place can be found in a charte of the archbishop Ruthard of Mainz, dating from 1104 and naming one pilgrim de Trifurte as witness to the donation of an altar in a village nearby. At that time the Knights of Trifurt built the castle to protect the three Werra fords at the foot of the mountain.

As mentioned in the post about the castle, the town administration was divided between Thuringia, Hessia and Mainz after 1336, each of them represented by a magistrate. The town developed a decent prosperity thanks to pottery and vintages. Wine was sold as far as England, but during the Thirty Years War the growth of vines declined, and the climate changed; today the Werra valley is no wine area. 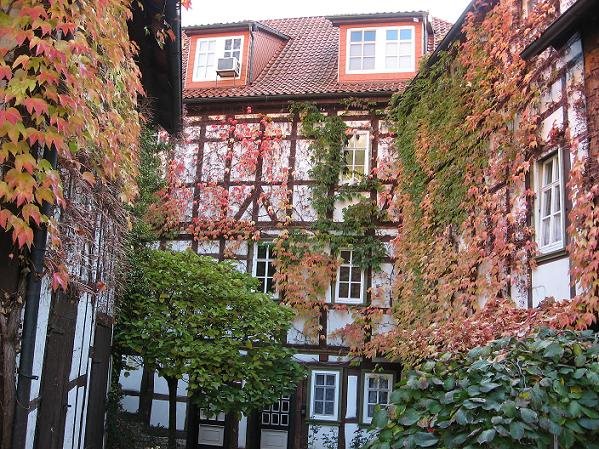 Yard of the Mainzer Hof, seat of one of the magistrates

Today, Treffurt has left the east-German past mostly behind, the houses have been renovated and many half timbered buildings could be saved. But some ruins remain, due to lack of money to restore them, and now in autumn there's still a whiff of the brown coal used to fire heatings in GDR times, though much less penetrating than it was the first times I visited east German places shortly after the wall fell. Most households have changed to oil or gas. 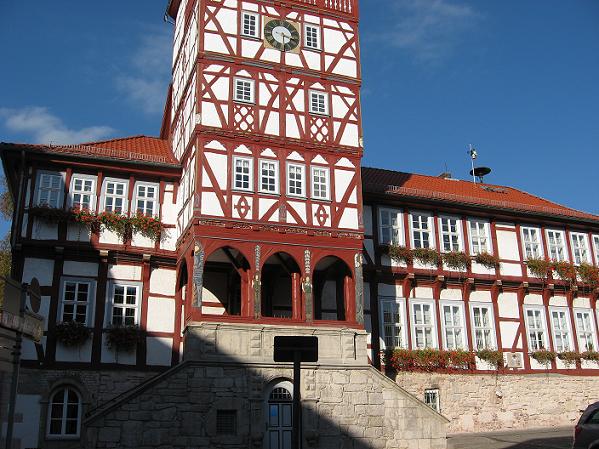 Renaissaince Town Hall
The Renaissance town hall is one of the prettiest in the region. It was built on older foundations in 1550, the stairs and tower were added 1609-1616. The weight of the tower rests on only eight mighty oak beams - the architectural knowledge of the Middle Ages should not be underestimated. After all, it still stands. 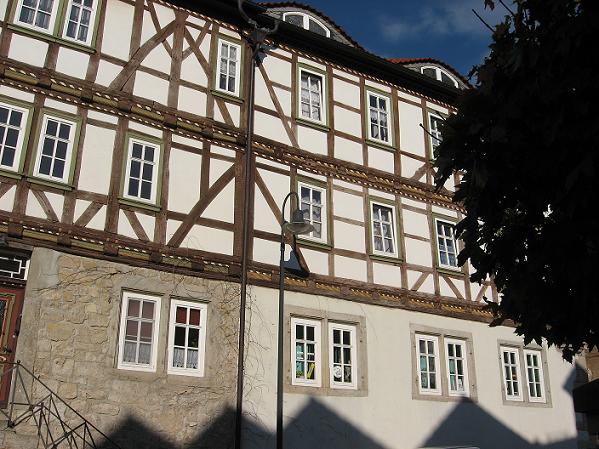 Detail of the so-called Ohrfeigenhaus
This house (I could only catch a part of it because the streets are so narrow) is called Ohrfeigenhaus, Slap House, dating from 1608. The Hessian magistrate, a man named Bley, had asked for permission to cut a few trees in the woods in possession of the Prince Elector of Kurhessia and build a modest little house, which was granted to him. When the Prince Elector visited the town some time afterwards and beheld the whopping big house Bley had erected, he gave the magistrate a slap for his lies, in front of the gathered town administration and his own entourage. 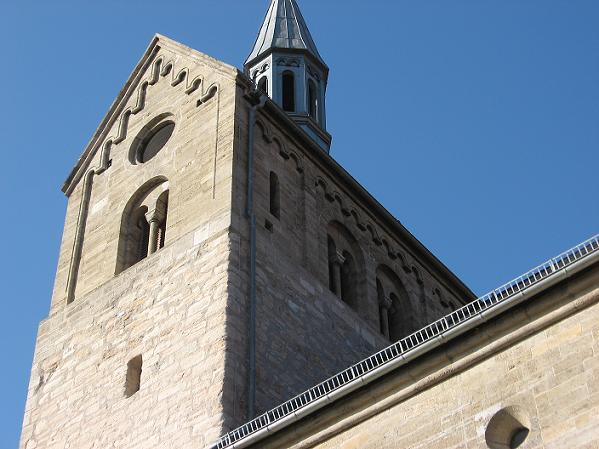 West towers of St.Bonifatius Church
The St.Bonifatius Church was built at the beginning of the 13th century, in the style between Romanesque and Gothic. The main nave was elongated in 1341 and a new apse added. In the 19th century the church was altered again, for example by adding larger windows to the aisles. The Westwerk remains in its original structure, though.

Unfortunately there are repairs going on, so I couldn't see the interior. But I got this interior shot. 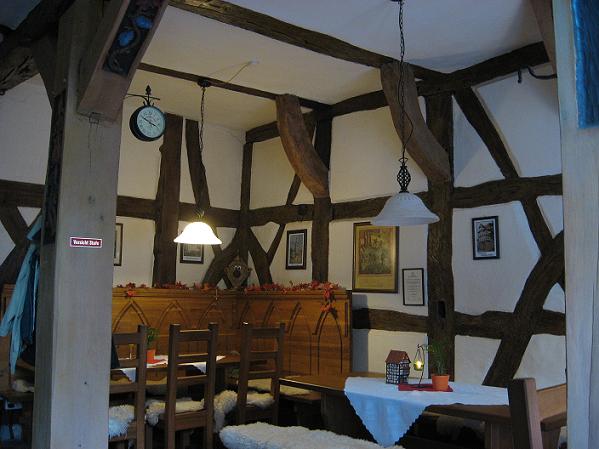 Interior of the oldest house in Treffurt
The oldest remaining house in Treffurt dates to 1546. It had been a tavern, and today, after renovation, again houses a café and a little B&B. They had pancakes with warm cherries and whipped cream. *yum*

It's really pretty from the outside as well - I managed to get one or two decent pics for another post despite the low sun that made it increasingly difficult to photograph in the narrow lanes. 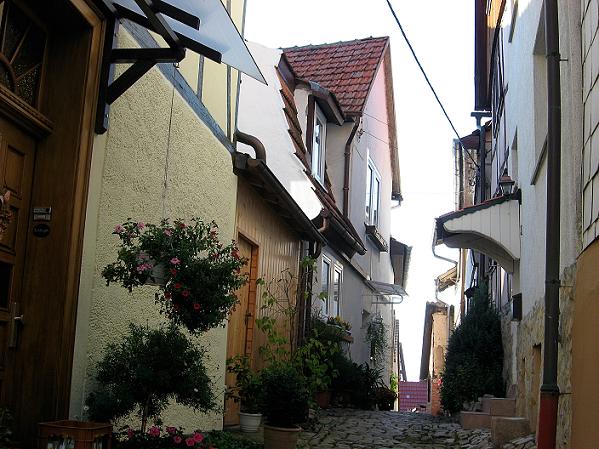 The smallest lane in Treffurt
Treffurt has still a Mediaeval feel to the old town; there's mosty cobblestones, some lanes are too narrow for modern cars, and some of them are rather steep because the town croaches up part of the Normanstein mountain - it was a safer terrain than the Werra shores which tend to get flooded in spring. Modern industry is less prudent; there are some great halls closer to the river today.  ¶ November 07, 2008

Comments:
It looks like a lovely town. I really like the half-timbered buildings. You have so much history over there. Our oldest buildings are 19th century.

I love small towns. I've been in a circuit last year, from Bucharest to Paris (with a few stops on the way). I loved the German and Austrian small towns, they have such a wonderful atmosphere. Maybe it's just me, but I studied in Bucharest and I didn't like all the haste and agitation around such big cities. I love visiting them, even to stay there for a while. But if I have to choose I will go definitely with the small and old towns. Such as this wonderful Treffurt.
And I did love the Spanish towns too, the smaller ones I mean. As a paradox I love Barcelona (such a huge city), but I would live in Tossa de Mar, a small town along the coast, around 100km from Barcelona. And it has many small lanes such one in the picture from Terffurt. Lovely lanes for walking.
Thank you for showing us this lovely town :)

What a picturesque place.

And by strange coincidence, I've seen the interior of the oldest house before when I was trawling Google images for anything I could use for the Tattered Quill forum! It was quite odd to see it again - with some proper information!

What beautiful buildings. I love half-timbered houses, and that lane in the last photo, with the hanging baskets, is just lovely.

It's always a delight to visit your blog. I love the architectural and historical beauties you show us. d:)

I love that town, especially the interior of the oldest house! Great pics as usual.

Dark Wolf, I could not live in a big city, either, with the exception of maybe Stockholm. The place I live now is a smaller town as well, a bit larger than Treffurt, but with the nice atmosphere of a typical middle sized university town where the university and students domintate life.

Lady D, that's a fun coincidence. Btw, did you manage to find an alternate template for your forum? I've tried to go there a few times but I simply can't read it without getting a headache.

I love these posts. It makes it seem like every other village in Germany is a medieval treasure trove that's just so commonplace that no-one bothers to mention it. Engand's got its treasures, Scotland too, but you find so much everyday survival that we really can't match. Keep it up!

Thank you, Jonathan. There are a lot of old buildings left in towns and villages not hit by many bombs during WW2. Some places, like the severely destroyed Kassel, have turned into rather ugly towns with appartments buildings hastily erected in the 50/60ies in place of older half timbered or Victorian houses. The town where I live escaped the bombs as well, fortunately.

This looks like a really great place to visit, though living so close together with only a narrow lane between buildings would make me a bit claustrophobic.

Lol yes, I suppose the neighbourhood in those narrow lanes is worse than a village. ;)