26 Nov 2008
The Case of the Vanished Wine Cask
Brother Scribe, I don't know where that wine cask went. Honestly. It still had been in the cellar in the Well Tower yesterday. All in know is that it was to be brought up to the buttery this morning but never made it there. Look at all those people milling around in this place. Anyone could have taken it, so why put the blame on me? Ask this guy here - *points to the left* - he's more than a bit drunk and says he doesn't speak English. They always say that when they're caught at something fishy. 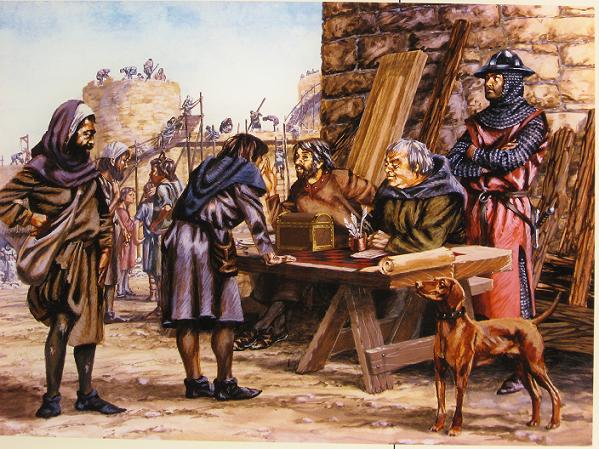 Illustration from the exhibition in Caernarfon Castle, showing the building process

Another possible version could be: Brother Scribe, that guy hasn't been to work all week. He says he's been down with the fever, but can't produce a notification of sickness from his local quacksalver or the barber surgeon who treats the workmen. I'm pretty sure that fever was caused by attending those illegal meetings of the Welsh. *shakes head* I wonder what next; trades unions, strikes, and the 38 hours week? We'll never get the castle finished if that spreads. Some of the workers have even started to complain about the quality of the stew. 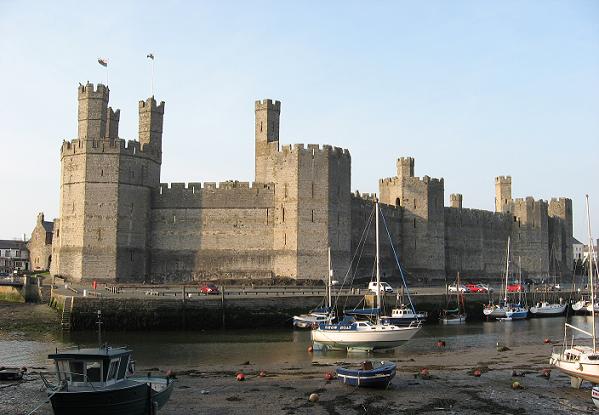 Caernarfon Castle in the evening sun
And because I have taken so many shots on my last evening in Caernarfon when the sun decided to say hello, here's another photo of Caernarfon Castle seen from the other side of the canal. The tower to the left, with the banners on top, is the Eagle Tower. Despite some unfinished structures, and the destruction over time, Master James can be proud of what he achieved. Caernarfon Castle is an impressive building.  ¶ November 26, 2008

Comments:
It is an impressive castle. LOL Gabriele. I like the first version. It's funny that our problems haven't changed much. Theft and taking sickies. :)

Loved the piece, and the pix! One of these days I'll get to see it in person.

Shelley, the taking sickies is at least as old as the Egyptian times. Some shards with provisions and other lists left from work on the Kings' Tombs, have remarks like, "X [one of the art painters] brewed beer yesterday and today has a headache and didn't come to work." Same goes for the Roman Vindolanda tablets, there ware always some soldiers off duty for being sick.

Love the castle photos. The narrative on sick workers carries through the ages.

Master James made fantastic castles, but they're not very organic. For atmosphere, I prefer something with more layers.

Lol Dark Wolf, that's so true. They've been insulating the house next to mine those last weeks and you won't think how much noise it makes to put styrofoam plates and a extra layer of roughcast to a wall.

Zornhau, like some of the original Welsh or German castles. Though personally I prefer if the 19th century alterations have not been too prominent (the Victorian part of Cardiff castle for example is so over the top you can imagine it on a Fabio Romance cover, lol).

So, we meet again, Caernarfon. I thought I'd managed to shake you off after that last essay.

Them Anglo-Normans sure knew how to build things. Give or take the odd sickie, o' course. :)

Lol Kirsten, what was the essay about?

And I'm afraid I have more pics of Caernarfon to post here, like the room where Edward II was not born. ;)

Not to mention the graffito scrawled on a Roman tile in London, "Austalis has been going off by himself every day for thirteen days". Alan Fisk makes it a plot twist in Lord of Silver, but it could just be someone having a moan about a skiving colleague.

The essay was about tokens of cultural change in the Celtic-speaking regions in the period after the Norman Conquest. In a nutshell, I think my argument was, "Normans built big castles in Wales; David I of Scotland liked burghs a hell of a lot." Caernarfon was mentioned a lot, as was Chepstow. :)

Carla, the Romans weren't prude, that's for sure. :)

Kirsten, I have a bunch of photos from Chepstow, too.