26 Jan 2009
Building the Wall
The Hadrian's Wall between Housesteads and Birdoswald counts as the most scenic part, though I doubt the Roman soldiers who built the Wall had an eye for the landscape. For them, it was difficult terrain in an alien country.

For some reason, the guys had taken a liking to olive tree groves, vineyards and sunshine, not to mists and windswept mountains. ;) 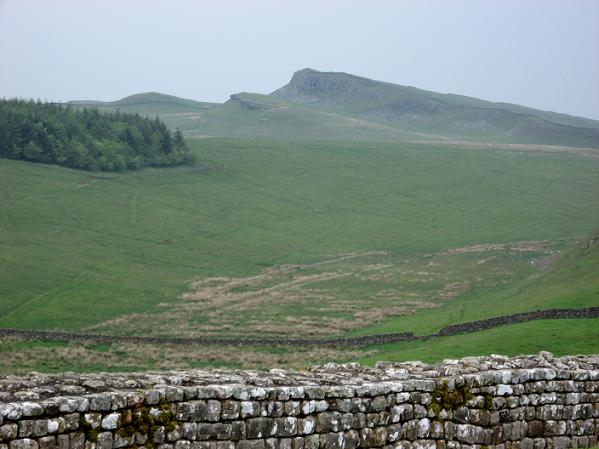 "It's raining, it's cold, we're out of stones and the centurion is in a mean mood because his local girlfriend kicked him out. Why did I join the army again?"

"Health insurance? That damn medicus told me I only have a cold and I'm not sick. And the pay was late twice because the Selgovae keep attacking the escort. Next time they'll tell us to walk to Eboracum and get it ourselves; wait and see."

"With our luck it will be the German Limes. Another place full of rain and savages. And trees." (*) 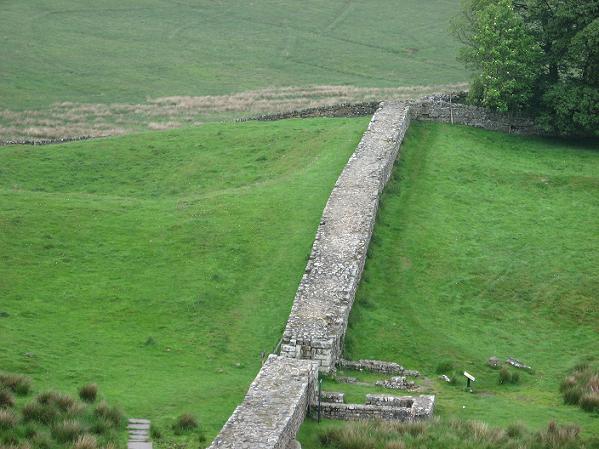 Housesteads (not the original heigth, but you can see how broad the wall was)
Centurion marches up to them. " Gaius Numerius, Quintus Didius, why are you lazy sods sitting around? There's work to be done!"

"There are no more stones, centurion."

"Damn, what twit of a civilian in the staff has messed up this time? The whole useless lot should be sent to the arena as fodder for the lions, it would be the one useful thing they did in their life." 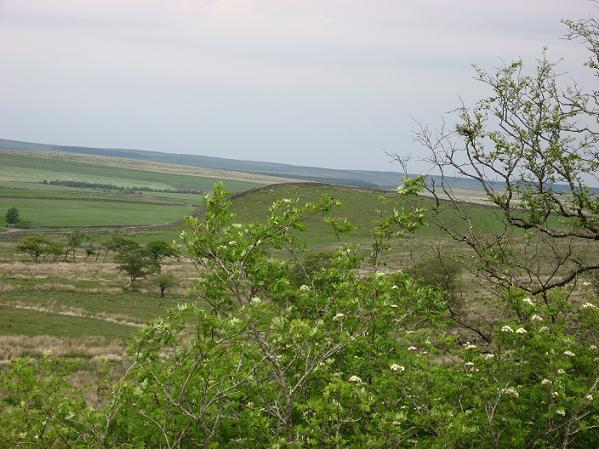 Near Walltown Crags (the line on the ridge of the hill is the wall)
"Centurion, it gets worse. The last wine delivery is missing as well, and some of those sleazy looking tribal warriors with those funny beards carry knives and spears that look suspiciouly like our manufacture ware."

"What?!" Centurion bangs hand on wall. "Ouw. Gaius Numerius, are you saying that someone is selling army equipment to the enemy?"

"I'm not saying anything. I'm just telling what I've seen. Don't want to get into trouble."

"Don't worry. Someone else will get into trouble this time. Get back to your tent, there's no use sitting out here in the rain. But ... as soon as I've found those damn stones, I want to see some very busy legionaries." 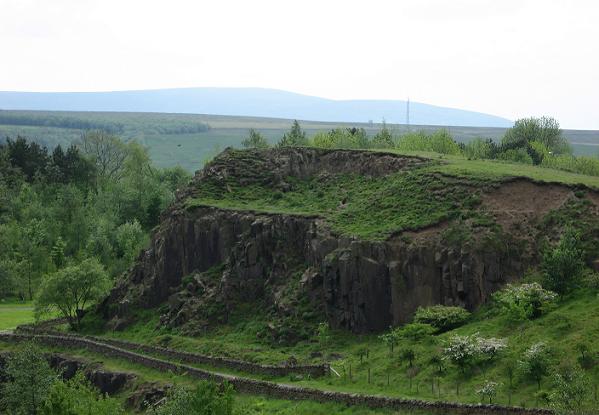 One of the Walltown Crags
Centurion leaves.

"What's that, did Titus Merula's girlfriend move back in?"

"I don't know. But let me tell you something, Gaius Numerius. There's one thing a centurion loves more than rasing hell for us legionaries."

"And what, Quintus Didius?"

"Raising hell for the civilian staff." 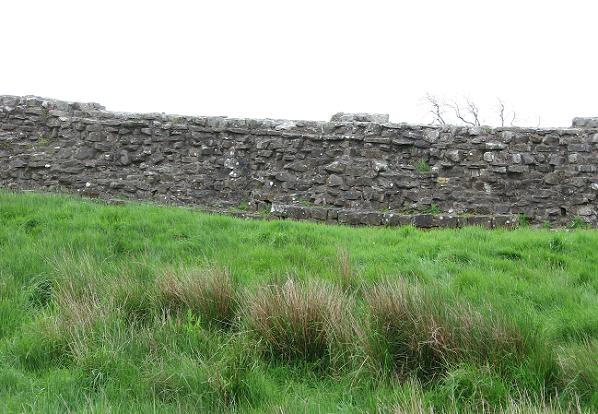 Wall at Birdoswald
"I hope he'll find the missing wine as well, not only those damn stones."

"Yeah, in the bellies of the staff and the tribunes. Spoiled brats, the lot."

"That they are. Well, let's follow orders and get inside, Gaius Numerius. There should be some beer left. And boar roast."

"Knowing our cook and his love for indigenous food, we'll end up with lukewarm cervisia and boar in mint sauce." 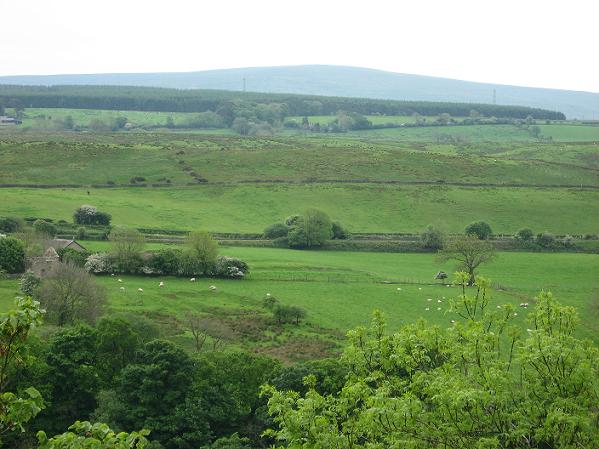 Mile castle near Birdoswald, view towards the fortress (to the left)
* Gaius Numerius is mistaken, of course. There are not only trees in Germania; we do have some vineyards as well.

Comments:
Great photos, Gabriele. It must have been hard work building the wall. I hope they found their wine. ;)


You have the tone just right, I can hear it.


Centurion. Marula: You believed your recruiter when he said nice weather and soft work in Britain?

Legionnaire. Numerius: Yes Centurion! he bought me some wine.

Great pictures. Those are some big plot bunnies in that last picture, you can almost see their ears. :)

P.S. Still on the lookout for The Bastard Prince, no luck yet though.

Thank you, Shelley, Hank and Ann.

Ann, that books seems to be more difficult to find than a pirate's treasure. ;)

Great pictures. Weren't some of the Wall garrisons recruited from German units? No doubt they'd have preferred olive groves and dusky maidens but at least they should have been used to the rain :-)

Trouble is beer is blowdy awful without some hops to flavor it. Maybe some of those Bavarian auxilliaries could plant some, say, down around Lundinium.

Poor Numerius. Wasn't that the guy who was sold a nice vinyard on the south shore of the Rhine River?

Carla, yes, the Batavians garrisoned some Wall forts, but the forts and the wall were build by legionaries. Somehow the army didn't trust the auxiliary with the job.

Stag, they got Celtic beer, which I assume came from Belgium. :)

Love the pics! Oh, those poor soldiers from warmer climes. How they must have suffered! :)

Poor dudes. Life in the military doesn't seem to have changed much over the years...

Thanks, Alianore and Bonnie.

Lol yes, the Hadrian's Wall (or the German Limes, for that matter) was not on the preference list of most legionaries, I bet. But some of them managed to adapt pretty well and even stayed in the area after retirement when they got a bit of land to settle on (a larger bit in less populare countries).

Hi! I followed your link from the 2YN board on FM.

Nice photos! It's been a few years since I went to Hadrian's Wall but these pictures brought me right back... :)

Hi Lena, welcome to my blog. I saw you on the 2YN forum - so people actually do click the link in my signature? Nice to know, since I love to share my photos. :)

Awesome photos, Gabriele. I've read quite a bit on Hadrian's Wall and been there once ages ago in 70. Its quite the sight.

It's a great place, Barbara, isn't it?