16 Jan 2010
Hanstein Castle - The Next Generations
This is a continuation of this post. Castle Hanstein had started crumbling, and in October 1308 the brothers Heinrich (another one *sigh*) and Lippold of Hanstein signed a contract with the archbishop Peter of Mainz, stating that they would "build a new castle of their own means, the basements of stone and the upper storeys of wood, and they would not hold any other rights to it than their male descendants being bailiffs and lords of the castle." (1) In case the lords of Hanstein died out in the male line, the castle would fall back to the archbishop. 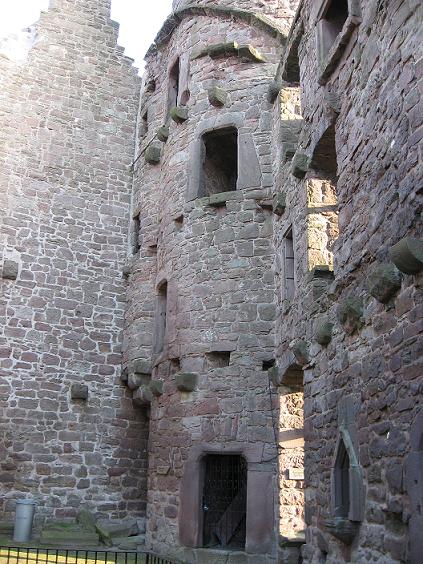 The archbishop would pay an annual fee of 20 mark silver for the garrison of the castle who'd pay hommage to the archbishop of Mainz as their overlord but also swear fealty to the lords of Hanstein. That is one of the many examples of mixed loyalties in the feudal system that could lead to problems. It didn't seem to have happened in case of the Hanstein retainers, but there are other examples.

The Hanstein family had large possessions in the surroundings and grew more wealthy. Soon they not only paid hommage to the archbishop (later Prince Elector) of Mainz, but also to the Landgrave of Hessen, the bishop of Fulda and others of whom they held lands and rights. It was a particularly explosive corner because so many different grand feudal lords had lands and interests so close to each other. Even today the area marks the corner between the counties of Hessen, Lower Saxony and Thuringia.

Those feudal lords were feuding with each other more often than not, and things got increasingly messy, with the lords of Hanstein in the middle of it several times. Speak about conflicting loyalties here. Contracts about armed assisstance and neutrality were signed and broken, and the lords of Hainstein got quite a reputation. Robber barons (Raubritter), some called them, though they were not the only familiy that tried to make the best out of the strifes that tore Germany in the Middle Ages.

In 1415 the Landgrave Ludwig of Hessen built a castle of his own on the other side of the Werra river, in sight of the Hanstein. It is called Ludwigstein and today houses a youth hostel. The 'my castle is bigger than your castle'-syndrome, I guess. :)

Hanstein Castle must have suffered during those feuds, and repairs are mentioned several times. In the 15th the walls were strengthened and room made to get the cattle and peasants inside for safety. 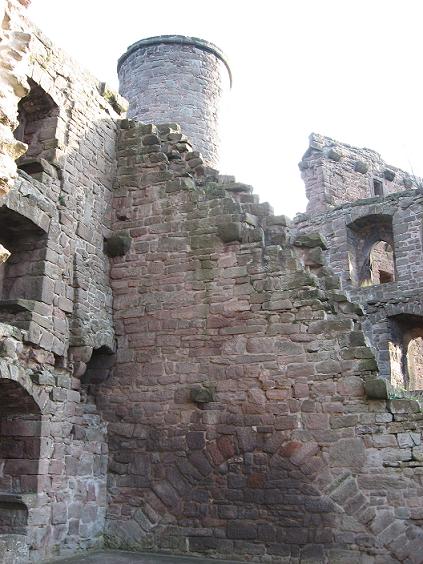 But the methods of warfare changed with the invention of gunpowder, and the hilltop castles no longer proved safe and had long since ceased to be comfortable. The ever expanding Hanstein family moved to their manors in the lands around the castle, and in 1683 Hanstein Castle was officially abandoned.

The castle fell into ruins until members of the extended family started some repairs and built a hall for family meetings in 1840. During the Cold War, the castle was closed to the public; a listening post was set up on the hill. After the reunion, the castle was repaired and reopened for the public and is now a popular - albeit luckily not yet overpopulated - destination for hiking tours and Sunday outings. There is an annual Mediaeval festival and the castle has been used as film location (some scenes of the TV miniseries Der Medicus, based on Gordon's novel The Phyiscian, were filmed in the castle).

The photos show details from the palas building of the castle.

More photos can be found here.

Comments:
The stone is not so warm and inviting as your previous pictures of this schloss. The upper windows make a remarkable "moaning" face though....

Stag, the sun was already low and didn't reach the inside of the castle on a cold November afternoon. Probably one of the reasons the lords of Hanstein looked for more comfortable manors in the valleys. :)

The difference is not as pronounced. There are dialects but not different languages (like Welsh / English), religious differences between Catholics and Protestants don't play a role today (though they did in history). If you go further back to the times of say, Charlemagne - but that would put it before the Hanstein was built - the Saxons were not yet part of the empire, pagans and with different customs. They still were a troublesome lot under the Salian emperors in the 11th century. But today it's mostly jokes about each other's particularites. ;)

Aha, I remember this castle - the one with the vertigo-inducing towers! Lovely.

As I teach a sword fighting class, I am working with Hans Talhoffer's book on swordfighting...it is apparently written in medieval Swabian. Fortunately, it is profusely illustrated. None of my German speaking friends can make head nor tails of it, but surprisingly enough, when I was in Zurich some three weeks ago, a young Swiss man was quite struck by the similarities between antique Swabian and formal modern Swiss. Go figure!

Ah well, I tried to read Gawain and the Green Knight in the original "Anglich" last month, and gave it up as a bad job. So I understand the difficulties.

Stag, Swabian and Swiss German both have Alamannic roots, so it's not surprising that they are pretty close. Some dialects can be tricky (lower German is VERY different from the high German taught at school) but they are still but dialects, not different languages like English and Welsh.

So it's not always engineers that cause places to fall down. :) I wonder who did all the upkeep on those places? Do you have an engineer on staff? Or just a really talented janitor? Must be hard, a few generations down the road, to repair other people's projects.

It certainly was a complicated political situation back then. And without newspapers, TV or internet the spies must have been busy checking out who was about to feud with who so that they could warn their masters in time about any conflicts of interests! Must have been a headache!

Lol no, sometimes it's just time that causes a building to fall into disrepair. I'm not sure about castle owners like the Hanstein family, but the large noble families and kings often had their own master mason and architect, like Master James of St.George who worked for Edward I and built all those big castles in northern Wales. I suppose the smaller families at least had masons to take care of immediate repairs and might have hired a master for the actual construction.

Jules, yes, it probably was a good time for spies. :) But warfare also was more formalised and there would have been things like declarations of war, negotiations with the parties involved and all that (1). Plus, you actually had to go and get your catalpults in front of the enemy's castle, there was no red Launch Missile button.

(1) The German historian Gerd Althoff specialises on the formalisation and 'demnostration' in Mediaeval politics, and it seems most conflicts, even armed ones, have been more like a chess game

Are the stones really pinkish or is that just a trick of the light?

Fascinating post, as ever. It must have been almost impossible to know which way to jump with all the conflicting loyalties, so you might as well apply the what's-in-it-for-me principle.

They have a slighly pinkish hue, Bernita.

Carla, indeed. And since the castle and other lands stayed in possession of the family until the Russian occupation past WW2, the Hansteins must have been pretty good at the game.