14 Nov 2010
The Kugelsburg - Part 3: War and Decline
I've already posted about the history of the Kugelsburg here and here. This will be the final post, a little coda to the fascinating history of that castle and its role in the tapestry of local and sometimes larger scale politics. 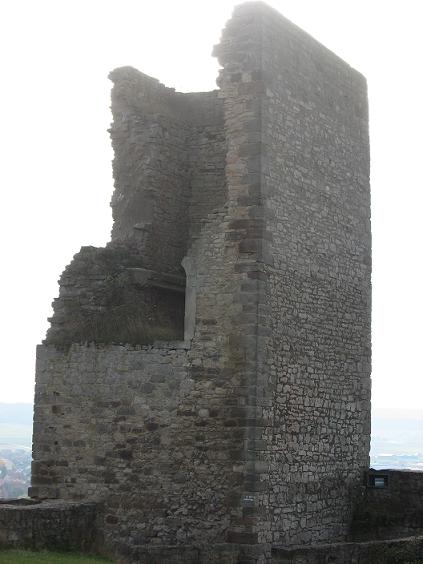 Corvey renounced all rights to the castle in favour of the Electorate of Cologne in 1507, and the Electorate would remain in possession of the Kugelsburg until 1803, at least theoretically because wars led to occupations a few times.

The Kugelsburg played a role in the Thirty Years' War. This is interesting insofar as there are no signs of 'modern' additions and changes to the castle to cope with cannons and other advanced siege technology. We know such additions from some German castles (fe. Regenstein). The Catholic general Tilly sent a troop of Bavarian mercenaries to reinforce the garrison against the Protestant army led by Christian 'the Mad' of Brunswick in 1622. His recklessness as military leader didn't help Christian, though, he lost a decisive battle and had to flee deep into Protestant territory in northern Germany where he died at the age of 27. The Kugelsburg garrison was replaced by Imperial troops, also Catholics - or at least mercenaries following that side.

Ten years later the war moved back to the area, and this time an army of Landgrave Wilhelm of Hessia, ally of the Protestant leader King Gustav Adolf of Sweden, plundered the town Volkmarsen and destroyed some of the castle's defenses. But in 1637, the Imperial forces were back in Hessia, ousted Wilhelm from his lands (he had to flee into exile), and mounted a punitive expedition that destroyed several towns, settlements, and castles. The Kugelsburg escaped that new wave of war, though. Maybe there wasn't much of a garrison left in the partly destroyed castle to attract a siege force. 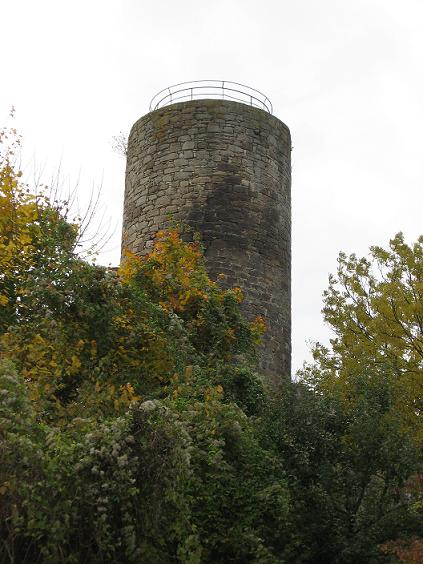 The next war that affected the - obviously repaired - Kugelsburg was the Seven Year's War (1756 - 1763) between Prussia and Great Britain / Electorate of Hannover on one side and an alliance involving France, Austria, and Russia on the other side. The castle was occupied and partly destroyed by French troops in 1758.

With the ... ok, take a deep breath first .... Reichsdeputationshauptschluss (Principal Conclusion of the Extraordinary Imperial Delegation) of 1803, Volkmarsen and the Kugelsburg came to Hessia-Darmstadt. This last set of laws of the Holy Roman Empire before its dissolution in 1806 besically redistributed some of the land in Germany which was splintered into a tapestry of small states with some larger ones (Prussia, Hannover, Hessia, Saxony fe.) thrown in. Now the smaller realms were annexed by the larger ones with their sovereigns retaining some rights. Towns with imperial immediacy lost that (with the exception of Hamburg and Bremen which until today are counties in their own right), and the possessions of the Church were secularised - that was why Cologne finally lost the Kugelsburg to Hessia.

The Kugelsburg fell into ruins and was bought by the town of Volkmarsen in 1885. First measures to prevent further decay date back to that time.

What remains today are the square keep dating to the 12th century, the early 14th century round keep, several walls of the Gothic palas , the staircase connected to it, and most of the inner curtain wall. The outer defenses are lost except for traces of the trench between inner and outer bailey and a few layers of stone of the outer curtain wall. 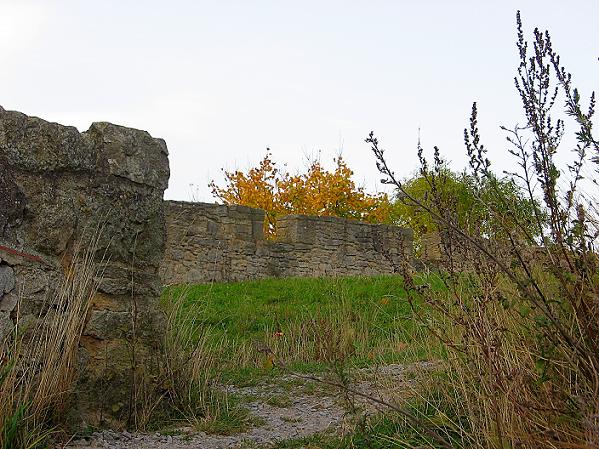 The cellar of the palace, called Witches' Cellar, is accessible, but I didn't go down because it was obviously used as toilet by a fox or something. Or maybe it was the rotten bones of a witch that caused the stink, lol.

The castle is a local tourist attraction with a restaurant in the former outer bailey.  ¶ November 14, 2010

You sure you had nothing to do with it? :D

Germany is a beautiful country. I hope to someday travel there. :)

A long and colourful history :-) Lovely photos, especially the first one with the view over the plain in the background. You must be able to see for miles from the castle (which of course is the idea).

Carla, of coure it's the idea. You need to see Constance and her trebuchets coming. :)

Though I'm not sure what to do about it, except maybe set s bunch of corgies loose to distract her corgies so she'd be busy hunting her dogs instead of throwing rocks at towers.

This music was inspired by the Kugelsburg Castle. !!

Thank you for the link, Ricardo. That's a cool piece of music.

I visited this castle a lot of times... but I doesn't know anything about it.
Thanks!!!