18 Jan 2013
Russian Splendour - The Isaac's Cathedral in St. Petersburg
While I'm waiting for a book about the history of Göttingen that should put some light onto Otto of Braunschweig-Göttingen (Otto the Quarrelsome) for a post about him, here's some more Russian shiny stuff for you to enjoy; some photos I took of and inside the Isaac's Cathedral - Isaakievskiy Sobor in St.Petersburg. 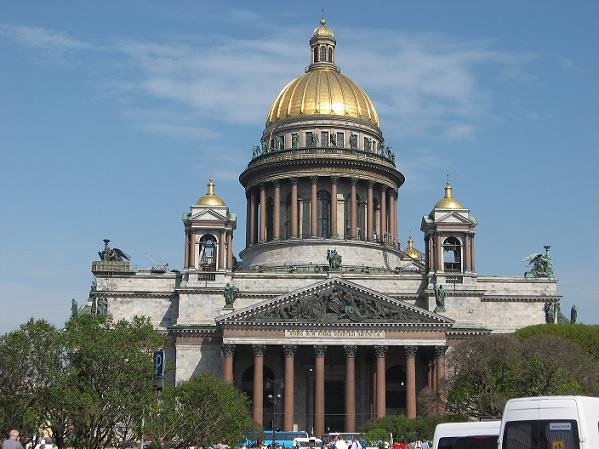 Let's start with some numbers for Constance. *grin* The cathedral is one of the largest sacral buildings with a cupola to be found in the world. It's 111 metres long, 97 metres wide and 101.50 metres high; the diameter of the cupola measures 26 metres. The interior encompasses 10,767 square metres and can hold 14,000 people. When I visited it, it looked like there were almost that many tourists. 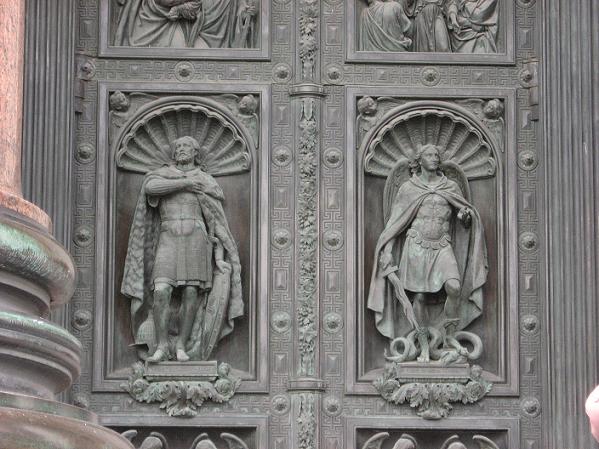 Detail of one of the bronze doors
The cathedral, which is officially called Cathedral of the Holy Isaac of Dalmatia, was commissioned by Tsar Alexander I to commemorate the victory over Napoleon. It replaced an earlier church - the fourth in line on the site. The oldest, a timber building from 1707, was built by Peter the Great and dedicated to the saint that shared his birthday. 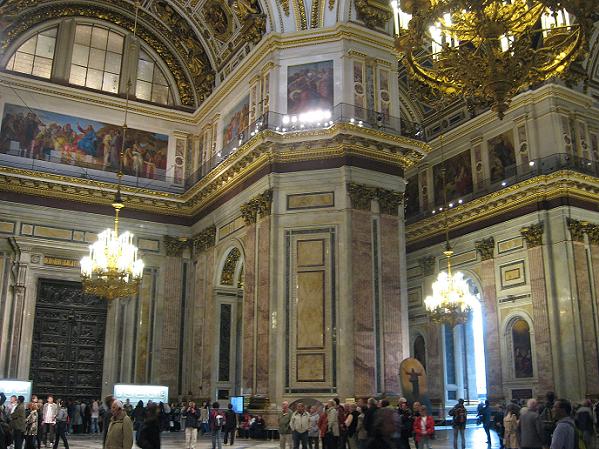 Isaac's Cathedral, interior
There was a special commission to decide on several designs submitted by architects, but in the end Alexander pulled the tsar, and his favourite, Auguste de Montferrand, won. The cathedral took 40 years to construct, from 1818 - 1858; interrupted several times because of static problems (ok, then there's still hope for the Berlin Airport). 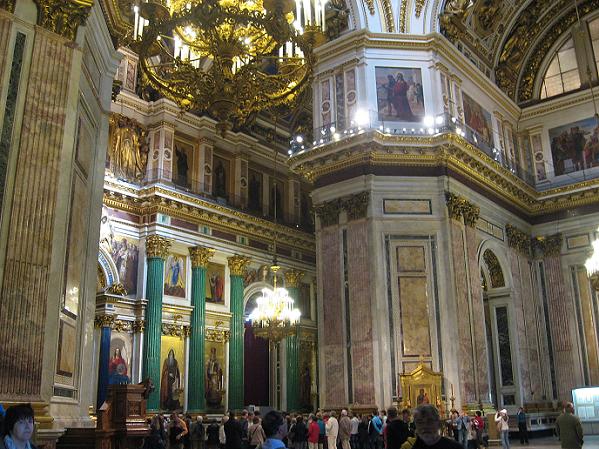 Interior, view towards the iconostasis
It was not easy to take photos while staying close enough to my group not to lose them in the whirl of people and trying to avoid having a clutter of tourists on every pic, but I snatched some decent ones nevertheless. It's the disadvantage of group tours but without that I would not have gotten around in Petersburg in the first place. I visited the other towns on the cruise on my own, though. 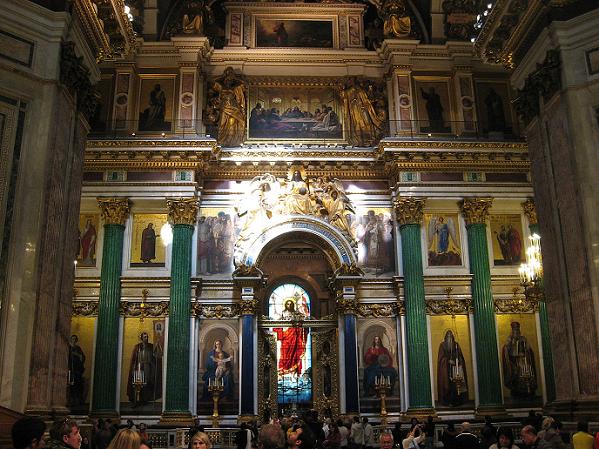 Iconostasis, closeup
The splendid interior is dominated by ten huge columns of malachite; the floor, pilasters and other decorative elements are sculpted from various sorts of marble and granite from all over Russia; the walls and cupola are decorated with semi-precious stones, gold, and even gemstones, as well as large frescoes and mosaics by famous Russian artists. The three bronze gates were designed by Lorenzo Ghiberti, the columns of the porticos in front of the doors are granite. 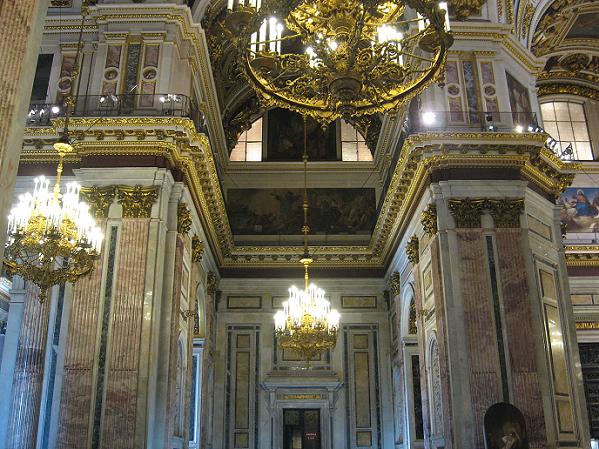 View into one of the side chapels
The main iconostasis is also framed by malachite and lapis lazuli pillars The icons in the iconostasis as well as the other ones spread aroud in the cathedral have darkened over time and I only got few decent photos. It was another disadvantage of the crowds, the lack to really contemplate the paintings. While all that gold and marble stuff is a bit overdone for my taste, some of the icons were beautiful. 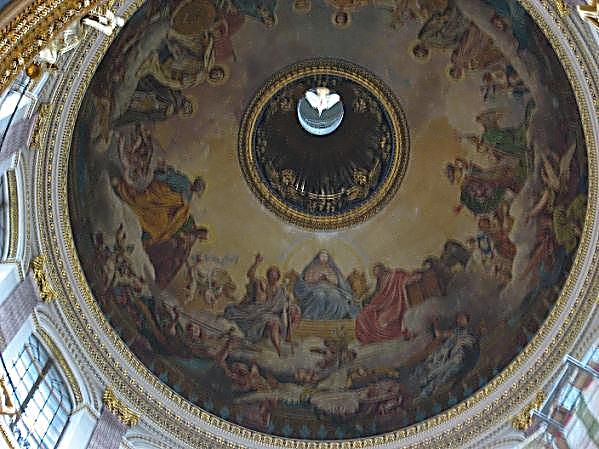 The cupola (slighly blurred because I was in a hurry)
During Soviet times, the cathedral became a Museum of Atheism, with a Foucault pendulum hanging from the main cupola. During WW2, it served as storage room for objects of art from the palaces in and around St.Petersburg. The dome of the cupola had been painted grey to prevent detection by German aircrafts; nevertheless, the cathedral suffered some damage but less badly than some other historical buildings. After the war, the cathedral was again reverted into a museum, this time about the History of Religion. 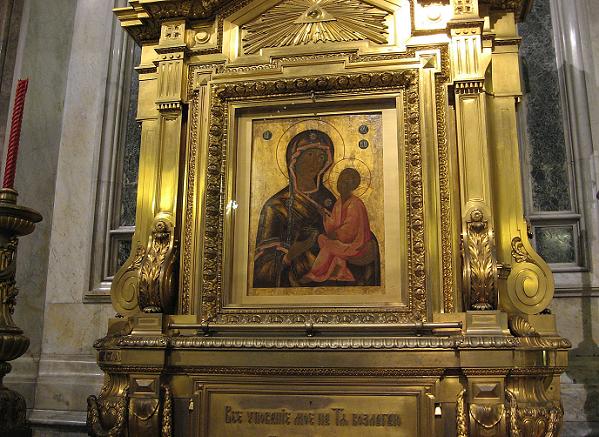 One of the icons
Today, the cupola sparkles golden in the sunshine again, and the interior has been renovated as well. The cathedral is still a museum, but no longer a themed one; it's simply the Isaac's Cathedral. It is still used for services on feast days, though.
¶ January 18, 2013

Comments:
Wow, that place is incredible! I so want to visit St Petersburg. :/

Kathryn, it's definitely worth a visit. Much has been repaired (though when the sighseeing bus had to take a detour through a less 'public' street you could see much still needs to be done). I esp. recommend a canal cruise.

Oohhh, thank you for the numbers Gabriele. It really puts it in perspective for me. Love the views you were able to capture. I've been in St. Peter's in Rome and felt really insignificant...

Russian splendour, indeed! What a magnificent building, and your photos are stunning.

For some reason there's something especially exotic about the idea of whole columns made of malachite. I always think of malachite as copper ore, rather than as a building stone in its own right. The columns look gorgeous.

Constance, I think St.Peter in Rome is even larger, and one feels small in the Isaac's Cathedral already. Though the effect is spoiled a bit by the many tourists.

Thank you, Anerje and Carla.

Splendid indeed - and also the subject of the next post, the Smolny Cathedral.