27 Jan 2013
Russian Splendour - The Smolny Cathedral in St. Petersburg
Cathedrals are among the architectonic highlights of St.Petersburg and so the bus tours through town try to cover as many of them as they can cram into 3 or 4 hours. One photo stop was at the Smolny Cathedral and Convent, a group of Baroque buildings that's actually not so overdone with gold and marble, but has a pretty white and blue colour scheme. 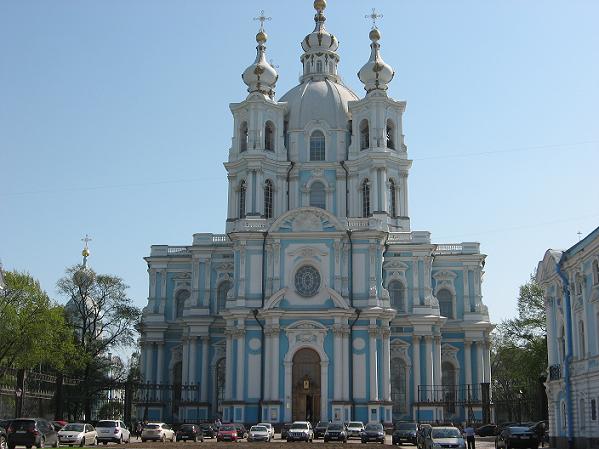 The convent, placed at a bank of the river Neva, was originally built as retreat for Elizabeth, daughter of Tsar Peter the Great, who had been excluded from succession to the throne. But when Ivan VI was overthrown by his own royal guards, Elizabeth became tzar and had a whole row of palaces to live in.

In former times, the place lay outside the city and was the site where pitch for ship building was processed; the name Smolny derives form the Russian word for pitch - smola. 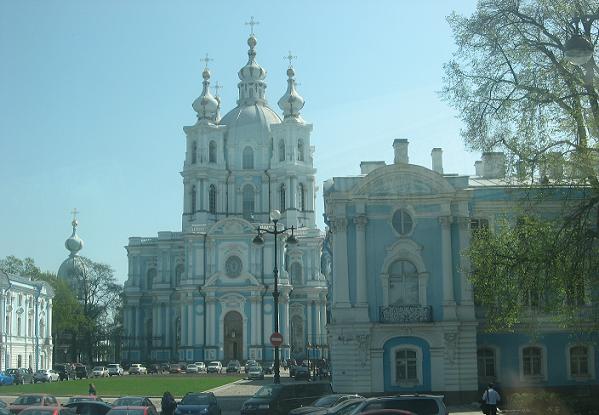 View of the cathedral and some convent buildings
This one was taken from out of the bus, thus the slightly green tinge. But I like the angle so I included it. You may notice the many cars on some of the photos - yeah, those are a pest in St.Petersburg. Six lane roads get blocked by them and there's always a concert of horn beeps. Though the main problem and bottlenecks are the bridges; not many of them can take major traffic, and Petersburg is criss-crossed by rivers and canals. 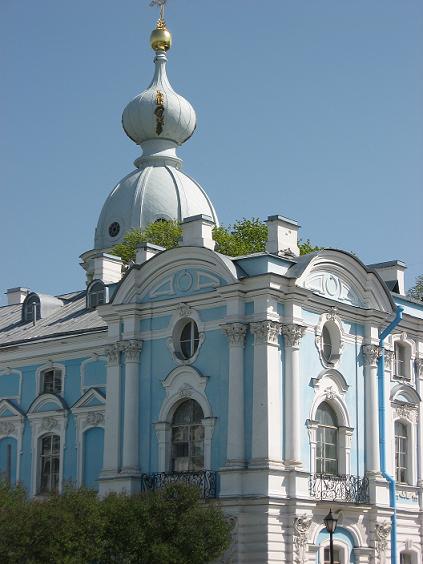 (one of the convent buildings; detail)

Work on the convent continued under Elizabeth's patronage, planned as combination of a Russian Orthodox nunnery and a girl's school which would become the first in the Russian Empire.

The convent was built by the Italian architect Francesco Bartolomeo Rastrelli (1700 - 1771) whose family had come to Russia while he was still a boy. The father had been invited to St.Petersburg by Tsar Peter the Great, and designed the Winter Palace (Eremitage), the Great Palace in Peterhof ouside town and the Yekaterisnky Palace in Tsarskoye Selo (today known as Pushkin), as well as some other Baroque buildings.

The son followed the father's footsteps. The cathedral and convent of Smolny were entirely his own project on which he worked from 1748 to 1764. But the cathedral was not yet finished when Elizabeth died in 1762.

Her daughter-in-law and eventual her successor (after her husband; Peter III, had been deposed and died under somewhat mysterious circumstances) was Catherine I. She did not like the Baroque style and so money for the cathedral project more or less dried up. Rastrelli could never build the bell tower he had planned and which was to be the highest tower in St.Petersburg, and the interior of the catherdral remained unfinished as well. Rastrelli left Russia in October 1763. 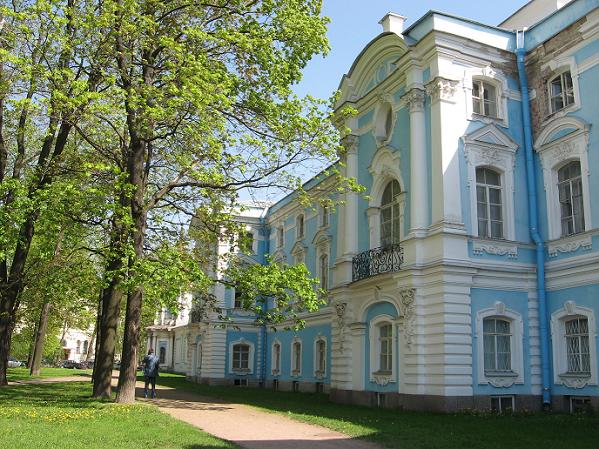 Some convent buildings seen from the outside
The cathedral itself had never been used and fell into disrepair. At the time of Tsar Nicholas I it looked so desolate that he commissioned Vassily Stasov, a Russian architect, to repair and finish the building; a task that was completed in July 1835, when the cathedral was finally consecrated. Stasov added some neo-classical features in the taste of his time, but those are mostly visible in the interior which we didn't get to see due to lack of time. 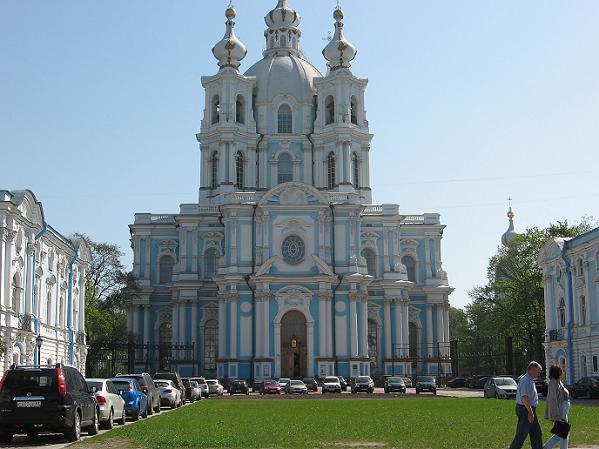 Another view of the cathedral
After the revolution, the church was deprived of its religious furnishings by the Sovyet authorities. The convent buildings became the city headquarters of the communist party. In 1982, the cathedral was made into a concert hall, a function it keeps until today. The other buildings now house government institutions and some faculties of the St.Petersburg State University, namely the departments for sociology and political sciences. So there's some continuity, in a way.
¶ January 27, 2013

Comments:
I would love to visit St Petersburg! Maybe one day.....

Me too, Anerje! Although I prefer Romanesque and Gothic this is impressive indeed!

"a pretty white and blue colour scheme" Yes, I agree - the buildings are very pretty. They have a sort of feminine look, rather appropriate if they were originally built for a princess.
Lovely photos, as always.

Thank you, Anerje, Kasia and Carla.

Kasia, I prefer the Romanesque and Gothic architecture, too, but I agree that St.Petersburg's Baroque and Classicist buildings are a splendid sight.