6 Oct 2013
More Hiking Tours on the Hoher Meissner
Well, the conference that kept me busy the last weeks is over; I got some time off to recompense the overtime, and because of the fine weather those last days, we did some more hiking. Here are some photos. 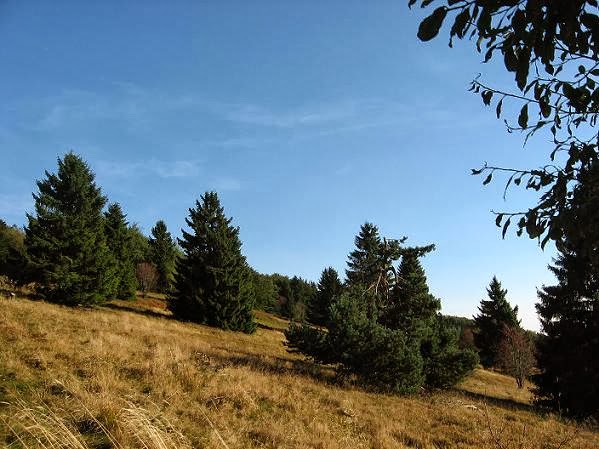 Pines on the High Meissner Plateau

We did some tours in and around the Hoher Meissner last year but there's more to explore. The highest part of the Meissner proper is not a peak but a plateau that rises up to 754 metres. The mountain itself measures about 8 kilometres (north-south) to 4 km (east-west). 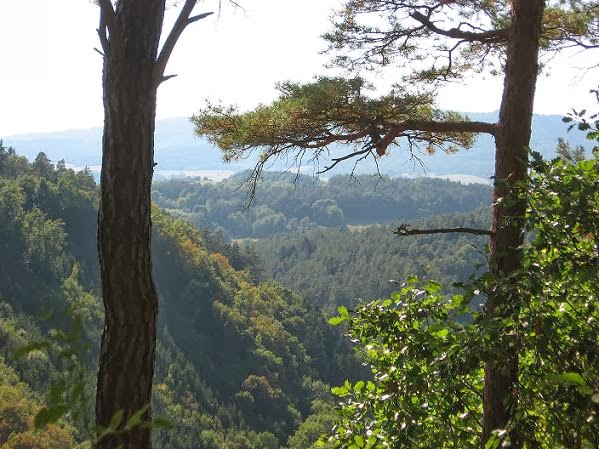 View from the Bilstein to the Devil's Valley
The geological history of the Meissner goes all the way back to the Variscan orogenesis about 350 million years ago, which is the foundation of most of the mountains in Germany (except for the Alpes). Traces of this stage can still be seen in the Devil's Valley (Höllental) with its 350 million year old diabase and greywacke formations. 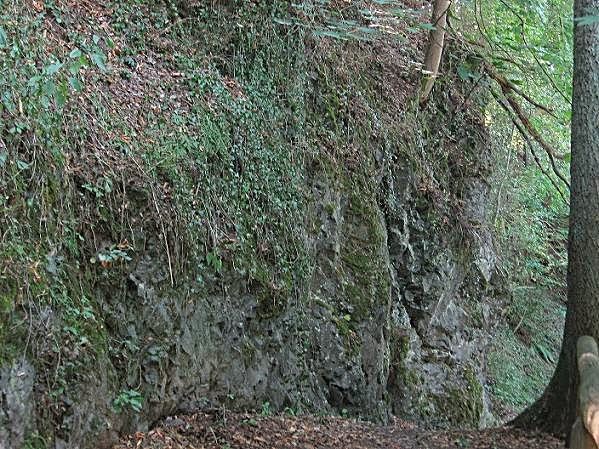 Diabase cliffs in the Devil's Valley
Diabase is an igneous (solidified magma or lava; diabase is actually formed at a state in between) subvolcanic rock that emerged from the earth crust in underwater conditions. Greywacke is a very hard sandstone with an irregular structure and badly sorted inclusions of feldspar, quarz, and small pebbles. Both rocks are typical for the Variscan orogenesis. 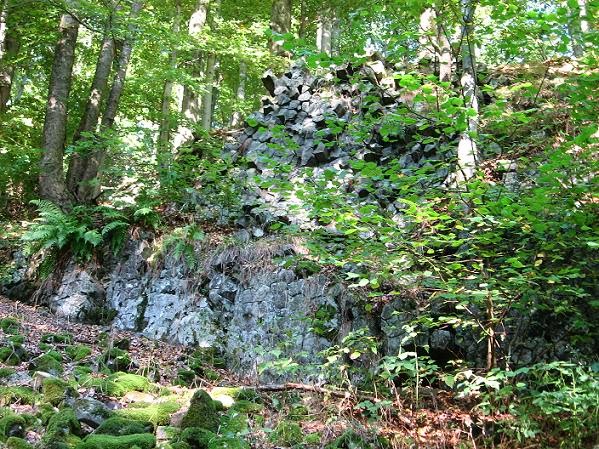 Basalt pillars in the Kitzkammer
Remains of the 250 million year old dolomite cliffs of the Zechstein Sea can be seen in the foothills to the north, but the rest of the geological development of the Meissner is much younger.

The uppermost layer of the main massive consists mostly of basalt from the early Miocene (23 - 5.3 million years ago), the beginning of the series of ice ages. Additional surface changes came about in the Pleistocene (2,588,000 to 11,700 years ago) mostly by glacial shifts which left behind basalt boulders on the slopes, like the Sea Stones below. 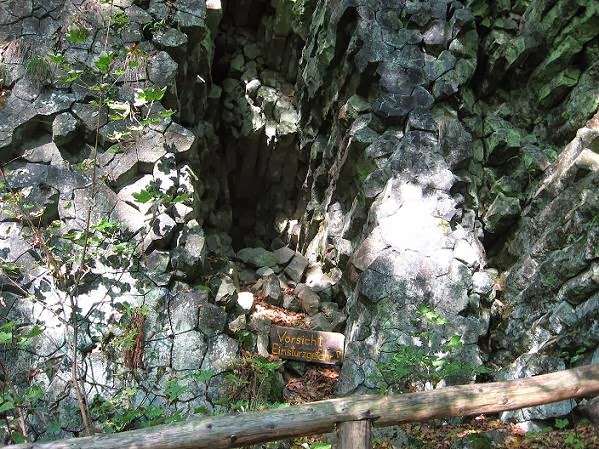 Cave in the Kitzkammer formation
The Kitzkammer, which looks a bit like a small version of the formations at Staffa, developed from sub-aquine volcanic activity. The pillars are an olivine basalt rich in glass. The sea levels in the early Miocene were higher than today. 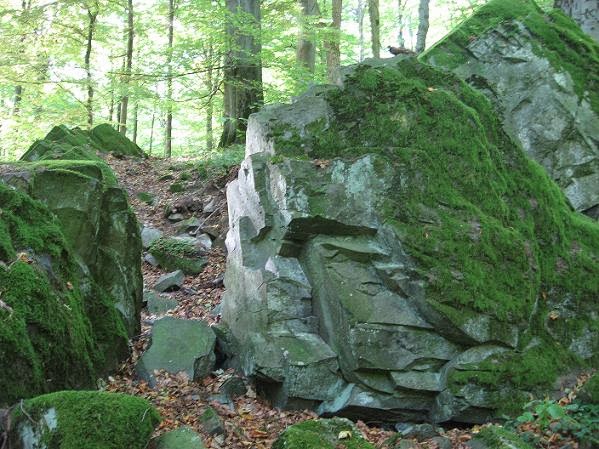 Sea Stone boulders (Seesteine)
The other interesting rock formation was likely caused by a landslide that deposited a group of bizarre basalt rocks at the southern slope of the Meissner, near a little lake that has fallen dry during the last century. They are called the Sea Stones. They are also olivine basalt though with a lower percentage of glass. 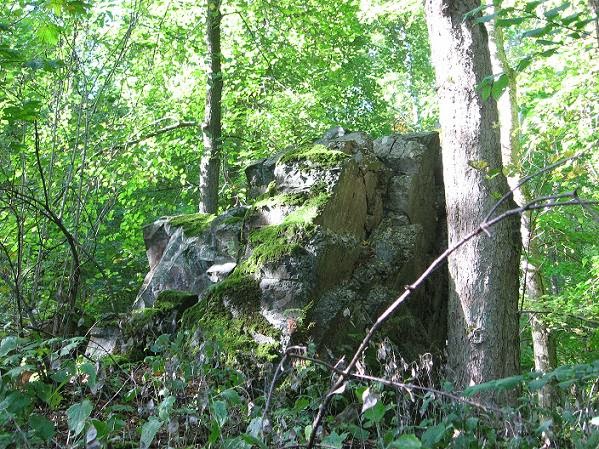 Another view of the Sea Stones
Under the layer of basalt lies a 12-15 metres thick layer of brown coal from the Tertiary, the remains of a drowned forest (see this post).

Another tour took us to a place called Heldrastein (Heldra Cliff). It is part of the various trekking routes in the Nature Park Meissner / Kaufunger Wald, but technically the cliffs (besides the Heldrastein there are two more) belong to the Werra valley. 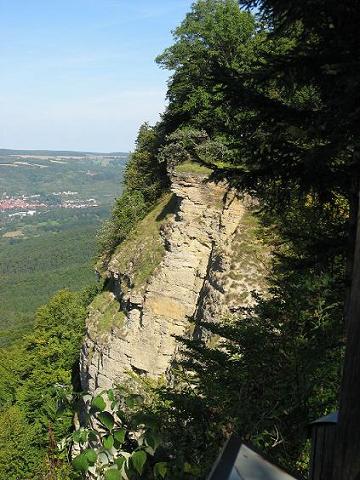 Part of the Heldra Cliff, the Chancel)
They are situated on the side of the former GDR and were a forbidden zone for both sides because there was a lot of spying equipment around, including an ugly tower we could see every time we drove on the other side of the Werra (which belonged to West Germany). Now the tower has been prettied up and can be used as viewing tower. Though after the steep ascent - partly by stairs - we didn't feel like climbing more of those, and the cliff itself offers a spectacular view already. 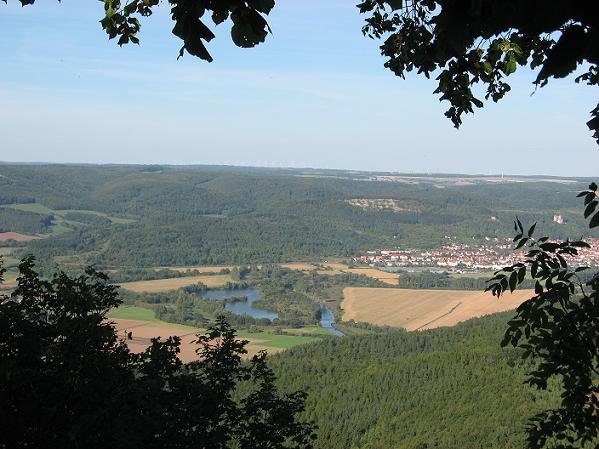 View from the Heldra Cliff
The Heldra Cliff (503 metres above NN) and its neighbours are another result of the musselkalk formations in the area. The sheer fall of the cliff is 62 metres - no wonder you need stairs to get up to it, even from a less steep part - and then the hills go another 330 metres down to the Werra river. 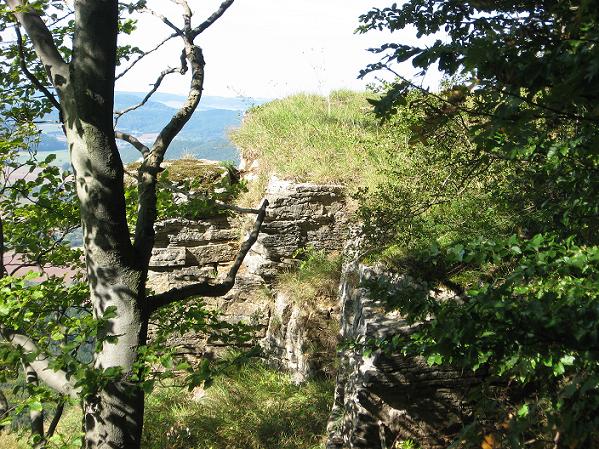 Way to the cliff
It was a warm day, too, so the cold beer I got in the hut on top was well deserved, I think. 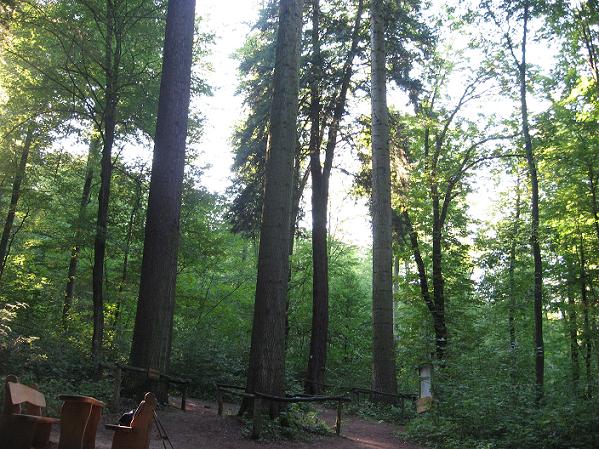 'Giants of Nieste'
Next were some wayward trees from North America and Canada that found their way into the woods near a village called Nieste, a fact that gave them the nickname 'Giants of Nieste' (Niester Riesen). The story goes that they helped the devil who, of course, supported Otto in his feud with the landgrave, and were turned into trees by the good spirits of the forest.   ¶ October 06, 2013

Comments:
I like the views, they remind me of the Big Horn Mountains here in Wyoming. Glad you did your rock hopping to bring us interesting pics. :)

Most of my readers seem to like rocks better in the shape of castles and cathedrals, but I find the wild ones cool, too. :-)

Hope the conference went well!
The basalt pillars at the Kitzkammer look amazing. I thought of Staffa and the Giants' Causeway even before reading your caption.