7 Jan 2013
Border Castles and Conflicts - Castle Sichelnstein
Like most other minor castles I've posted about, the beginnings of the Sichelnstein are shrouded in obscurity and some names that may have been local legend rather than historical. The Saxon nobles Asic and Billing mentioned in Carolingian chronicles (811, 813), who fled from their own people and established local holds in the Frankian lands between Kassel and Göttingen, can not be connected with the later Sichelnstein family (or many of the others they are connected with on a certain website). A Hiddi and a certain Amelung - both Saxon nobles - who are connected with the foundation legends of the castle are obscure persons as well. 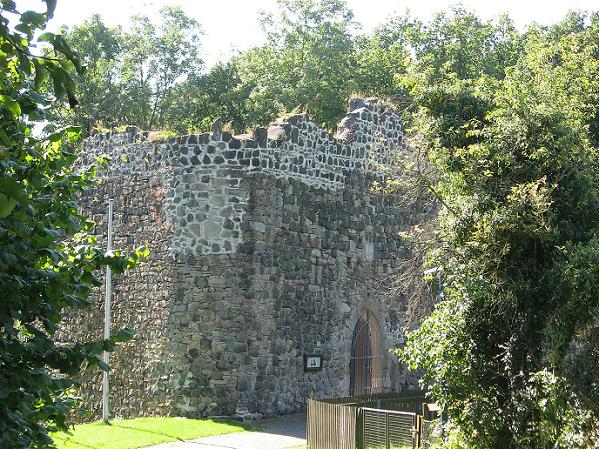 The first person we can trace with more surety is one Wittilo who is said to have fought bravely at the Battle of Riade against the Magyars in 933. King Heinrich I rewarded Wittilo by granting him the Sichelnstein as fief, and dubbing him. This incident is a bit curious. One possible interpretation is that Wittilo was a ministerialis, a member of the legally unfree but still high ranking men serving in administrative functions at the royal court and as heavy cavalry in war. Many ministeriales held fiefs to pay for their armour, but with less rights than freeborn nobles held their lands. Heavy cavalry secured the victory at Riade which would have given Wittilo his chance to shine. An additional dubbing ‒ if it is a realistic scenario; it's a bit too early for an established ceremony ‒ could have meant that Wittilo gained the status of a freeborn knight. In that case he likely took his name of the castle from that time on. The feudal relationship was renewed under Otto I after Heinrich's death in 936, which means the fief was not allodial. 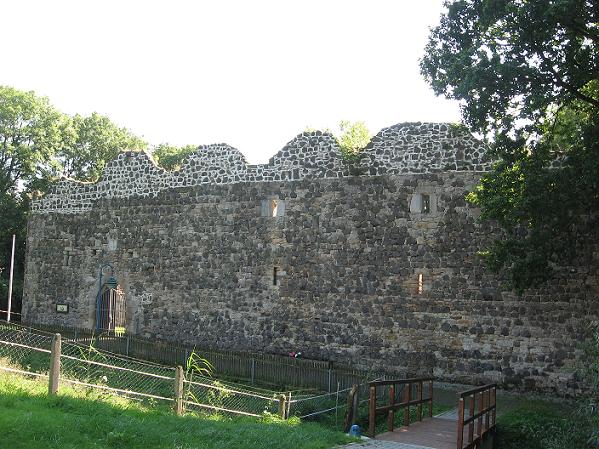 Sichelnstein, east wall with door
The castle would not have been the present stone-walled building, but fortified by an earth wall and timber palisade, though the trench may have existed already. The houses were likely half-timbered; perhaps on stone foundations.

For some time, the Sichelnstein family seems to have been vassals of House Billung. After the death of Duke Magnus, part of the Billung lands came to the Welfen by the marriage of Magnus' daughter to Heinrich IX 'the Black' Duke of Bavaria (ca. 1100).

The Sichelnstein family has left a few traces in chartes, several of them issued in Corvey monastery, so there may have been a connection (probably younger sons ending up there). When the empress Kunigunde, wife of Heinrich II, founded the Benedictine abbey in nearby Kaufungen in 1017, one Bardo of Sichelnstein was among the witnesses. Today, Kaufungen lies in Hessia, but at the time Hessia didn't exist as political entity (the landgraviate of Hessia was created in 1292). 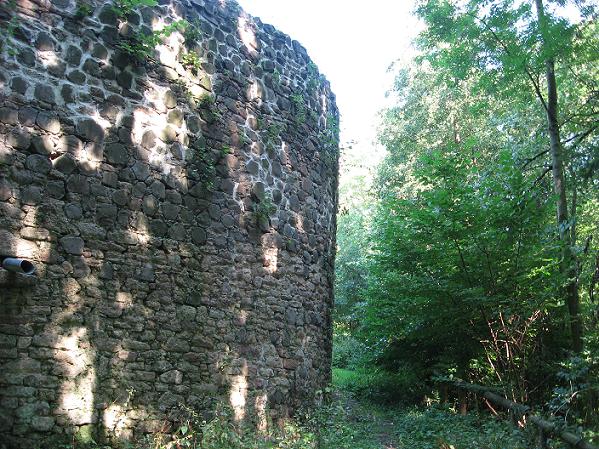 Walk along the northern curtain wall
The next member of the family we can trace is a Count Bardo of Sichelnstein who had to answer at the diet of Fulda in 1189 for killing his wife. The diet was held by King Heinrich VI who made his peace with the exield Heinrich the Lion; Duke Heinrich was allowed to return to Germany, and the allodial possessions of the Welfen were returned to him. That included the Sichelnstein. It would imply that the castle either never was elevated to an allodial possession or that Bardo forfeited the allod for his crime, and it fell back to Heinrich the Lion.

Bardo of Sichelnstein was condemned to death, but King Heinrich pardoned him to stay prisoner at the monastery of Corvey.

The next, and final, mention of a Sichelnstein is the death and burial in the Wahlshausen monastery of one Count Bardo in 1239. It migh have been the wife killer, or his descendant; another detail I could not trace down. The church of Wahlshausen in the Fulda valley still exists. 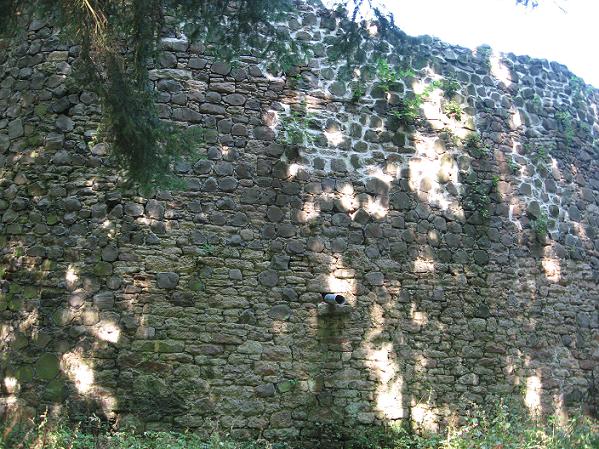 Sunlight sparks on the curtain wall
The Sichelnstein lands were still in possession of the Welfen family in 1372, when Duke Otto I of Braunschweig-Göttingen (our friend Otto 'the Quarrelsome') who had inherited the patchwork of Welfen lands in Lower Saxony, fortified the castle during his war with the landgrave of Hessia. Otto's mother was the daughter of Landgrave Heinrich II of Hessia who left no male heirs in direct line, so Otto claimed the lands. But so did several others, esp another nephew of the late landgrave Heinrich, and war broke out. Otto lost that war.

The Sichelnstein remained in Welfen hands. 1379, it was given to Otto's second wife Margarethe of Berg as dowry and widow seat. Margarethe survived her husband who died in 1394, by almost 50 years and lived most of the time in Castle Hardeg, but she visited the Sichelnstein a few times. 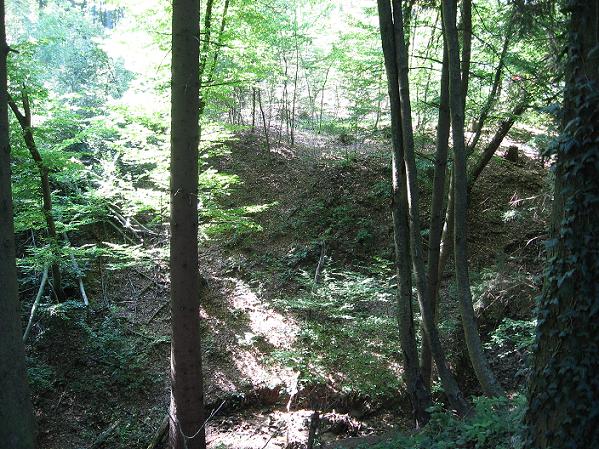 The trench at the western side
Later, the castle came into possession of the landgraves of Hessia. Maybe Otto's successors sold it or pawned it out; money was pretty tight in that branch of the Welfen family. It was probably damaged during the Thirty Years War and then abandoned, like so many other castles. Later it was used as quarry by the surrounding villages where you can hunt the stones in various old buildings.

Today only the lower part of the curtain wall remains, which is still a formidable sight. The interior contains the set up of a wooden stage and can be protected by a canvas roof; the castle is used for concerts in summer. 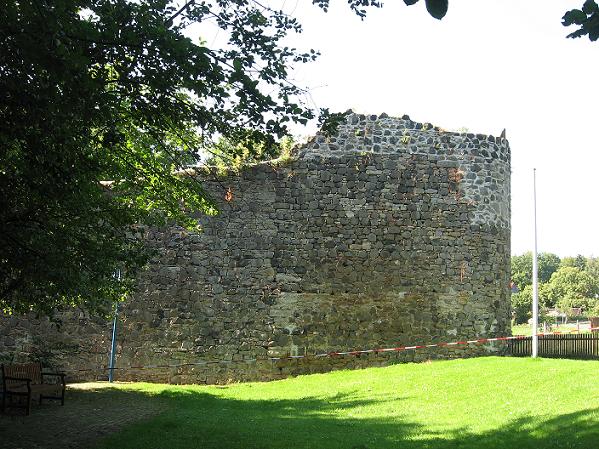 Seen from the south-west
The castle had once been surrounded by deep trench and only accessible via a drawbridge that lead to the only gate in the east wall. Parts of the trench can still be seen at the western side of the castle; it looks difficult to get across.

The groundplan of the castle shows an unusual horseshoe shape with the eastern side being straight and the western front curved. The curtain wall, built of basalt stones from the nearby Staufenberg Hill, rises to 7-10 metres. Since it has no windows and the first traces of holdings for beams and a fireplace are at 10 metres heigth, the castle must once have been much higher, probably with half-timbered buildings like a palas sitting atop the stone walls like in this example (Falkenstein Castle in the Harz Mountains). Whether or not there had been towers can't be said for sure, but there likely was a battlement at the level of the stone walls since there are remains of arrow slits in some places. 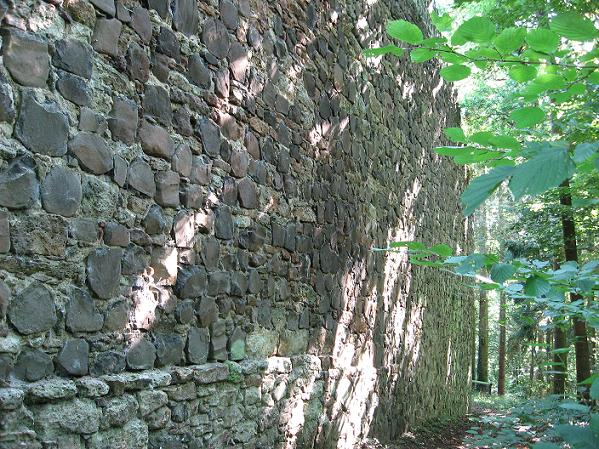 Another view of the walls
The Sichelnstein was not a very large castle, but obviously strong enough to serve Otto the Quarrelsome as basis for his war with Hessia, so it must have looked more forbidding once, and you could cram a garrison inside if the men weren't wild about comfort.

Since the door was locked I could only peek through the grille to get a view of the interior (which was a bit messy, with a makeshift stage and a bunch of folding chairs). The orginal height may have made up for the limited ground space.