7 Jul 2019
Richmond Castle - Later History of the Castle and its Architecture
I've detailed the history of Richmond Castle in the context of the Honour of Richmond in two posts (here and here). But with some more photos and information left, there is material for a final post about the castle.

The later history of the castle is less glamorous, but Richmond is among the places that gained interest as picturesque tourist sites since J.M.W. Turner and other artists painted the ruins in the 18th and 19th century. It still looks quite picturesque today. 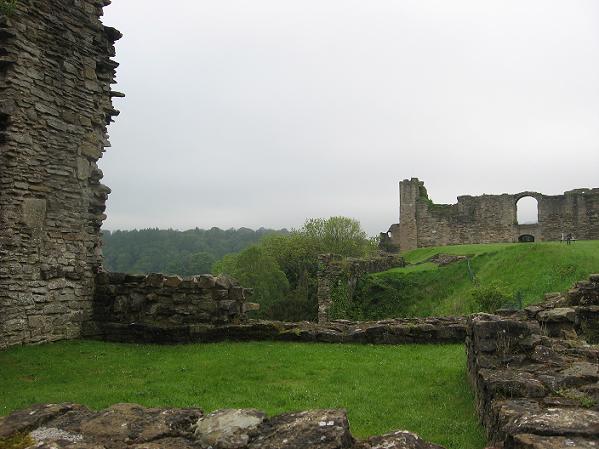 View from the cockpit garden to the castle

The castle was derelict in 1538. The third duke of Richmond carried out some repairs to the keep in the 1760ies. One of his successors leased the castle out to the army. They gave it to the New York Militia in 1855, who used it as their headquarters and built a barrack block against the western curtain wall. The keep was used as depot and another building set up beside the gate (that one still exists today).

Military use continued when the castle became the headquarters of the Northern Territorial Army in 1908 under the command of Robert Baden-Powell who later founded the Boy Scouts. Richmond Castle, curtain walls from the outside
During WW1, the castle served as base for a Non-Combatant Corps. Those were made up of conscientious objectors, conscripts who would not fight but contributed to the war in non-combat roles. They lived in camps under miliary discipline.

Some of those went even further and refused to be involved in any work connected with the war due to their belief. Sixteen of those were detained at Richmond in the building at the gate which formerly had serverd as armoury for the militia and was now changed into prison cells. They were sent to France in May 1916, charged under Field Regulations and condemned to death, but the sentence was commuted to then years hard labour.

The Victorian barrack block at the western curtain wall was demonlished in 1931. The roof of the keep was used as watch post during WW2, and the cells held prisoners of war. 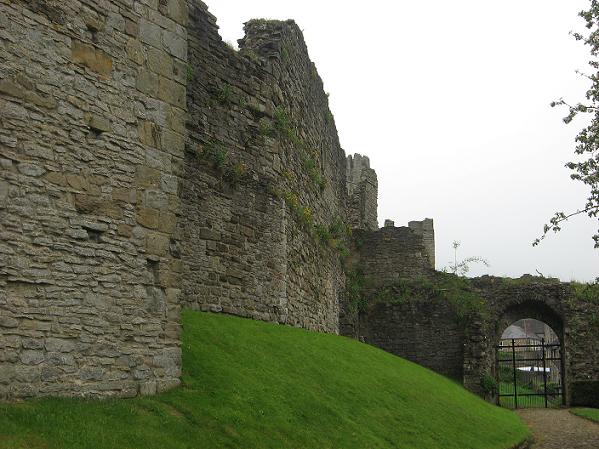 Curtain walls, different angle
The castle was given into the care of English Heritage in 1984. I was there on a dreary day with few other visitors around. Despite the grey sky, it proved a fine addition to my 'castle collection'. 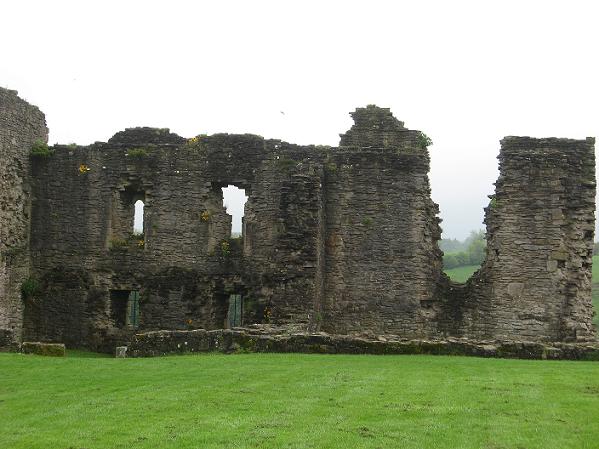 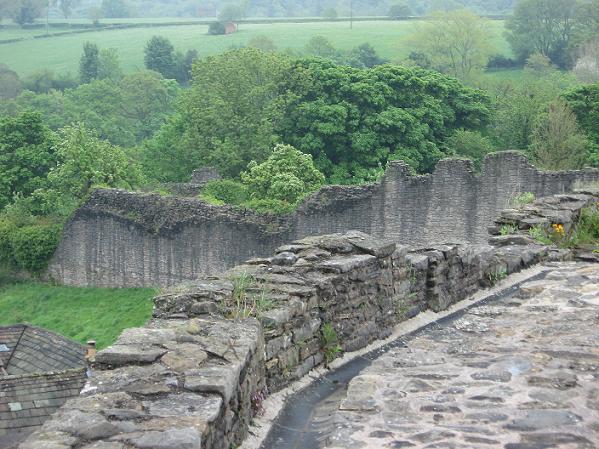 On the battlements (to the left is the curtain wall of the Cockpit Garden)
There had been a barbican and outer bailey in front of the main gate, but nothing remains of it. Another bailey overlooking the river on the other side of the caste is known as Cockpit Garden. Parts of its wall are almost intact. Today the place has been styled as Baroque garden, and it may have been used as garden already in the Middle Ages, providing the castle with vegetables and herbs. A door leading to it from the solar of Scolland's Hall could also point at the use of the garden as pleasure ground. 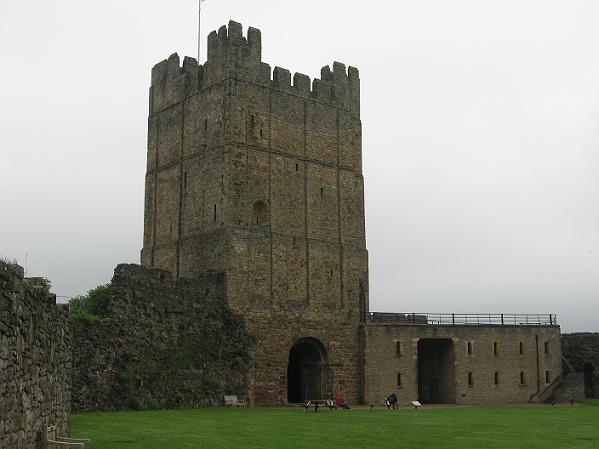 The keep (with the 19th century barrack to the right)
The most outstanding feature of Richmond Castle is the keep. Instead of the motte-and-bailey type which also is a Norman pattern, the keep of Richmond is a square keep (like Carlise or Bamburgh). It is topped by four square turrets. Three windows overlook the market place. They might have given access to a balcony where Duke Conan and his successors could have made public appearances. 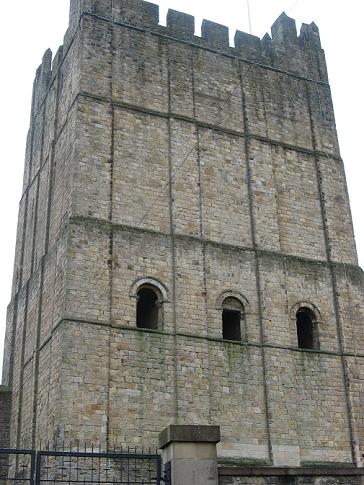 The keep seen from outside the castle (with the three windows)
The keep has been altered several times during the period when the castle was in use, but the main Norman features remain intact.

The first entrance to the castle was an arched gateway from the 11th century. Duke Conan built the keep over of it in the mid-12th century, and incorporated the gateway into the basement of the keep. You can see the different stones - Conan's masons used well-squared stones, while the older parts of the walls are made of mortared ashlar. 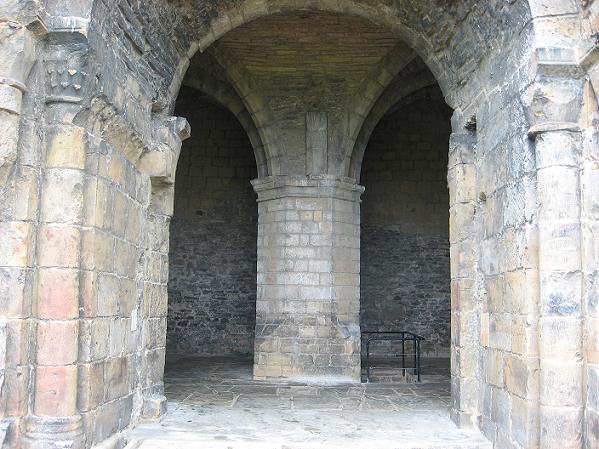 Basement of the keep
The next king to alter the keep was Edward I who liked a bit more luxury. He inserted a vault in the basement and a spiral staircase to connect the floors.

Today, the roof and floors have been restored and the keep stands to its originally 30 metres (100 feet). 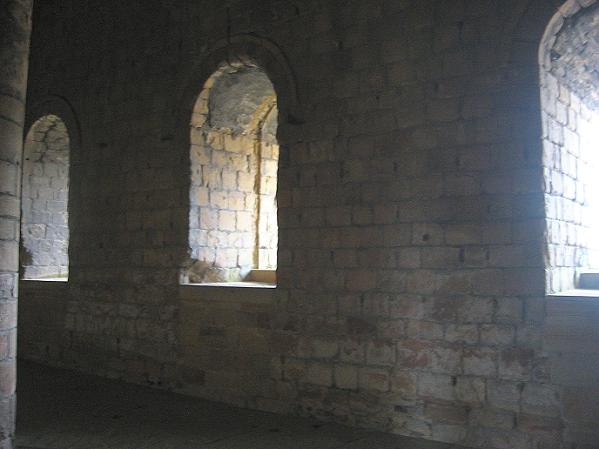 The keep, interior of the first floor
The 11th century great hall, known as Scolland's Hall after a constable of the castle, is one of the most important examples of Norman domestic architecture in England. It is a two storey building with a great hall and solar on the first floor, and an undercroft that may have served as storage rooms. You can still see the sockets that supported the beams for the timber floor. 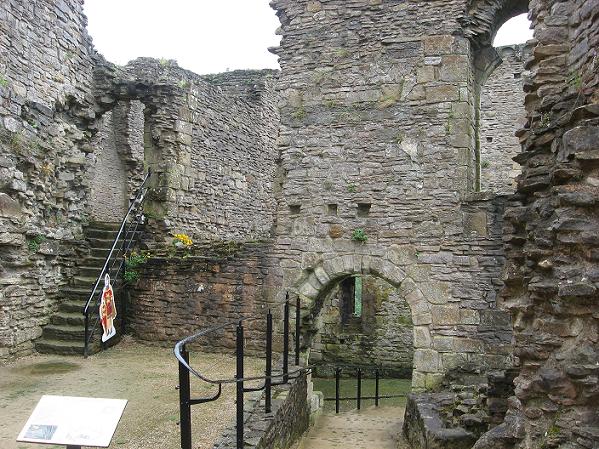 Scolland's Hall
The hall could be reached from the outside by a set of stairs (which has collaped long since). The solar had a fireplace and a balcony overlooking the Cockpit Garden, as well as a small staircase leading down to it. One of the windows of the great hall was later changed into a door leading to the adjacent buildings.

The hall must have suffered from a fire at some time. Alterations, especially in the windows and the dais in the great hall, in front of the solar, have been made in the 13h century. The Gold Hole Tower was probably built at the same time as additional protection of Scolland's Hall. 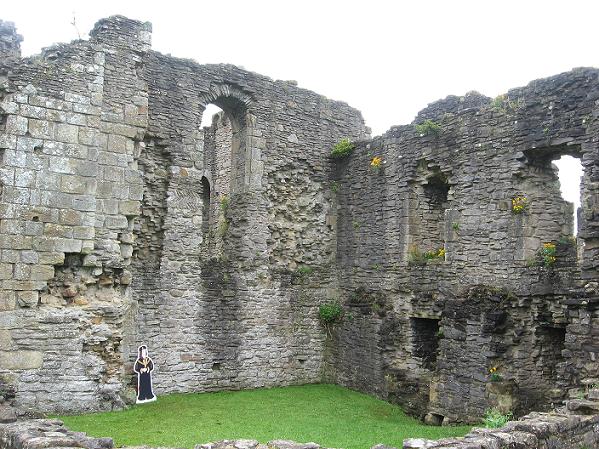 Remains of the domestic buildings, interior
A great hall and a solar did not offer enough living space for the lord and his family and guests, of course. A set of domestic buildings with a chapel and several chambers have been set up against the eastern and southern curtain walls in the 12th and 13th centuries. Together with Scolland's Hall, the domestic range forms the shape of an L.

Again, the more comfortable and the representative rooms are situated in the first floor, including a great chamber and a chapel which was likely used by the lord and his family, or the king when he visited. The lower storey was taken up by the kitchen, buttery and pantry. 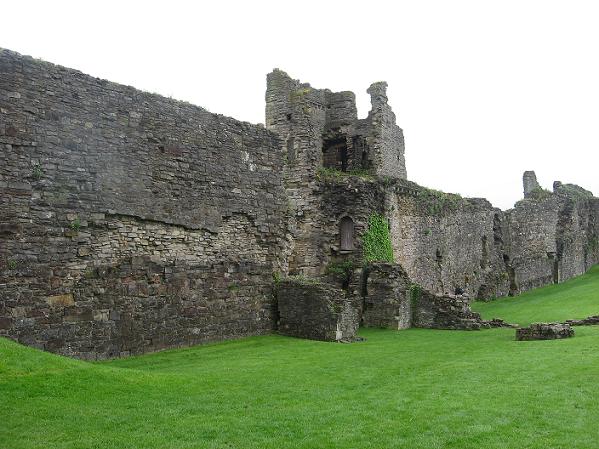 Curtain walls with Robin Hood Tower
Three square towers once lined the eastern curtain wall. The southern one of those, Gold Hole Tower, still remains to its original height. The middle tower has collapsed, but of the northern Robin Hood Tower, considerable ruins are left, including a chapel dedicated to St.Nicholas in the lower floor (which had been closed when I visited). Its lower part dates to the 11th century, but two additional storeys were added later, likely during King Edward I's improvements of the castle.
¶ July 07, 2019

Comments:
What a wonderful read. Thank you for taking the time to share your photos and the history with us.

I last saw Richmond Castle in 1999 and before that I was based in the nearby Catterick Garrison, so the sight of the castle has good memories for me.