2 Oct 2009
Mediaeval Braunschweig
I'm back from the visit to Braunschweig (English 'Brunswick'). I got photos, but not from the exhibition - I really don't know what's the problem with Medieaval exhibitions in Germany, since the Roman ones I've seen all allowed people to take pictures. Culture is for sharing, not for hiding in vitrines for a privileged few to see. Ok, rant over.

I got exterior shots of the Burgplatz (Castle Square), though, and pics of the cathedral. 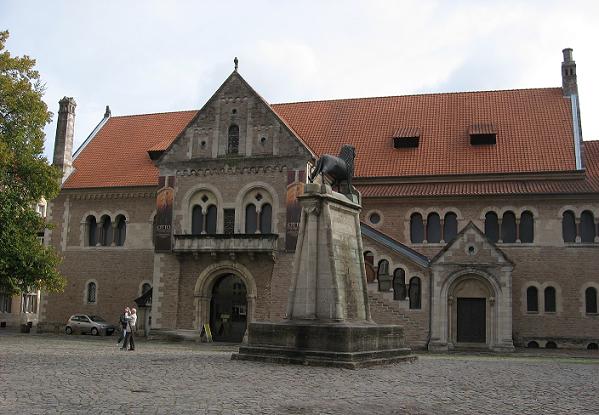 This one's not on a hilltop for a change. It dates back to the 11th century and was expanded by Heinrich the Lion in the style of the palatine castle in Goslar in the 12th century. The entire castle took up the island in the Oker river and was considerably larger than todays 'castle square'. Dankwarderode and most of the old town of Braunschweig were destroyed in a fire 1252.

In the 17th century, only the two storeyed palace building - rebuilt in Renaissance style - was still in use, and in the 19th century even that lay in ruins. But the palas was reconstructed on the ground plan of the Medieaval building in what's called Neoromanesque style. Except for the unhistorical staircase and the arrangement of the windows in the upper floor, it's a pretty adaequate representation of the exterior of Heinrich's palace, though. 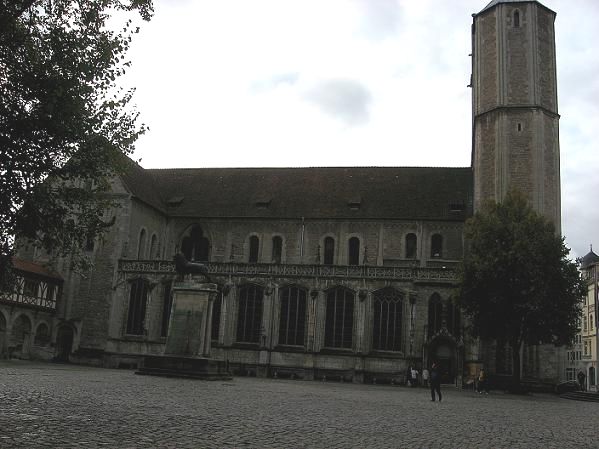 Braunschweig Cathedral
The cathedral was founded by Heinrich the Lion as chapter church in 1173 (after his return from a pilgrimage to Jeruslalem) and dedicated to St. Blasius and John the Baptist; later Thomas Beckett was added as patron, a pretty unusual patron saint as far as I can tell.

The building was only finished in 1226 - there seems to have been a break in construction during Heinrich's exile. Heinrich was buried in the cathedral after his death in 1195; the main nave, crypt and choir had been finished at that point. 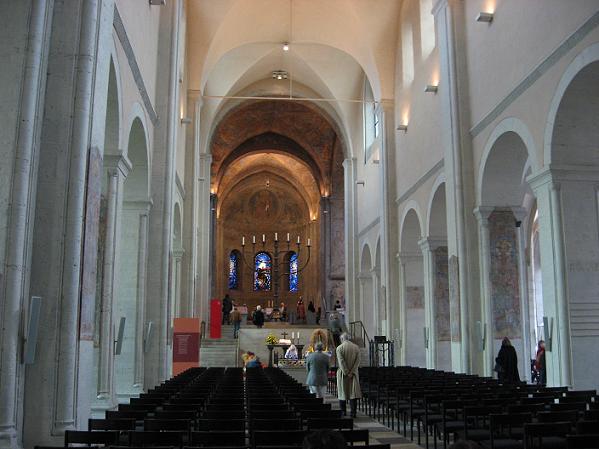 Cathedral, main nave
The cathedral is built in the basilica style with three naves ending in apsides, transept and high quire, and a so-called Saxon Westwerk, the mostly unadorned western wall with the two towers. The ceiling of the main nave shows one of the earliest surviving barrel vaultings in Germany.

There have been several changes, as usual with Mediaeval buildings. During one of those alterations a special feature was added: the pillars and cross grain vaults in the northern nave are of the English perpendicular style that was not normally used in Germany, the windows have so called Tudor bows. 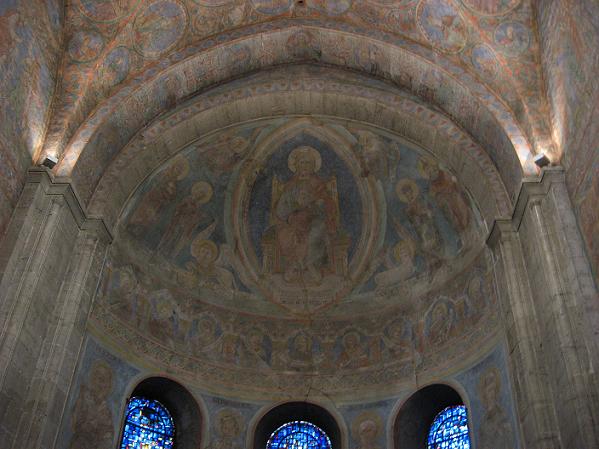 Cathedral, murals in the apsis
The crossing and apsides had been painted in secco mural style in 1230-1250. Those paintings have been recovered under layers of whitewash in 1845 and were 'reconstructed'. Unfortunatley, in the 19th century that meant not only refreshing the colours but also adding a few elements people thought looked Medieaval. But there are still enough orignal elements to give a good impression of 13th century sacral paintings esp. in the southern transept where the orginals have been recovered as far as possible. Murals in places where there had been none in the Middle Ages have also partly been ereased.

The photo above shows Christus Pantokrator, a motive that has its origins in the Byzantine art. 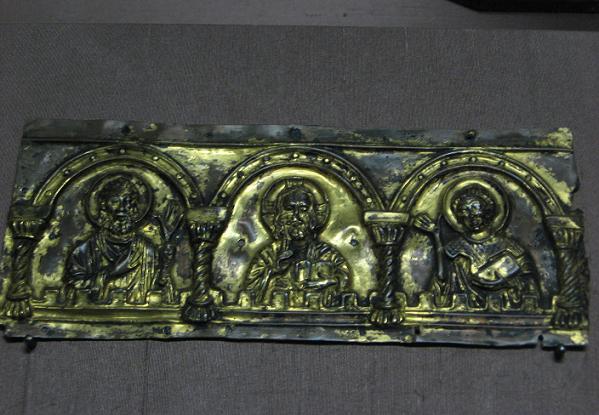 Decoration of a casket containing bones of a martyr
There is a permanent exhibition of Medieaval art in the Squire Hall (Knappensaal) of Dankwarderode Castle, mostly of the sacral variant like crucifixes, reliquaries and a few tapestries with religious motives. It is part of the Duke Anton Ulrich Museum in Braunschweig. 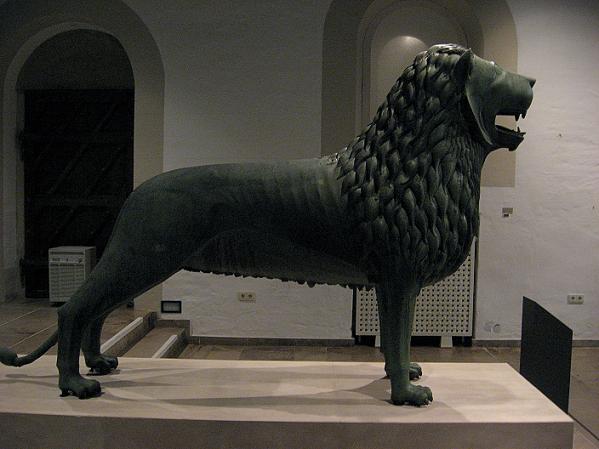 Original of the lion statue of Heinrich the Lion
The Lion of Braunschweig, the heraldic animal of the Welfen family (Welf means lion cub) was commissioned by Heinrich the Lion in 1166. It demonstrated his ducal position and power. The lion is the oldest remaining large style sculpture north of the Alpes - the bronze cutie is 1.78 m high and 2.79 m long - and probably forged in Braunschweig itself. Its models are the Capitoline Wolf (the one that's causing discussions whether it is Etruscan or Medieaval), the Lion of Venice and the Marc Aurel statue in Rome. Heinrich had seen those sculptures during Emperor Barbarossa's first two Italian wars.

There is a copy on the castle square, standing on a big stone pedestal. You can see it in the first pic. The original is kept in the museum, because pollution would damage the bronze.  ¶ October 02, 2009

Comments:
Quality pictures as ever Gabriele, and I share your camera frustration (though if you can get decent photoes through a vitrine you're doing better than I am). I'm always startled by how much twelfth- and thirteenth-century architecture you appear to be able to find more or less at your doorstep.

A tiny point of English, lastly, which may help others too: 'privilege' does not have a 'd' even though it sounds as if it should. It's one of those Norman French words that stuck in English via the law courts, because of course it actually means 'private law', `privi lege', a right that is not available to the general public. The etymology, for once, explains the spelling.

Thank you, Jonathan. I'm getting pretty good at taking photos through a vitrine - some of the pictures from Haltern turned out fine.

The protestant counties in Germany are a good hunting ground for Medieaval architecture since the churches didn't get 'polluted' with Baroque ornaments the way it often happened in Catholic counties in southern Germany and along the Rhine.

Thanks for the spelling correction. The word did look off with a d but I went with the sound. Damn English never follows its own rules. ;)

Someone once said "English never met a word it didn't like", and one of the problems with borrowing words from all over the place is that spelling ends up all over the place as well. You're not alone, which is why every now and again some committee of the great and good publishes a report suggesting that spelling should be harmonised for greater consistency (and gets ignored). The Microsoft spelling checker can be quite handy for once - it can't find mistakes where one correctly spelled word has been substituted for another ("my deer friend" etc), but it's quite good for typos and misspellings.

Great photos, especially the interior shot of the nave. That really gives a good sense of space.

I deactivated the Microsoft spellchecker because it insists on using the reformed German spelling which I refuse to acknowledge. ;)

Those murals were beautiful. Thanks for sharing all of these wonderful places with us. I'm sure that without these posts not many would even know these places existed!

And, for what it's worth, even I've had problems with that privilege word quite few times!

Truly beautiful, especially the Byzantium Art. Thanks very much for sharing. Love your blog.

Thank you, Lady D and Mirella.

Braunschweig is actually a big enough town that should have made it into the travel guides, but there are indeed hidden treasures in Germany I like to share, like the Romanesque Weser abbeys and all those castles. :)

Great pics - I love the murals especially! Interesting about Thomas Becket, too.

Yes, the Beckett thing is interesting. Wonder if Mathilde asked Heinrich to add him, for her father's sake.