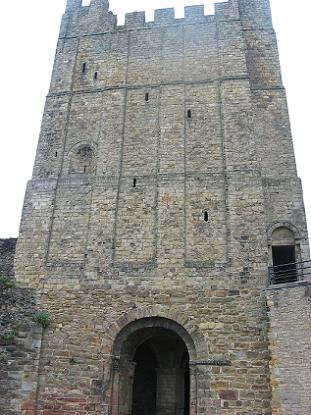 Another shot of the keep

In 1223, the Honour was split between the Earl of Chester and Duke Peter de Dreux of Brittany, acting as regent for his son John (2). Peter forfeited his part for joining the King Louis VIII of France in an attack of the English Poitou and Gascony. But Peter would have prefered Brittany to be independent of the French king, and Henry III needed his support in the war, so the Honour - obviously the complete one - was restored to Peter but a year later. When Louis died, Peter led a rebellion against his son Louis XI and his mother Blanche of Castile, but the revolt eventually failed, and he had to make his peace with the king of France. That, of course, led to the second forfeiture of the earldom of Richmond on 1234.

It would take until 1268 for his son John of Brittany to receive the earldom (3). His son, another John, married Henry's daughter Beatrice and succeeded his father as Duke of Brittany and Earl of Richmond in 1286. John II had the usual problems of divided allegiances when King Edward I fought in Gascony. He lost Richmond for a time, but was received back into the good grace of the king in 1304 (4). 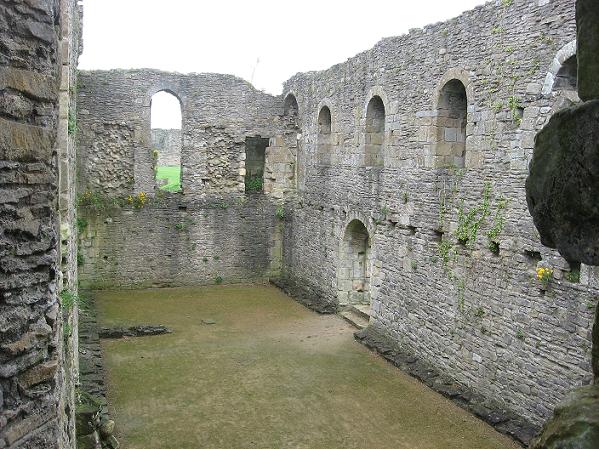 Scolland's Hall, interior facing west
Both Henry III and Edward I made some minor alterations to Richmond Castle during the times when the honour had fallen to the Crown. Edward renovated Scolland's Hall, extending its adjacent range, and added the vault to the keep. 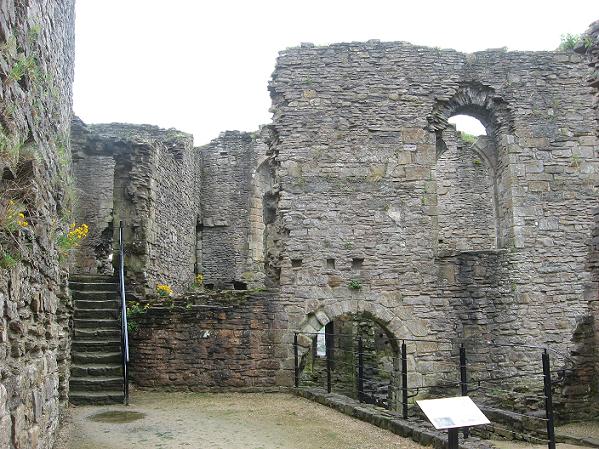 Scolland's Hall, interior facing east
John's son Arthur succeeded him as Duke of Brittany, but Edward chose to grant Richmond to his second son, another John (1306). It was a first attempt to separate the ties between duchy and earldom - John had been educated in England and proved to be a loyal vassal of Edward I and Edward II. He was captured by Robert the Bruce at the Battle of Byland Moor in 1322 where he led the English host, and only released upon a payment of a hefty ransom two years later. While John stood with Edward II through the first crisis of the Lord Ordainers in 1310, he sided with Isabella in 1325 (5). He lost Richmond, of course, but it was restored to him by Edward III upon the abdication of Edward II. Yet John prefered to spend his last years on his French estates. He died childless and was succeeded by his nephew, yet another John. *sigh* John III had already been Duke of Brittany since 1312 and became 5th Earl of Richmond in 1334; he remained a supporter of King Edward III. 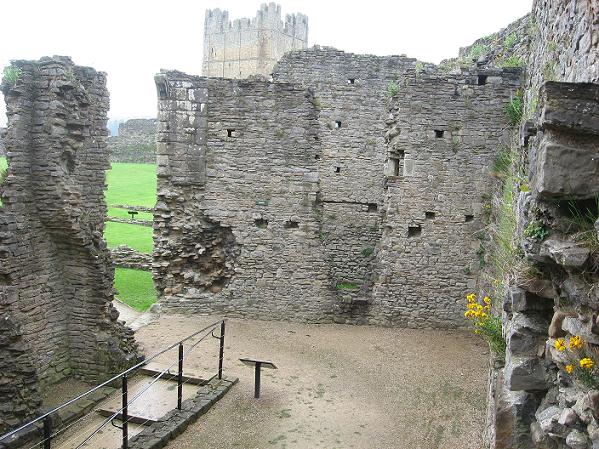 Remains of the 12th century house, interior
John died without heirs as well and the claim to the duchy was disputed. The Breton Heritage War became part of the Hundred Years War. Edward supported Jean of Montfort, another son of Arthur II with his second wife Yolande of Dreux, Countess of Montfort (she was the widow of King Alexander III of Scotland). The other contestant was Joanna of Penthièvre, a daughter of one of Arthur's sons from his first marriage. Joanna and her husband Charles of Blois had the support of the French king.

There is something odd going on here: It seems that King Edward granted Jean of Montfort the earldom of Richmond upon the death of John III, but when Jean was captured by the French king during the fight for the Duchy of Brittany, the earldom was confiscated and never restored to him even when he escaped from French captivity and fled to England. Why would Edward do such a thing (6)?

Jean's wife Joanna of Flanders continued the fight, and Jean returned with English troops. After several years of war and shifting fortunes of the combattants, the duchy of Brittany was finally given to Jean IV of Brittany, a son of Jean of Montfort and the fierce Joanna of Flanders, in 1365 (7). 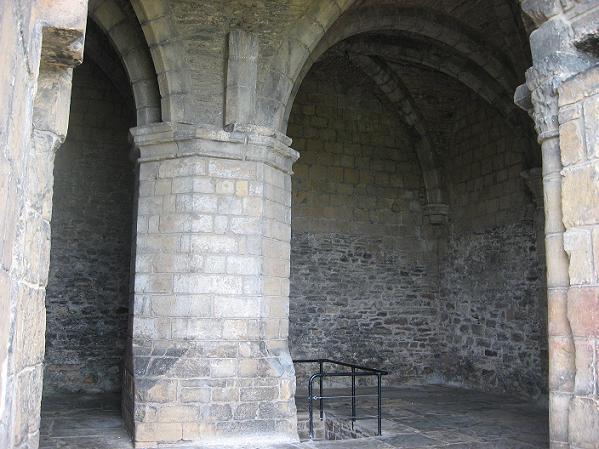 Keep, interior of the basement
When Edward III put the Honour of Richmond 'behind the shield of England' in 1342, he granted the earldom to his son John of Gaunt who surrendered it in favour of Jean IV of Brittany in 1372. But it seems Jean forfeited the earldom when the Breton war flared up again. At this time, it was finally disconnected from the duchy of Brittany which eventually lost its independence.

The title went to John of Lancaster, Duke of Bedford, a son of King Henry IV. He died childless. The next high ranking noble to hold the title was Edmund Tudor, a half-brother of the unlucky King Henry VI. His son would become the first Tudor king as Henry VII. During the War of the Roses, the earldom of Richmond went to members of whatever family was on the rise, among them the Duke of Gloucester and future King Richard III.

After the war, the Honour of Richmond became a Tudor fief, and the new title of Duke of Richmond was created. Its first holder was Henry FitzRoy, an illegitimate son of the (in)famous Henry VIII.

The castle of Richmond was no longer used as fortress by the end of the 14th century. In consequence, repairs were no longer undertaken, and the castle was reported as being partly in ruins in a survey from 1538. 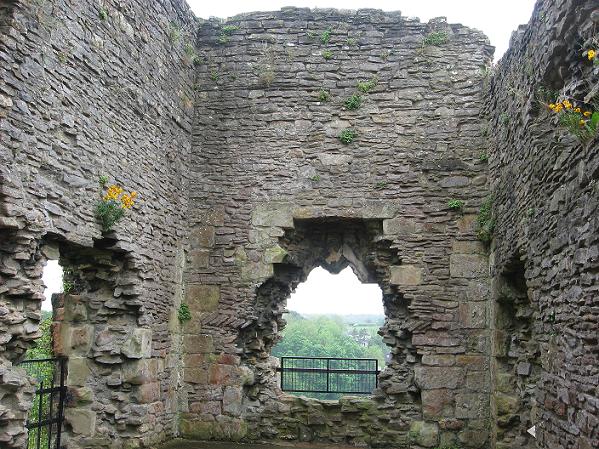 Still impressive: windows in the domestic buildings adjacent Scolland's Hall
Footnotes
1) An older but detailed history of Richmond can be found in: 'The honour and castle of Richmond', in A History of the County of York North Riding: Volume 1, ed. William Page (London, 1914), pp. 1-16. British History online
2) Jure uxoris - the title came from his wife Alix of Thouars, and Jean would inherit it upon maturity, no matter whether Peter was still alive.
3) King Henry had meanwhile given the Honour of Richmond to Pierre of Savoy, an uncle of his wife Eleanor of Provence, who gave him no reason to take it away, so there were a lot of negotiations about recompensation going on.
4) Obviously, the French king was in no position to retaliate by confiscating the Duchy of Brittany in turn, because John continued to rule there.
5) About the Lord Ordainers see the post about Scarborough Castle.
6) All sources agree in the fact, none offers an explanation. If Edward thought that the oath of fealty to the French king due for the Duchy of Brittany interfered with loyalty owed him for Richmond, why continued he to support Jean's claim to the duchy?
7) The peace proved short-lived, but that is not part of this essay.  ¶ June 24, 2018

Comments:
What a coincidence- I've been reading about Henry Tudor in Brittany and the connection to the title of Richmond. Needless to say I enjoyed your post!

Anerje, that's quite the coincidence indeed. :-)