12 Nov 2008
Don't Mess With Me, lol
These fun pictures were taken in the Late Mediaeval Museum in Goslar. 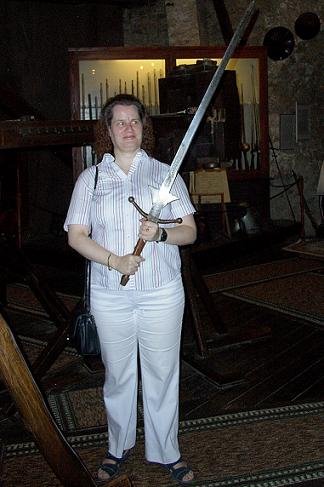 They had a number of replica and some originals from the later Middle Ages, plus some torture instruments and assorted other fun. The frame of what to display included not only crossbows and a ballista, but also muskets.

It's one of those small museums run by devoted fans and geeks, and reminded me a bit of the Richard III Museum in York. And like that one, it is housed in an old tower of the town fortifications (you can also hire a self catering appartment in the same tower). Those more or less private museums also have the advantage that the staff is usually less picky about people touching things. No wonder I had a field day.

And if you think the sword to the left is large, wait until you see its big brother. 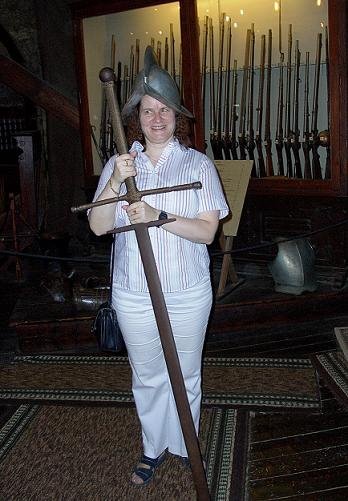 To the right is said big brother; a sword too big to hold in proper defense stance long enough for an un-blurred photo. Zornhau or Bill should know what exactly that oversized knife is called; it's surely a bihander sword still in use during the Thirty Years War. Both sword and helmet are replica.


Edited to add: Zornhau says in the comments that it is more likely a ceremonial sword that would be carried in a procession, and not a real weapon. I don't envy the poor chap who got that job, lol.

Comments:
Oh, those are bad-ass swords! Should give plenty of inspiration for NaNo! *wonders if she can give her butler one*
And... accountancy? http://www.youtube.com/watch?v=XMOmB1q8W4Y

Well, in that old manor house there should be no shortage of swords.

And I needed a good knife the other day and it was on the wrong side of ocean. Drats!

Wow, that looks like a great place to visit, Gabriele! And it's marvellous that they'll let you play!

Forgive my spelling....that would be a swi-hander. I have never heard of a bi-hander. Means the same thing right? What a beautiful sword.

It was never actually carried into battle as a personal weapon. It was used by convicted criminals who would get their sentences commuted if they were to stand up in front of the battle and disable the horses with that sword. Other use for it was to roll under the hedgehog of pikes to get close enough to cut the pike heads off.
Sources may be cited if desired.
All in all, a GREAT sword indeed.

Stag, Bihänder (both hander) is the German spelling maybe, though I have it seen as bihander in English texts as well.

I think there were specialists using it during the Thirty Years War who got double pay compared to the normal mercenary.

With the larger sword I would think perhaps the men who used them were tall, muscular and a sight to behold.

Great post, Gabriele. I need to catch up on your other posts.

The accountants won't dare mess with you :-)

Gabriele - you are a very scary woman! Especially with that two-hander! I will remember to always be nice to you ;-)

Lol Carla, no they won't.

Lady D, I only visit my enemies carrying those. :)

Um... the big one is probably a "bearing sword", as in for carrying around in processions etc, but not for actual combat.

Executioner's swords tended to be more like great swords, have plain blades and blunt tips.

As I understand it, the Zwiehander was used to take on pikes, but I'm not sure of its latest date.

Nice museum. When we plan our next German trip, I shall quizz you.

Thanks for the info, Zornhau. Maybe the big one is the modell 'Troll Extra Large' to be used in Fantasy RPGs. :)

Feel free to quizz me about Medieaval and Roman places to go. I don't know a good tank museum, but some of my father's friends may.