16 Jun 2019
To Drink the Waters since the Middle Ages - The Spa Town Karlovy Vary / Karlsbad
I only took a brief walk through the centre of Karlovy Vary (Czechia). The town has a lot of pretty, and even splendid, buildings of the Neo-Classicist, Art Déco and Art Nouveau styles that have been lovingly restored. Nevertheless, the overcast sky and lack of green (except for some willows in the park) early in the year made it look a bit grey. I'm sure Karlovy Vary will be lovely when the sun sparkles in the water, the trees are green, and the façades of the houses shine in their bright colours. You'll have to deal with the less colourful photos, I'm afraid. 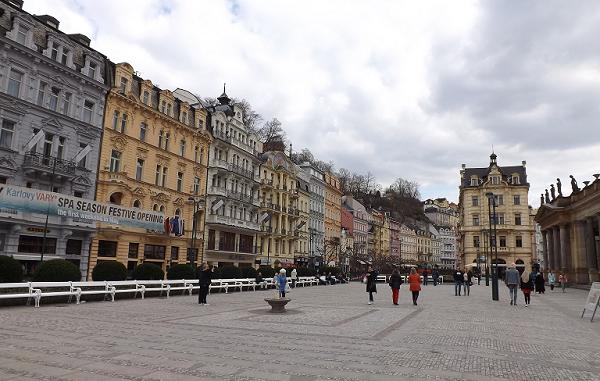 Karlovy Vary, square at the Teplá river
Karlovy Vary is situated at the confluence of the river Ohře and the warm water river Teplá; site of 13 main springs and about 300 smaller ones. The healing properties of the waters have long been known; traces of settlements in the area date to the Bronze Age. The first mention of the place in the Middle Ages is the Breve testatum, a charte dating to 1325, signed by King John 'the not yet Blind' of Bohemia, which mentions hunting grounds at the 'horké lázně u Lokte' (= the hot springs near Loket).

The date of the charte disproves the legend according to which it was King Charles of Bohemia (1), John's son, who found the well during a hunt when he watched a hind drinking from the waters. Charles was in the Loket area a few months after the battle of Crécy (August 1346) where his father died, but he did not discover the warm springs which were already known. He might have made use of their healing properties, though, since it seems he still suffered from a leg wound he received during his retreat from the Crécy battlefield (2). 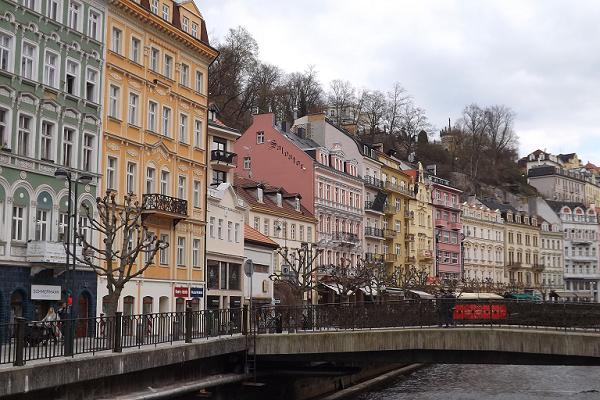 Pretty houses along the Teplá river
Charles built a hunting lodge near the springs which developed into a settlement. He granted the place the privileges of a town in 1370. The town was then called Karlovy Vary (= the warm baths of Charles); Karlsbad in German. No buildings or ruins of the Mediaeval town remain.

At first, the waters would only be used for baths; the internal use by drinking the waters only started in the 16th century. One doctor Wenceslas Payer from Loket wrote a "Disquisition about the Thermal springs of the Emperor Charles IV Situated near Elbogen and St. John's Valley, Issued by Doctor Wenceslas Payer from Elbogen, Devoted to the Venerated and gracious Count and Lord Stefan Schlick" (3) in 1522, in which he suggests drinking the water in addition to taking baths. 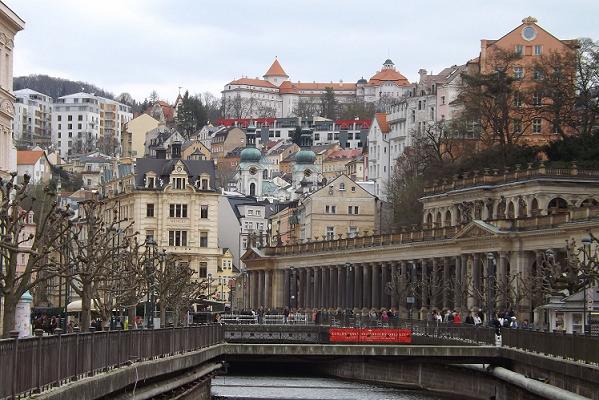 View from the Teplá river to the houses uphill
The town was hit badly by a flood in May 1582 - the houses were mostly along the valley at the time and not up the slopes of the surrounding hills - and again damanged by fire in 1604. Karlovy Vary recovered slowly, but in 1707, it got its privileges a royal free city confirmed by the emperor Joseph I. Bohemia at the time was a consituent part of the Habsburg Empire. Sojourns by the Russian tsar Peter the Great in 1711 and 1712 increased interest in the healing properties of the waters, and more people of standing visited the town.

Empress Maria Theresa commissioned the Mill Colonnade in 1762. A special spa tax was introduced in 1795; the money was used for the upkeep of the public buildings. There were also hospitals for the poor who else could not have afforeded a stay in the spa. 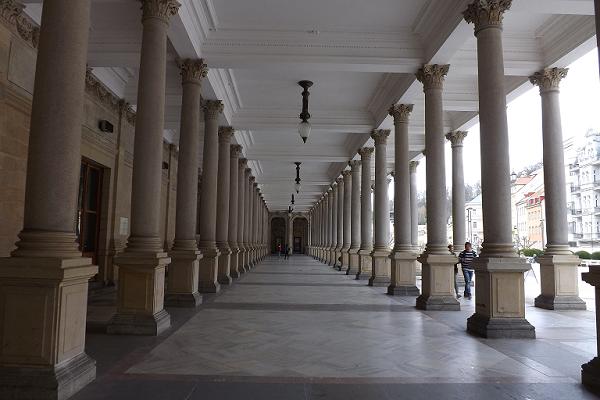 Mill Colonnade, interior
An important figure in 18th century Karlovy Vary was the physician and balneologist David Becher (1725-1792) who established a 'modern' use of the waters. He was born in Karlovy Vary, studied Medicine and Chemistry in Prague, then traveled to Italy and Austria to further improve his knowledge. Later, he became dean of the Medical Faculty in Prague, but returned to Karlovy Vary in 1758.

At the time, baths and drinking waters were applied according to the principle 'the more the better' (drinking several litres of the lukewarm stuff while lying in bed, fe.). Becher changed that to 'less is more'. He also recommended walks in the fresh air and diets, and thus started a use of spas not so different from today. One of his more famous patients was the German writer and historian Friedrich von Schiller who suffered from indigestive problems.

Becher analysed the properties of the waters and noticed that one important component was carbon dioxide, in addition to several minerals. The waters were - and still are - used for all sorts of indigestive, gyneological and metabolic problems (drinking) and afflictions of muscles and joints (baths). 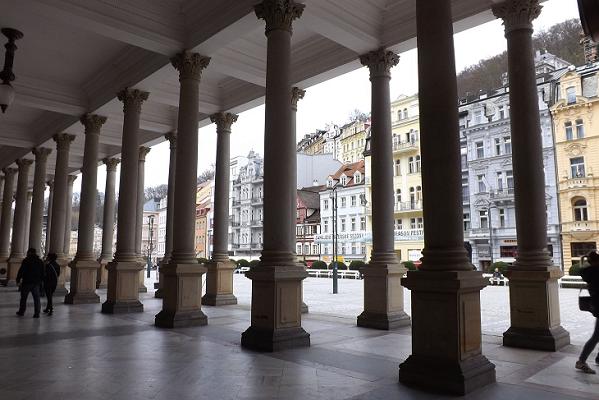 View from the Mill Colonnade
Visiting Karlovy Vary became popular in the 19th century. Among the visitors were the emperor Francis Joseph I, the composers Ludwig van Beethoven and Frédéric Chopin, the German writer and polymath Johann Wolfgang von Goethe, the Russian writer Nikolaj Gogol, the psychologist Sigmund Freud and others. Taking the waters was not only a medical process, but a society event (and half of those visiting were not really ill). Spas became fashionable.

They still are: Nowadays, Karlovy Vary hosts a film festival which has been attended by stars like Antonio Banderas, Robert de Niro, John Malkovic, Renée Zellweger and others. 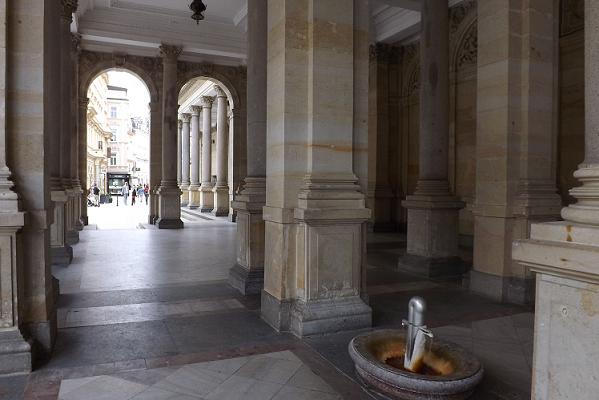 Mill Colonnade interior, different angle with a well in the foreground
I got a British connection for you as well. *grin* One of the more popular, and definitely more generous, visitors of Karlovy Vary was the Scottish Lord James Ogilvy, 7th Earl of Findlater and Peer of Scotland (1750 - 1811). He studied at Oxford, then went to Brussels where he married Cristina Teresa Murray, though they only lived together for a short time. It is assumed that he spent so much time out of Scotland in some sort of self-imposed exile due to his homosexual orientation.

Findlater spent a lot of time in Karlovy Vary, called Carlsbad in English, since 1794. He gave large sums of money to local charities and improved the surroundings of the town - he was an amateur landscape architect of considerable skill and taste who worked in other places as well, for example in Dresden where he settled for good. He built a palace overlooking the Elbe river and lived there with his personal secretary Johann Georg Fischer (4). 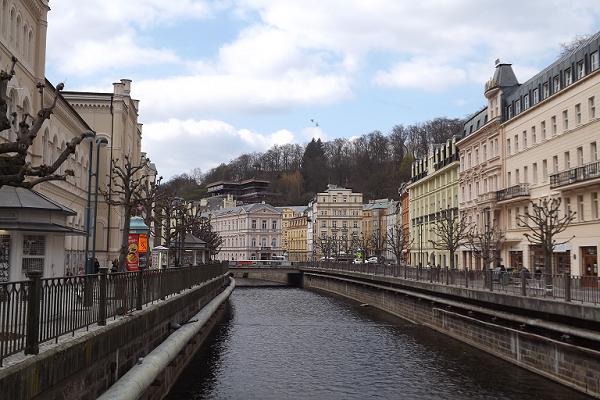 View from one of the bridges across the Teplá river
The spa became even more popular with the construction of railway lines from Cheb and Prague in 1870. Another building boom followed suit. Most of the prior buildings followed the Neoclassical style, but the new houses followed the Art Nouveau style. Many fine examples can still be seen today. They were financed by donations, the sale of the Carlsbad Salt (an extract of the minerals from the wells), and the spa tax.

The number of visitors reached 70,000 plus in 1911, but the outbreak of WW1 disrupted the tourism. 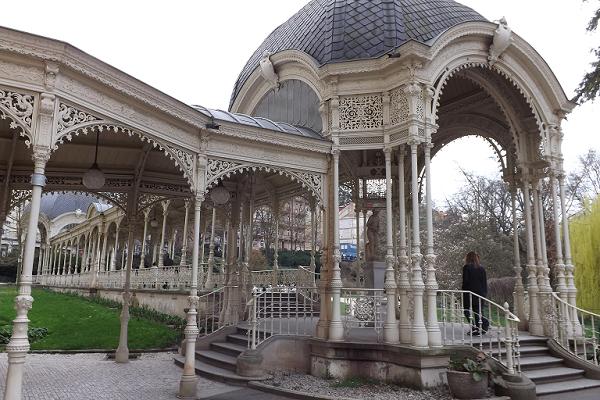 Park Colonnade
A large number of the west-Bohemian population was German-speaking, and Karlovy Vary mostly known as Karlsbad. But after WW1, Bohemia was incorporated into the new state of Czechoslovakia, and suddenly speaking the Czech language was required. Many German inhabitants of Karlovy Vary protested.

Unsurprisingly, most of the German-speaking population of Czechoslovakia welcomed the return of the newly named 'Sudentenland' to Germany in 1938. The controversial Munich Agreement between Germany, Great Britain, France and Italy allowed the annexation of the border lands of Bohemia and Moravia. So Karlovy Vary became Karlsbad again.

Karlsbad was an internationally acknowledged hospital town during the war. The town was nevertheless bombed in April 1945. The railway station, together with two Red Cross trains, was destroyed, but the spa quarter escaped damage. The town was conquered by the Americans in May 1945 and handed over to the Red Army a few days later. 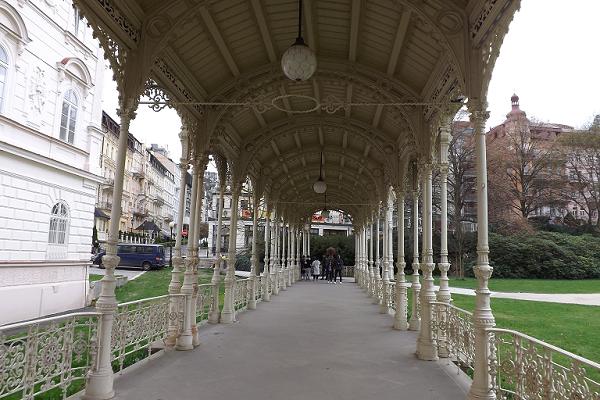 The Park Colonnade from the inside
After the war, the German-Bohemian population was expelled and expropriated in accordance with with the Potsdam Agreement and the Beneš Decrees. Karlsbad was again named Karlovy Vary.

All wells and sanatoriums in Karlovy Vary were nationalised in 1948. Afterwards, visitors mostly came from the countries of the former Soviet Union. Tourists from western countries returned after the 'velvet revolution' in 1989 and the fall of the Soviet Union in 1991; their number is steadily increasing. 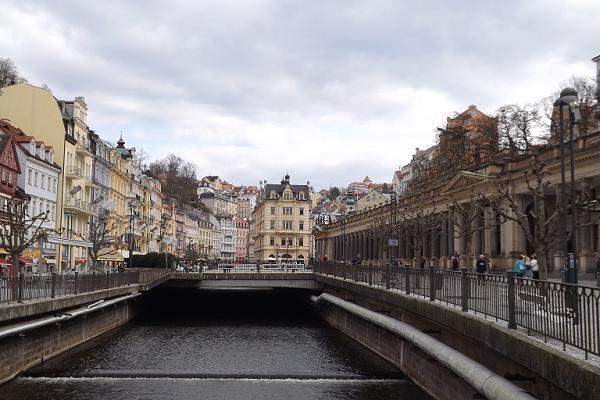 View from the bridge, other side
Russian business and presence is strong in Karlovy Vary - the town is basically bilingual. It is the only place during my visit in central Europe where I felt OK speaking - a rather rudimentary - Russian. The language else isn't so popular in the countries of the former Soviet Union.

Like most other towns in the Czech Repbulic (and the other ex-Soviet states), Karlovy Vary has been restored to its former splendour, and its wells are still used. A specially shaped cup with an elongated hollow handle to drink the waters is sold everywhere, but there are 'no photographing' signs which I respected. Though I didn't feel like spending an extra tourist sum on buying one of the rather kitchy things just for a photo and a sip, and used the cup of my water bottle instead. *grin* 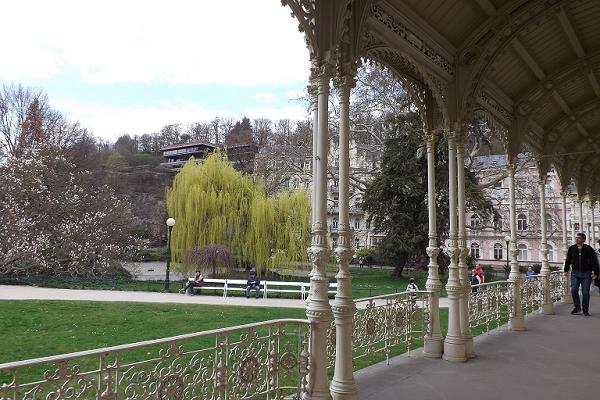 View from the Park Colonnade
Footnotes
1) Charles (May 1316 - Nov. 1378) had been elected King of the Romans in July 1346, though he did not hold the title undisputed. He became King of Bohemia upon the death of his father, and Holy Roman Emperor - as Charles IV - in 1355.
2) Maybe the wound led to cramps and muscle problems; that would be something to improve by baths in warm mineral water. I could not find any details about the injury, though.
3) The original title is "Tractatus de Termis Caroli Quarti Imperatoris, sitis ppe Elbogen & Vallem S. Ioachimi, editus a Doctore Vuenceslao Payer de Cubito, alias Elbogen ad Generosum & magnificum Comitem & D. Dominum Steffanum Schlick". Elbogen is the German name of the Czech town and castle Loket. The Count of Schlick was the lord of Loket castle at the time.
4) He bequeathed the Dresden palace to Fischer, but his Scottish family protested at court, arguing that Fischer had been given the palace for 'immoral consideration'. Judging by the one geneaological site where I could trace him, Fischer kept the heritage. Both men were buried together in a parish church near Dresden after Fischer died in 1860.