9 May 2015
Hanseatic Towns and Brick Architecture
I finally found time to sort through my photos and write the obligatory introduction posts to my latest little journey to the Hanseatic towns of Lübeck and Wismar, and visiting some Vikings in the open air museum of Haithabu near Schleswig. 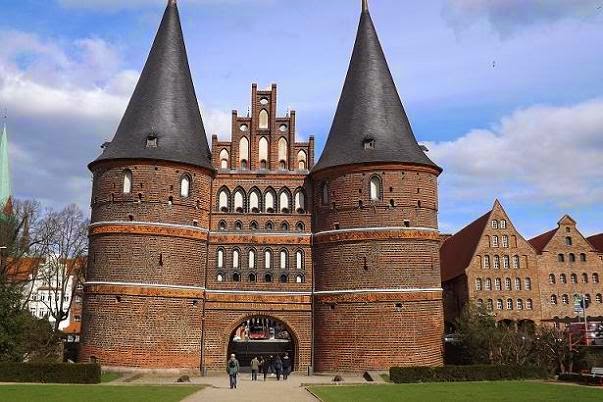 The Holstentor IS sagging a bit due to a soft underground; that's not the fault of the photo. It is a fine example of representative brick architecture and shows that the merchants and town council had the money to build in grand style. 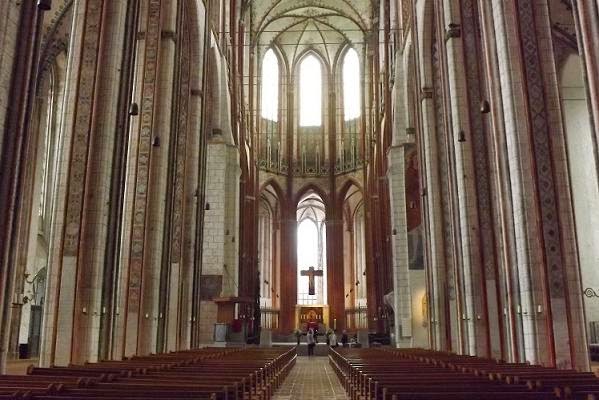 Lübeck, St. Mary's Church, main nave
Another building financed by the town is the Church of St.Mary. It was intended as competition to the cathedral that had been started by Duke Heinrich the Lion, and later became the church of the bishop. Both churches - as well as the other churches in Lübeck's old town - have been constructed of bricks. 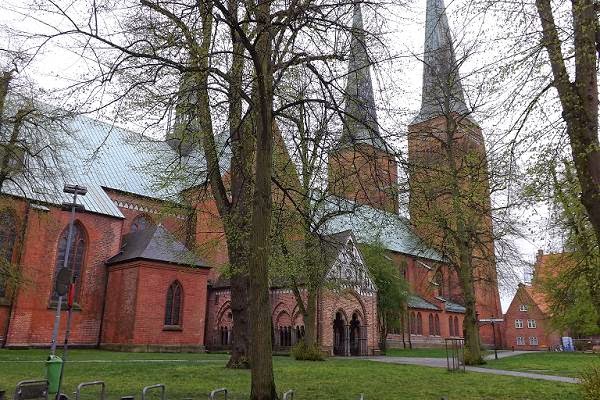 Lübeck, the cathedral seen from the north side
While St.Mary is a purely Gothic church, the cathedral is a mixture of Romanesque elements and Gothic additions, with some Baroque altars and memorials thrown in for bad measure. Unfortunately, the weather was quite dreary the first day - brick architecture looks prettier in sunshine. 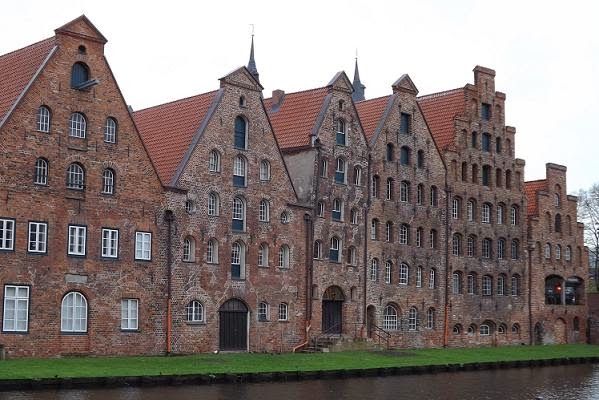 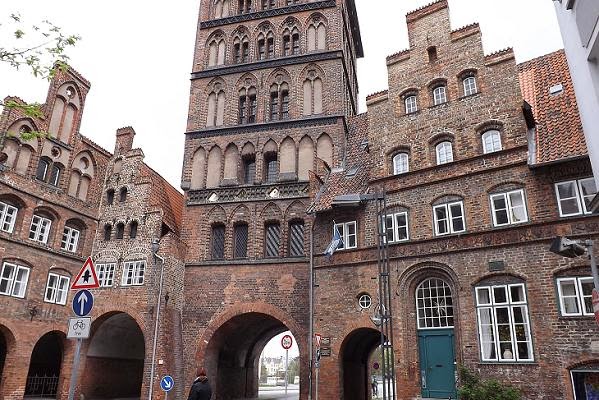 Lübeck, the Castle Gate
The second remaining gate of the old town of Lübeck, the Burgtor or Castle Gate, protected the northern side of the town. The castle which gave the gate ist name had been turned into a monastery already in 1227, but the gate - originally a set of three gates - remained in function long thereafter. 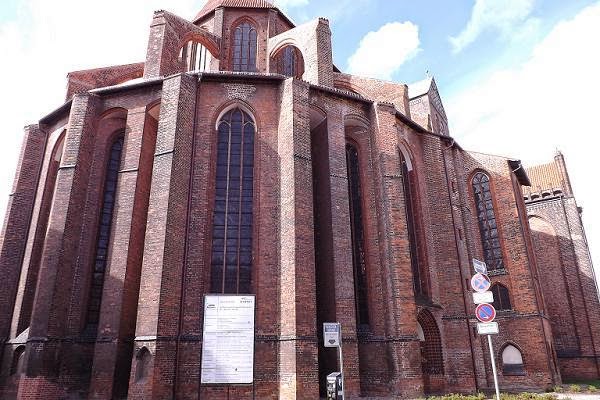 Wismar, St.Nicholas Church, apse
Another fine example of Gothic brick architecture is St.Nicholas Church in Wismar. It is late Gothic stlye, but much less flamboyant than churches of the same time in England or France. The flying buttresses you can see in the photo are more compact and sturdy, for example. 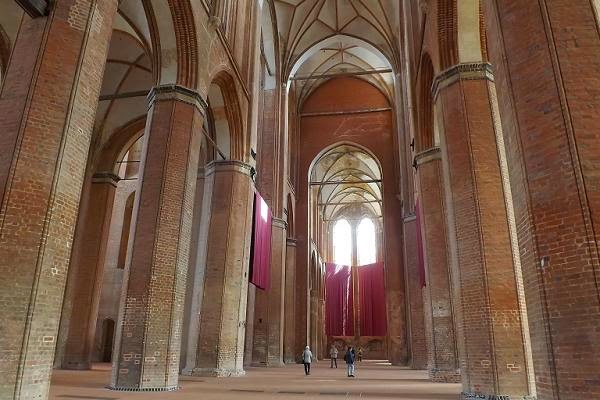 Wismar, St. George Church, interior
When I visited Wismar in 2004, the Church of St.George, which had been severely damaged during WW2, was still without a roof and in bad repair. I had promised I'd come back when they got the roof done and now I've fulfilled that promise. What I like about this church is the lack of furniture, because that way one gets a much better impression of the size of the interior. 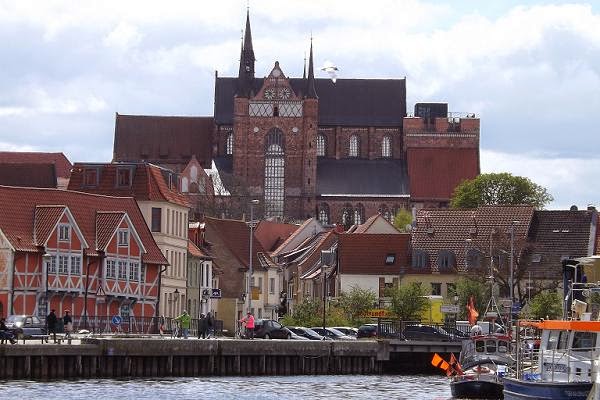 Wismar, St. George, seen from the old harbour
The view from the harbour gives a good image of the size of the church. The planned tower had never been finished. I like the old harbour of Wismar, and I had luck with the sunny weather both times I've been there. 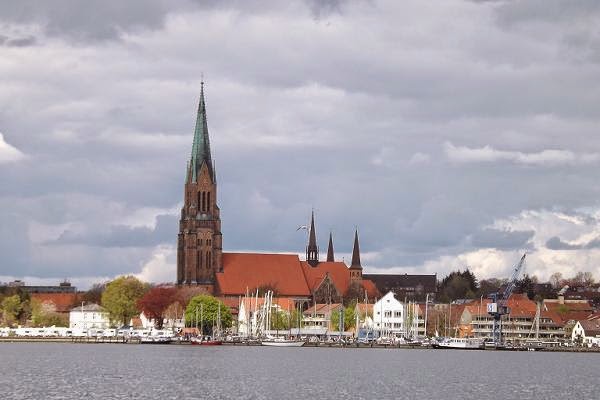 Schleswig cathedral, seen from the Baltic Sea firth
The cathedral in Schleswig got a pretty big tower, though. It is another example of Gothic brick architecture. Schleswig was not a member of the Hanseatic League but it was an important trade town after it took over from Haithabu in the 11th century, and see of a bishop.

I did a second tour in autum. An introductory post can be found here. 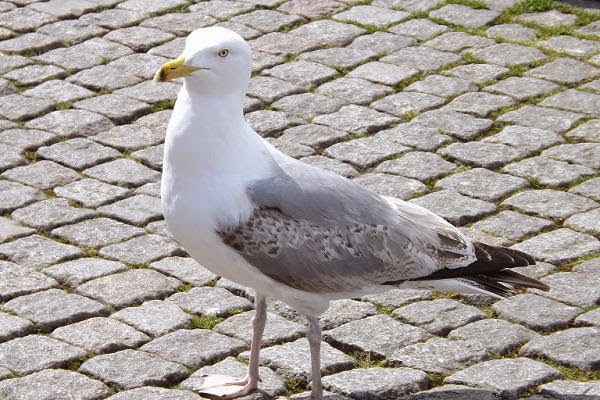 Comments:
The warehouses of Lübeck are lovely. Do you mean they are used as private apartaments as well? If yes, a pang of envy :-)