20 Dec 2020
A Holy Rock – The Klusfelsen in Goslar
The Klusfelsen rock formation is a little known landmark in Goslar, usually relegated to the footnotes in travel guide books. After some initial signposts, I had to ask the locals for directions to get there. And then, passing a small path between some suburban houses, a meadow opened and on its farther edge I found this. 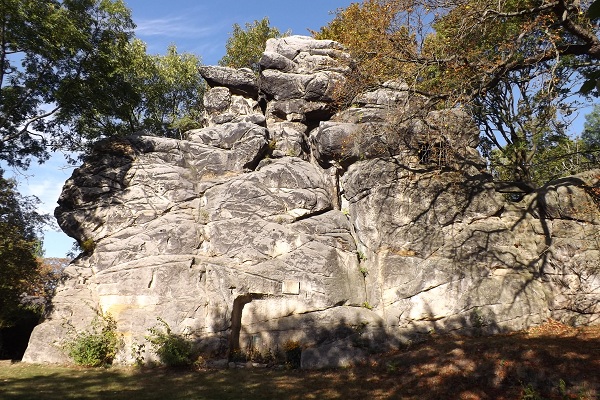 The Klus Rock in the evening sun

The Klusfelsen (Klus Rock) is a sandstone rock of about 20 metres height and 50 metres length, dating to the Lower Cretaceous 110 million years ago. The area had been a shallow sea at that time, the result of an inflow of sea water into the Norddeutsche Tiefebene . When the Harz mountains rose during the following Saxon Orogeny, those sandstone layers were pushed into a vertical position (about the geology of the northern Harz see also this post). 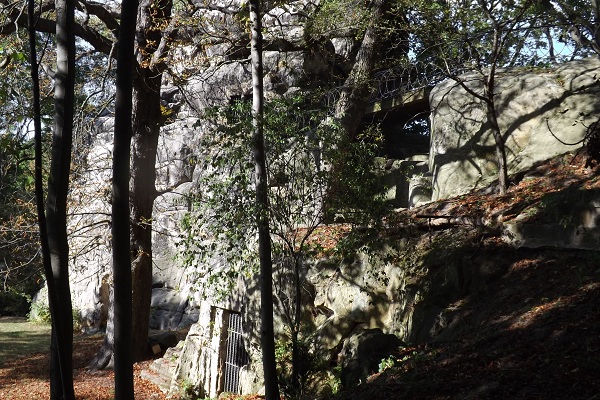 The rock seen from the north

The coastline of that shallow sea was only a few miles south of the present day rock formations which include not only the Klus Rock but several other formations in the northern Harz foothills all the way to the Teufelsmauer (Devil's Wall) near Quedlinburg in the east. Along the fault line of the Saxon orogeny in the northern Harz, the lithologic sequence of rocks have been brought to the surface in a mostly vertical or semi-vertical position: the older Triassic buntsandstein, musselkalk and keuper as well as the younger Cretaceous sandstone. 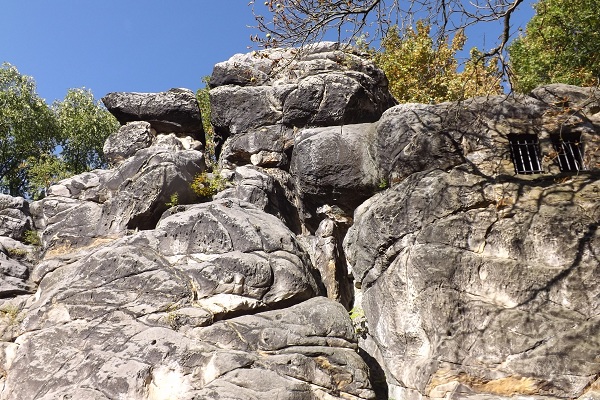 View to the upper part of the rock

The sandstone is a rather coarse and porous variant, originally of a yellow shade, but now more brownish due to weathering - though it still looks more a soft orange in the evening sun. The rock formation also contains several caves of various size washed out of the material. The sandstone is kown as Hils sandstone after a former quarry. That sandstone layer can be as thick as a hundred metres in some places. The stone has been used in construction, esp. for elements that included decorative carvings, during the Middle Ages. 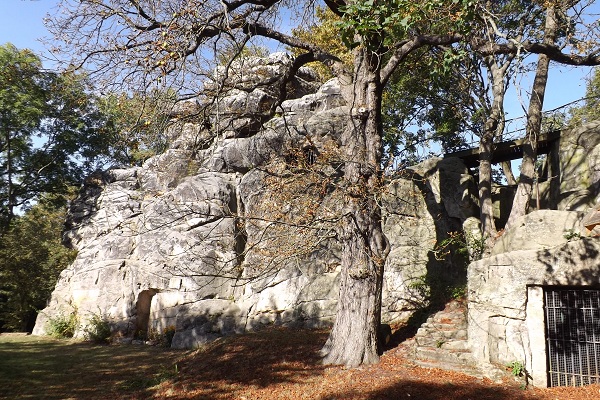 The way up and the bridge

Rocks in such an elevated position and including caves, like the Klus Rock, may indeed have been used as places of worship, for ritual purposes, tribal gatherings and such, but I could not find sufficient proof for a Megalithic cult centre at the Klus Rock that is mentioned online. There is a man made niche in the base of the wall, but if it indeed contained images of pagan deities that were destroyed by Christian missionaries cannot be proven, either. 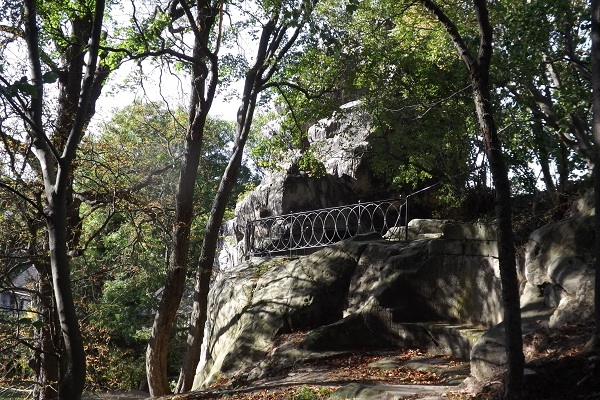 Halfway to the chapel grotto and the terrace

What we do know is that the rock has been used as hermitage that included a chapel dedicated to St.Mary since at least 1167 (for the dating see also below; though I stick with this date). That hermitage gave its name to the rock: Dialectal Klus, high German Klause means a hermit's abode. 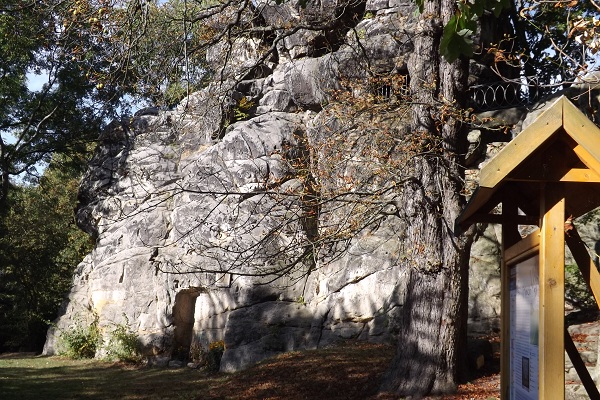 View to the rock with the niche at its base

The hermit – who also took care of the chapel – lived in the cave at the rock base close to the above mentioned niche. The use of that cave predates the establishment of the chapel in the smaller cave in the upper part of the rock, though how far back its use dates is difficult to tell, since both caves have been altered by man in the Middle Ages. 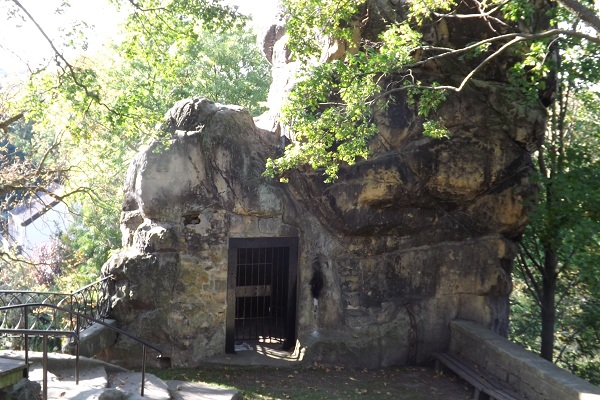 Entrance of the chapel

The chapel in the upper grotto is protected by a locked grille (to prevent people from using the site for parties and leaving the trash behind), but I was lucky to meet a gentleman who had a key to the door and openend the little cave for me, so I could photograph the altar dedicated to St.Mary. 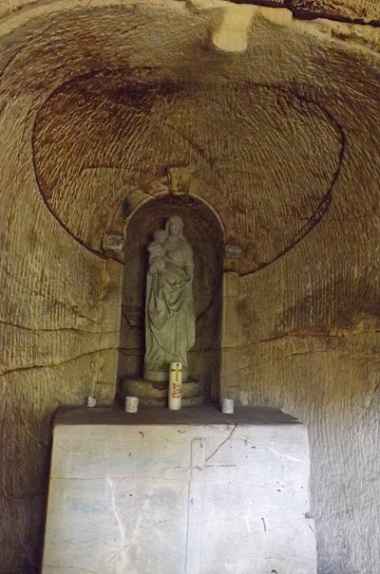 Altar of St.Mary in the chapel grotto

Not far from the rock once stood the chapter church St.Peter, dating to ~1050; a foundation of Agnes of Poitou (1025-1077, daughter of Guillaume V of Aquitaine), second wife of the emperor Heinrich III and mother of Heinrich IV, acting as her son's regent from 1056 to 1062. The church was completely destroyed in 1527. 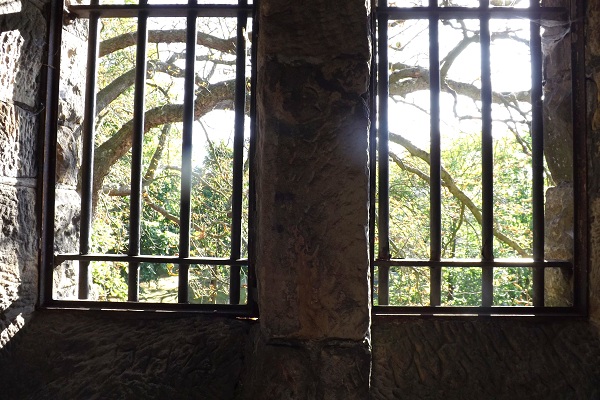 The chapel windows with signs of masonry

It is unclear whether Agnes used the chapel prior to the building of the church. It would predate the other first official mention of the existence of the chapel in a charte from 1167 which I could find. Agnes was known for her piety, but she had a chapel in the palatine seat, so there was not good motive why she should climb a rock (it had no stairs then) to pray – though she may have done so for exactly for that reason. 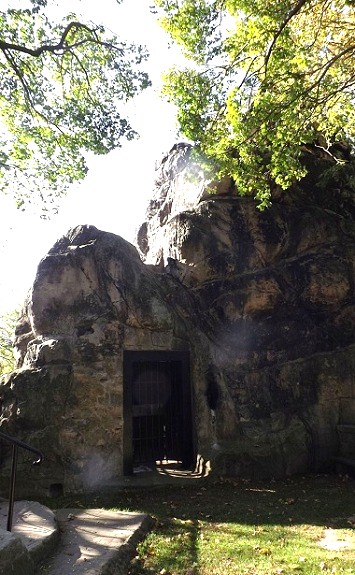 Entrance to the chapel from a different angle

The chapel was in use until the Reformation, though the hermitage had been abandoned earlier. Afterwards the chapel served as dwelling place. In the early 19th century it was restored as chapel with an alter dedicated to St.Mary in the wake of the Romanticistic revival, but fell in disuse again in the 1960ies. The chapel was renovated in 1983. 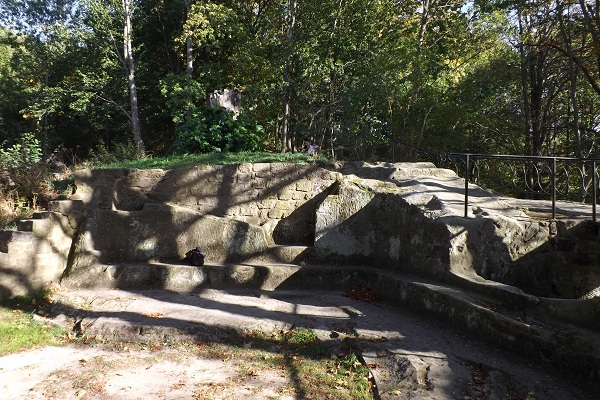 The terrace in front of the chapel

The cave in the rock base served as the hermit's abode, as mentioned above, and was later used as stable and as storage cellar. There had been an inn named 'Zur Clus' on the meadow in front of the cave since the 19th century, which was demolished in 1968. The innkeeper stored his provisions in the cave – the beer would keep cool there. 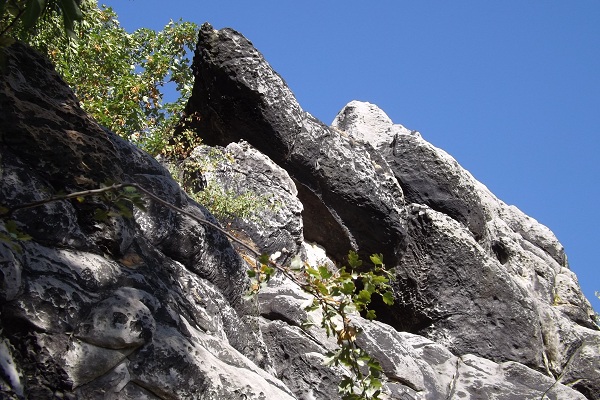 Besides the hermit's cave and the chapel grotto there are several more caves in the rock, some of them connected. They have beeen walled shut during the restoration work done by the Rotay Club in the 1980ies to prevent vandalism. 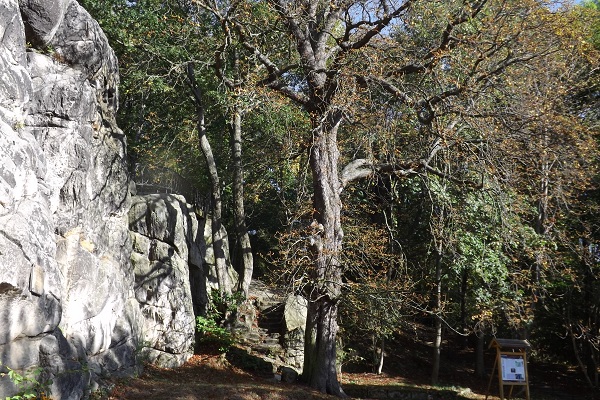 View to the rock from the south

There are legends and fairy tales connected with the Klus Rock. Unfortunately, I could not find any of those online; I'd have liked to share a story or two with my readers like I did for other such places. 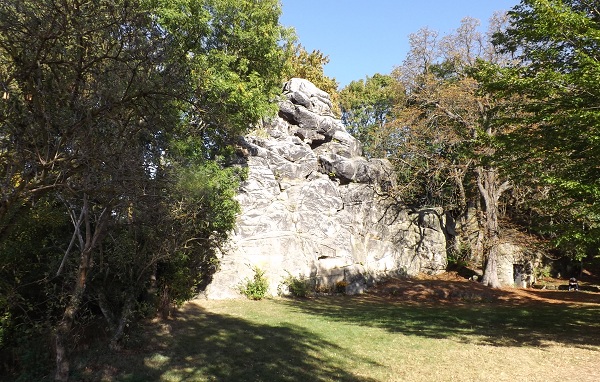 Another view of the Klus Rock