7 Oct 2018
Impressions from Rugia - Jasmund and Königsstuhl, Kap Arkona
The island of Rugia (Rügen in German) is a fine place for hiking and I did a good deal of that. Of course, I also visited the best known sites Königsstuhl (King's Chair) and Kap Arkona, the latter on a very stormy day. There are still tourists around this time of the year, but not as many as in summer. 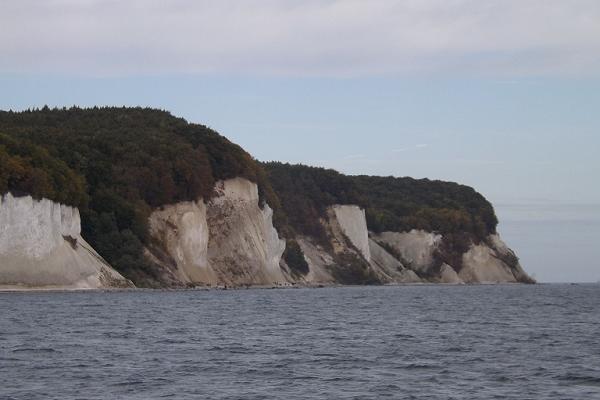 Chalk cliffs on the Jasmund peninisula, seen from the water

When you look at the shape of Rugia (see map) you'll notice that the mainland has 'caught' two other islands which are connected by small spits. The eastern peninsula is the Jasmund with its beech forests and chalk cliffs, the northern one is Wittow, a wind blasted land with few trees, but good ground for agriculture. The inland waters which are still connected with the sea are called Bodden, the largest is the Great Bodden of Jasmund. The spits are the 'Schmale Heide' in the south and the 'Schaabe' in the north, both with wonderful sand beaches. 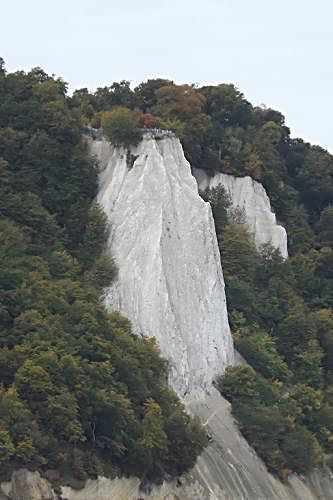 The famous Königsstuhl (King's Chair)
The Jasmund peninsula is a chalk plate that has been banked when the Baltic Sea rose, forming the famous row of chalk cliffs (more information about the development of the Baltic Sea can be found here). The chalk itself developed during the Late Cretaceous era 50-100 million years ago when Pangaea broke up and the area was flooded. The development of the spits by shifting sands happened about 3-4,000 years ago. 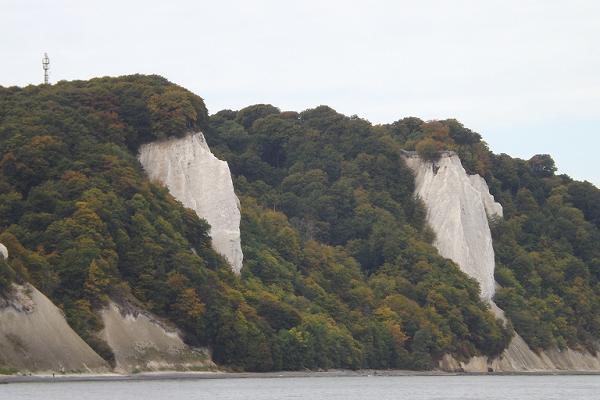 Viktoria's View (left) and Königsstuhl (right)
The part of the Jasmund between Sassnitz and Lohme has been created a National Park due to its beautiful beech forests and chalk cliffs. A good way to explore the cliffs is a ship tour from Binz or Sassnitz and from the landside. You can best see their scope from the water, but the walk along the cliffs offers the most pretty vistas. There are stairs and ladders leading down to the beach, but due to the ongoing autumn storms they are often in bad repair and closed off due to safety. 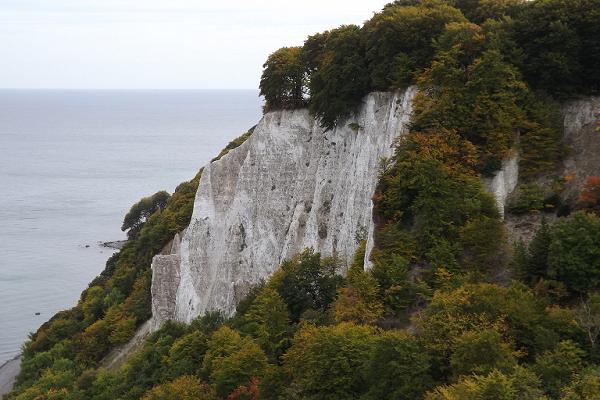 View from the Königsstuhl to the Viktoria's View
The forest and cliffs attraced tourists already in the 19th century. The cliff called Viktoria's View is named after the Princess Royal Victoria Louisa, eldest daughter of Queen Victoria and Prince Albert. She married the future German emperor Friedrich III in 1858 (he only became emperor in 1888 and died soon thereafter, succeeded by his son Wilhelm II) - another of the many British-German connections. Viktoria visited Rugia in 1865. 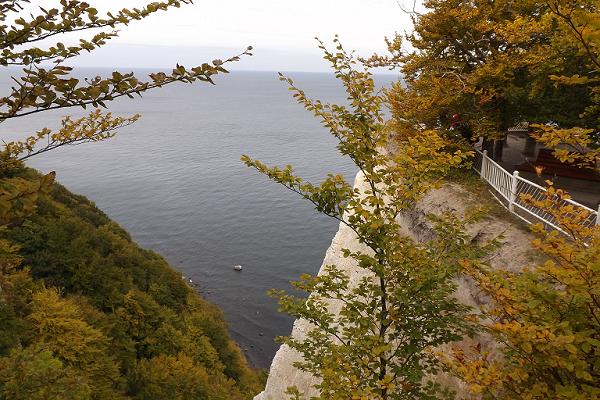 On the Königsstuhl
The most famous cliff, the 118 metres high Königsstuhl - King's Chair - is named after an old legend which tells that the man would become King of Rügen who first climbed the cliff from the beach and took his seat on a chair which had been put on the cliff. The legend is already documented in the 16th century, but Rugia had long since been a principality and the prince inherited according to primogeniture. 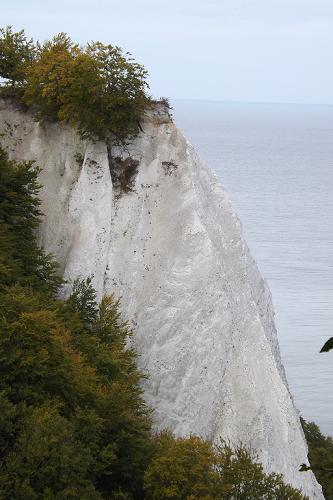 View from Viktoria's View to the Königsstuhl
You get a great view of the Königsstuhl by being brave and stepping out onto the little skywalk above the Viktoria's View. Fortunately, it was a day with less wind and the skywalk open, and I did feel brave enough. Barely. But the photos I got were worth taking some deep breaths and not thinking about the hundred metres drop. 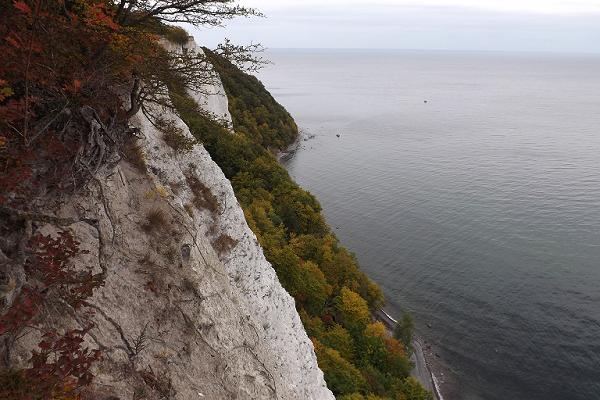 On the Viktoria's View cliff
Next I took a nice walk through the beech forest to a pretty little lake, the Herthasee (Hertha's Lake). That one, too, is connected with an old legend which goes back to Cornelius Tacitus' book Germania (~ AD 98). He describes the worship of a fertility goddess Nerthus / Hertha who drives around the land on a waggon drawn by cows, which is then washed in a secret lake. Everyone involved in the ceremony was killed afterwards. The Herthasee is one of the locations that claims to have been the lake where Nerthus bathed. It looks mystic enough, but there is no proof for it having been a religious site. Hertha's Lake
The German goddess somehow gave her name to the ringwall near the lake as well, though that one is clearly a fortification from the time when Slavic tribes settled on Rugia since the 6th century, succeeding and maybe driving off the Germanic Rugii who had migrated into the island in the 2nd century AD and later continued south to the Danube, where they are mentioned among the allies of King Attila in 451. The old name of the remains of the fortification was 'Borgwall' which simply means 'castle wall'. 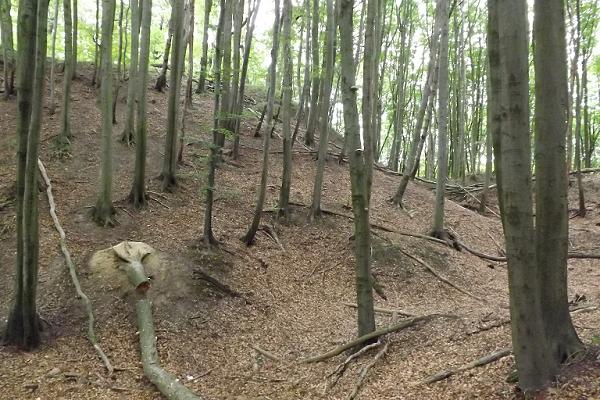 Hertha's Wall
The most important of those Slavic tribes were the Rani or Rujani who first appear in the chronicle of Widukind of Corvey, where they are mentioned to have participated in a battle against other Slavic tribes as allies of Gero, the margrave of the eastern march, in 955. The ringwall on the Jasmund is likely a bit older, dating to the 8th century. It was not part of the net of fortresses of the Rani on Rugia. 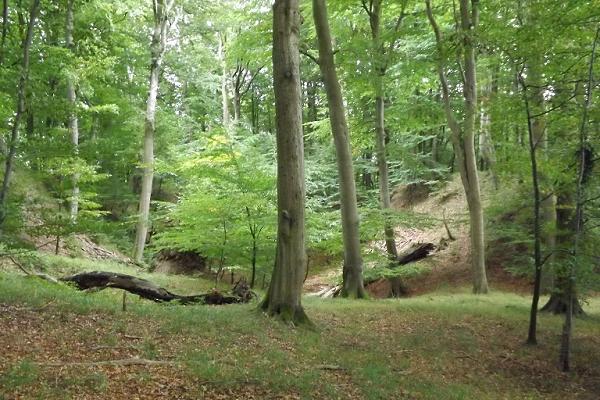 Inside Hertha's Wall, now overgrown with beeches
We continue to the Wittow peninsula where another famous chalk cliff can be found; the Kap Arkona. It is situated near the village of Putgarten from where you can either walk or take a little electric train. There is no parking lot at the cape (neither is one near the Königsstuhl; you have to do some walking). 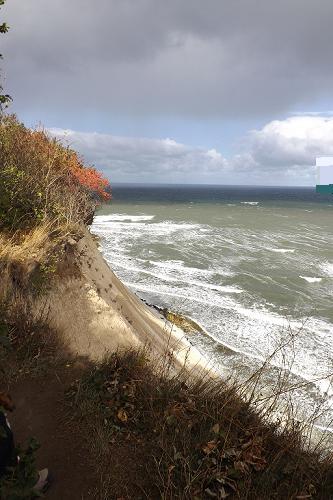 Kap Arkona
The day I went there a storm was raging and the lighthouse closed. But one could still get close to the cliff - after several people climbed a barrier and didn't get blown some 40 metres down into the sea, I dared to follow. *grin* 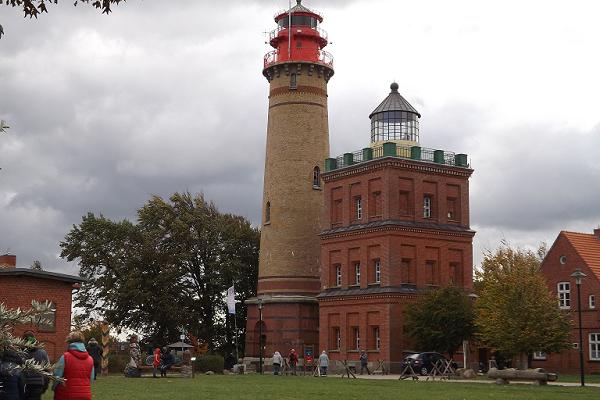 Lighthouses on Kap Arkona; the old one to the right
Kap Arkona is known for its twin lighthouses. The rectangular one is the older, built 1827 by the well-known architect Karl Friedrich Schinkel. It is quite pretty with its neo-classical brick facade, but with only 19 metres, it proved too low to be seen well. So a new one was erected in 1901; that one is 36 metres high and still in use. 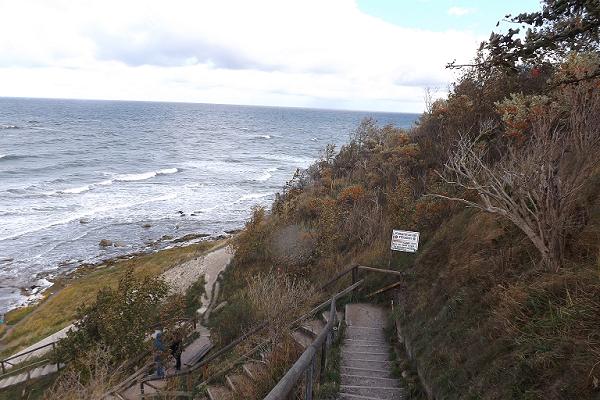 The way down the cliff
There is a way down to the beach (with rather rickety wooden stairs, truth be told), but with the high waves crashing ashore, it looked a pretty wet spot, so I went down but half of the way. 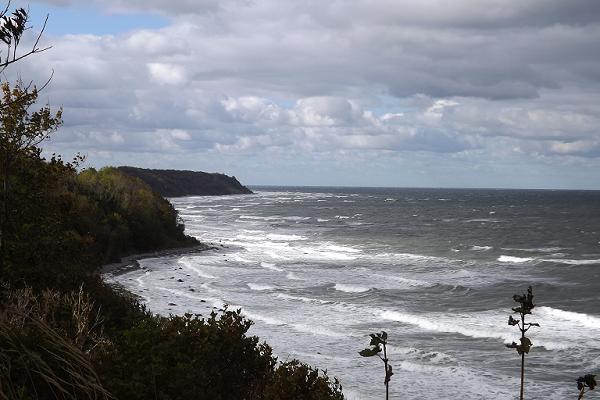 Storm around the cape
The Baltic Sea is non-tidal, so it's always there. :-) The ever changing mix of dark clouds and rays of sunshine made for some nice photos. I like the one above, though it doesn't really show the power of those breakers. It also doesn't come with the wind in you hair and the fragrant smell of seaweed and saltwater. It was a lovely day despite the storm. 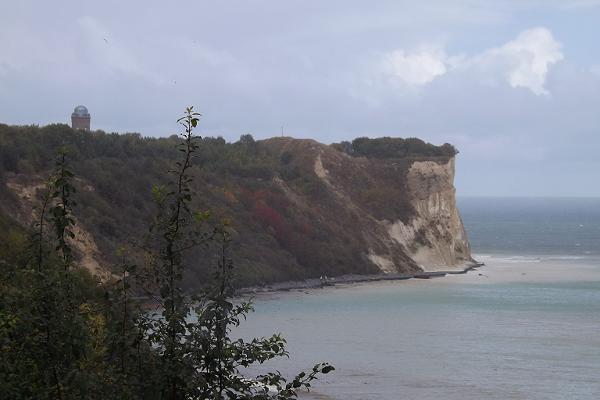 View towards Kap Arkona
This one was taken on the way to the village of Vitt and gives a good view of the cape. You can see the sand washed into the water below the cliff. The Wittow peninsula is a windy land even on calm days, and during storms, the breakers will eat the material out of the cliffs and wash it westward to add to the spit called Bug. If not a shipping lane between Rügen and the island of Hiddensee (the little sea horse to the left on the map linked above) would be kept free, that spit would long since have connected both. 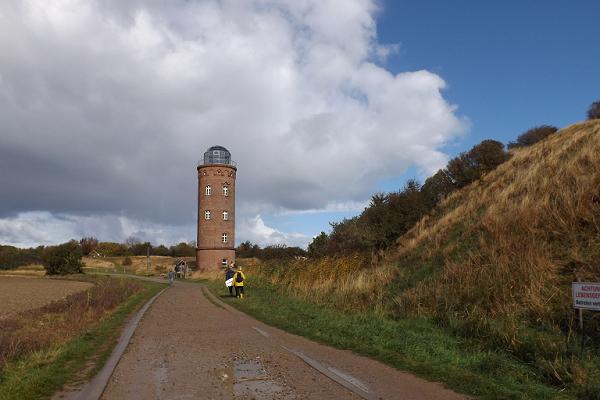 Marine navigation tower, with Jaromar's Castle to the right
There is a third tower near the cape, the marine navigation tower dating to WW2. Today it is used as exhibition and workspace for artists. To its right is another Slavic ringwall, usually called Jaromar's Castle. It once had been much larger, but the storms have washed part of it into the sea. The way on top of the remaining wall has been closed due to the danger of more bits breaking off. 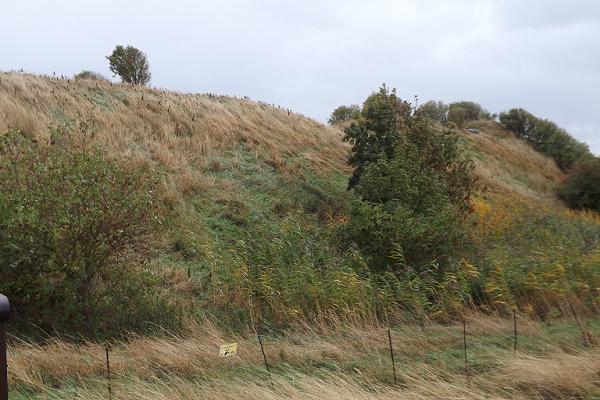 Wall of Jaromar's Castle
Jaromar's Castle was one of three main fortresses of the Rani on Rügen; the other two were the Rugard near Bergen (not much is left of that one; I've been there) and Charenza near Gartz. The castle on Kap Arkona - which may also have sheltered the main temple - was conquered by the Danes under King Valdemar I and Bishop Absalon of Roskilde in Juni 1168. The other castles surrendered and the prince and his entourage accepted baptism (and delivered most of the temple treasure to bishop Absalon). The prince became a vassal of King Valdemar. In the years to follow, Rugia and the adjacent mainland was created the 'Principality of Rügen' under Danish rule; it was Christianised and a monastery founded in Bergen. After the wars of the Rügen Succession, the island fell to the duchy of Pomerania in 1355. 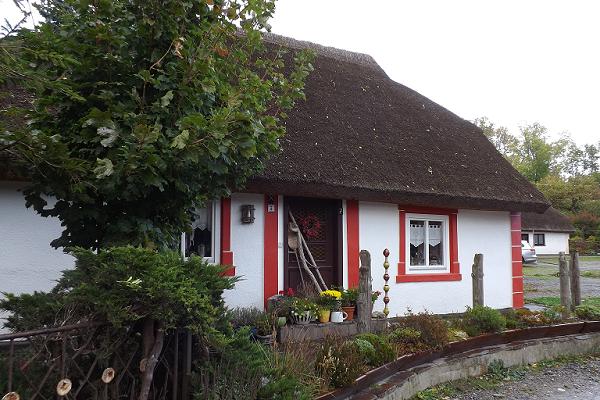 Old house in the village of Vitt
The charming little fishing village of Vitt, about a mile east of the cape, lies hidden in a cleft, surrounded by ash and elder, sheltered from the prevailing western winds and almost invisible from the plateau. The village retains its old, reed-thatched and whitewashed houses and has developed into a tourist spot. The place is no longer inhabited by fishermen and their families; instead there are restaurants and stands that sell knick-knacks. The houses are lovely, the commercialism less so. 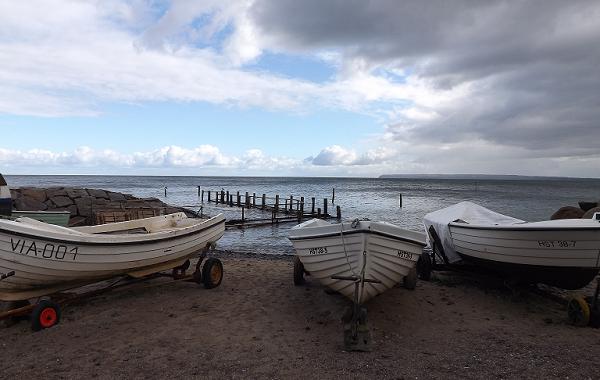 The harbour of Vitt
But the little harbour is a pretty place. One can see Kap Arkona from the beach, and listen to the song of the waves. Once the fishermen went out for herring, but it has become so rare that fishing no longer pays off. 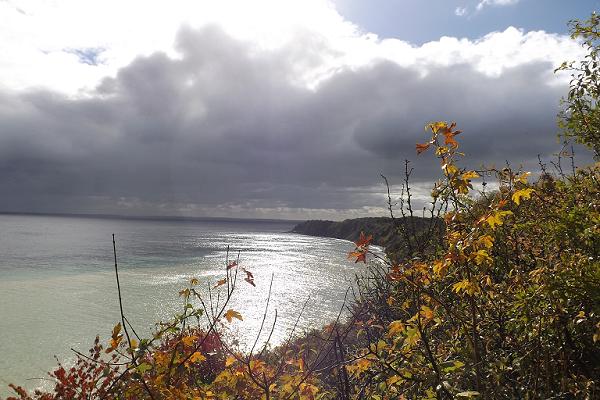 The next storm is coming
The next Rugia-themed post will be about Binz and the Granitz area, the 'Schmale Heide' spit, and a pretty Romanesque church in Bergen.   ¶ October 07, 2018

Comments:
Amazing pictures - nature at it's best! Thanks for the cultural references with the Slavic tribes as well.

You write well about topics worth reading. When I looked on Gothridge Manor's blogroll and saw you were posting about Ruegen and Kap Arkona, I HAD to check out your latest post. The Germanic and Slavic pagan history of the area is fascinating. Thank you for your shots of the Hertha Lake on the island- I hadn't known it existed. Decades ago, I had fun writing a paper about Nerthus, Hertha, Holda, Tannhaeuser's Venusberg, immersion in water, archetypes of women swimming around in German consciousness over many centuries. Sabine Baring-Gould's Curious Myths of the Middle Ages was helpful.

Thank you, Anerje and Karel.

Wow, this is just what I was looking for. I'm writing a fictional novel about the siege of Arkona where Jaromar is a main character (as well as Hilda, his Danish wife). Will keep an eye out for any future posts about the area/time period and hope to visit myself soon. Until then, I can almost see and smell it from this lovely writeup!

Thank you, Tiffany. And good luck with the Nano. :-)