30 Mar 2021
Summer Colours – The Bruchteiche Lakes near Bad Sooden-Allendorf
We all need a bit of summer greens and blue sky after the browns and dull yellows of winter (at least there were a few days of pretty white snow as well this year), don't we? So here's a picture post about a lovely little lake. 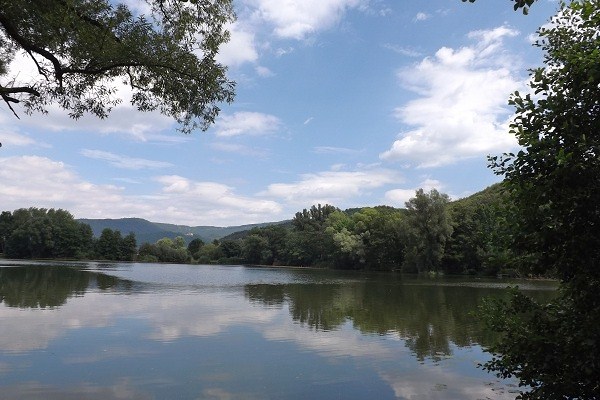 I could not find much information about the Bruchteiche (Bruch Ponds). They are two artificial lakes which were dug out in 1910 to cover the increasing need of drinking water in the nearby twin spa town of Bad Sooden-Allendorf which had prospered due to the salt deposits beneath the Werra for centuries.

The salt was extracted from brine by boiling; a method that continued until the early 20th centurly. 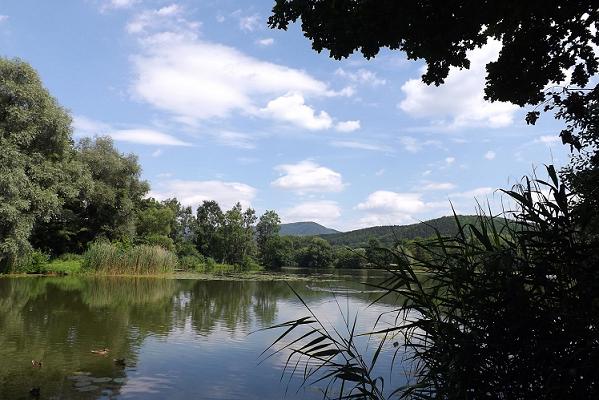 The salt deposits beneath the Werra river have been exploited at least since the time the German tribe of the Chatti settled in the area during the Roman attempts to conquer Germania (it is the first time saltworks are mentioned in the sources; see Tacitus).

The Werra often was a border river, so between the Chatti and Hermunduri who fought over the salt wells, and later between Hessia and Thuringia. When the GDR still existed, I could see the flood lights of the Iron Fence from the train that went along the river on the way to Göttingen. Luckily, I saw them from the western side. 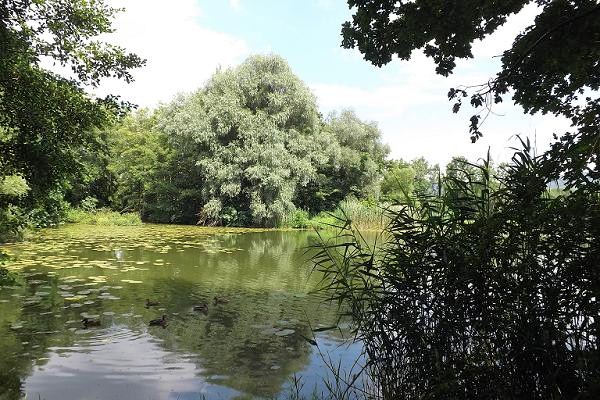 Charlemagne granted the the saltsprings, the income from the saltworks, and the market rights of the settlement – which was then called Westera – to the Fulda Abbey (charte dated to 779).

The settlement, which later was named Allendorf, was granted rights of a town in 1218. The income from the salt deposits enriched the burghers of the town; in the 16th century Allendorf was one of the leading salt evaporation ponds in Germany. The first graduation work was built in 1601. 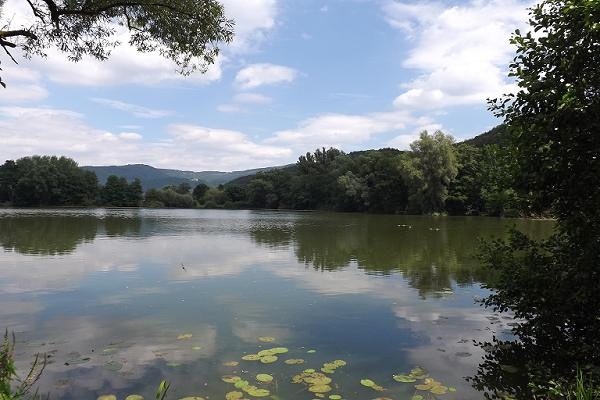 Water lily leaves in the foreground

In the wake of the Thirty Years War, the town was badly damaged and the salt trade declined, though salt was still produced in Allendorf. The town recovered, but never attained its former importance. The first bath house was built in the new settlement of Sooden on the other side of the Werra river in 1818.

Allendorf and Sooden lost their salt monopoly with the annexation by Prussia in 1866. The fall of the price for salt eventually led to the end of the salt industy; the last salt was produced in 1906. 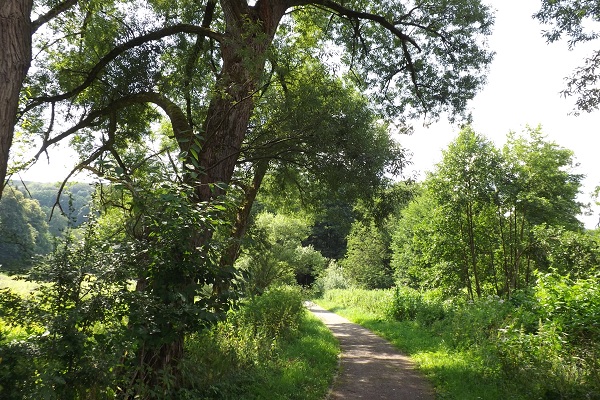 Way around the lakes

Meanwhile, the brine's healing properties had been discovered and the salt was brought to a new use in the developing spa industry. A large and fashionable spa with bathhouse graduation works etc. was built in 1881. The baths, the increasing population and the many guests of the spa needed a lot of water, therefore the Bruchteiche Ponds were created. 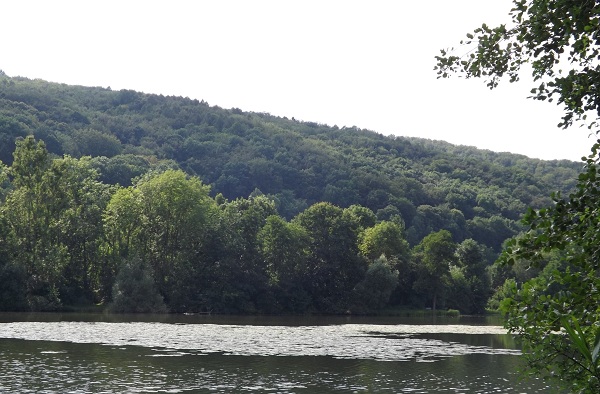 Ripples on the second lake

Today, the lakes are a nice recrational area with hiking paths and spots for fishing. The main fish species include carp, tench, eel, pike, pike-perch, perch and various whitefish. Some artificial peninsulae make access to the shore easier.

The lakes are surrounded by a belt of trees, shrubs and – in some parts – of reeds, followed by fields and meadows, with forests to the south and west. Beyond the lakes and the valley rise the hills of the Unteres Werrabergland which surround the Werra valley between Treffurt in Thuringia and Hedemünden in Lower Saxony. 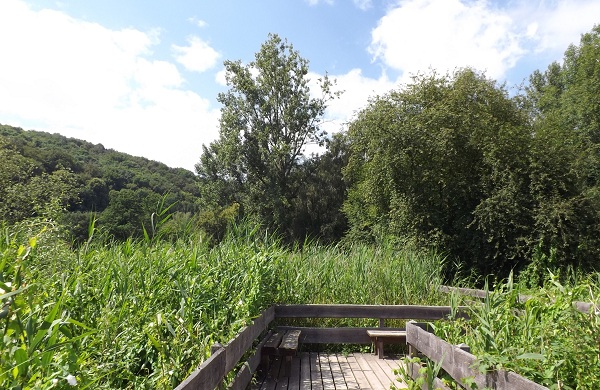 If you wonder where all that salt comes from, let us do some time traveling. Whoosh, 260 million years back to the Late Permian. What is going to become Europe was hanging out at the equator as part of Pangaea. There was a great inland sea, the Zechstein Sea, located in the rain shadow of the Central Pangaean Mountains. The Zechstein Sea extended from what is toady the North Sea and the lowland areas of Britain to Germany (about the line of the Main river), and northern Poland. The climate was hot and arid, so the water evaporated and left behind layers of salt. This happened in several steps with marine transgressions adding more water and salt. 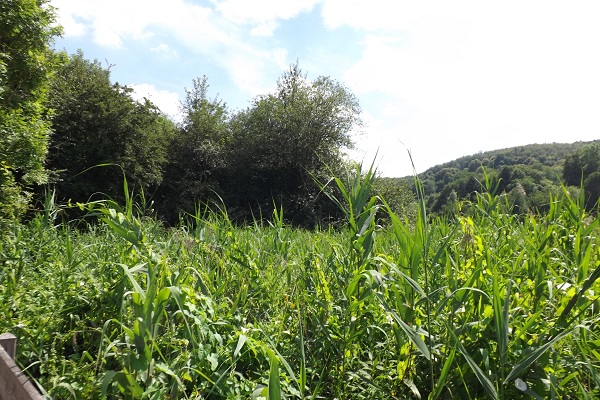 Reeds at the shore of the lake

The hills of the Unteres Werrabergland are Bunter sandstone and musselkalk which, together with Keuper, form the German Trias supergroup. About 250 million years ago, a connection opened up between the Zechstein Sea and the Paleo-Thetys Ocean. The resulting inflow of seawater under different climatic conditions (colder and more humid) caused the sedimentary rocks to develop in shapes of large alluvial fans. The new Germanic Basin encompassed the area of the former Zechstein Sea and extended further south to the Netherlands and southern Baltic Sea (~ 250-200 million years ago). Where those rocks have eroded or been washed out by rivers, the zechstein salt deposits have come close enough to the surface to be mined. 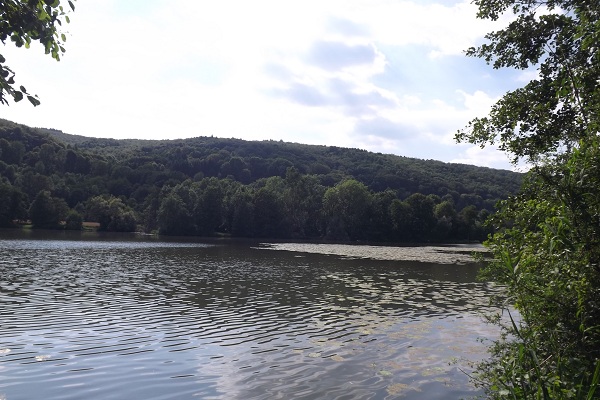 The Hannover Cliffs at the Weser belong to the same geological formation. Bunter layers of the Germanic Trias can also be found in parts of the Harz mountains, esp. the northern Harz where the Saxon Orogeny (150-69 million years ago) developed a fault that pushed the old buntsandstone over the younger Jurassic strata. 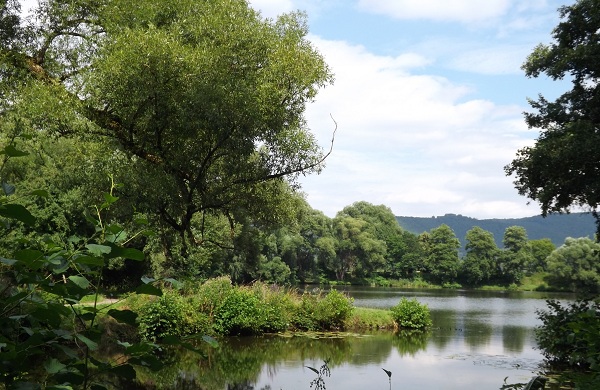 On a hill near the lakes is an Early Mediaeval ringwall fort, mistakenly dubbed Römerlager, though it has nothing to do with the Romans. Near the fort are also several burial mounds dating the the middle Bronze Age (1600-1200 BCE). I've visited both sites, so there might be photos some day.   ¶ March 30, 2021