30 Dec 2018
Impressions from Rugia - The Seaside Resort Binz
Binz is the prettiest of the seaside resort towns at the beaches of Rugia. It started out as fishing and farming village in the Middle Ages (its first mention on a tax collection chart dates to 1318). 'Byntze' belonged to the Principality of Rugia which later became part of the Duchy of Pomerania. After the Thirty Years war, the island came to Sweden until 1815, when it was integrated into the Prussian province of Pomerania. 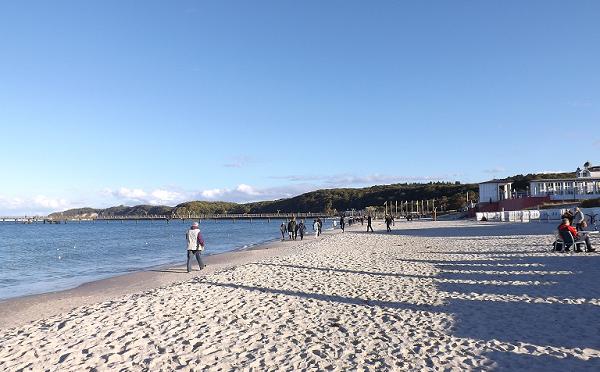 The beach at Binz

In the early 19th century, Rugia was governed by Wilhelm Malte Prince of Putbus (1783-1854), first in service of the Swedish government and later as Prussian governor-general and president of the regional council. He achieved a lot of building work on the island (more about him in the next post). 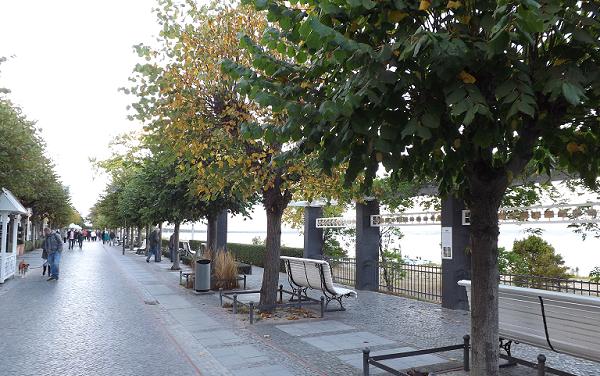 The promenade in Binz
Wilhelm Malte liked having guests and he obviously like swimming as well. Since about 1830, he and his guests bathed in the Baltic Sea; the beginning of a veritable fashion that peaked in the 1870ies. At that time, Binz became a popular seaside resort. Pretty lodging houses were built, the pier, the spa house, the promenade .... But Binz still remained a charming town without large hotels, and I really hope they will never allow for those ugly concrete monstrosities to be built there. 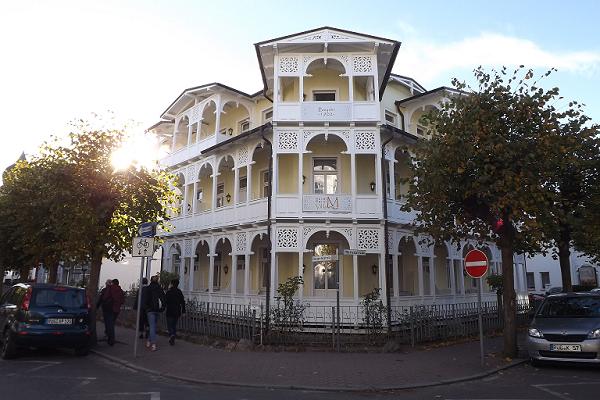 One of the many pretty houses in Binz
Fortunately, the town has been restored to its 19th century splendour after the German reunification. The houses with their lovely carved wooden balconies and decorations, usually painted white or in pastel colours, have become an attraction of Binz (and other seaside resorts on Rugia). 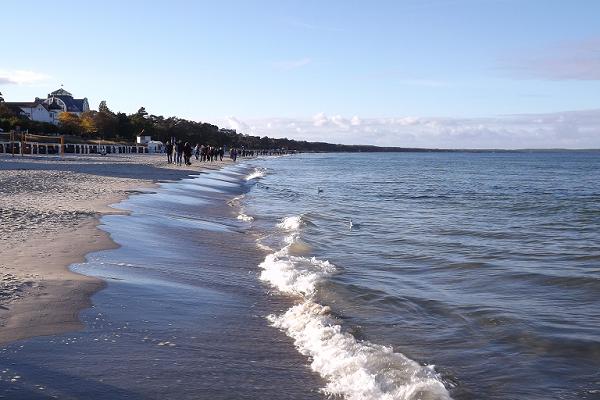 Walking in the surf
I love the Baltic Sea ever since we used to spend the summer holidays there during my childhood (usually in Timmendorf which was nice, but did not have the typical resort architecture like Binz). So the town was different, but walking along the beach felt very much like coming home. 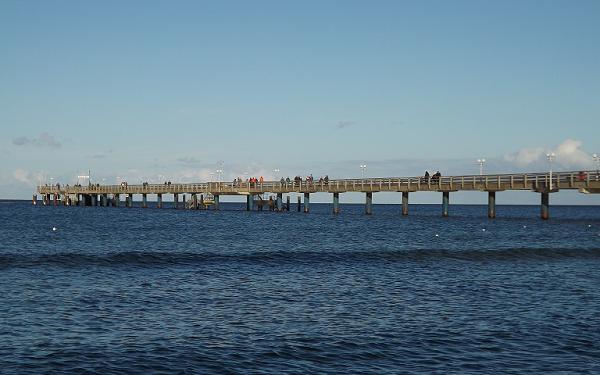 The pier of Binz
The first pier at Binz was built in 1902. At the time, most guests still arrived by ship and had to be transfered - together with all those big trunks - to smaller boats out at sea. The pier allowed the ships to dock directly. The first one was made of timber and 560 metres long. It was destroyed by a storm tide only two years later and immediately rebuilt. But in 1912, a severe accident happened when the pier broke down as the guests of a steamship disembarked; 17 people died in the water. 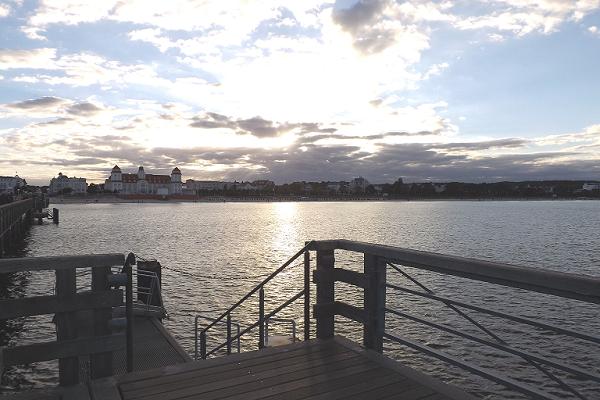 On the pier, looking towards the town
When the Rugia Causeway was built in 1937, allowing cars and trains to directly cross to the island from Stralsund, the need for a pier decreased. The existing pier was neglected and collapsed in 1942. It was not restored until after the reunification. The new pier, built in 1994, is 370 metres long and 3 metres wide. It serves mostly as jetty for cruise vessels, like the one I took to visit the chalk cliffs. 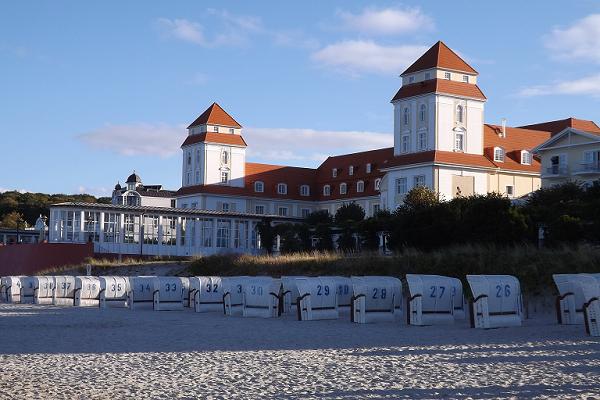 The Spa House (Kurhaus)
The first spa house in Binz had been built in 1890. It was a timber construction that burned down a few years later. A new one, this time of stone, was erected in 1907. It survived WW2 intact and served as quarter for Russian and later German soldiers. In 1960, it was returned to its original purpose as spa house for tourists in the GDR. The building was renovated after the reunification and today houses a high class hotel and restaurant. 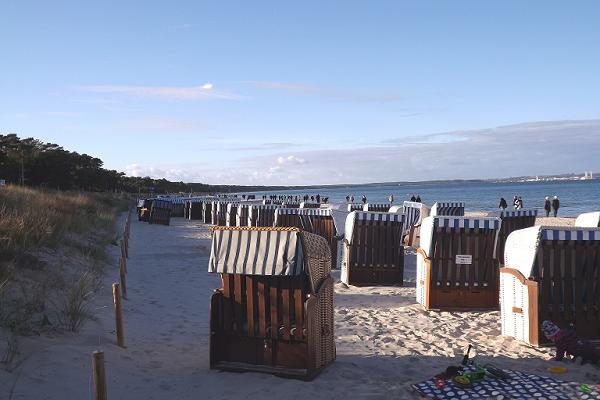 Hooded beach chairs (Strandkörbe)
Now let's get to something very typically German: the hooded beach chair aka Strandkorb. You can find those all over the beaches of the Baltic and North Sea at the German coast. The special chair was invented by the basket maker Wilhelm Bertelsmann in 1882. One of his customers suffered from rheumatism but still wanted to enjoy the healthy sea air. Bertelsmann constructed a special two seated hooded windbreak - with adjustable hood, extendable footrests, sun awning and sidefolding tables - made of wood, wicker and canvas. The chair was a great success and soon in demand by other tourists. 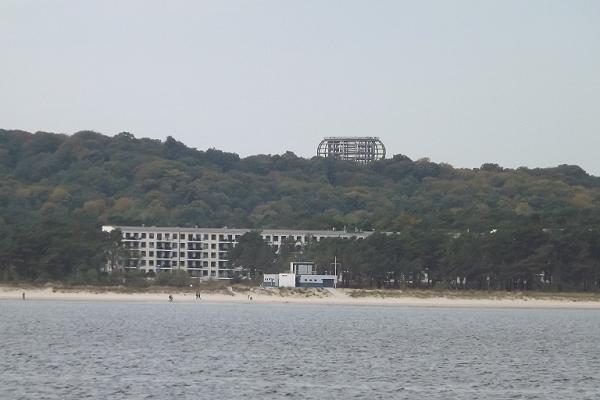 A glimpse of Prora (on the spit north of Binz), from the ship
Prora is one of those huge Nazi building projects, intended as beach resort. The whole concrete structure, consisting of eight housing blocks, stretched to a length of 4.5 kilometres (2.8 miles). It should have provided space for 20.000 beds, offering affordable holiday package tours by the Strength Through Joy (Kraft durch Freude) project. But work on the coloss halted with the beginning of WW2 in 1939. After the war, parts of the building were used as Soviet and East German military base, others dismantled. Today, about 3 kilometres (1.9 miles) of the structure remain, listed as heritage. They are being brought to modern standards and turned into rather expensive appartments, a youth hostel and other uses. 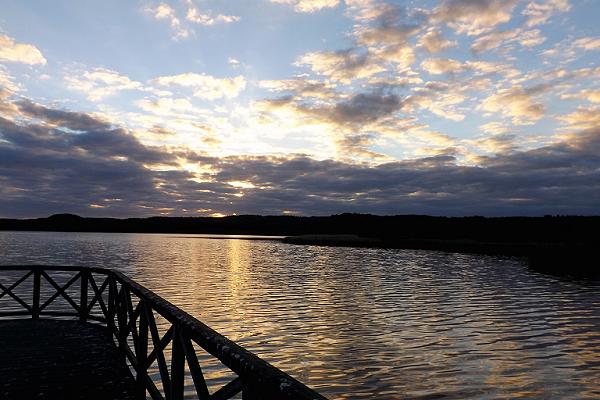 Sunset at the Lake Schmachte in Binz
The Lake Schmachte, a lake at the landside of Binz which is the nesting site for a number of birds. It shores are a protected area, to the little pier is pretty much the only place where you can get close. 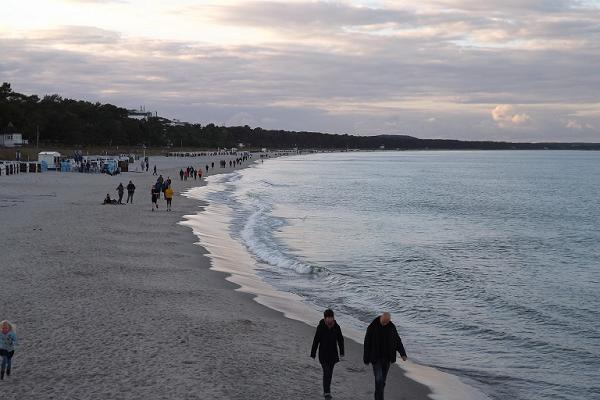 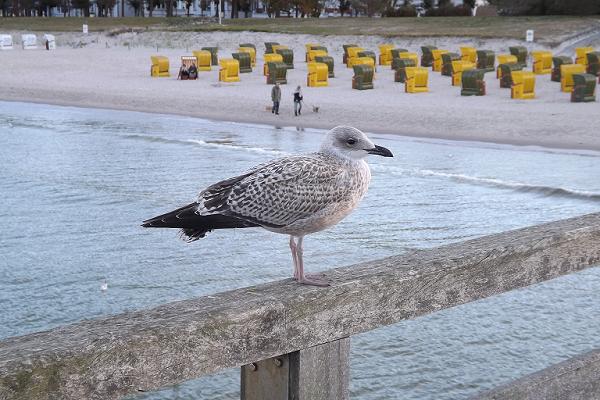 Comments:
Another lovely post A very Happy New Year to you ... may it be filled with joy, good health and inspiration.

Thank you for sharing your trip with us! The beaches look lovely. I'm glad parts of that concrete monstrosity are being preserved, for the sake of history, but I've never understood why people fell so much in love with concrete in the 20th century, and used it so hideously!

Hi Deniz, welcome to my blog. I think Prora is one of those monsters dictators love to build, all the way from Nero's Golden House to the oversized representative buildings of some Eastern European dictators like Ceausescu. It is known that Hitler had some grand plans, esp. for Munich and Nuremberg, after the 'final victory'. Those would have made Prora look like a summer residence. ;-)