12 Feb 2012
The Baths That Never Were - The Imperial Baths in Trier (Part 1)
Salvete amici. I think Gabriele is in trouble this time. ;) That sneaky girl told me I should write about the Imperial Baths in Trier, and I was really looking forward to some nice … erm, research while soaking in hot water; a good place to be in that weather we got right now - I had no idea it can get so cold in Germania. But it came to nothing and I'm sure she knew that. So instead I had to wrap myself in a double layer of socks and mittens and face that damn cold.

*I hope our dear Aelius Rufus can hold his spatha, wearing a double layer of mittens.* 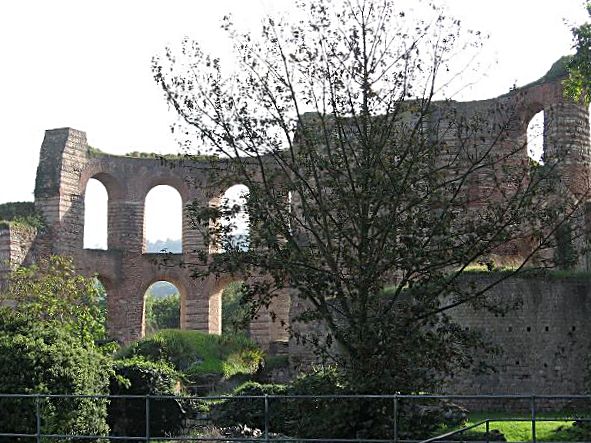 Imperial Baths in Trier, view to the caldarium

The Imperial Baths (Kaiserthermen) is another of those projects that was begun when Trier became Imperial residence. Big fancy public baths had been prestige projects for quite some time, and the second - and also impressive - leisure centre, the Barbara Baths, was about 150 years old already. Still in good shape, mind you, but well, towns always tend to build newer and bigger public and governmental buildings than they really need; that hasn't changed during history.

So Maximinianus started the project. With a size of 250 x 145 metres, the baths covered the site of 4 insulae and were intended to become one of the largest leisure centres in the empire. The insulae were taken down, no matter that at least one of the buildings wasn't some run of the mill apartment block but a posh villa (with a bath of its own). No idea how the emperor convinced the owner to part with the land. 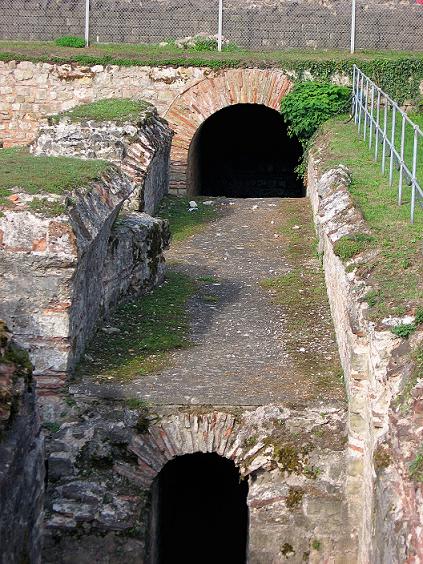 Access to the water system was particularly easy in that part of the town which probably was a reason for picking the site. At first, work progressed nicely; the subterranean tunnel system for heating and water supply as well as the maintenance tunnels was finished, and some of the rooms and halls built, progressing from east to west. So we got thecaldarium (hot bath), tepidarium (warm bath), and the foundations for the palaestra, the large, walled yard where the guests of the baths could do gymnastic exercises or just sit and have a talk with the neighbour.

But then Constantine moved his seat to Constantinople, likely took all the money with him, and the baths remained unfinished. The water pipes never were installed, the frigidarium (cold bath) and the planned buildings lining the inside of the palaestra walls, as well as the entrance hall, never were completed. And that's why I could not do any research in hot water there.

The baths remained an unfinished building for some 50 years. Then Flavius Gratinianus (375-383) became emperor and returned his attention back to Trier. He took a close look at the baths, decided the town didn't really need any more of those but that it would be a waste of good Roman concrete not to use the buildings that already were there. And since they were pretty close to the Imperial Palace, they would make a good garrison for his mounted bodyguard.

So the unfinished frigidarium was deconstructed to enlarge the palaestra, the rubble was used to fill in the heating and water tunnels, the rooms beside the tepidarium and the hallways were divided into lots of small chambers and stalls, and a military bath house was added on the north side. Military baths, seriously. I can use those everywhere.

My dear Aelius, you're spoiled ever since you visited the leisure centre in Caerleon. 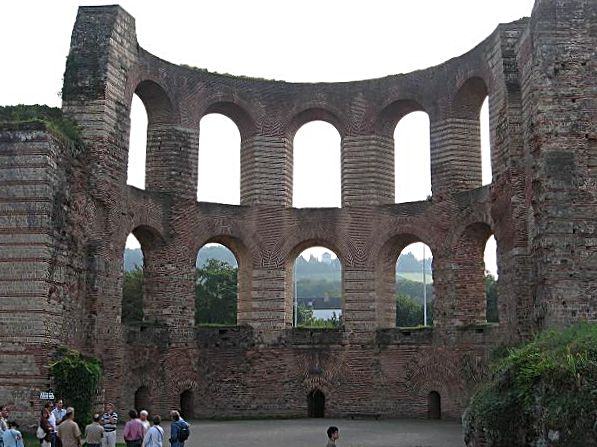 Closeup of the - partly reconstructed - main apsis of the caldarium
The former caldarium with its three apsides and its anteroom most likely served as shrine of the standard and exercise hall, the tepidarium as entrance, and the small rooms around the yard as living quarters and stables. The building would have offered sufficient space to house about 800 - 1000 men and horses of the mounted guard. The got a few decorative marble plates and frescoes as an extra. Public baths are usually prettier than garrison buildings. :)

The roofs of the various halls were vaulted and, as the up to 7 metres thick foundations allow to conclude, of impressing height. 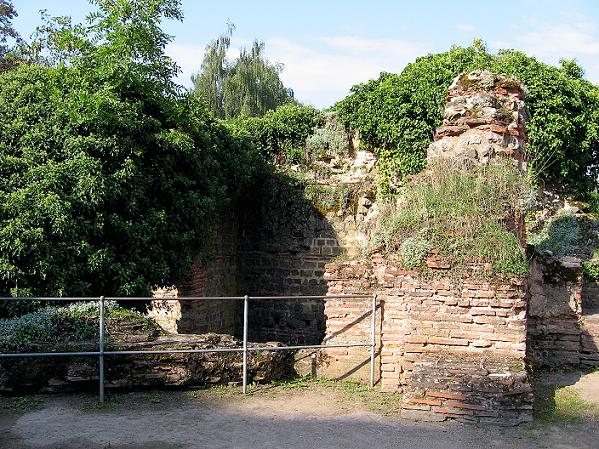 Some remaining walls (southern sudatorium)
If the baths had ever been used as such, the visitor would have entered them through an entrance hall leading to the palaestra and crossed it - or walked along the colonnades at the walls - to the baths proper. He (or she) would undress, put their clothes in a locker and clean the body with oil and a strigil or scraper. That's the difference today, Gabriele tells me, now the bathing or showering is to get clean and oil, if used, to soften the skin, while in Roman times the oil was used for cleaning and the baths were for relaxation.

Next steps would be the sauna (sudatorium) - both the dressing rooms and the sudatoria existed in double on both sides of the main halls - then the hot bath at the point of the triangle shaped layout of the baths, next the tepid bath (located between the sudatoria) to slowly cool the body, and last the cold bath in the frigidarium. The latter was never finished in case of the Imperial Baths in Trier, but it is was planned to be of the same size as the Aula Palatina. Most modern public pools could hide twice over in such a hall, Gabriele says. 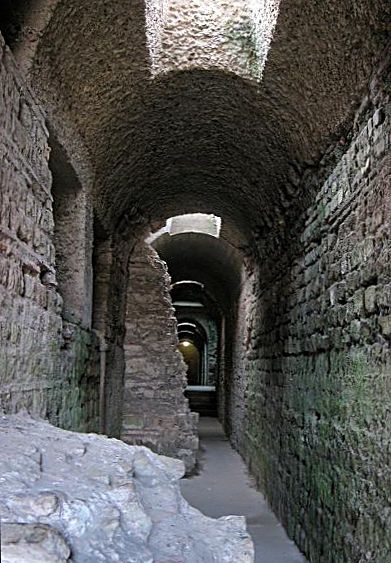 (To the right: Underground maintenance way)

Baths like these can only work with a sophisticated heating system and, in lands with temperatures like we got those last days, also a good insulation. Of course, the baths had a hypocaust heating like we've seen several times already. The floor rested on little brick pillars, and hot steam from large fires would fill the caverns between the floor of the rooms and the ground below the brick pillars. The hot air then went up in tubes the inside the cantilevered walls; the space between the walls proper was filled with pottery and brick shards (how's that for recycling) which are good conductors of heat. That way the marble lining would not suffer condensation either. The system is the same as the one used in the Aula Palatina.

But what about those huge windows, you may say, didn't they let cold air in from the outside and make the halls draugthy as a Scottish castle? Well, the Romans - other than most Scottish lords - had double glazed windows. The making of glass can be dated back to at least Bronze Age Egypt (ca BC 1450) if not Mesopotamia (glass pearls, BC 1600), but it was the Romans who developed clear glass by adding MnO2 to the melting and who used it for windows and not only decorative items. The windows were of the crown style set in metal frames, and that way it was possible to cover even the large windows of the Imperial Baths or the Aula Palatina. And the Romans also figured out that double glazed windows kept the cold out and a greenhouse climate inside the baths.

We don't know if there was a wooden gallery to get to the windows higher up, but it seems likely that some sort of access was possible. The upper part of the caldarium apsides is a reconstruction and possible holes for beams may have gone missing in the rubble of the old walls.

There were several boiler houses, praefumia, to provide the steam for the heating and the warm water. The two storey labyrinth of tunnels had been completeld, and partly filled in when the baths became a garrison, during Roman times, and thus is pretty well preserved today. It's also one of the features that makes it possible to guess the layout of the never finished, or altered, parts of the building. 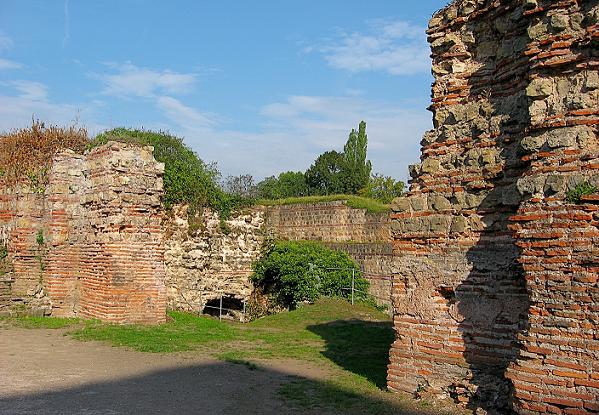 Some remaining walls in the Imperial Baths
The lower storey was the place for the fresh and waste water and heating systems, while the upper storey were maintenance tunnels - very narrow spaces as the picture above shows. Those are partly open for visitors today. The other large baths in Trier, the Barbara Baths, have only one layer of tunnels.

The tunnels were accessible only from the outside, thus completely separated from the visitor part of the baths. It's nice to get a glimpse of those from the future because in my time I'd never have gone inside such a place. Not even in a bath that wasn't a bath.

The post-Roman history of the Imperial Baths can be found here.

Comments:
We should thank the Romans for the Art of Bathing.
Always makes me feel better about my shelves of bath stuff and the time I spend in the tub.

They were such incredible builders. Impossible is not Roman, lol.
:-)

I wonder if the horses got to bathe in the fort-bath. *g* Neat pics, they really help me with pondering How Things Used To Be.

Sam,
definitely not. Just look at those aquaeducts.

Lol Constance,
I doubt it. I suppose they'd have let the horses swim in the Moselle which is just on the other side of the (Roman) town.

I'm with Bernita about being greatful to the Romans for the art of bathing. Hubby and I were discussing the British and how people didn't bathe often the other day. It must have been incredibly smelly during some of their parties - the ones that were a sad crush.

Living in Roman times might have been more fun than living in the Middle Ages or the 17th century, I'm sure. Roman medicine was better, too.

I spent a year at the University in Trier. I wish I'd met you. You really know how to make history interesting! Thanks for the short lesson.

Can't help wondering if the owner of the original villa was annoyed that his house had been demolished for a grandiose project that never even got finished...

Very interesting that the unfinished baths complex was converted to a quite different use by a later emperor. I wonder how often that, or something like it, happened elsewhere and the evidence hasn't been preserved.

Carla, I wonder about that former villa owner, too.

There's another example for reuse of a building for a different purpose (other than a church) in Trier, and I won't be surprised to hear about more such examples from the Roman world.

I agree with trish; you make history very interesting! I wish you had written my history textbook. It would have been amazing then!