14 Mar 2021
Another Little-Know Romanesque Church – St.Mary in Wilhelmshausen / Fulda Valley
St.Mary's Church in Wilhelmshausen, a village in the Fulda river vallley not far from Kassel, was not exactly a chance find since had I learned about its existence when I researched the history of Castle Sichelnstein. So I put the little beauty on the list for a time we would come into the area – which happened during the tour to Castle Grebenstein. 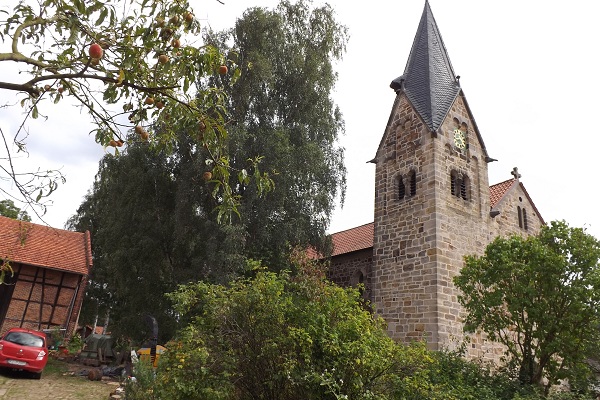 View to St.Mary in Wilhelmshausen

The amount of obscure Romanesque churches that dot parts of Germany is due to the fact that they were belonged to monasteries in the Middle Ages. Monasteries served as focus points of Christianisation and learning, furthered cultivation of the land, were part of the itinerant royal court – together with the palatine castles – and sometimes served as place of retirement for a dowager queen or career choice for a daughter (abbesses could hold a surprising amount of power). 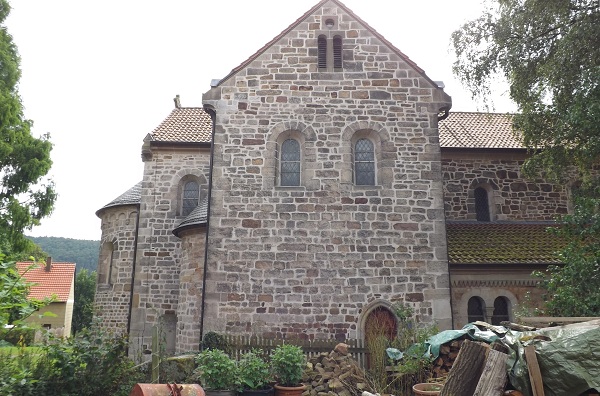 Most monasteries in the Protestant parts of Germany were secularized in the aftermath of the Reformation, the buildings dismantled or modernised and given new use from farmsteads to palaces, depending on historical circumstances. Even Catholic monasteries became less important with the decline of the attraction of a monastic life; many of those were abadononed or given over to an different purpose as well.

But the churches – which after all, are sacred places – remained and continued to be used by the local population. A number of them became Protestant churches. 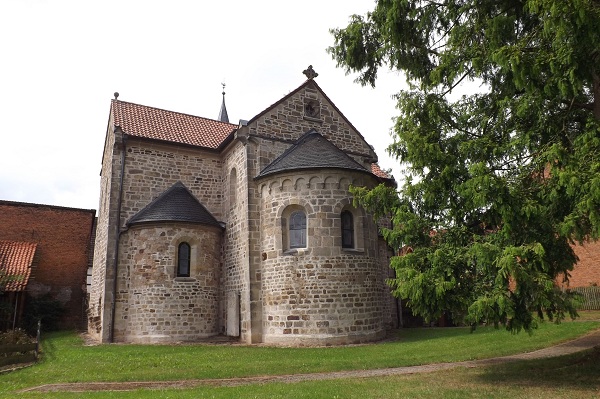 The church in the Romanesque basilica style was buit as part of the convent of Wahlshausen (old: Walehusen) in 1142-1150. The nunnery obviously stood under the protection of the archbishop of Mainz, Heinrich I. A local benefactor is not known, which implies that the land may have been in royal possession at the time (the reign of Emperor Konrad III of Staufen). The nuns of Wahlshausen were either Cistercians or Benedictines; the information I could find about the church disagrees on that point. 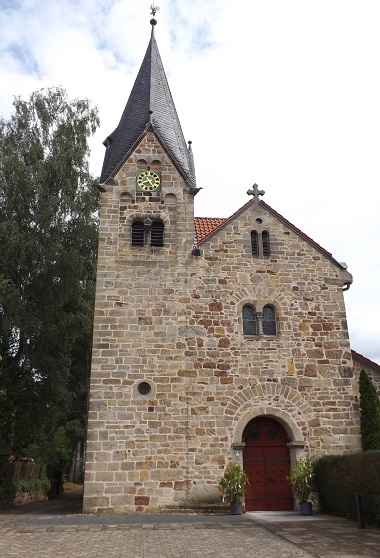 The 12th century westwork with the belfry from 1891 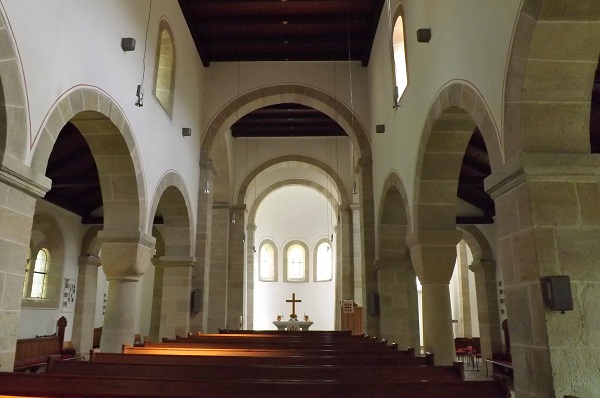 The event that induced my interest in the church was the burial of one Count Bardo of Sichelnstein in 1239; at a time when Wahlshausen was still a convent. One might wonder why he chose a nunnery as burial place – maybe he was a benefactor of the convent, or some female family member lived in the convent and saw to a resting place of the last male member of that house. 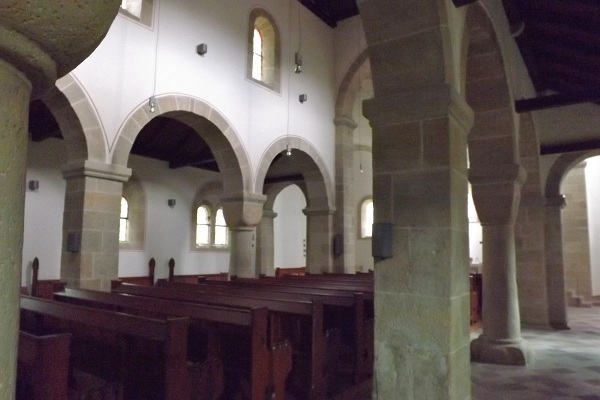 Interior, view to a side nave

The monastery was secularised in 1525. It had been in decline already before, and the buildings continued to fall into disrepair. An engraving of the time shows that the side naves of the church were basically ruins though the chuch was still in use – its first Protestant curate was a former monk of the monastery, Cunradus Satte.

In 1572, Landgrave Wilhelm IV of Hessia gave the land and possessions of the former monastery to new settlers. From that time on, the village took the name Wilhelmshausen. The church was renovated in 1588. 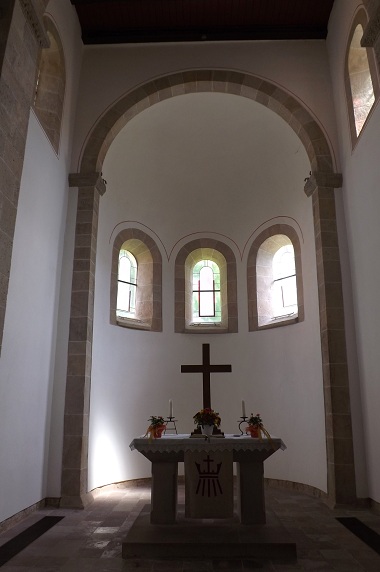 The church was badly damanged during the Thirty Years War twice, and suffered from another fire in 1769 (the exterior stone walls mostly survived, but the interior, benches, roof beams and such, as well as the glass windows were destroyed). But the church remained sufficiently important for the landgraves of Hessia – and likely the people in the surrounding villages as well – to put their money and effort into the repair every time. 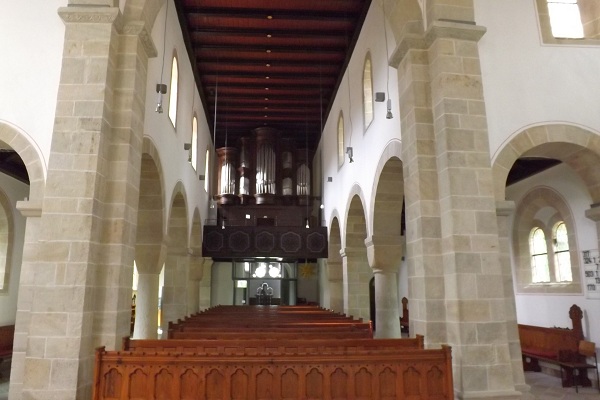 Main nave, view to the organ

King Jérome, one of Napoleon's brothers, also known as King Merry (König Lustig) in Germany since he liked his parties, must have had a soft spot for old churches. It was he who gifted the fine Rococo organ and the decorated gallery to the church (it came from another monastery in Wesphalia). We remember, he also took an interest in the Romanesque church of Gehrden 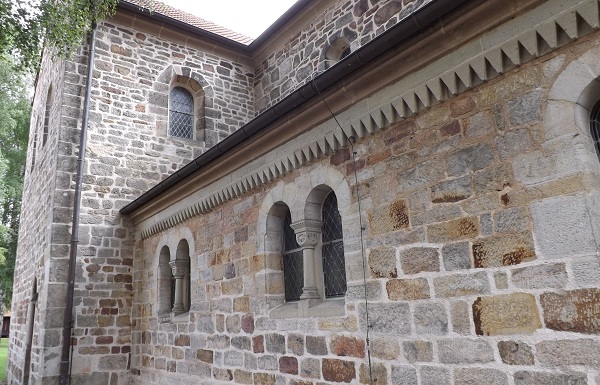 Exterior, detail of the reconstructed side nave

The organ survived another fire from 1891 which was caused by a lightning stroke. After that one, the church was restored to its original three naved pattern and a belfry tower was added to the westwork (belfry towers are part of the westwork in German churches, not separate towers like you can often see in England, Belgium and France). The original Cistercian church had no tower. 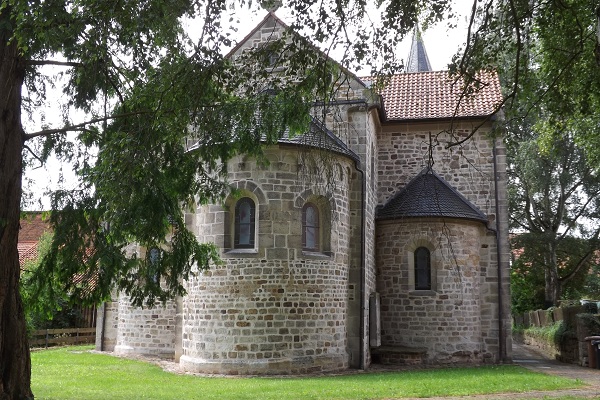 The – partly restored – triple apse seen from a different angle

The church was again damaged, this time by water, when the Edersee reservoir dam was bombed in May 1943 and 160 million m³ water rushed down the Eder valley into the Fulda (the Eder is a tributary of the Fulda) and thus all the way into the Weser. The water stood up to 1.20 m inside the church which caused damage to the walls.

Repairs took place in the 1950/60ies and again in 2002 to 2007, with a thorough renovation of the church, including the walls which showed some cracks, the roof, the addition of drainage outlets, and a new interior furnishing. 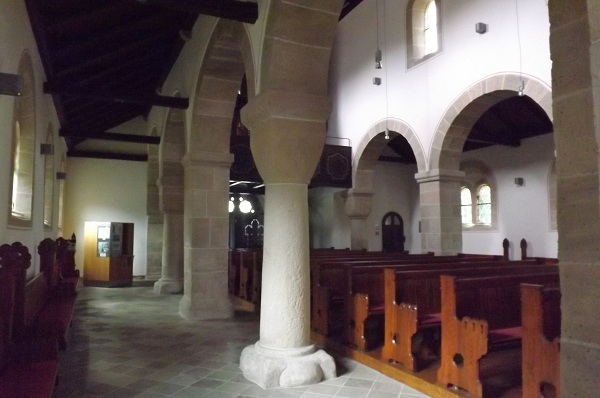 Interior, side nave with alternating supports

The repairs and reconstructions in the 1890ies and 1950ies also restored the Romanesque design of the church. I already mentioned the re-addition of the side naves. The transept with the crossing towerlet had also been added at the time. During the second restoration the alternating supports of the naves were more clearling distinguised.

Alternate support or Rhenish support means the alternating between a sturdy, usually quadratic column with a lighter round pillar to support the archs (the Lower Saxon support alternates one column with two pillars). 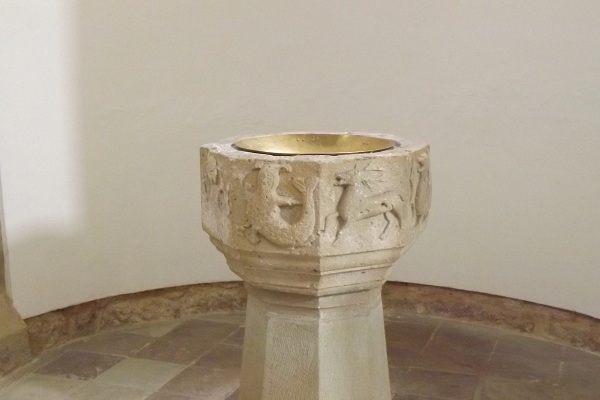 One treasure survived all the wars, fires and floods: the 12th century Romanesque baptismal font. It is an octagonal bassin decorated with stone carved figures; a giant fish, a stag, a dragon. The stag is the symbol of Jesus Christus fighting the forces of Evil, represented by creatures from mythology.   ¶ March 14, 2021