19 Aug 2019
A Hansa Town under the Rule of Denmark and the Teutonic Knights - The History of Mediaeval Tallinn
Tallinn, the capital of Estonia, had not always been known by this name. The 13th century chronicler Henry of Livonia called it Lindanisia and the surrounding country Revelia. The latter name would then be used for the town: From the Danish conquest in 1219 until the Estonian independency in 1918, Tallinn was known as Reval. Taani-linna, Danish Fortress, was the Estonian name for the castle on the hill in the town, today the Upper Town or Cathedral Hill. 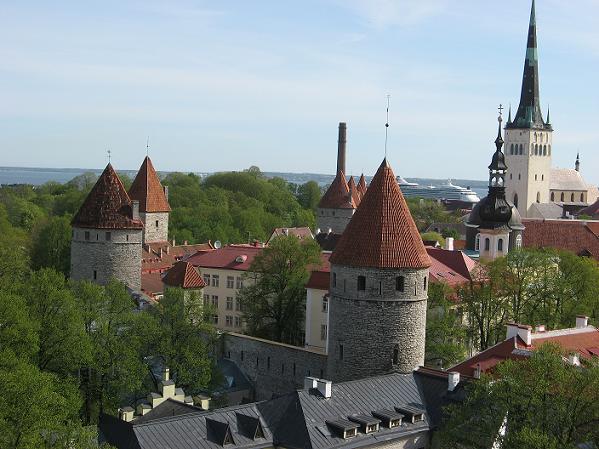 View for the Upper Town (Toompea Hill) to the Lower Town (St. Olav's Church to the right)
There are traces of prehistoric occupation on the hill at the Gulf of Finland, and settlement of the area seems to have been continuous. Since the mid 11th century, a trading town with a timber castle on the hill and a harbour had been erected by the Estonian tribes.

At the end of the 12th century, German, Danish and Swedish interest in the eastern shores of the Baltic Sea increased, and Popes Eugenius III (in 1147), Coelestine III (1193) and Innocent III (1199) gave the wars against the pagan tribes the full indulgences of a crusade. Duke Heinrich the Lion of Saxony and King Valdemar I of Denmark conquered and Christianised the Slavic tribes along the coast of present day Mecklenburg-Vorpommern and Rugia in the 1160ies. A few decennies later, a German bishopric was established in Livonia in 1186.

But conquering was not keeping, so far away from Germany. The moment the crusader army returned home, the local tribes went back to their heathen ways and rebelled. After the bishop of Riga ended up hacked to pieces during such a rising, his successor Albrecht of Buxthoeven created a military order, the Livonian Brothers of the Sword (1202), to protect the German settlements and the trade routes. It was the only military order founded in the north-east, the others all had their origins in the crusades in Palestine, including the Teutonic Knights who would dominate the eastern Baltic states for centuries. 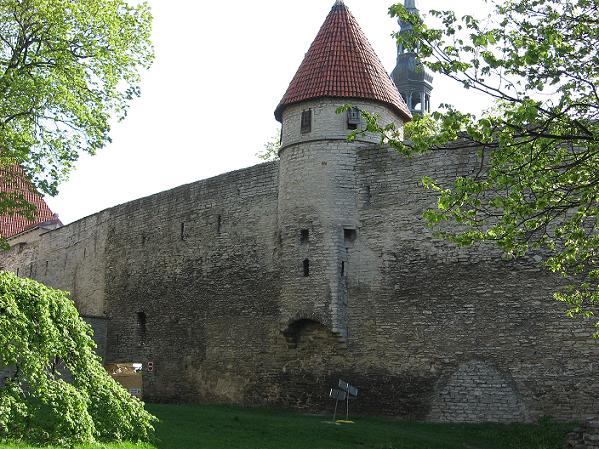 Town walls of Tallinn
By 1208, Latvia (then called Livonia) had been subdued and the crusade moved on to Estonia. The conquest of the six major tribes proved precarious (and the fact that the Republic of Novgorod played cards on both sides didn't help), thus Bishop Albert of Riga asked King Valdemar II of Denmark for help from the sea side. Valdemar defeated the Estonians at the battle of Lyndanisse in 1219, conquering Tallinn and northern Estonia for the Danes. He built a castle and a church on the hill, replacing the former timber structure. 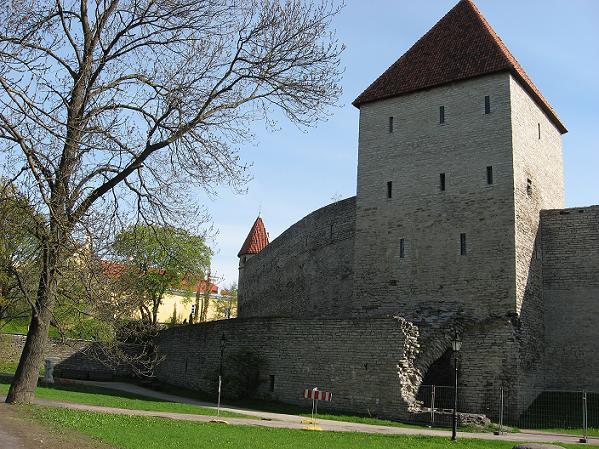 Town walls, seen from the outside
The years to come were a time of conquest, rebellions and shifting alliances in Livonia and Estonia. Tribal leaders like those of the Curonians or Semigallians would ally themselves with the bishop or the Sword Brothers for a time, only to join with some other, still pagan Lithuanian people for the next battle. The Bishop of Riga, who was a landed prince besides, like in Germany, and the Brothers of the Sword who coveted more land as well, became rivals more often than allies, and the king of Denmark was caught in between. 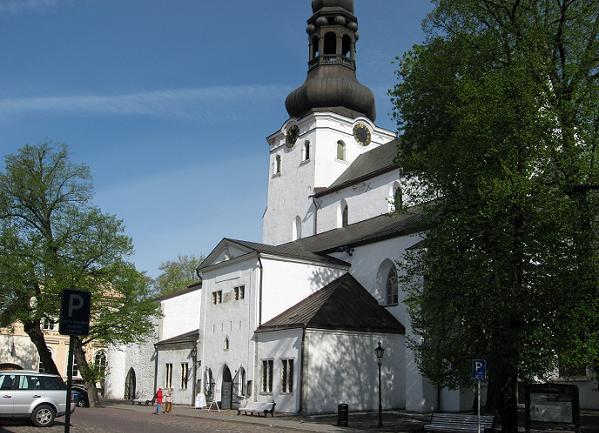 St. Mary's Cathedral in the Upper Town
Denmark could not hold the town and lands against rebellious Estonians and the Sword Brothers both. The latter had the backing of the papal legate and conquered Tallinn in 1227. They received the town and the Danish lands as fief from the pope for a limited time.

The Brothers of the Sword proved to be a troublesome order whose members obviously didn't understand the meaning of the 'obedience' they had sworn. They refused to return those fiefs to the legate three years later. But luck left the knights at the battle of Saulė in 1236, fought between the Order and the Samogitians, a Lithuanian tribe. The Order was thoroughly defeated and lost half of its members including their master - the swampy terrain favoured the light horse of the Samogitians over the heavy cavalry of the knights.

The remains of the Livonian Brothers of the Sword were merged with the Teutonic Knights and became their Livonian branch under a master of their own, but responsible to the grand master. One of the conditions of that transaction was the return of Tallinn and the former Danish lands in Estonia to the pope, who granted them to Denmark, creating the Duchy of Estonia. Tallinn, or Reval, is first mentioned as civitas, as city, in those chartes. 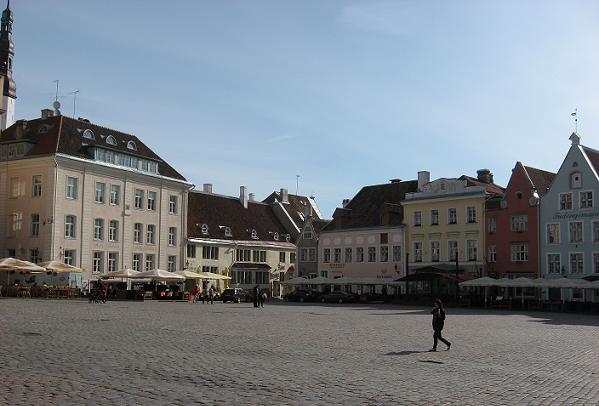 The market square in the Lower Town
During the time the Sword Brothers governed Tallinn, they called in settlers and merchants from Gotland in Sweden and from Germany (mostly from Lower Saxony and Westphalia). They got land and tax exemptions to settle in the town below the castle.

The town consisted of two quarters, the 'German' one and another settlement in the northern part of the Old Town which was mostly inhabited by Russians and some Estonians and Danes. Queen Margarethe of Denmark ordered both parts to be enclosed by a town wall in 1265.

The castle and its outbuildings - including the church - on the Cathedral Hill were not included in the city. That quarter had its own walls and its own law. 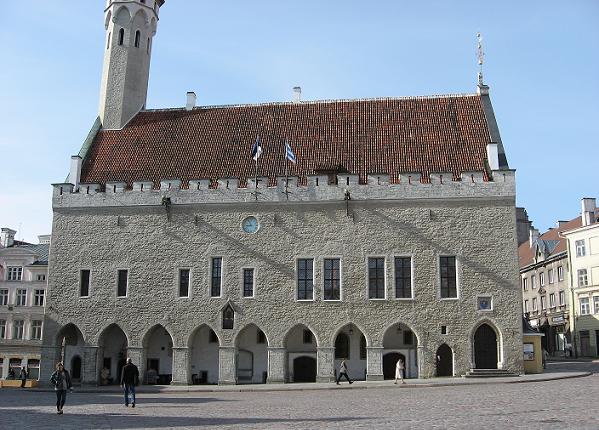 The Mediaeval town hall
The Kings of Denmark had granted Tallinn the town rights of the Lübeck law which would be valid until 1865, and initiated the first city council. The ruling class in town consisted of German merchants which kept close contact to the Hanseatic League. Until 1889, the official language in Tallinn was German.

Denmark also permitted German merchants to take the overland route via Tallinn / Reval and Narva (now at the Russian border) to the trade centre of Novgorod. In the early 14th century, Tallinn became a hub of trade in the Baltic Sea. 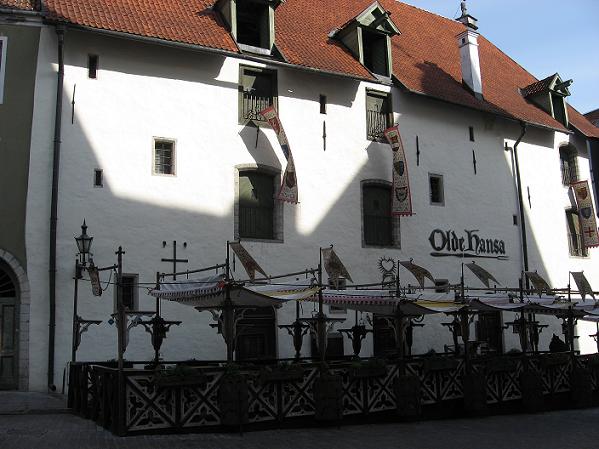 'Olde Hansa', a former storehouse (now a restaurant)
But the Estonians kept causing trouble. After another rising that had to be put down by the Teutonic Knights, and due to the paucity of Danish settlers in the Duchy of Estonia, King Valdemar IV Atterdag decided to accept payment to cede his rights to Tallinn and the duchy in 1346. Valdemar could need the 19,000 marks, since his father had mortgaged a bankrupt kingdom; debts the son paid off successively.

The Teutonic Knights confirmed the privileges the kings of Denmark had givenTallinn / Reval. The Hanseatic League granted Tallinn, together with Riga and Pärnu / Pernau, the staple right which committed all merchants trading with Russia to stop at one of those towns and offer their wares on the market. 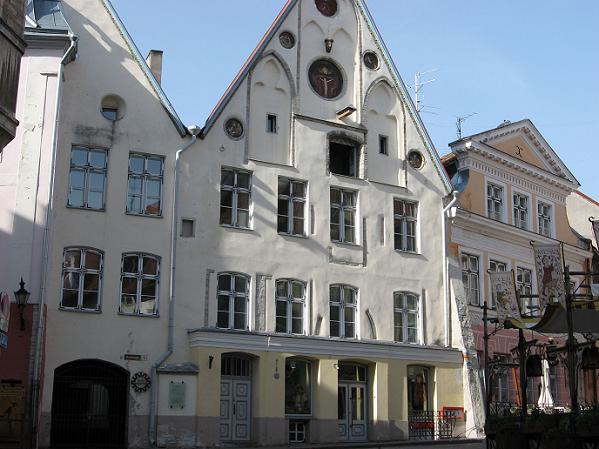 Mediaeval houses
Visby on the Swedish island Gotland, one of the leading Hanseatic Towns for a long time, was often a rival to Tallinn, no matter both were members of the League. But Visby suffered a heavy setback when King Valdemar IV Atterdag (the same who sold Danish Estonia to the Teutonic Knights) plundered the town in 1361. That act led to retribution by the Hanseatic League who, allied with Sweden and Norway, drove Valdemar out of Denmark and into exile. In 1370, he signed the Treaty of Stralsund which confirmed the rights of the League, but allowed him to keep Gotland.

The competition of Visby was further removed when the Teutonic Knights conquered Gotland in 1398, driving out the Victual Brothers, a pirate gang which had made the island their lair and harried the trade routes of the Baltic Sea. (The fleet of the Hanseatic League would finally catch their leaders on Heligoland in the North Sea and put an end to them for good in 1401.)

For several decennies, Tallinn would remain the leading trade town in the eastern Baltic Sea, and an important member of the Hanseatic League. 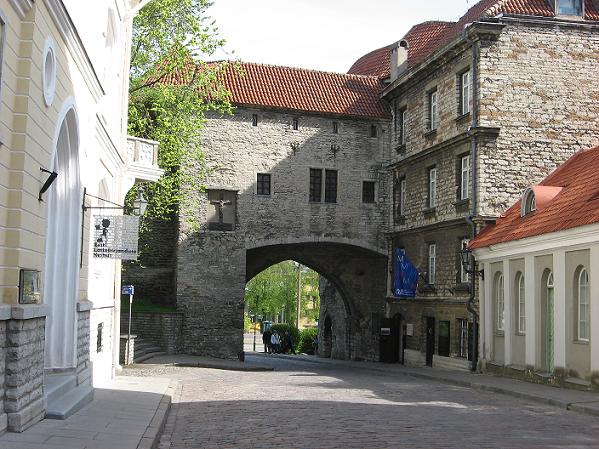 The Coastal Gate
Tallinn's main trade with Novgorod and thus with Russia would suffer setbacks, though. The grand duke of Moscow conquered the Republic of Novgorod in 1478. He then attacked Livonia (by the time the name was often used for both Latvia and Estonia). The town walls of Tallinn proved a safe haven, but the large number of refugees in the town led to an outbreak of the plague in 1481 and again in 1495.

The Teutonic Order put an end to the border wars when they led a successful campaign towards Moscow in 1501 which ended in a peace. The kontor in Novgorod was reopened and trade began to flow again. Tallinn recovered from the loss of inhabitants and saw another period of wealth and importance until 1558. Lutheran Church Order was accepted by the Magistracy of Reval and the Chivalry of Estonia in 1525. 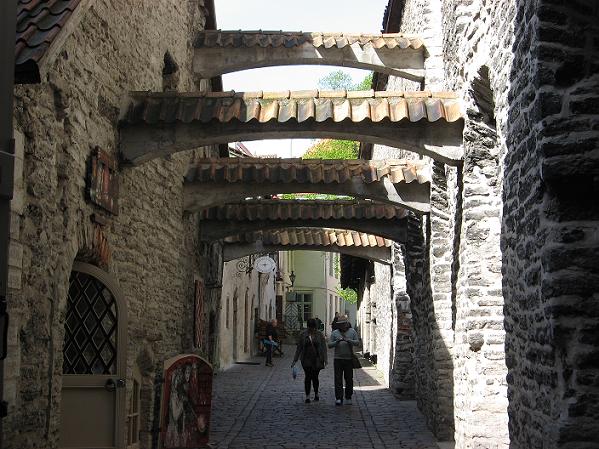 St.Catherine's Passage, Lower Town
The rule of the Teutonic Knights in Livonia came to an end after the the Livonian branch of the Order was defeated by the grand duke of Moscow in 1561 (the Order had already been ousted of Prussia in 1525).

Tallinn asked Sweden for protection. Thus the Swedish rule of Tallinn began, which would last until the Great Northern War in 1710. The special rights of the German citizens were reduced.

The Hanseatic League was on the decline as well, though it would take another century until the last official meeting, the Hansetag, in 1669. 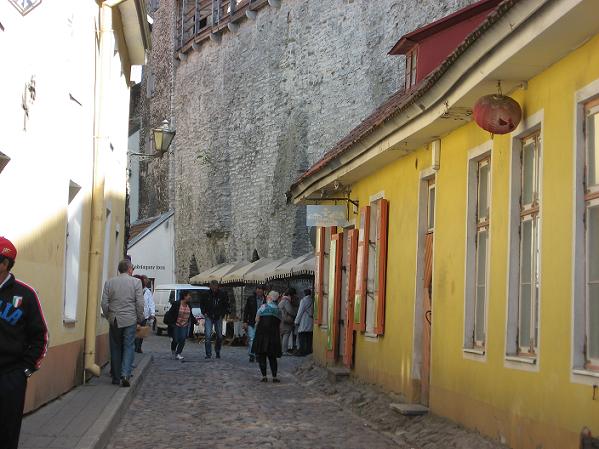 Lane at the town wall
In 1700, the Great Northern War began, a war that would last until 1721 and involved the Scandinavian countries, the Polish-Lithuanian Commonwealth and Livonia, Prussia, the Russian Empire, Great Britain, and even the Ottoman Empire. Tallinn, together with Swedish Estonia and Livonia, came to Imperial Russia in 1710 at the Treaty of Nystad between the Tsardom of Russia and the Swedish Empire. It retained the autonomy of the local institutions as Governorate of Estonia. 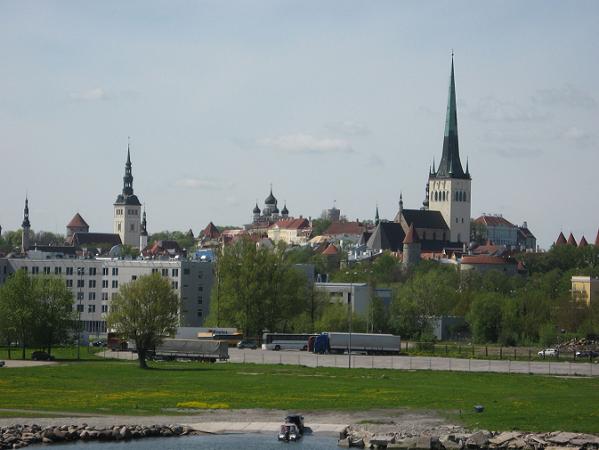