16 Feb 2020
A Former Wood Pasture Turned Jungle - Old Forest near the Sababurg
After the visit to the Hutewald in the Solling which is an example for a recreated and working wood pasture, let’s have a look at a former wood pasture that has been allowed to grow on its own without the influence of humans or domesticated animals for a long time now. 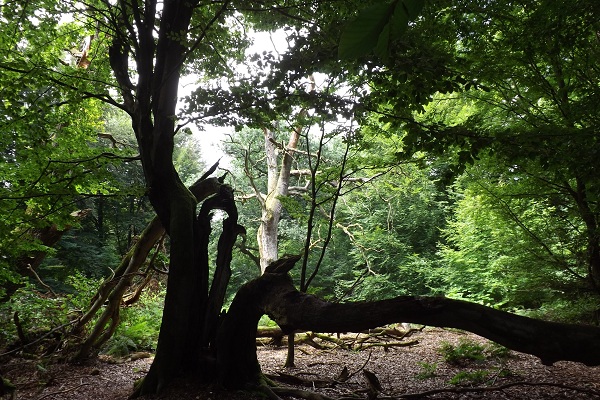 The Urwald Sababurg is a part of the Reinhardswald Forest (near Kassel) close to Sababurg Castle. The denomination as ‘jungle’, while popular, is misleading. It is no true primeval forest, but has been influenced by humans since the Middle Ages. But the enclave near the castle has been turned into a Nature Reserve and left to its own since 1907, so the forest had a lot of time to develop naturally. 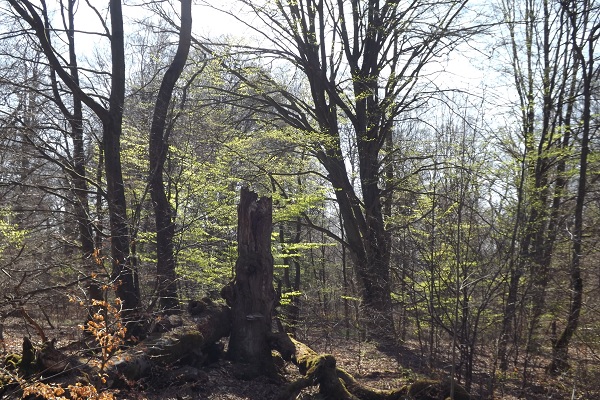 The forest in spring
I have been hiking there several times, so the photos in this text present the forest in early spring and high summer; two very different vistas. Spring is the best time to see the boles, branches and twigs of the old trees. Summer is green and shady. 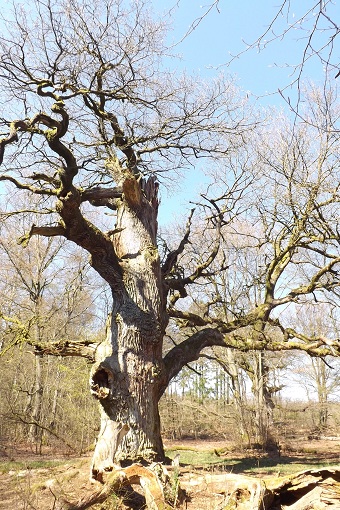 Gnarled old oak
The forest encompasses 92 hectares of former wood pasture. Due to its history, old oaks are one of the forest’s defining features. Some of them are 800 to 1000 years old, as are a number of beeches, often growing out of their roots with several boles due to former coppicing. Another typical feature are the high ferns that abound in the clearings. Clearing with bracken fern
What makes the Urwald Sababurg a jungle is the fact that the wider space between the trees in a former wood pasture allowed for younger trees and shrubs to grow up during the last hundred years. Fallen logs and boles are left to rot, so outside the hiking paths, a pretty dense boskage has developed over time. 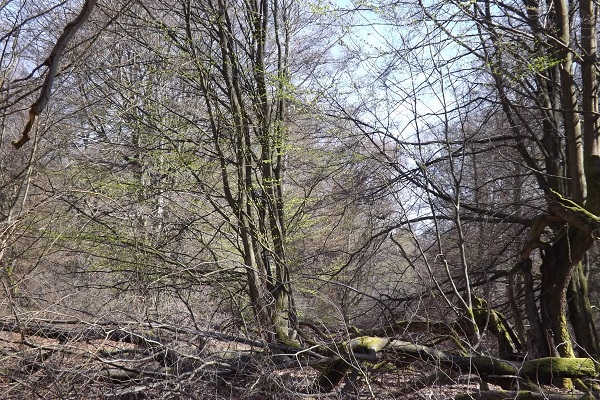 Why it’s called ‘jungle’
Oak and beech are not the only trees in the Sababurg Forest. Birches took their chance to grow up between the larger oaks. They are fast growing and shot up to a good size by now. Their silver-grey bark and the lovely pale green budding leaves are an epitomy of spring. 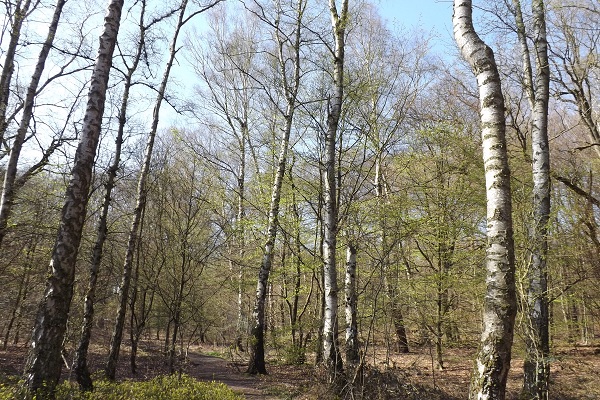 Birches in spring
The forest is unique in Central Europe, due to its past as wood pasture with those ancient oaks and beeches, and its biodiversity that developed together with the forest left to its own for a century by now.


Spring and summer
The oldest trees are individuals; most even got nicknames by the rangers working in the forest. While gnarled old oaks can be found in other places as well, if they meet with good conditions, a thousand year old beeches are very rare. Usually, beech populations in a forest have a shorter generation shift. 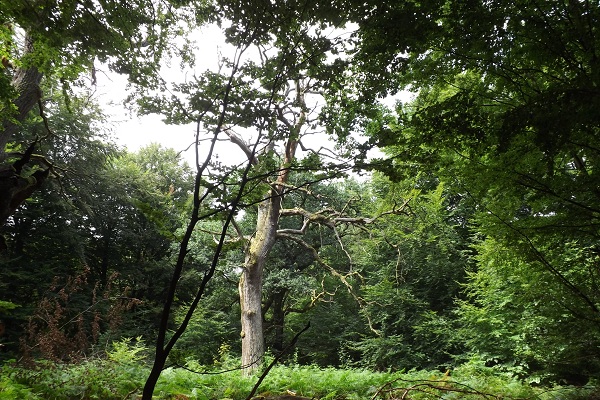 The forest in summer
The farmers’ rights to forest pasture and pannage had already been repealed in 1865, but it would take until the beginning of the 20th century for the forest to become a Nature Reserve. Some painters took an interest in the picturesque quality of those old trees and the burgeoning wilderness. Their paintings led to a growing interest in such forests, especially since the mythological quality of those mysterious places met with the spirit of the time. 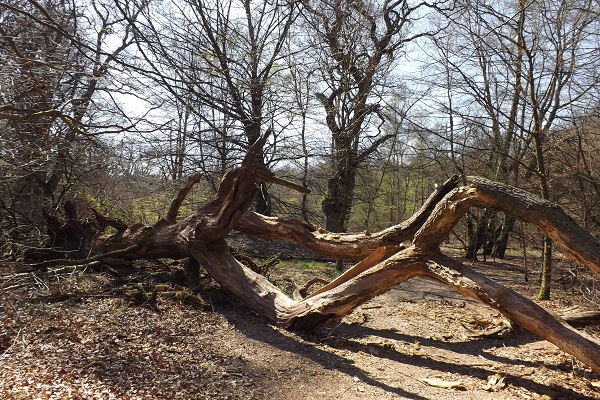 A fallen tree
The first forest, protected since 1907, encompassed 61 hectares. In 1917, it was expanded to 181 hectares, but part of that were not ancient wood pasture, so the size was decreased again to 92 hectares which is also the present expanse of the forest. The ground and the forest belong the the County of Hessia. 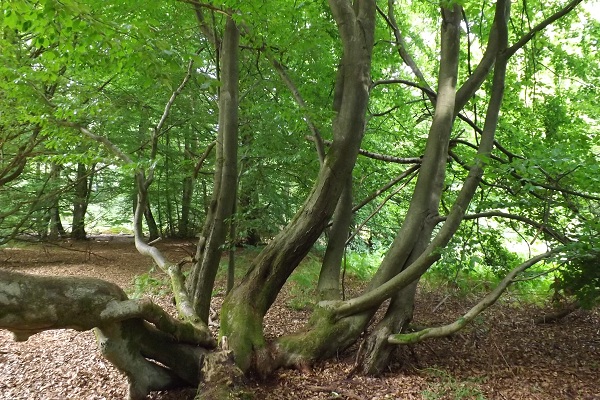 Beeches finding their way to the sun
Many of the 800 year old beeches and oaks have reached their maximum age and are slowly dying. In the sunlit spots such giants leave behind, secondary forest grows, mostly birches, hornbeams and rowans. Alder trees have taken root in a wetter part of the forest. One of the oldest oaks, the Rapp-Eiche
The natural development of a forest would have offered the best chance to common beeches. They are social trees that communicate and exchange nutrients via their root system (other tree species do that as well, but beeches are especially good at it). When a forest influenced by humans was abandoned again, they usually got the best start. Therefore Germany is rich in beech dominated deciduous and mixed coniferous forests. Beeches also thrive on low nutrient brown earth like in the Reinhardswald. 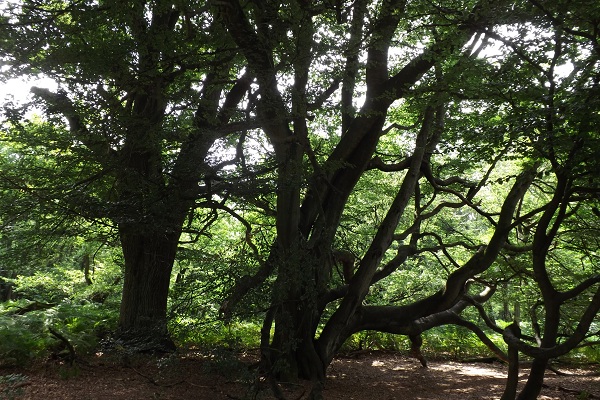 A labyrinth of branches and twigs
The unusual high distribution of oak trees in the Sababurg Forest is due to the human influence at the time when those forests were used for silvopasture, since oaks would offer the best shade to the animals and the acorns as fodder. So the limited human interference that is allowed in the Sababurg Forest has been to protect some of those old oaks from the competition of beech saplings since 1975. 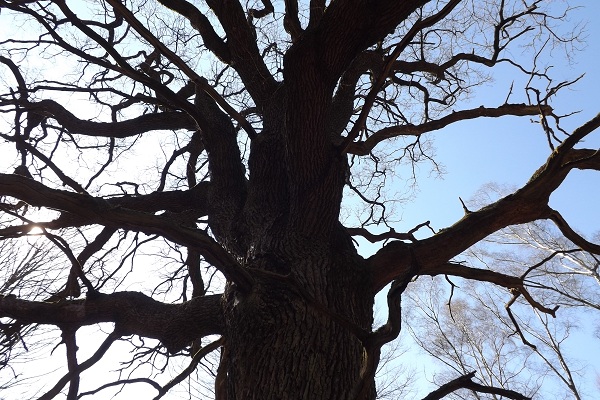 Closeup of an oak
Ground covering vegetation is mostly whortleberry, wood hairgrass and purple reedgrass, as well as haircap moss (which likes the rotting, fallen trees) and bracken fern that grows up to two metres and abounds in the clearings. 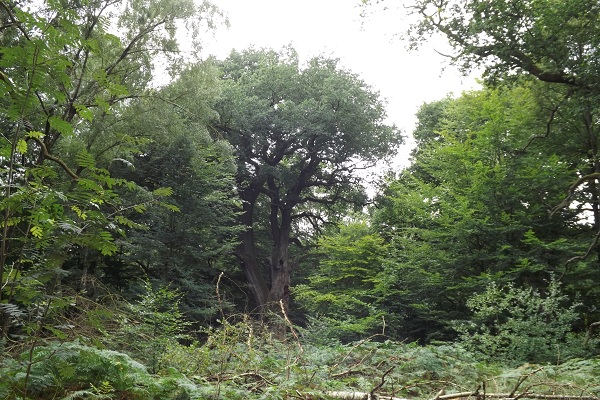 One of the clearings
The high amount of dead wood is one of the distinguishing features of a forest left to itself (it would be transported off in a cultivated forest), and an oeceologically important factor. It provides growing space for funghi, moss and lichen. 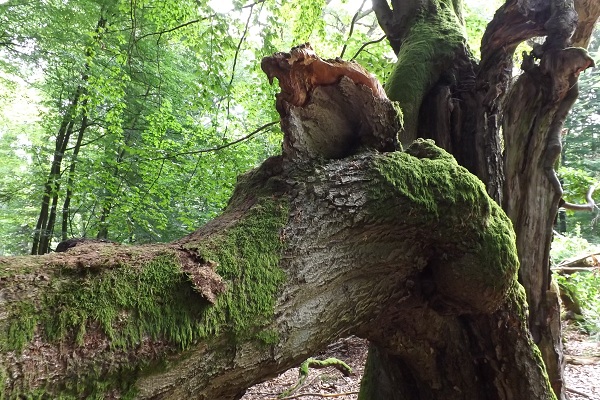 Broken-off branch
The rotting wood and the chapped bark of the old trees offer a biotope for 2,000 insect and beetle species, a fifth of which are endangered, among them the stag beetle (which can also been found in the Hutewald in the Solling). 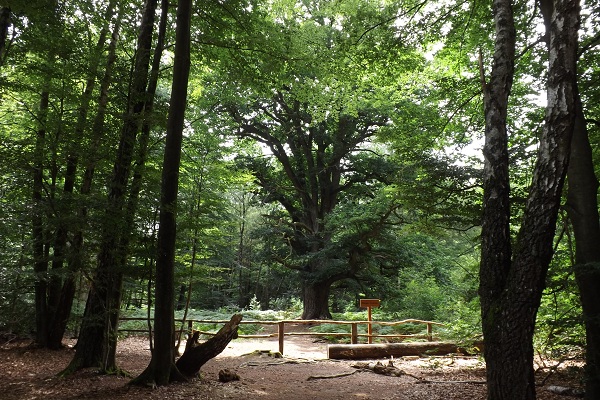 The forest in summer
And the forest is a lovely place for hiking - in every season.
¶ February 16, 2020