21 Jul 2019
Pretty Porvoo - A Mediaeval Town in Finland
I'm not only collecting new travel destinations and lots of photos, I still have an archive full of material from former tours. So here's one of the places I've visited during my Baltic Sea Cruise in 2012: Porvoo in Finland.

The old town with its 550 buildings is a treasure of old timbered houses in bright colours, and cobblestone lanes, plus a fine stone and brick church. Come and walk along with me a bit. 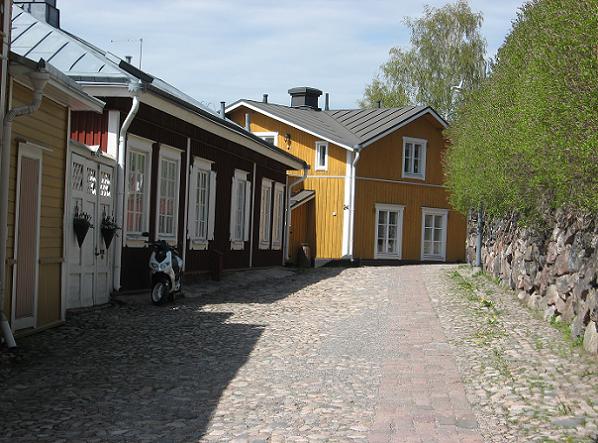 Cute timber houses
Porvoo (also known by its Swedish name Borgå) lies some 50 kilometres east of Helsinki. The layout of the old town dates to the Middle Ages, but Porvoo suffered from several severe fires, most of them due to wars, so most ot the houses date to the 1760ies. But the inhabitants stubbornly erected them on the same sites and pretty much to the same design several times over.

Porvoo was lucky to escape a Town Makeover, since the magistrate - after popular resistance to the new urban plans in the 19th century - decided to set up a new town on the other side of the river instead of destroying the old houses and replacing them with higher buildings to create more accomodation space. 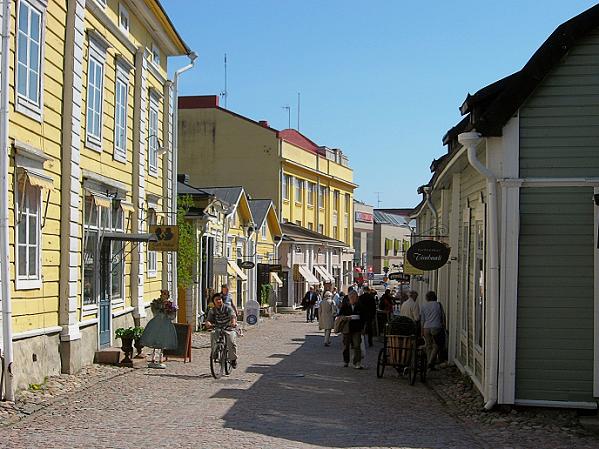 Another lane with timber houses
Porvoo is connected to Gulf of Finland and the Baltic Sea by the river Porvoonjoki which had been a trade route already for the Iron Age tribe of the Tavastians, who still were around in the Middle Ages. Since they remained pagan, the Catholic Church and Birger Jarl, the regent of Sweden, lauchned a crusade and defeated them in 1250ies. Afterwards, the area was colonised by German and Swedish craftsmen and merchants; their main settlement was called Saksala. 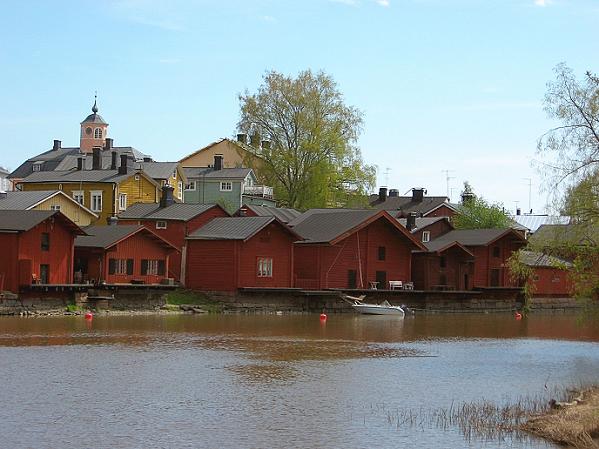 Old warehouses at the harbour
The settlement got the rights of a town in 1346 by the Swedish king Magnus IV Eriksson, making Porvoo the second oldest town in Finland.

Other sources have 1380, but it makes sense to agree with the date of King Magnus' reign, since it would fit with the peace of Nöteborg (1339), where Magnus and the Grand Prince of Moscow divided their spheres of influence in Finland. Magnus may have been interested in enhancing the importance of the harbour and market place Saksala / Porvoo that way. The red paint not only makes the houses look more pretty, it also prevents the timber from damage by water and sun. Today, most of the buildings host shops and restaurants. More houses that follow the old pattern have been added. 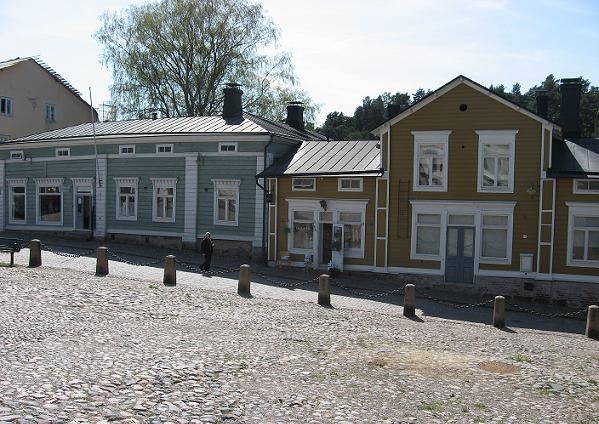 Houses at the market square
King Gustav Vasa of Sweden started his own town project with the foundation of Helsinki (Helsingfors) in 1550. To get rid of the competition, he ordered the citizens of Porvoo to move to the new town. He also introduced the Lutheran Church in Sweden.

The decline of Porvoo lasted only a short time. Gustav Vasa's successor Johan III reestablished the town privileges of Porvoo in 1579 (1). A little historical connection for you: Johan was married to Katarzyna (Catherine) Jagiełłonica of the Polish-Lithuanian ruling family; their son Sigismund would eventually inherit both thrones, until he was deposed from the Swedish throne by his uncle Karl XI in 1604. 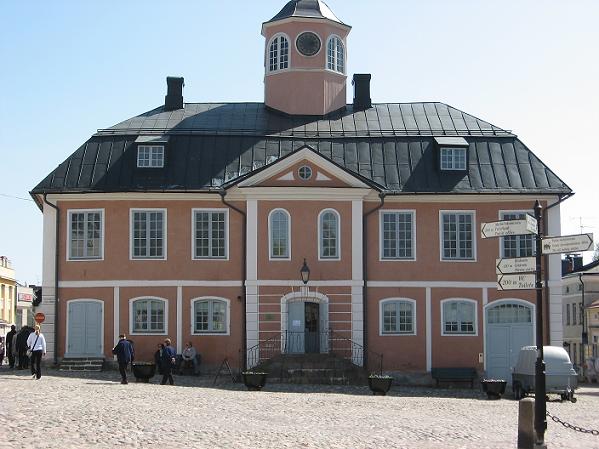 The town hall
Finland remained a zone of contest of influence between Sweden and Russia. Porvoo was more than once involved in the frequent Russo-Swedish wars (2). During the war at the end of the 16th century, the town was twice burned by the Russian army.

Porvoo was again destroyed in 1708 during the Great Northern War. But even without war, Porvoo met with destruction during the great fire of 1760. The town was rebuilt on its Mediaeval foundations once again. 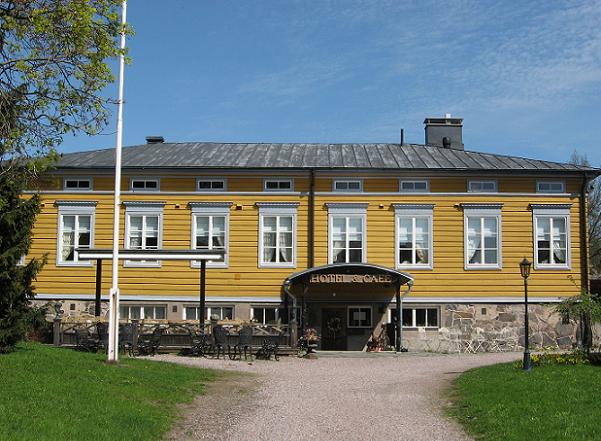 Another lovely house
Finland was finally conquered by Russia in the early 19th century, and annexed to Russia as an autonomous grand duchy with its own constitution. And it was in Porvoo, not Helsinki, where the defining diet was held in 1809. Tsar Alexander I visited the town and confirmed the new Finnish constitution - which was basically the Swedish one from 1772. 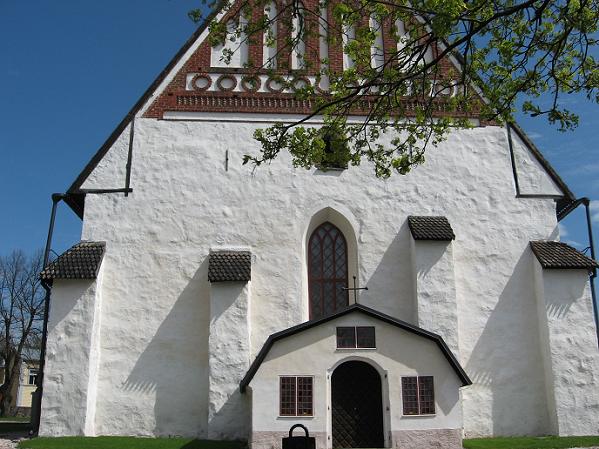 The cathedral of Porvoo
One of the central meeting places of the diet was the cathedral of Porvoo. It stands on top of the hill around which the town clutters. Its oldest parts date to 1410, replacing an elder timber construction. The building was expanded in the mid -15th century.

The church was victim of war and fire more than once, much like the town, which may explain the mix of stone and bricks that have been used for its construction. Last time a fire broke out was in 2006; the timber roof was destroyed, though the stone and brick parts survived mostly intact. 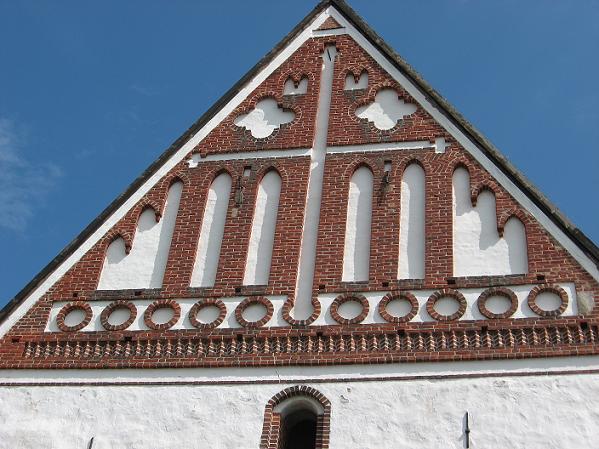 Detail of the gable decorations
The church may have been built by the anonymous German 'Pernjanan mestari' who also constructed several other churches in Finland following the same pattern. The outstanding feature of the church in Porvoo is its separate belfry (those are commonly found in Flanders, but not in Germany and Scandinavia).

Interestingly, the cathedral is still dedicated to Mary, something you would more likely expect for a Catholic church. 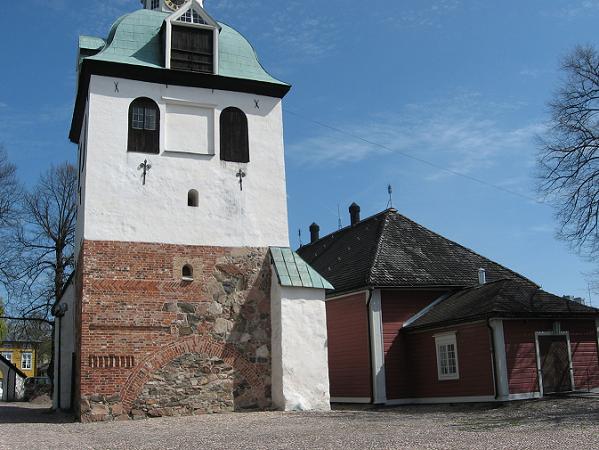 The belfry
The charming little church was elevated to cathedral when the Protestant episcopal see was moved from Vyborg (Swedish: Viborg) to Porvoo in 1721. At that time, Porvoo was the second largest city in Finland.

Vyborg had been in Swedish hands, but was conquered by Tsar Peter the Great during the Great Northern War in 1710. Today, the town belongs to the Leningrad Oblast in Russia, after it had been recaptured from Finland during WW2. 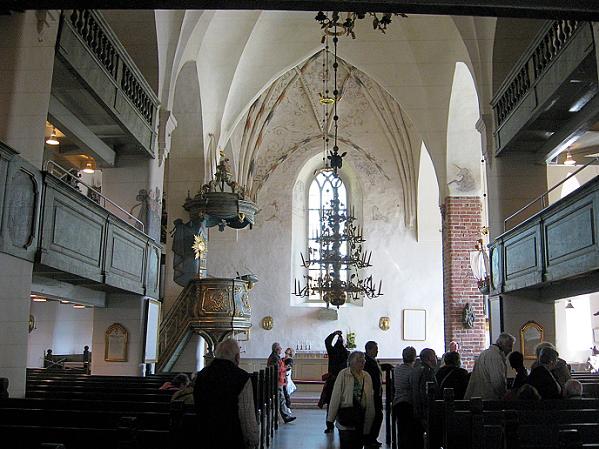 Cathedral, interior
Porvoo / Borgå is the episcopal see of the Swedish speaking communities in Finland as well as the German-Lutherian parish in Helsinki since 1923. In 1992, the Porvoo Common Statement was issued and celebrated in the cathedral. It is an inter-church agreement of a non-institutional community of four Anglican and eight Nordic and Baltic-Lutheran churches to work together. 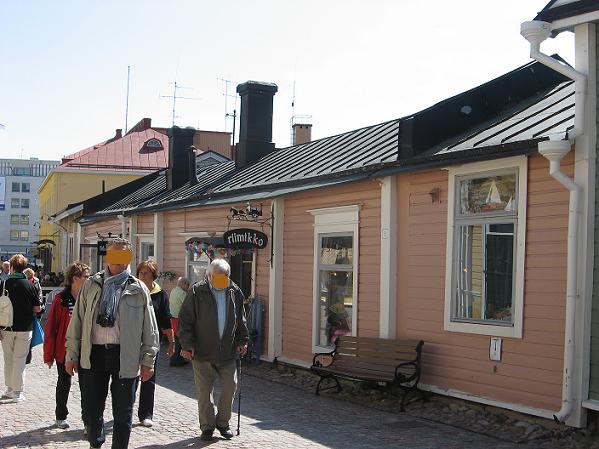 Lane with small houses and tourists
Footnotes
1) Johann was a son of Gustav Vasa by his second wife and succeeded his half-brother Erik XIV in 1568, after the latter had been deposed due to madness.
2) A list of the wars can be found on Wikipedia.