10 Jun 2018
Gibraltar of the North - A Virtual Tour through Luxembourg City
The historical centre of Luxemburg lies on a rocky plateau that is surrounded on three sides by the rivers Alzette and Pétrusse which have carved out a forty metres deep valley. A settlement at the Alzette, known as Grund, dates to the 11th century. Today, the town has spread along the rivers and to the hills on the other side of the valley, which in turn is spanned by a number of bridges. That particular situation, together with the fortifications that have been built on and into the rocks during several centuries, earned Luxembourg the nickname 'Gibraltar of the North'. The town is part of the UNESCO Cultural Heritage since 1994. 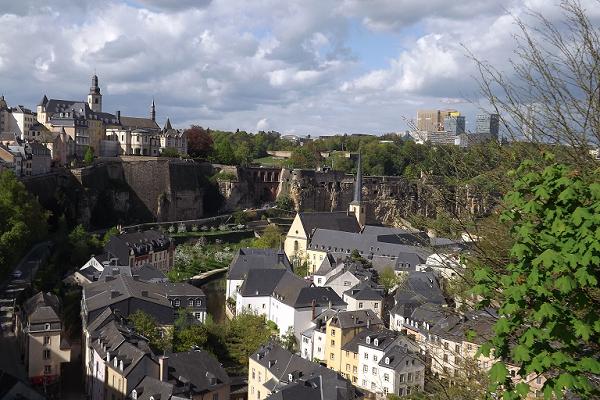 Luxembourg - a city on different levels

Sightseeing in Luxembourg City means a lot of walking uphill and downhill, either on stairs or steep lanes. There are also two elevators which lead from the valley quarters Grund and Pfaffenthal to the Upper City. The payoff are an abundance of great vistas, esp. when the weather is playing nice - sunny with some interesting cloud formations - like I did when I visited the town. 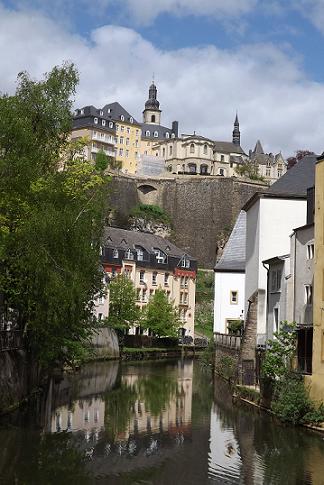 View from Grund and the Alzette to the Haute Ville
During Roman times, two roads crossed on the plateau; they were protected by a watch tower and a fortelet. The rise of Mediaeval Luxembourg began with Count Siegfried of the Ardennes (whose grandmother Oda of Saxony was a cousin of Otto the Great). He acquired the lands in an exchange treaty with the the abbey of St.Maximin in Trier in 963 and built the first castle, named Lucilinburhuc, the 'little castle'. 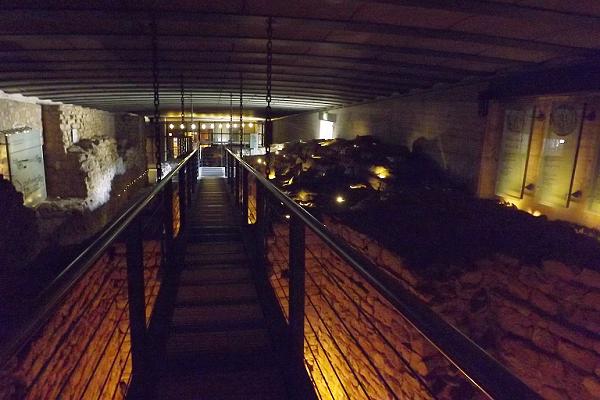 The foundations of the first castle
During the following centuries the city expanded westward to the area where the Cathedral of Our Lady and the Grand Ducal Palace are now situated. Duke John the Blind, of Crécy fame (he fought in that battle despite his blindness, and was killed), built a wall around the upper city in 1340, which would remain until the 19th century. It was the time when the dukes of Luxembourg were also Kings of Bohemia and Holy Roman emperors - quite a rise since Count Siegfried first set his foot on that promontory. 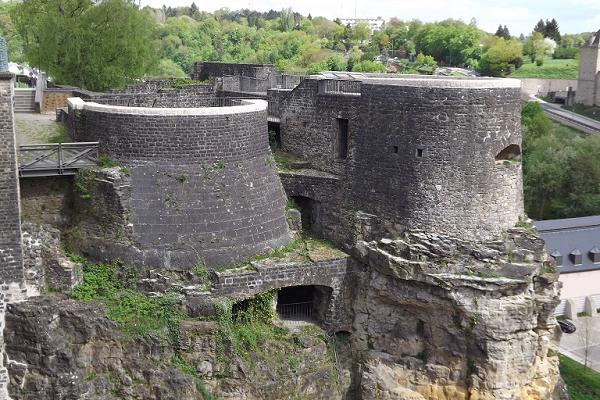 The Bock Fortifications
The duchy and town of Luxembourg were often involved in wars due to its strategically importance, and conquered by several other countries: Burgundy, Spain, France, Austria and Prussia. They all left their additions to the fortifications over the centuries - some of those were made by general Vauban whom I mentioned in my post about Strasbourg, during the time of King Louis XIV. (A more detailed post about the history of Luxembourg will follow; I have plenty of photos left.) 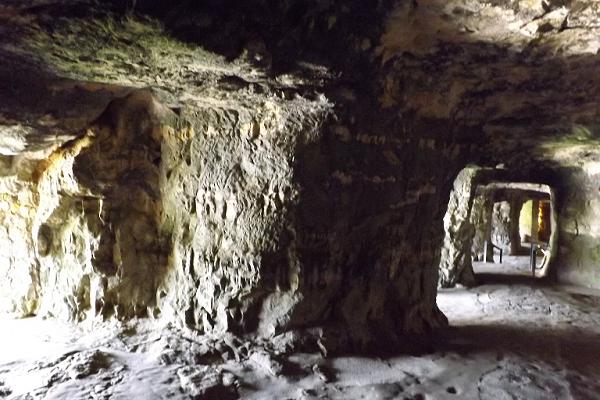 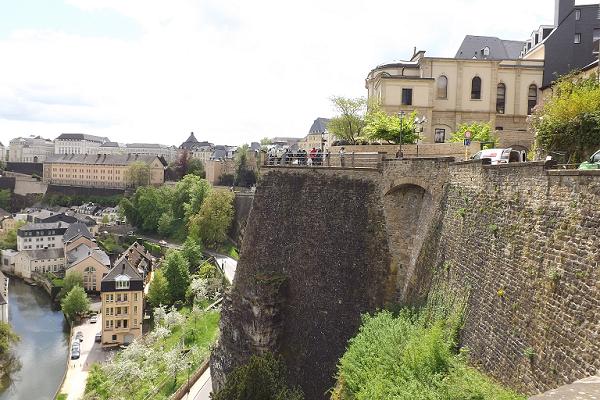 View from 'the Bock' to Grund and the Corniche (right)
The 'Bock Rock' offers some really pretty views to the districts of Grund and Pfaffenthal. The photo above shows the loveliest of the lower quarters, Grund, and - to the right - the Corniche, the balcony-like structure built above a fortification wall that expanded the natural rock defenses. It is called Europe's longest balcony - a popular place with tourists and Luxemburgians alike. 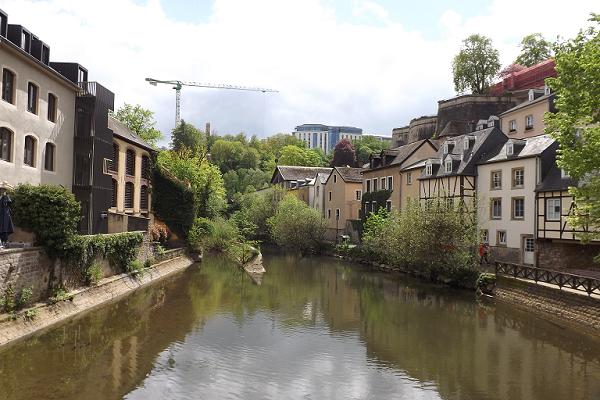 Pretty houses at the Alzette
The settlement of Grund dates to the 11th century. It was the quarter for craftsmen and manufacturers. Today the situation along the river makes for pretty vistas, but the flooding of the Alzette has long been a problem. The main church in Grund was dedicated to St.Peter who obviously protects from floods (not always successfully, though modern flood management has improved the situation). 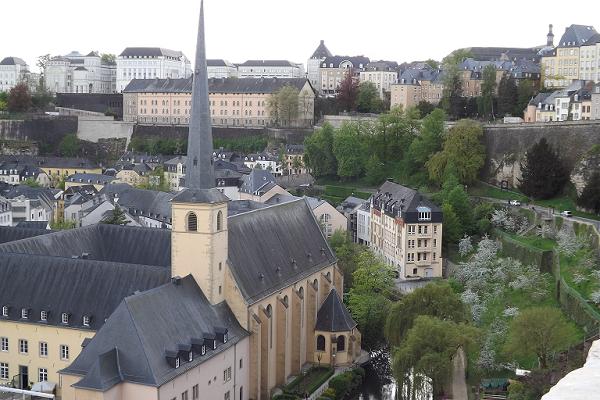 Neumünster Abbey, seen from the upper town
The best way to see the entire abbey is from above. The orignal 11th century abbey had been destroyed by the French in the 15th century, but was re-established by Benedictine monks in 1600. It was rebuilt again in the 1680ies after another French attack. After the secularisation, the buildings have been used for various purposes, so as hospital and prison. Today the buildings are used for exhibitions and other cultural purposes. 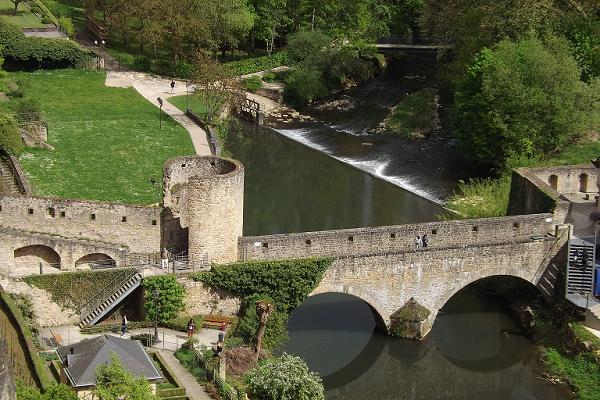 The old bridge across the Alzette
The bridge over the Alzette with the remains of watch towers and walls with arrow slits is part of the town fortifications that were begun by John the Blind (see above) and continued by his grandson Wenceslaus IV 'the Lazy' of Bohemia, King of Germany. Wenceslaus was dethroned in 1400 by the four Rhenish electors (the archbishops of Mainz, Cologne and Trier, and the Count of the Palatinate) because he proved to be useless as king. Well, at least he gave his name to that part of the town fortifications which are called Wenzelsmauer. (Wenceslaus' Wall). 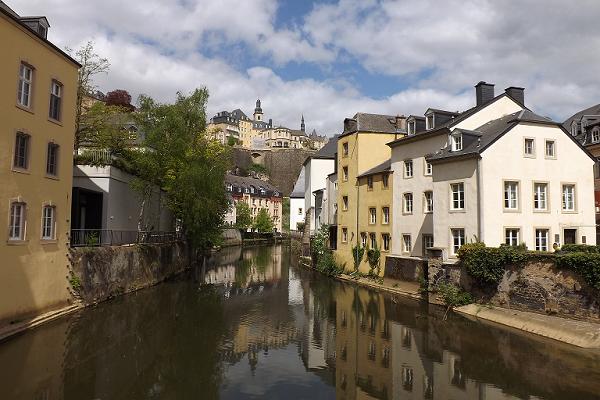 Houses at the Alzette, with the Upper Town in the background
We're leaving Grund (this time by elevator) to take a closer look at the Haute Ville, the Upper Town. Its historical and present centre is the Grand Ducal Palace. The palace is a combination of the old town hall from 1572, built in the style of the Renaissance - interestingly without the usual steeped gable - and the weighing house of the town, dating to 1741. There had not been a ducal palace until 1890, because at first the rulers still lived in the castle and then mostly resided in Prague as Kings of Bohemia. When the House Luxembourg died out in the male line in 1437, town and land were ruled by governors of its various conquerors. 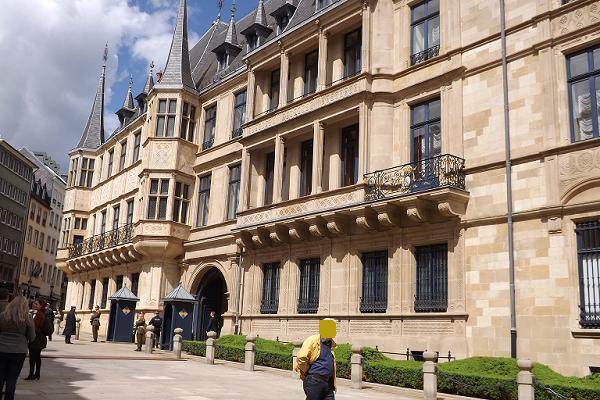 The Grand Ducal Palace
The grand ducal family lives in the castle when they are in town; they also have their offices there, as do some members of the main administration. There are also guest rooms and great halls for official events. The grand duke must have been in residence while I was there, because two guards were parading in front of the palace, instead of one. 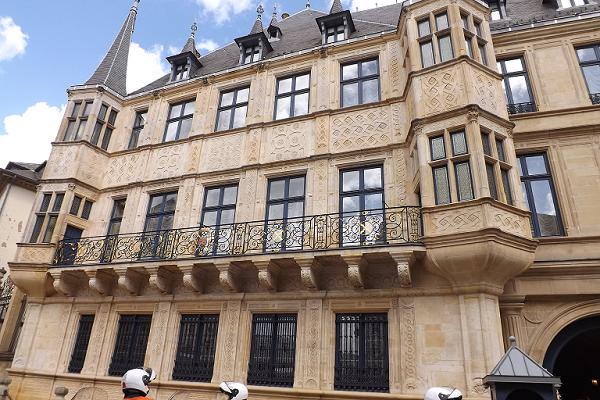 Grand Ducal Palace, detail
When King William III (House Orange-Nassau), King of the Netherlands and Grand Duke of Luxembourg, died in 1890, his daugher Wilhelmina succeeded him as Queen of the Netherlands, but in Luxembourg, female heritage was only possible when there was no male heir; so the duchy passed to the cadet branch, to Adolphe of Nassau-Weilburg. His son had only daughters, so Charlotte became Grand Duchess. She married Felix of the House Bourbon-Parma and had - among other children - a son, Jean, His son Henri is the present Grand Duke of Luxembourg, of House Nassau-Weilburg in the cognatic, and of House Bourbon-Parma in the agnatic line. 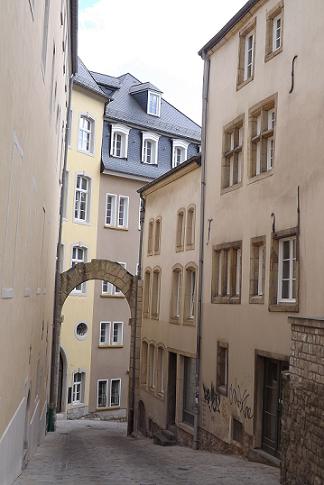 A narrow lane in the upper town
The quarter around the palace and the Fishmarket is the oldest, and the fish market was the first market in town. Already the Roman roads crossed here. The place is just a few steps from the first castle, now the site of the Bock Fortifications. The building space on the plateau is limited, as the narrow lanes demonstrate. 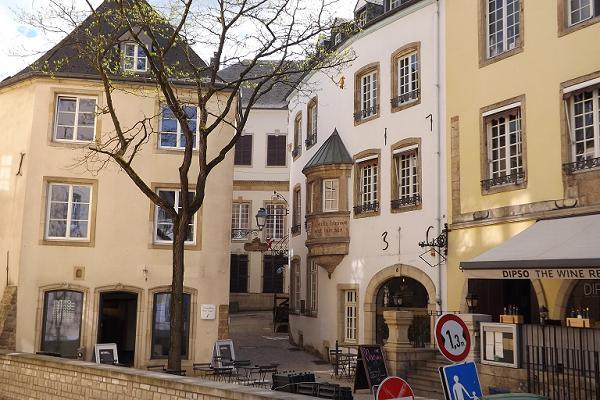 A pretty corner at the Fishmarket
All those wars resulted in a lot of damage; few houses date as far back as the Renaissance; a lot are Neoclassical. The main place, Place Guillaume or Knuedler in Luxembourgish, is a grand sight. Unfortunately, there was the annual Octav Celebration in honour of the Holy Virgin going on, and a lot of carousels and booths had been put up on the place - not good for photographing. 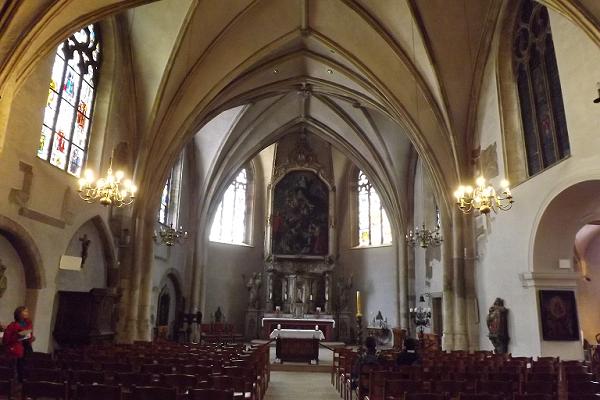 St.Michael's Church, interior
St.Michael is the oldest church in Luxembourg City, situated close to the castle. The first building dates to the 10th century, but various damages led to rebuilding and repairs in a more 'modern' style, therefore the present church, dating mostly to the 16th century, is a mix of Romanesque, Gothic and Baroque elements. 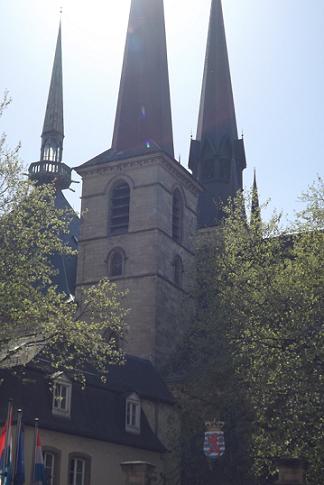 The cathedral Notre Dame
The cathedral dates to the late Gothic (1621), with an additional choir in the Neogothic style which was added between the World Wars. The towers date to that time as well.

When Luxembourg was declared a neutral state in 1867, part of the fortifications had to be razed (actually, it should have been all of it, but that proved impossible) and oddly, the church towers as well. Therefore, the town lacked a landmark for many years. The towers of the cathedral are today the 'crown of the old town'. Unfortunately, I could not get inside the church due to the Octav celebrations. 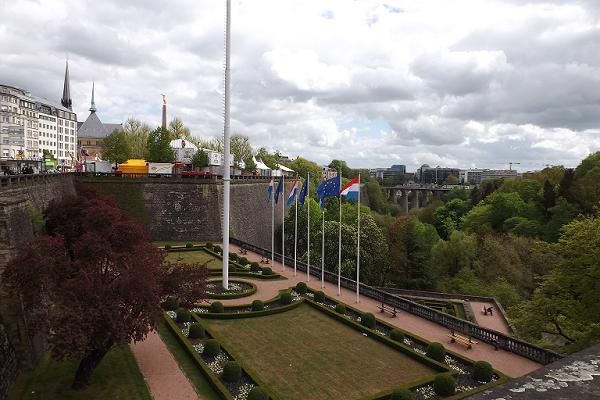 View to the Beck Fortifications and the Pétrusse Valley
We go back to the still impressive fortifications. The Beck Fortifications date to the Spanish occupation around 1644. To the left you can see the Place de la Constitution with the Gëlle Fra (the Golden Lady; left) on the huge pillar, and more booths due to the Octav. To the right you can glimpse the Passerelle, the viaduct bridge across the Pétrusse valley connecting the upper town with the station quarter; it dates to 1860.

The Golden Lady was erected after WW1 in commemorial of the fallen. It had been hidden during WW2 and and is now a monument for peace. 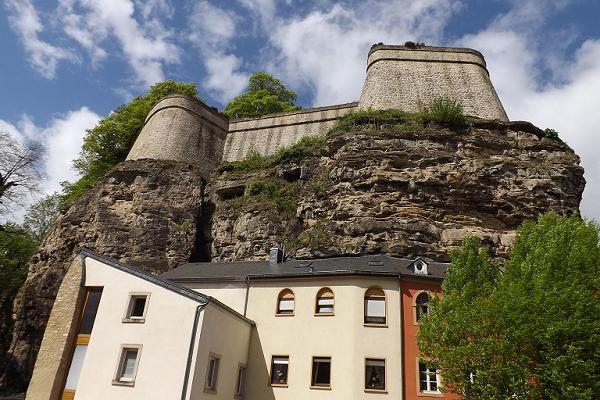 Holy Spirit Citadel
The Holy Spirit Citadel is situated near the confluence of the Pétrusse into the Alzette, at the entrance to Grund. It is part of Vauban's work (see above). There had been a nunnery on the site since 1234, then still outside the fortifications. It was later included in the walls John the Blind built. I could not figure out when the nunnery was abandoned - likely at the time the bastions were added - but I found out that the remains of the building were dismantled in the 18th century. They obviously had been used as barracks during Vauban's time. 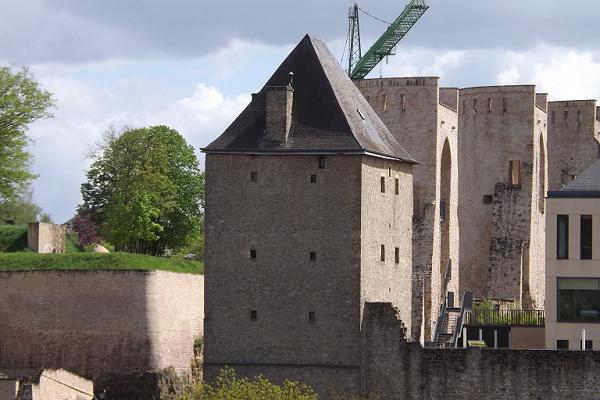 Towers on the Rham Plateau
The Rham-Plateau opposite the 'Bock Rock' had been included in the city walls during the time of King Wenceslaus in the early 15th century (who may have been a lazy king, but not so bad at commissioning walls). The impressive half-towers date to the time of Vauban who built defenses and barracks there in 1684. The towers had been razed, but were recently restored. 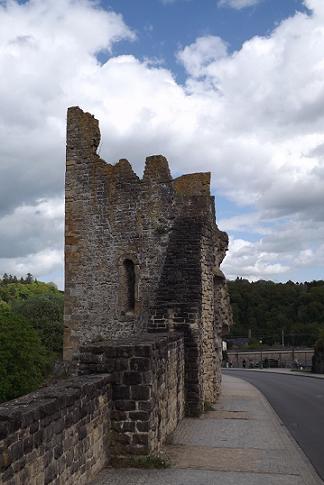 The 'Hollow Dent' Tower
The 'Hollow Dent' is a fortification tower that has been only partly razed, giving it the impression of a Mediaeval ruin. The Luxemburgian middle finger to the razing order. ;-) 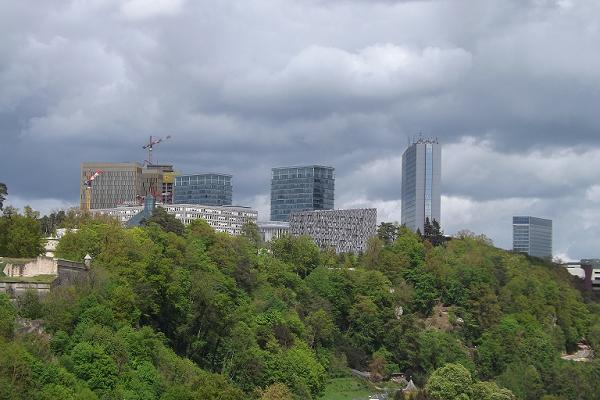 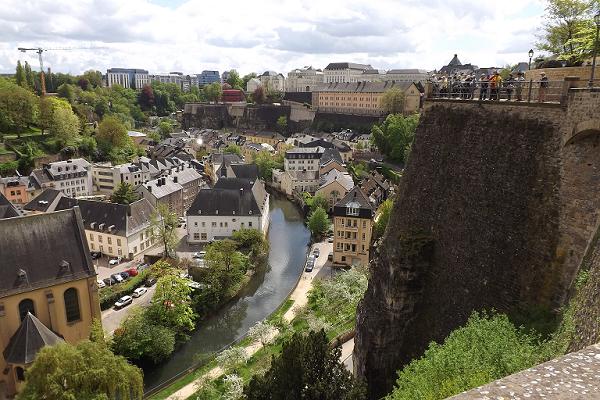 View towards Grund
I'll leave you with a final view over Luxembourg City from a different angle. I hope you liked the little tour.   ¶ June 10, 2018