20 Jun 2021
Summer Colours - Archaeological Remains in the Forest near Bad Sooden-Allendorf
I mentioned the Mediaeval ringwall and the Bronze Age burial mounds in my post about the Bruchteiche. Those sites are hidden in the forest which makes for another pretty Summer-in-Germany post with a bit of cool shade during the hot days we just got. 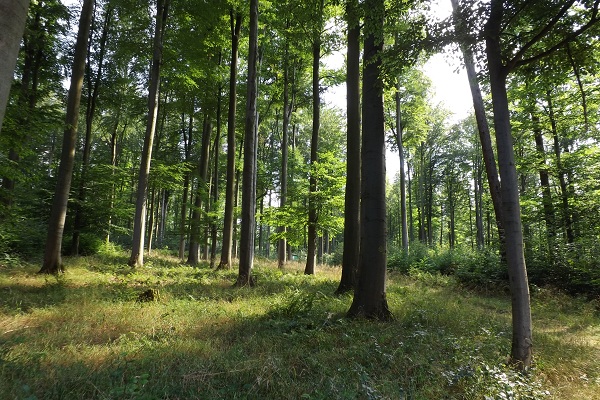 There is a substantial number of fortifications in Germany dating to the Iron Age or the early Mediaeval period. Most of them are scarcely visible today, often located on forested hills or promontories where they look like natural structures at first view. They are known as ringwall forts or walled castles, like so so-called Römerlager ('Roman Camp', though it has nothign to so with the Romans) near Bad Sooden-Allendorf. 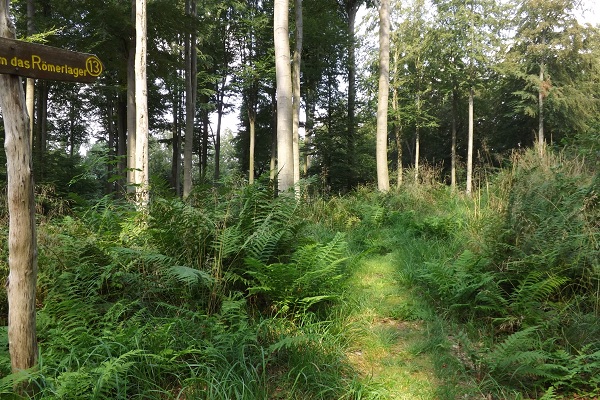 Those ringwalls can enclose areas of varying size from less than a hundred metres in diameter those some that surround a site of several hectares. The walls were usually earthen walls, sometimes mixed with stones – depending on the material avaliable. A dry ditch in front of the wall was common, as well as gate structures; some of those are still visible today. 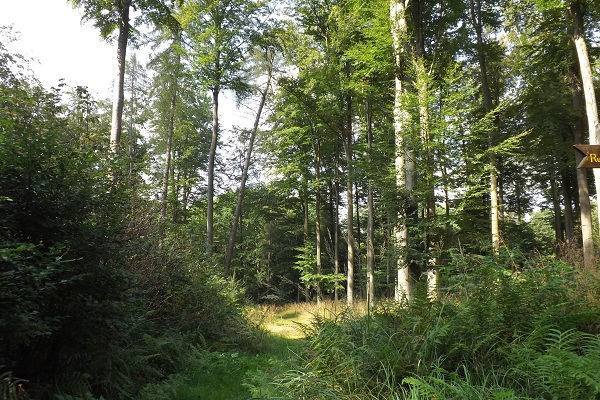 Originally, the walls had a vertical outer side which was likely supported by timber constructions, maybe also by a mix of stone, timber and packed earth. Inside must have been a battlement which was usually achieved by creating a flat top of the wall which sloped down on the inner side. The battlement was likely protected by timber palisades. All that tumbled into overgrown remains of the walls over the centuries. 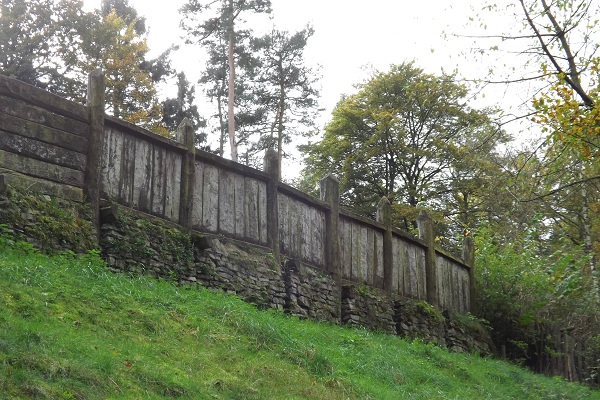 Most of the ringwall forts date to either the – predominantely Celtic – Iron Age or the early Middle Ages. The Römerlager is an early Mediaeval construction. There may have been earlier fortifications from the later Bronze Age in some places that have been reused, but it is difficult to find traces of those. There is no connection with the burial mounds (see below) in the case of Bad Sooden-Allendorf. 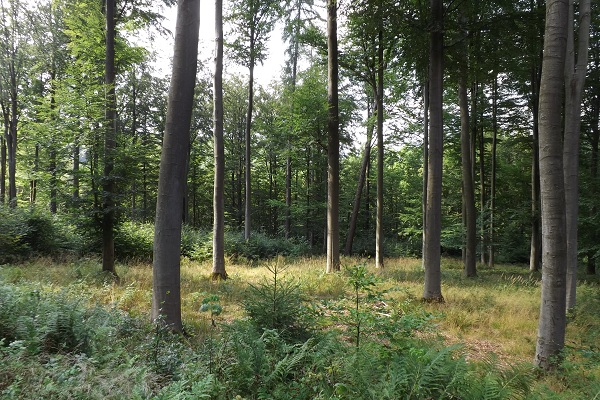 Inside the wall fort

The Römerwall has a size of about 90x110 metres; the walls protected an area of 0.46 hectares in diameter. Some ringwall forts have been investigated by archaeologists and rendered finds like pottery, metal (parts of weapons, kettles and such) and with luck post holes pointing at former buildings. Other walled castles have not rendered any finds and are assumed to have been in use only temporarly, as sacred sites – though those should have left traces – or refuge castles used only in times of war. Finds would be few and easy to miss in such cases. 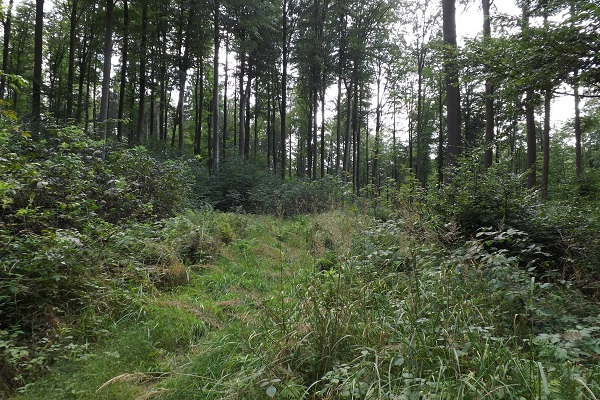 On the remains of the wall

But many of those ringwalls have not been researched in detail; the one near Bad Sooden-Allendorf included. Superficial research did not render any interesting finds, though it is assumed that the fort had been inhabited and timber buildings – houses, workshops, likely granaries and other storage – would have stood inside the wall. 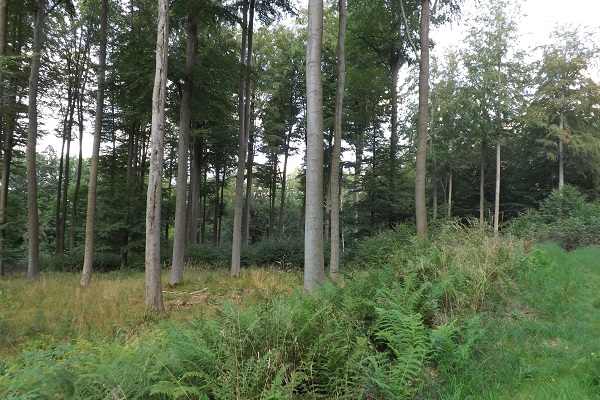 Another shot of the wall

The fort dates to the Carolingian time, likely the late 8th century AD, and served to protect the nearby salt mines at the Werra. It may have been a royal walled castle that later came into responsibilty of the bishop of Fulda to whom Charlemagne granted the salt mines and saltworks in 799 (see post linked above). I could not find out how long the fort may have been in use. 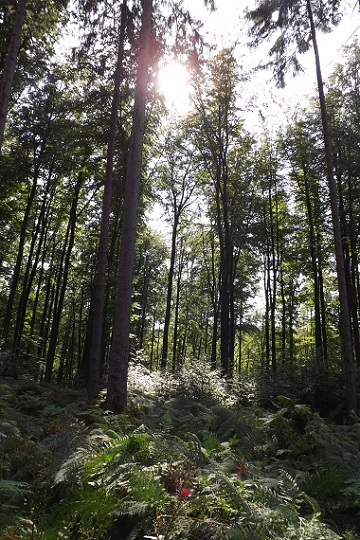 Summer forest near the wall fort

The southern part of the wall and the dry ditch in front are still preseved to a visible extent. They were probably the highest and sturdiest part of the wall, protecting the fort on the flat side with the easiest approach. The other parts on the edge are less well preserved and may have been lower to begin with. 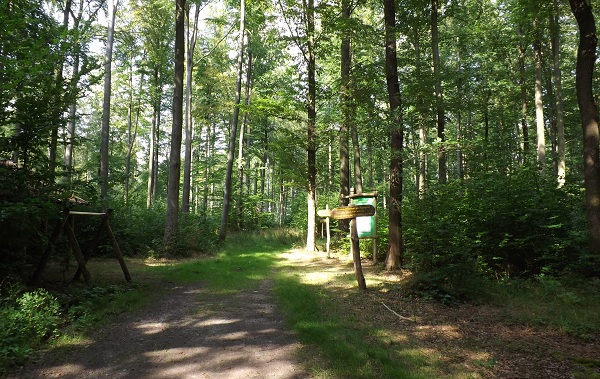 There are several hikings trails in the forests around Bad Sooden-Allendorf and above the Bruchteiche lakes. One leads to another hidden archaeological feature, a set of eight burial mounds from the middle Bronze Age (1600-1200 BCE). Some have been so badly damaged over time that they are difficult to distinguish in the forest, but some are still visible. 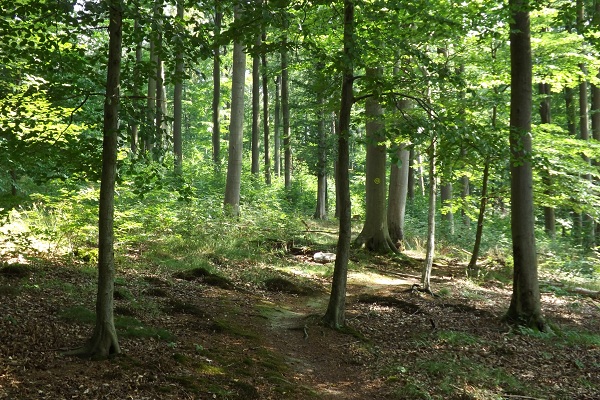 The way to the burial mounds

Burial mounds are not uncommon in Germany; in Hessia – to which Bad Sooden-Allendorf belongs – some 1,400 have been counted, though they are comparably scarce in the Werra valley. The ones in the forest above the Bruchteiche point at an early use of the hill by humans, though it can't be determined with any surety whether there were ongoing settlements from the Bronze Age to the Middle Ages. 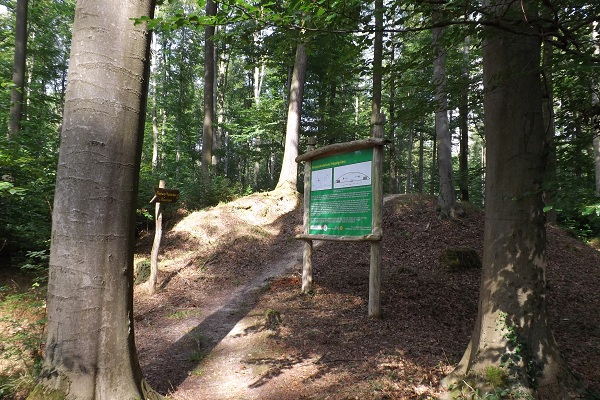 The burial mounds can vary from 2-3 metres and about a metre in height at the centre to larger ones of about 20 metres in diameter and 3 metres high. They usually occur in groups or even burial fields with up to 200 mounds and are made of earth or stone, depending on the material avaliable. The ones of Bad Sooden-Allendorf consist of one large mound of 20 metres (once about 3 metres high) and several smaller ones (the smallest is almost invisible), spread across an area of 100x130 metres. 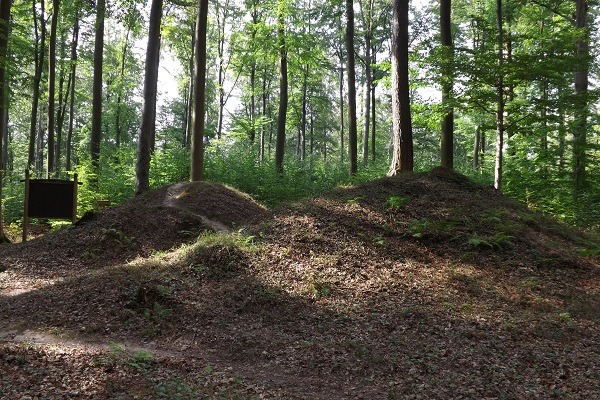 Two of the smaller mounds

Most of those burial mounds date to the Middle Bronze Age, the so-called Tumulus culture (Hügelgräberkultur), and are one of its determinating features, though already the Neolithic Baker culture occasionally used burial mounds, and some can be found as late as the Merovingian time (to ~ 750 AD). The Bad Sooden-Allendorf tumuli have not been throughly researched, but what has been found out dates them to the Tumulus culture. 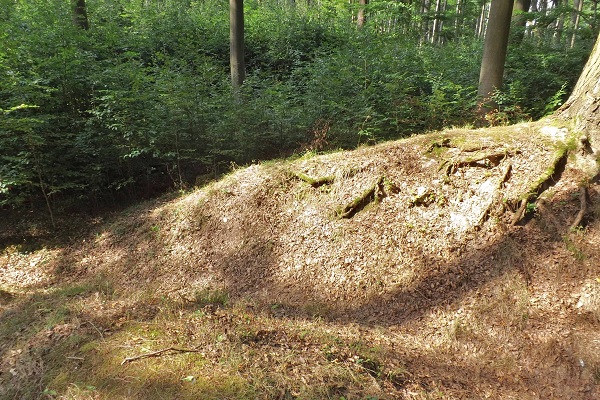 Tree roots digging into a tumulus

Usually, only one person was buried beneath a mound in an inhumation or cremation grave, sometimes within stone circles, but often protected by wooden or leather materials that did not preserve. Grave goods were usually limited (Bronze parts of garments), though some graves with more valuable grave goods like weapons exist; they are assumed to be burials of leaders. Secondary burials have been quite common; other members of a family were entombed in the same place, but sometimes the mounds were also reused in the Iron Age. 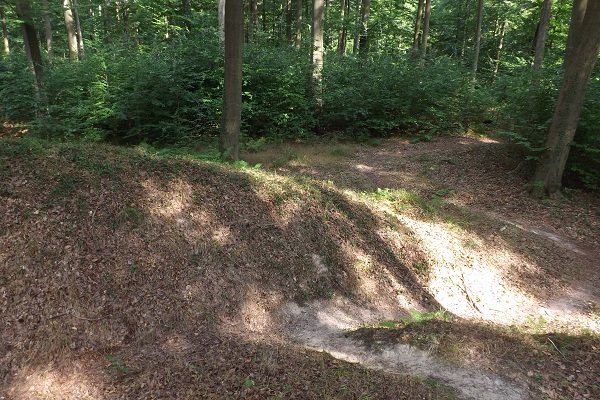 One of the mounds in the Bad-Sooden-Allendorf group had been opened by treasure hunters in 1880, but inside only a stone circle and remains of a fire were found, nothing of value. Another official dig on the large mound showed traces of fire and some bones under the hill – a primary burial, and a stone ring outside the tumulus, covered by earth – which was likely a secondary burial. One mound has unfortunately been cut in two at some point. 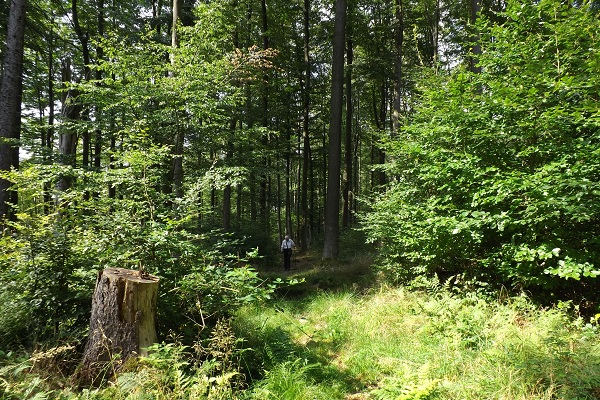 The Middle Bronze Age, dating to 1600 - 1200 BCE, only counts as such in central Europe, and only there it is known as Tumulus culture. The epoch already ended in 1600 BCE on Crete and in Greece (where it began in 2000 BCE), while in Scandinavia – and to some extent in northern Germany – it lasts from about 1300 - 1000 BCE. The different dates show a cultural gradient, though finds from fe. Greece (which would date to the Late Bronze Age there) can be found in Middle Bronze Age contexts in central Europe.   ¶ June 20, 2021