23 Feb 2019
Between Polish Kings and Teutonic Knights - A History of Mediaeval Gdańsk / Danzig
I only spent a few hours in Gdańsk (Danzig in German; also used in English books about the historical Gdańsk), sufficient for a walk through the historical part of the town with its interesting and important buildings, but not enough time to visit the interior of the Crane and the Town Hall. But I got plenty of photos to illustrate a few posts. 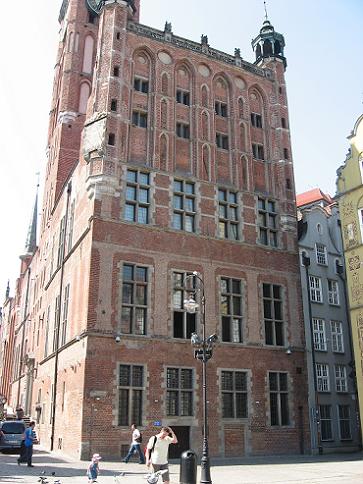 Danzig, Town Hall of the 'Town of the Law'
'Town of the Law (Rechtstadt) refers to the part of Danzig that got town rights in 1224; not to be confused with the - much younger - Old Town.

There had been settlements by Baltic and Slavic tribes (and probably some Goths as well) at the site where the Motława confluences into the Vistula (Weichsel in 'German) since Prehistoric times; the Amber Road went all the way from the Vistula delta to the Mediterranean. Amber has been found as far away as Egypt tombs. 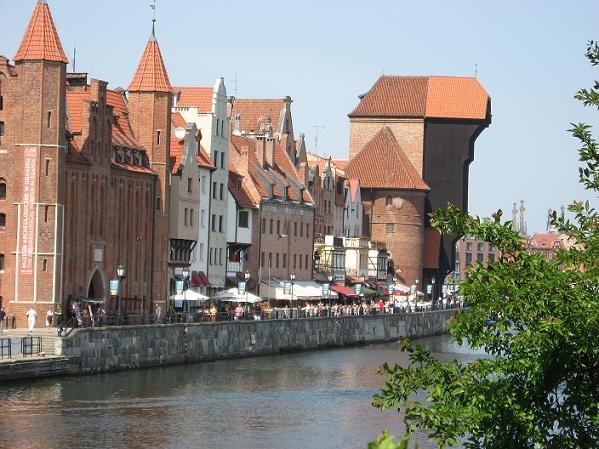 Danzig, the harbour at the Motława river with the Crane Gate in the background
The first attempts to Christianise the people in the area that came to be known as Pomerelia were made by bishop Adalbert of Prague in 997. Danzig was mentioned as 'urbs' (town) in a chronicle of the time. In 1185, Duke Sobiesław of the Samborides - the only ducal family of Greater Poland not belonging to the network of Piast dukes - founded the monastery of Oliwa near Danzig. At the time, the number of German settlers and merchants looking for new homes in the Slavic lands in the east increased, often encouraged by local rulers.

Sobiesław's grandson, Duke Swantopolk II of Pomerelia-Gdańsk granted the town the rights under Lübeck law in 1224. Swantopolk created an independent duchy by kicking the Danish overlord (King Valdemar II) out and ambushing the High Duke of Poland, Leszek, on his way to the assembly of the Piast dukes, which led to Leszek's death. But the Samborides died out in the male line (1994), and Pomerelia became part of Poland again under King Przemysł II in 1295. He granted Danzig, which by the time had developed into a city with both German and Polish inhabitants, the Magdeburg Law. He also put a Polish garrison in the castle (situated in near the Great Mill in what is now the Old Town). 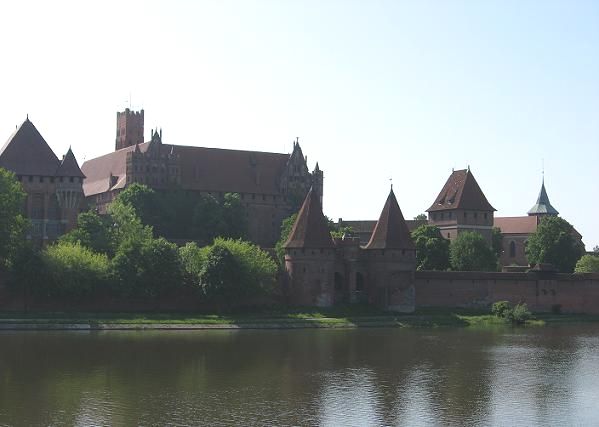 Małbork Castle (Marienburg) near Gdańsk, the main seat of the Teutonic Knights
The German margraves of Brandenburg and the Teutonic Knights both had interests in the area as well, a fact that would lead to an explosive mix when Przemysł II married Margaret of Brandenburg shortly before he was crowned king in 1295. A botched kidnapping attempt led to his death but a few months later. It is still disputed who was responsible, the ducal family of Brandenburg or disgruntled Polish nobles, or maybe an alliance of both.

Since Margaret was descended from the Pomerelian nobility on the maternal side, the Margrave of Brandenburg laid claim to the heritage. Przemysł's successors meanwhile had a lot of problems and internecine strifes. In the end, the governor of Danzig under King Władysław I Łokietek (the 'Elbow-High) called for the aid of the Teutonic Knights against the forces of the Margrave of Brandenburg in Danzig. The knights relieved the Polish garrison in the castle and drove the margrave's men out of the town. The citizens welcomed the interference of the Teutonic Order at first, but when they made no attempt to return the authority to the royal administration (for one reason because the king refused to pay them for their services), the inhabitants of Danzig rose against the Order. The rebellion was brutally crushed, a - still disputed - number of both German and Polish inhabitants killed and part of the town destroyed. 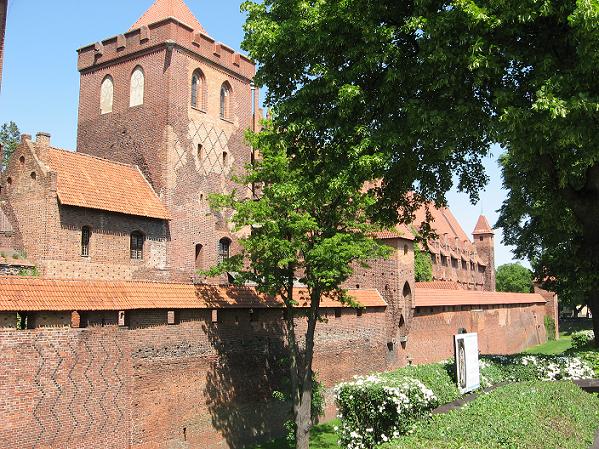 Marienburg, the High Castle
The Teutonic Knights then conquered the rest of Pomerelia and, to be on the legal side, bought the Margave of Brandenburg's claim off with 10,000 gold marks (Treaty of Soldin). Poland had lost direct access to the Baltic Sea.

The Grand Master Heinrich of Plötzke wanted to prevent a unified Polish kingdom, no matter that he once had been a fried of King Władysław. With the crusades in the Holy Land having ended, the order transfered their main seat from Venice to Małbork castle near Danzig, so the strengthening of territorial claims in the north-east is understandable.

But the Teutonic Knights had misjudged the feelings of the Pomerelian local nobility who continued to give their allegiance to the King of Poland, not the Order. After their legal attempts to regain Pomerelia before the ecclesiastical court of the Pope failed, war broke out in 1326. It ended with the Peace of Kalisz 1343. King Casimir III of Poland had no choice but to relinquish his rights to Pomerelia and the towns within, including Danzig, and gift them to the Teutonic Knights as 'perpetual alms'. Though he kept the title of Duke of Pomerelia and thus a theoretical claim of souzerainty. 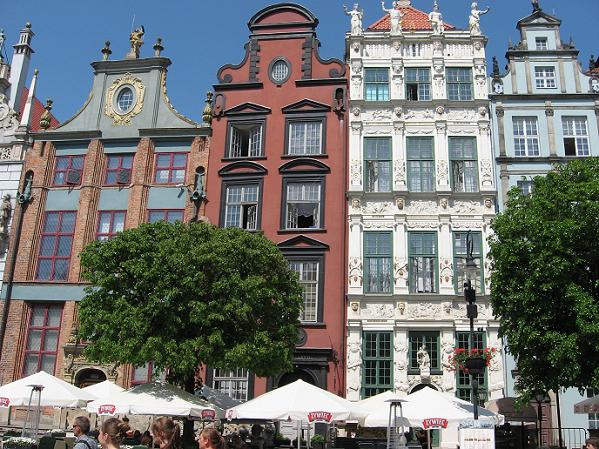 Danzig, gabled houses in the Długa Lane
The Teutonic Knights enforced the Kulm Law (a variant of the Magdeburg Law used in all lands of the Order). In 1361, Danzig became member of the Hanseatic League.

In 1370, the last of the Piast kings of Poland, Casimir III the Great died. His sister Elizabeth was married to Charles of Hungary, who was a member of the Capetian house of Anjou (his father had married a Hungarian princess). Their son Louis would eventually become King of Poland. But he had only girl children: Maria who succeeded him in Hungary, and Hedwig / Jadwiga who became 'king of Poland' in 1384. At the same time, the still pagan Great Duke of Lithuania, Jogaila, saw his chance. Supported by a number of Polish nobles, he accepted baptism, the name Władysław II Jagiełło (in English also spelled Ladislaus), and the hand of young Hedwig (1373 - 1399).

His nephew Vytautas (Vitold) allied himself with the Teutonic Knights in order to strengthen his position in Lithuania, but eventually realised that he was casting out the devil with Beelzebub and joined with Jagiełło instead. Both established the personal union of Poland and Lithuania under the overlordship of the Polish king (Union of Vilnius in 1401).

The Teutonic Knights suddenly faced a formidable alliance of enemies. The enusing war culminated in the Battle of Tannenberg (also known as Battle of Grunwald) on July 15, 1410. The united Polish-Lithuanian forces won the battle, but failed to conquer Małbork Castle (Marienburg), the main stronghold of the Teutonic Knights. Thus the Teutonic Knights were weakened, but not defeated. Though they did not lose any lands, they had to pay heavy reparations in consequence of the Peace of Thorn. To meet those, the Knights confiscated goods and increased taxes. 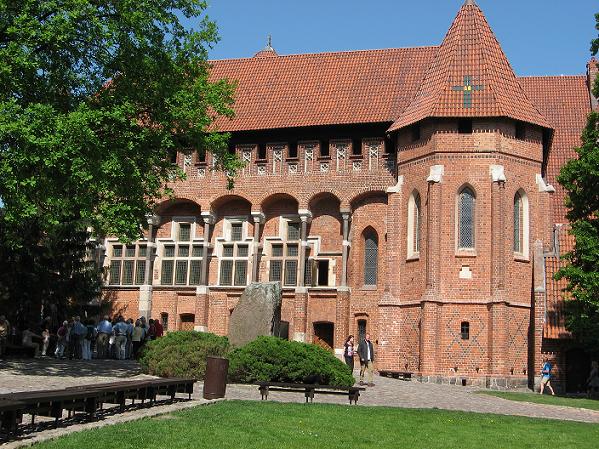 Marienburg, Palace of the Grand Master
The burghers of Danzig refused to pay those taxes. The Order closed the harbour and executed several patricians, among them the town major, for high treason. Nevertheless, a precarious peace was established once again - no party was interested in a destruction of the town.

In 1440, Danzig joined the Prussian Confederation, a coalition of several cities and a number of nobles against the machinations of the Teutonic Order. The Confederation offered King Casimir IV Jagiełło for Prussia to become a fief of the Kingdom of Poland in 1454, thus gaining his support in the war with the Order. During the war, the castle in Danzig was destroyed - likely not only to deny the Order a foothold, but also to prevent the king of Poland to put a garrison in the castle. Danzig wanted to remain as independent as possible.

The war ended in 1466 (Second Peace of Thorn), western Prussia with Danzig became part of Poland which finally gained a sea port again; eastern Prussia remained with the Teutonic Order as Duchy of Prussia. Most sorely felt by the Teutonic Knights was probably the loss of the Marienburg which fell to the Polish Crown. The Order moved its main seat to Kaliningrad (Königsberg). Danzig - which basically had financed the war for the king - kept most of its privileges, like minting rights, diet meetings, and the administrative use of the German language. 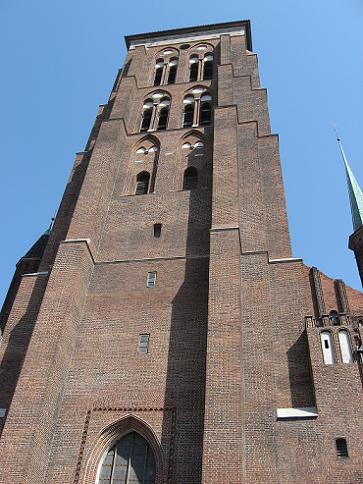 Danzig, St.Mary Church, west tower
Danzig's importance increased with the fall of Constantinople to the Turks in 1453 and the subsequent loss of the Black Sea harbours. Corn from south-eastern Europe had to be transported on the Vistula via Danzig to the trade centres in England, Scandinavia and the Netherlands.

An attempt by the Teutonic Knights to regain the town in 1520 was thwarted when the king of Poland sent a relief force. Danzig and the part of Prussia called Royal Pomerania became part of the Polish-Lithuanian Commonwealth, one of the largest countries in 16th-17th century Europe. It was officially established in 1569 (Union of Lublin). In 1577, another Polish king of the Jagiellonian dynasty who got the job iure uxoris, Stephen Báthory, refused to acknowledge the privileges of 1466, whereof the city refused homage. Stephen laid siege to the town, but unsuccessfully, and in the end had to renew the privileges.

At that time, Danzig held the staple rights, a privilege that involved a lot of money. By the early 17th century, the town was the most importand transshipment point for corn in Europe. It was the time of bloom for Danzig; its pretty Renaissance buildings date to the 16th century. 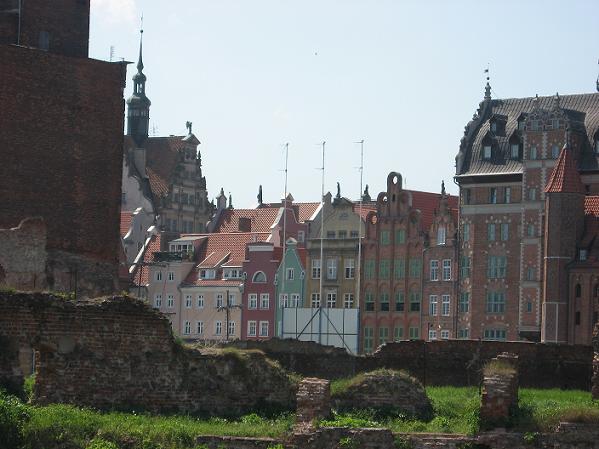 Danzig, remains of the town fortifications (foreground) and the harbour front
The next post will be a virtual tour through the town.

Comments:
Greetings, I found your blog through the regional forum of NaNo and I love what I've read so far! I'm especially interested in Polish history and must say you did a great job. Next summer I'll be visiting Poland; Gdańsk and Małbork. This post really made me looking forward to that trip! And bonus points for the correct spellings. Sadly Polish get's butchered a lot :(