9 Sept 2018
Hiking in the Harz - Bode Canyon and Rosstrappe Cliff
The Harz has some beautiful and even spectacular landscapes, from tree-covered mountains and semi-Alpine meadows to charming little valleys with sparkling rivers, from windswept peaks and cliffs to canyons with waterfalls and rivers whose brown waters gush over boulders in vivid currents, from caves and abandoned mines to natural lakes and reservoirs lying in silent beauty. Most of the Harz been declared a natural preserve for a reason. 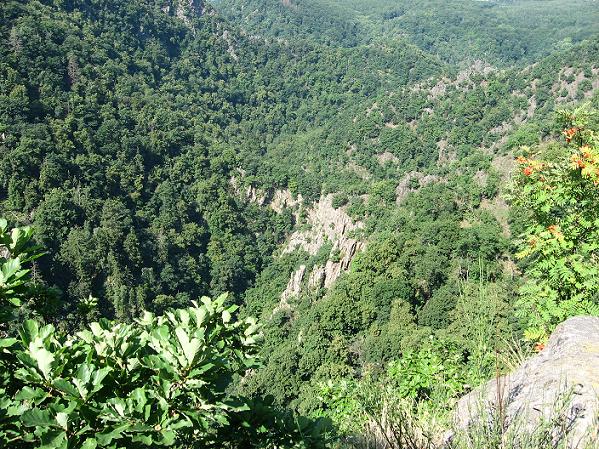 View from the Rosstrappe Cliff into the Bode canyon

I've been hiking there a lot - often together with my father - but only posted a small part of my photos so far. So there will be a series of Harz posts, among others, in the next months. 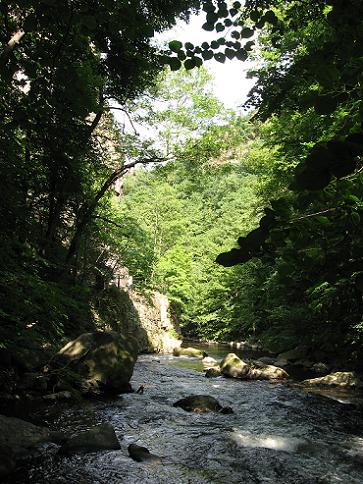 In the Bode canyon
This time I'll cover another combination of river valley and cliffs framing it, like the Ilsestein and Ilse Valley: the Rosstrappe Cliff and the Bode Canyon which are even more spectacular, though there are not so many legends connected with them. 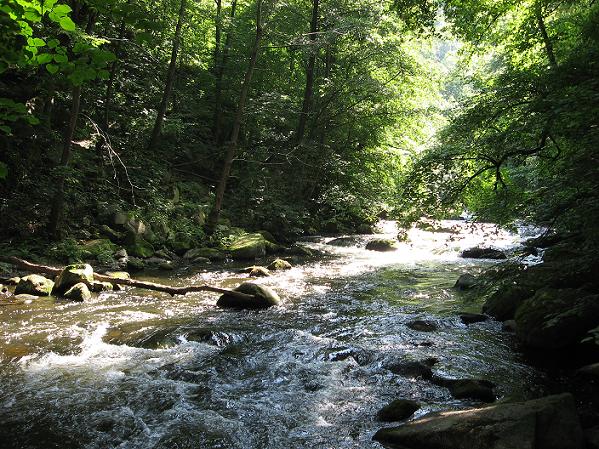 Bode river
The Bode canyon is sometimes called the 'German Grand Canyon', but there are quite some differences. For one, it's a lot smaller. The canyon proper is only the part of the Bode between Treseburg and Thale; some 17 kilometres. The ravine is 140 metres deep around Treseburg and 280 metres at Thale, the river is between 7 and 25 metres wide; the downhill gradient of the river in the gorge is 100 metres. Second, the Bode canyon is much younger: 450,000 years compared to the 5 - 6 million years the Grand Canyon took in developing. 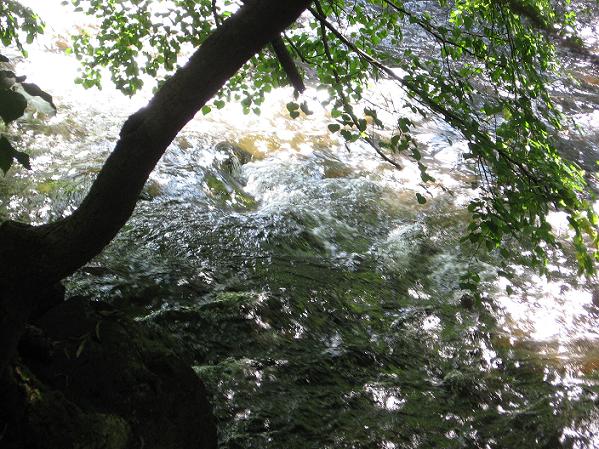 Rapids and whirlpools
The river is allowed to run unchanged in the canyon. There are parts with rapids and whirlpools, sometimes the river runs so close to the rocks that only a small part remains for hiking along it, in other parts the valley widens and the river runs more gently. The riverbed is littered with rocks in some places, in others the tree branches touch the water. A lovely and almost primeval scenery for hiking. 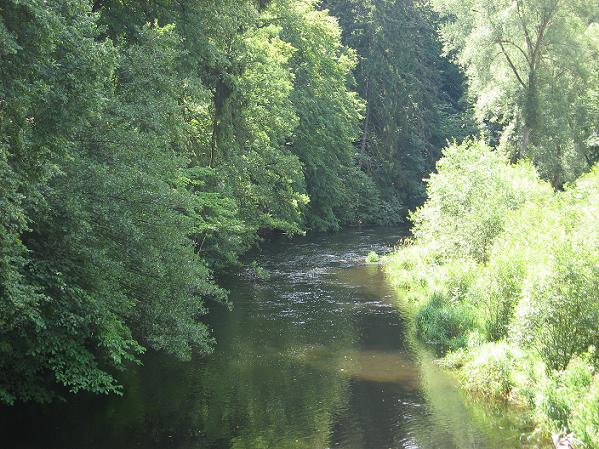 Sometimes the river flows more calmly
Nowadays the Rappbode reservoir system influences the water regime in the valley. Extremes reach from an outflow of 350 m/s during spring floods to the river falling almost dry. Fortunately, a plan from 1891 to impound the Bode river in the canyon by a 150 metres high dam came to nothing. Instead, the valley became a natural reserve already in 1937, ecompassing 474 hectares. 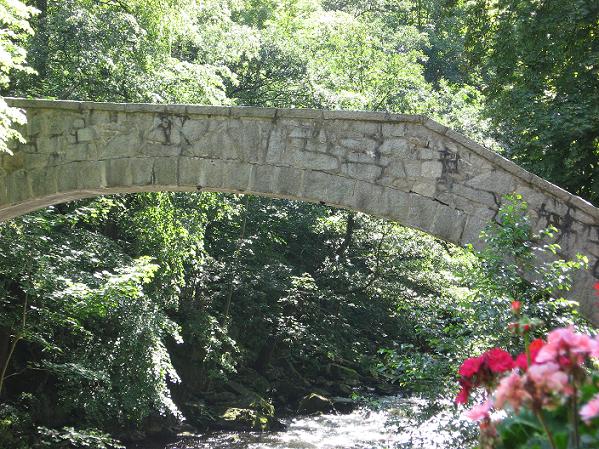 Bridge across the Bode in the Hirschgrund
There is a tavern in the middle of the valley, with a nice beer waiting for a thirsty wanderer. I took the shot of the bridge from its terrace.

The microclimate in the Bode canyon varies a lot within a small area. Patches that are either sunny, shaded, dry or wet offer a lot of different vegetation and biotopes. The temperature is 1.5°C lower than the surrounding area, and there is a 150 millimetres higher precipitation. On a hot day, the valley is a slightly cooler place for a hike. 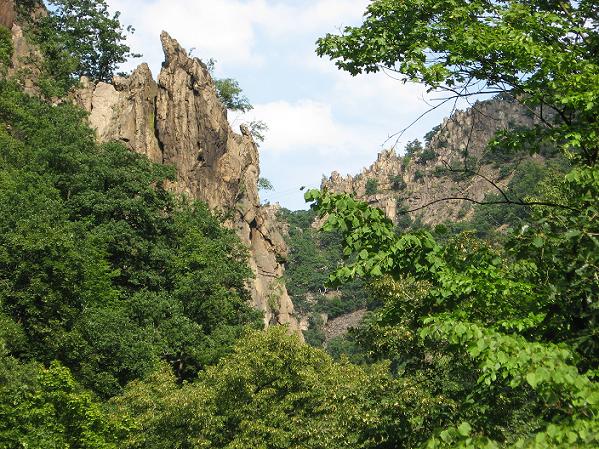 The Bode canyon
I've already given some information about the Bode river system in the post about the Rappbode reservoir. The river is 169 kilometres long; its two main headwaters, the Kalte Bode and Warme Bode (wich is indeed 2°C warmer than her 'cold' sister) rise in the Brocken Field beneath the Brocken summit at about 860 metres. They confluence shortly before they reach one of the forebay bassins of the Rappbode reservoir system, and leave the Wendefurth retention bassin to continue north-east through the canyon. After passing Thale, the Bode river runs through the Harz foothills and the town of Quedlinburg, and confluences into the Saale river near Nienburg. 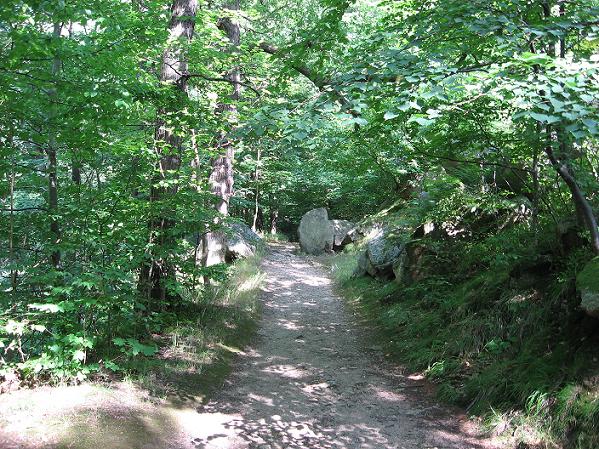 Way along the river
The Bode cuts through some interesting rock formations in the ravine. There is the so-called Ramberg granite with quartz veins which rose to the surface about 300 million years ago. It dominates the highest rocks formations of the cliffs. Since the granite has a high share of feldspar, its colour is rather light. Other rocks are metamorphic hornfels and slate which developed in the contact zone of the granite. Those are much darker in colour. The oldest rocks - some 400 million years - are Devonian diabase and graywacke; those can mostly be seen in the bottom of the ravine. 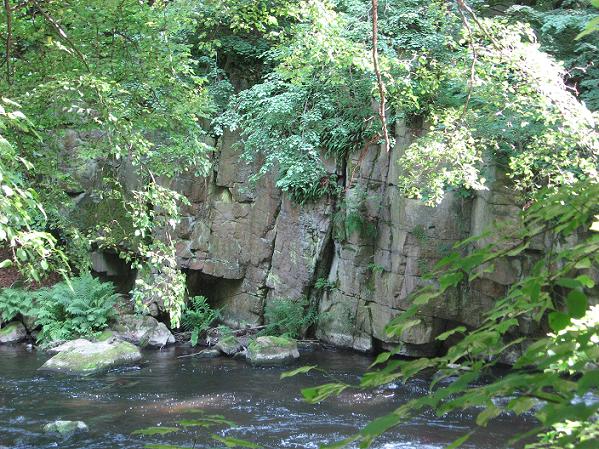 Diabase rock formation in the valley
As usual, erosion has led to a lot of stones and boulders breaking off the cliffs which now litter the ground, their edges smoothed by rain and the floodwaters of the river. It was a game of 'pick your path' in a few spots. 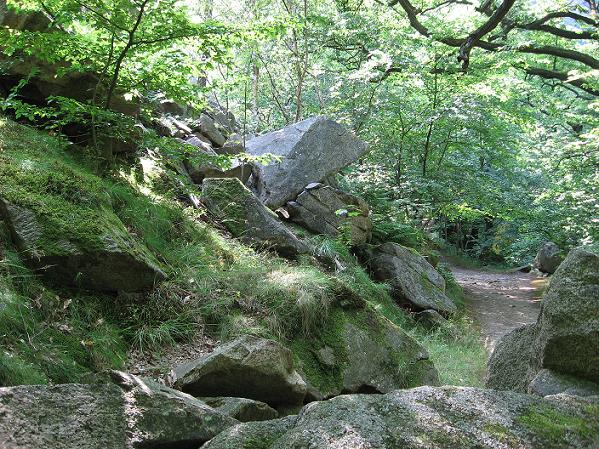 Boulders on the way, again
One can climb up to the Rosstrappe Cliff, but one can also take the return hike along the river and drive up the mountain. We picked that option; a winding path covering a rise of 400 metres sounded a bit too much work for a hot day (not to mention we'd have to descend again to get to the car).

There is a restaurant on the plateau behind the cliff, but while the Rosstrappe is a popular destination, it is not so overpriced and overcrowded by tourists as the nearby Witches' Dance Floor (Hexentanzplatz). 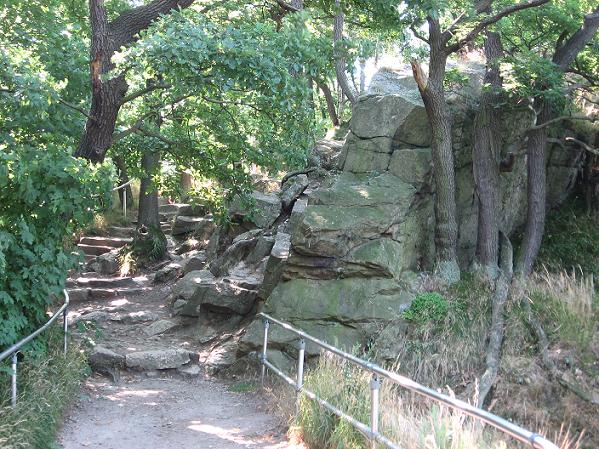 Way to the Rosstrappe Cliff
The Rosstrappe is one of the most impressive rock formations north of the Alpes. The southern cliff reaches out into the Bode valley, a 200 metres granite wall that rises almost vertically from the bedrock. The views from the cliff to the Witches' Dance Floor, the Harz footlhills and the Brocken, as well as down into the valley are spectacular. 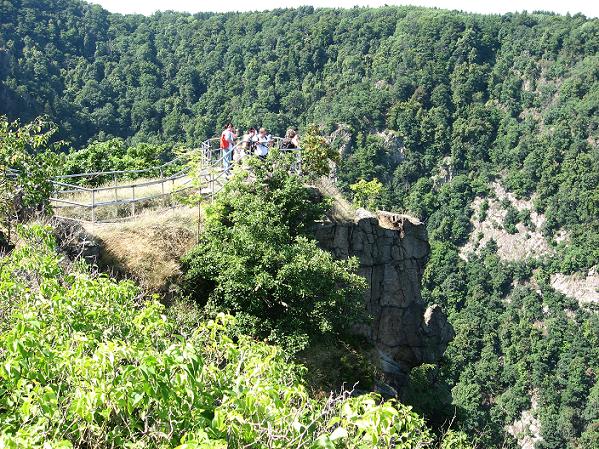 On the Rosstrappe
Near the Rosstrappe cliff are the remains of the refuge fort Winzenburg, a rampart of rocks and earth, surrounding an area of 25 hectares, which had been in use from the Younger Neolithicum to the Iron Age. The wall offered protection for men and cattle, and likely was a a sacred area during some periods. Not much is visible today. A lookout tower had been built in 1860, but it is no longer in use and not safe. 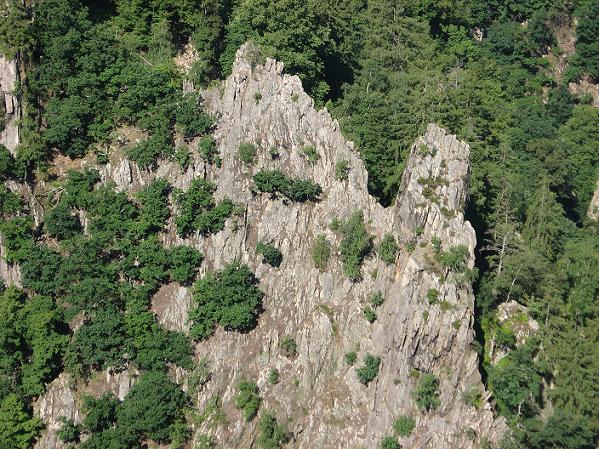 Other cliffs seen from the Rosstrappe
Besides the ragged granite formations we also get some fine examples of spheroidal weathering (for an explanation see the post about Ilse's Rock, linked above) on the other side of the ravine. 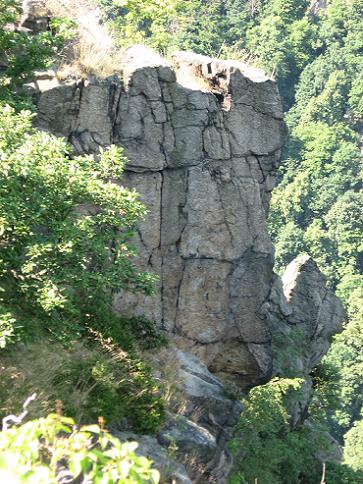 Rock formation with spheroidal wheathering
The Witches' Dance Floor plays a role in the legends connected with the Harz witches. They used to gather there before they flew off to the Brocken on Walpurgis Night. Its origins - according to legend and local websites - go back to a Saxon cult place where the old Germanic goddesses were worshipped on the night to May 1st. When the Christian Franks conquered the Saxons, those celebrations were forbidden, but still conducted in secret; hence the name became connected with witches. 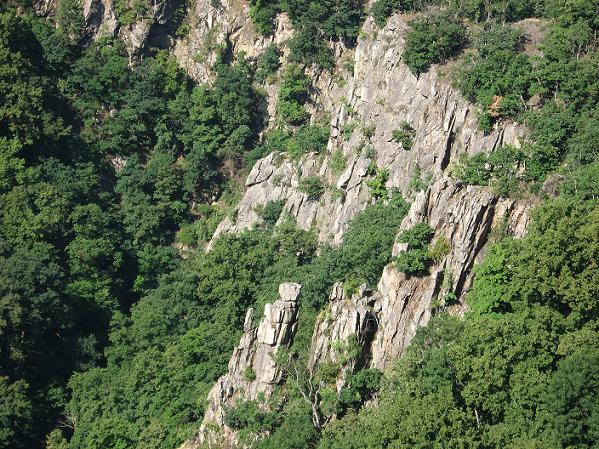 View to the cliffs below the Witches' Dance Floor
No Harz hike without at least one legend. This one tells about the beautiful king's daughter, Brunhilde, and her suitor, the giant Bodo. But Brunhilde did not want to marry Bodo and sent him away every time. Yet he would not give in - today we'd call him a stalker. One day, Brunhilde was out riding on her white horse when she beheld the giant coming after her. She spurred the horse into a gallop and they raced along the cliff, Bodo in hot pursuit. But then she found herself at the edge of the abyss, with the sound of Bodo's steed coming closer. She urged her mount to jump the ravine, and luckily reached the other side. Only her golden crown fell into the river below. Where the horse landed, it left behind a hoofprint in the rock. 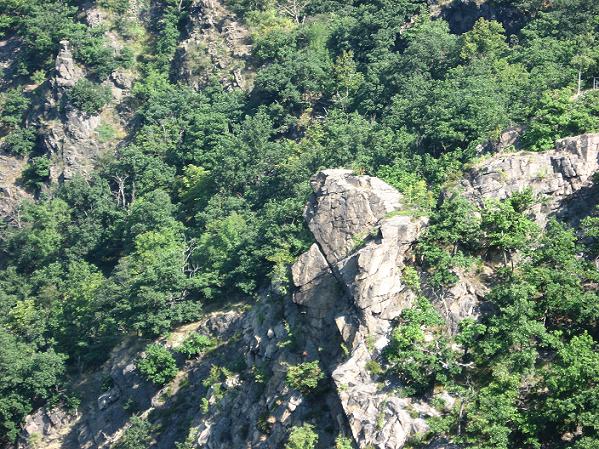 The rock from where the princess jumped
The giant Bodo jumped after her, but his horse failed and he fell into the gorge. He was changed into a black dog as punishment for his evil lust, and he still guards Brunhilde's golden crown in the valley of the river that bears his name. 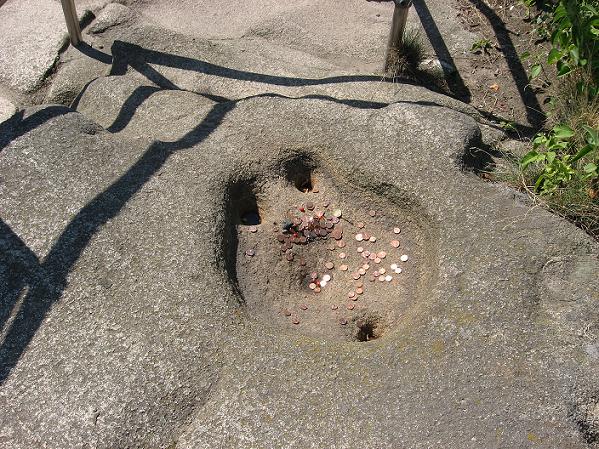 The hoofprint
The Rosstrappe proper (Ross is an old German word for 'horse' and Trapp[e] means 'step') which gave the entire cliff its name is a pear shaped hollow in the rock; 70 cm long, 55 cm wide and 13 cm deep. Some theories assume that it could be an old, man-made sacrifical bowl of Germanic origin since the plateau had been settled for 5,000 years, but there is no final proof; it could as well be a natural feature. But it's considered lucky to throw a coin into it. Most of them are 'European' cent pieces. 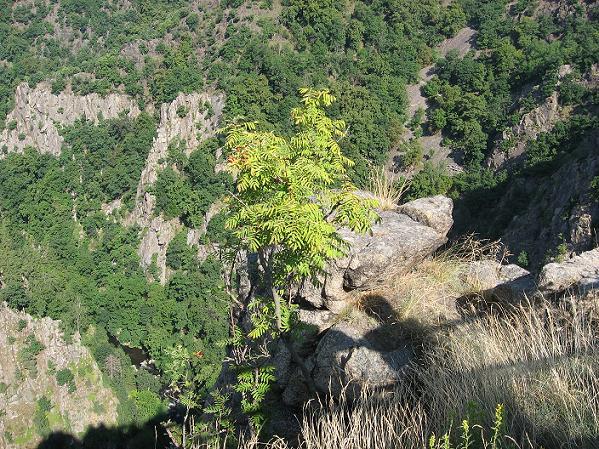 Another view into the Bode canyon
I'll leave you with two more photos of the Bode and Rosstrappe, just because I have so many pretty ones I can't decide which to use for the blog. 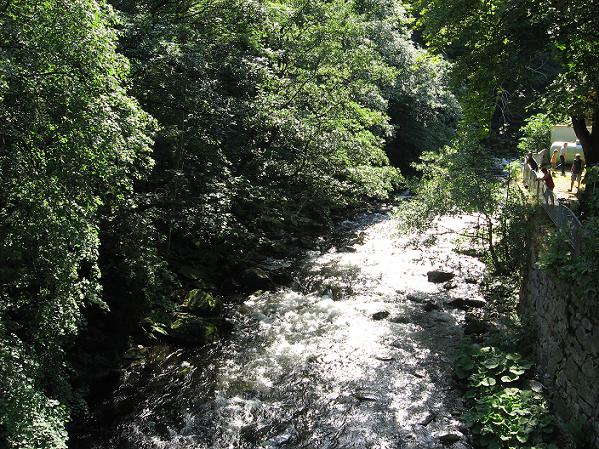 The Bode river, seen from the bridge
And here is a final shot of the spectacular cliffs framing the canyon. One wonders how the trees manage to cling to the granite - that's another difference to the Grand Canyon in the US. 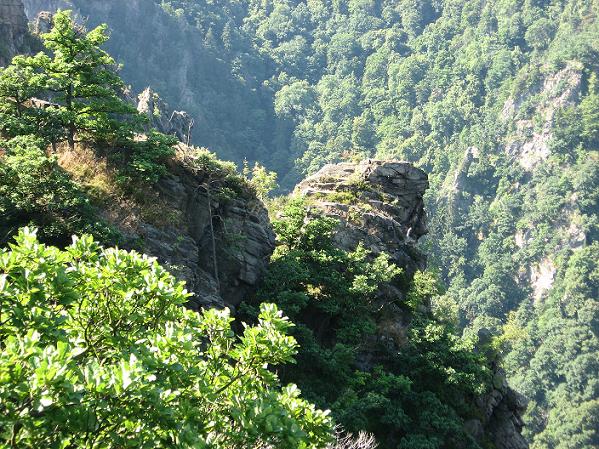 Another view from the Rosstrappe
I got another hiking tour from that summer a few years ago, which will cover the Devil's Wall, another rock formation near the towns of Thale and Quedlinburg (where we stayed for several nights).  ¶ September 09, 2018