26 Oct 2020
Stapelburg Castle – A Little Known Ruin in the Harz
I came across that one a few years ago during one of the Harz tours I did with my father. The ruins of the Stapelburg – only the ringwall, bits of the curtain wall and part of the palas, the great hall, remain – are situated on a hill between Bad Harzburg and Ilsenburg on the northern foothills of the Harz. The land there is already rather flat, so the 60 metres hight hill stands out and offers a good view to Wernigerode and Halberstadt, and even the Brocken mountain on clear days. 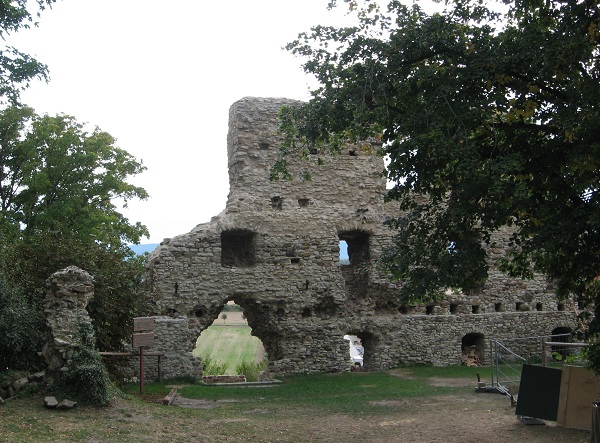 Stapelburg - remains of the palas building

A good place for a castle. Yet it was not easy to find much information about the Stapelburg; I could not even figure out if the preserved remains date to the first period (13th - 14th century) or the second phase of its use in the 16th century (which is more likely). The well house and a cellar have been recently restored. 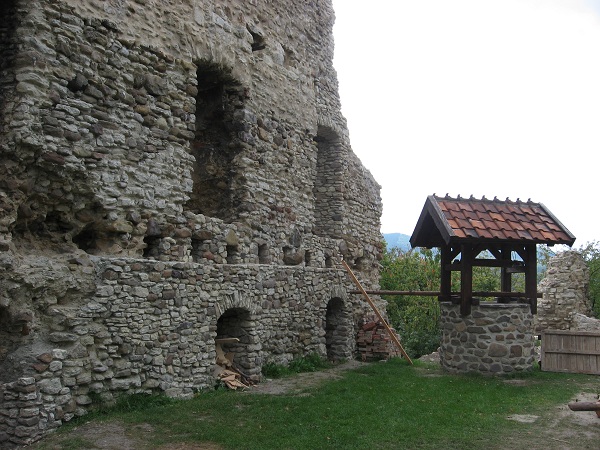 Its early history is not known – like the early history of many castles that are first mentioned in chartes in the 12th or 13th century but must have existed before. The Stapelburg may well be one of the foundations of the Salian emperors and thus dating to the 11th century. It could have been part of the chain of castles Heinrich IV erected in the Harz and enfeoffed to nobles like the Wernigerode family who originated in Swabia and moved north with Heinrich IV. 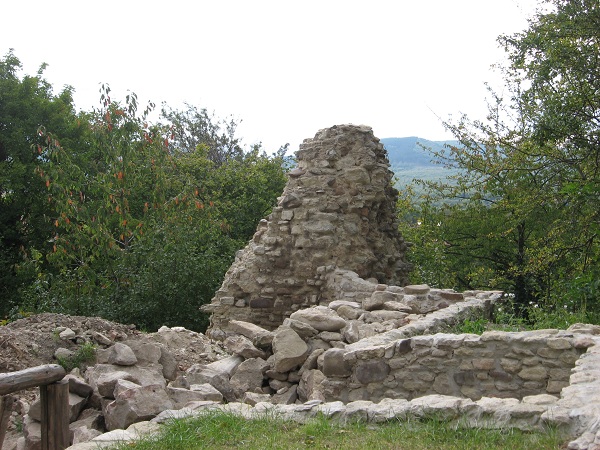 Remains of the curtain wall with foundations of other buildings

The name Adalbert of Wernigerode is indeed connected with the castle. The problem is that a whole bunch of counts of Wernigerode were named Adalbert between 1121 and 1319, so it is difficult to establish a timeline. The first traceable mention of the castle beyond local tales is a charte from 1306 (at that time the count of Wernigerode was indeed another Adalbert), in which it is called a 'fortified castle' (vestes slot). 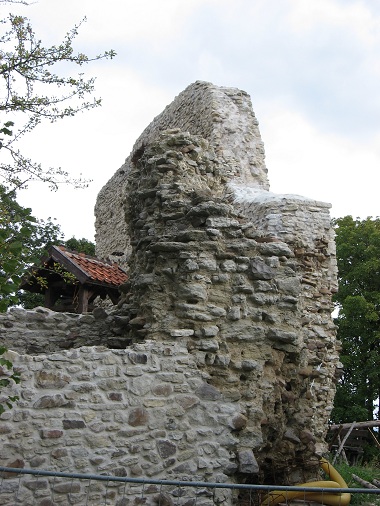 Palace wall seen from the outside 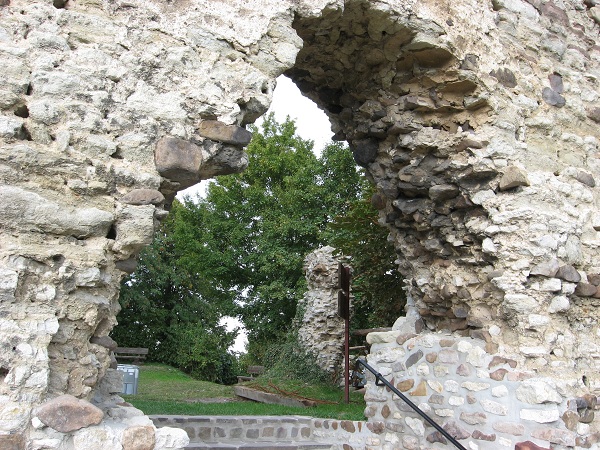 View through the palas gate to yard

The first castle had an unusual design. Judging by archaeological traces it was a rotund construction, not the usual square or rectangular pattern. An influence from the crusades is possible; there are some castles in Germany following an octogonal or round design, like the chapel in the Krukenburg. The double ringwall with its dykes and earthern walls is still well visible in the landscape. 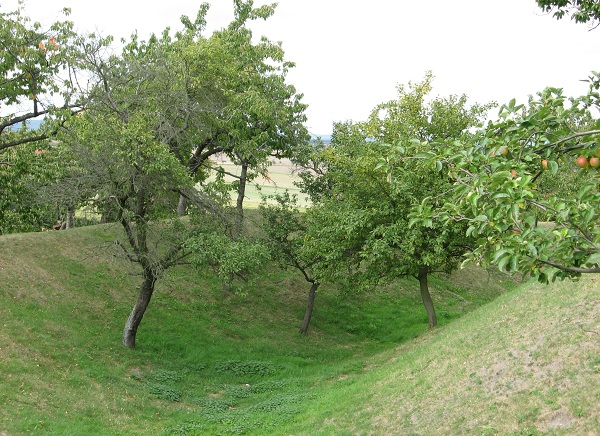 Remains of the ringwall moat

Some counts of Wernigerode seemed to have been of a belligerent disposition and got into feuds with the counts of Regenstein (another old post in need of a rewrite *sigh*) and of Hohnstein, and thus incurred the wrath of the bishop of Magdeburg and the dukes of Braunschweig. Count Conrad of Wernigerode was captured during a skirmish, and his brother Dietrich had to acknowledge the bishop of Magdeburg as feudal overlord (1381) and agree to a Landfrieden - peace of the land (1384). 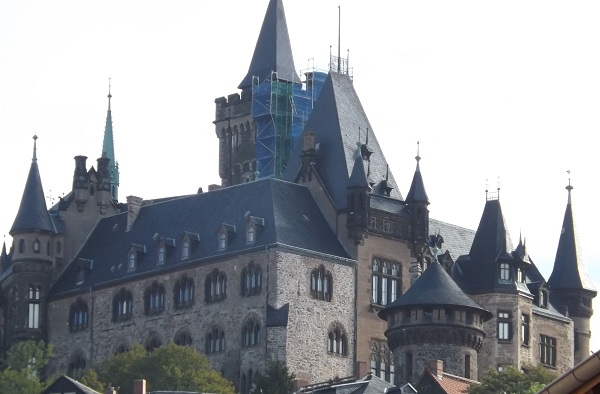 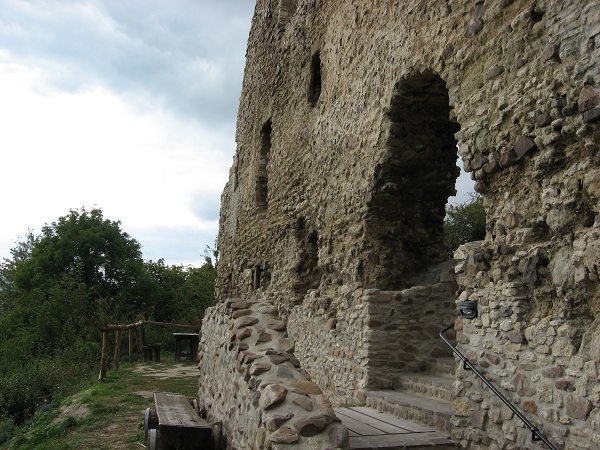 Stapelburg, palace walls from the outside

The counts of Wernigerode got into financial troubles and had to pawn out the Stapelburg several times. In 1394, they sold the castle to the Chapter of Halberstadt. The Wernigerode family died out in the male line but due to an inheritance treaty, they were succeeded by the related Stolberg family and became known as counts of Stolberg-Wernigerode. Count Botho of Stolberg received the Stapelburg as pawn from the Chapter of Halberstadt in 1432. 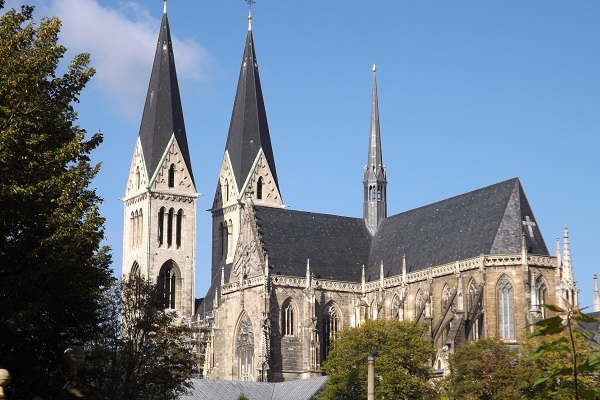 The cathedral in Halberstadt, seat of the Chapter of Halberstadt which held the Stapelburg several times during its history

But the Chapter of Halberstadt redeemed the pawn which shifted possession a few times in the years to come. None of the owners cared to repair the castle. Finally, it came back to the Stolberg family in 1509 – it was again in the hands of the Chapter of Halberstadt which was under the administration of archbishop of Magdeburg at the time – who pledged themselves to repair the castle. But Botho of Stolberg and his father did not have the means to achieve the necessary repairs and modernisations. 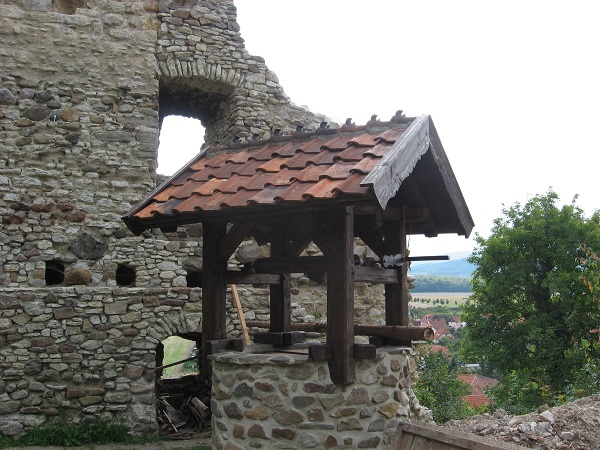 In 1559, the pawn was forfeit and returned the archbishop of Magdeburg who installed Heinrich von Bila, of an old noble family with possessions in Thuringia and Saxony, and member of the Imperial Chamber Court (Reichskammergericht). The counts of Stolberg refused his installment, but hat to give in after a big quarrel. 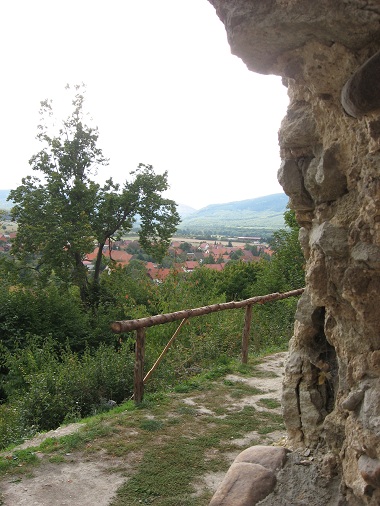 View to the village Stapelburg

Heinrich von Bila gave the castle a House Makeover, built a new palace and housing for a garrison of 14 soldiers and a captain with their families, and repaired the curtain walls. He also founded the village at the foot of the hills, first called Bilashausen but today known as Stapelburg. 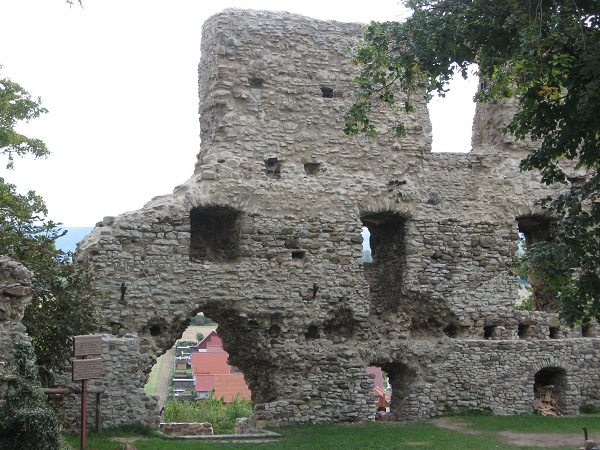 Closeup of the palace wall

Heinrich von Bila's son either had no interest in the castle, or his father had spent too much in the house makeover, so he sold the castle to Statius of Münchhausen in 1596. Münchhausen was a nobleman turned mercantilist and industrialist who collected castles, invested in iron mining and smelting, and built palaces in the style of the so-called Weser-Renaissance. In the end, he ruined himself by speculation and had to sell the Stapelburg to the Chapter of Halberstadt in 1625 (yes, Halberstadt again; I don't make that up). 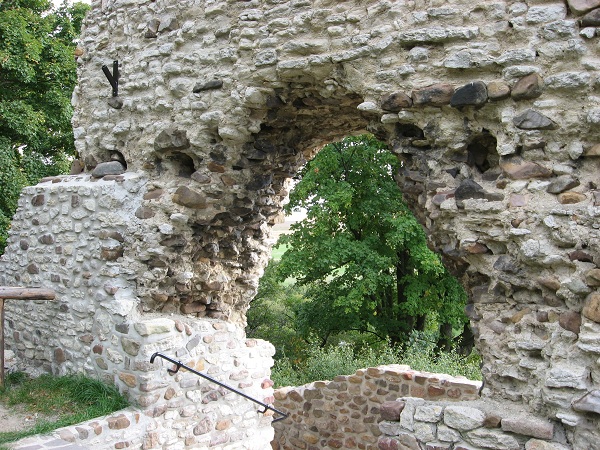 View through the gate out of the castle

The Chapter gave the castle to one of its members, Eberhard von Münchhausen, of a different branch of the family. He lived in the castle during the Thirty Years War – that is, when it was not occupied by either Wallenstein's army (which plundered the village) or the Swedes. After the war, he sold the rundown place to a family von Stedern, obviously with agreement of the Chapter of Halberstadt. The family lived in the castle for a few decennies; their members were buried in the church of the village. 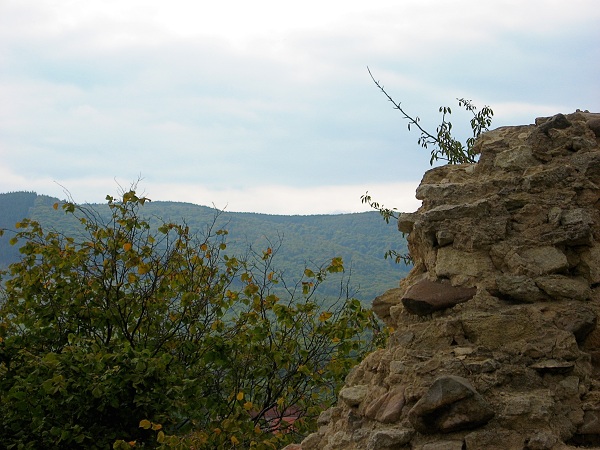 Curtain wall with view to the Harz mountains

In 1722, King Friedrich Wilhelm of Prussia annuled the feudal position of the Chapter of Halberstadt. The counts of Stolberg used the chance to get the Stapelburg back, more for its symbolical value, I suppose. A few lawyers got rich, the castle declined further, but in the end, it came into the hands of the counts of Stolberg in 1727, as part of the county of Stolberg-Wernigerode. 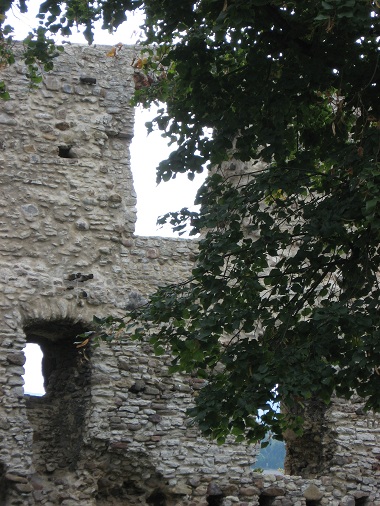 Closeup of the palace windows

The castle was no longer habitable and was used as quarry by the villagers. What the counts got were some picturesque ruins. Well, they had better palaces in Stolberg and Wernigerode. Today, only an outer wall on the southern side which must have been part of the fomer palas or great hall, and a few minor bits of the curtain walls remain, as well as distinct traces of the double moat in the landscape. 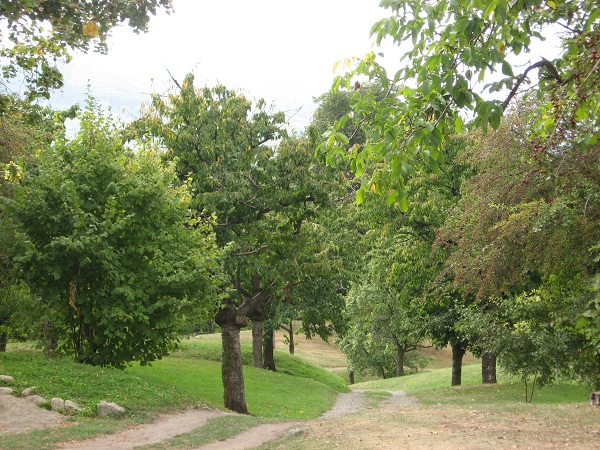 Way through the double moats

The Stapelburg was close to the border and part of the restricted zone during the time of the GDR and thus forbidden to visit. Of course, the castle declined further during that time. After the reunion, the ruins were repaired to prevent further decline, a well house and a cellar were reconstructed. There is a regular Mediaeval festival in the summer to garner some interest in the ruins. 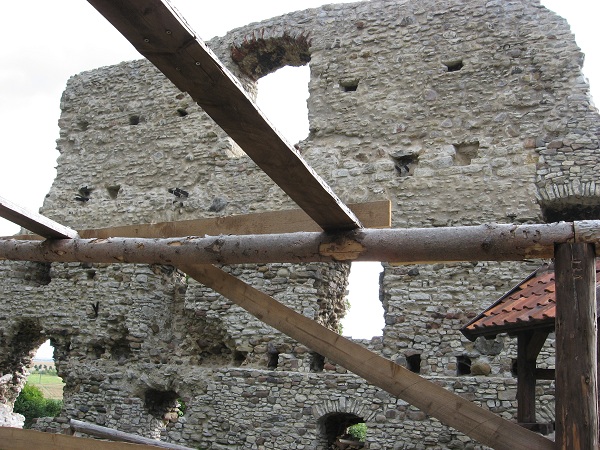 The palas with the stage in the foreground

There is a society who cares for the ruins, the Interessengemeinschaft Burgberg e.V. (which has a website with some historical information; another source can be found here).   ¶ October 26, 2020