6 Sept 2020
Death by Porridge – The Daneil Cave in the Harz: Legends and Geology
There are several large and a number of smaller caves in the Harz mountain range, from the dripstone caves in the karst area to those in the Buntsandstein layer in the northern Harz. One of the latter became famous for serving as abode to a gang of robbers in the late 16th century. The so-called Daneil's Cave lies in the Huy, a forested ridge between Quedlinburg and Halberstadt (today Saxony-Anhalt). And of course, legends developed around a historical kernel. The cave may have been a hermit's cell in the Middle Ages, and later it was used by brigands – legendary and real. 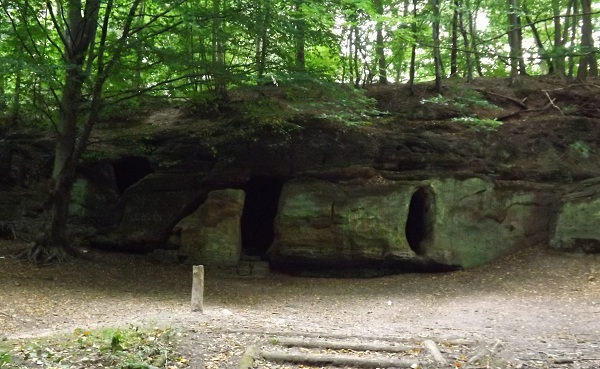 View to the Daneil's Cave

There once lived an evil brigand chief in a cave in the Huy. His men would put up wires with little bells across the paths that announced the arrival of an unfortunate merchant, journeyman or farmer, and sometimes a maid on her way to the market in Halberstadt. The robbers would then attack the unsuspecting victims, kill them and bury their bodies in the forest, and make away with their gold and goods back to the cave. The had put their horses's shoes on backside forward and thus deceived their pursuers. 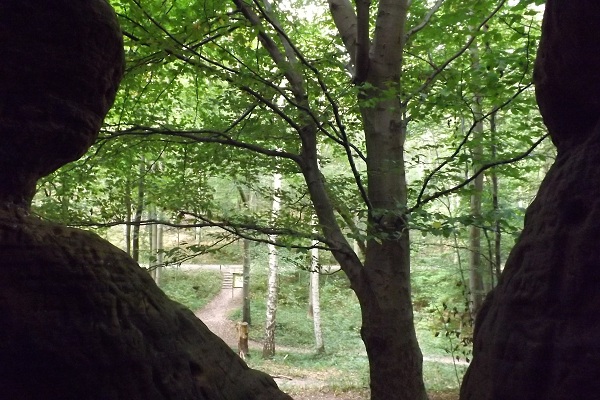 View out of the cave
One day a lovely maid names Susanne walked along the fateful path to the town to pay her father's tithes to the bishop in Halberstadt. The robbers caught her for the coin she carried, but when Daneil beheld her beauty, he forbade them to kill the girl and instead forced her to be his wife and swear a holy oath never to betray their secret cave.

So Susanne lived with Daneil and his men, cooked, washed and cleaned for them. She bore Daneil several children, but never saw them again; the cruel man did not want a baby's crying to betray their hideout. After a long while, Daneil allowed Susanne to go for walks in the forest around the cave, and it was then that she saw the wires and bells and witnessed the brigands killing a merchant, and she knew at what price the gold and gems were bought. 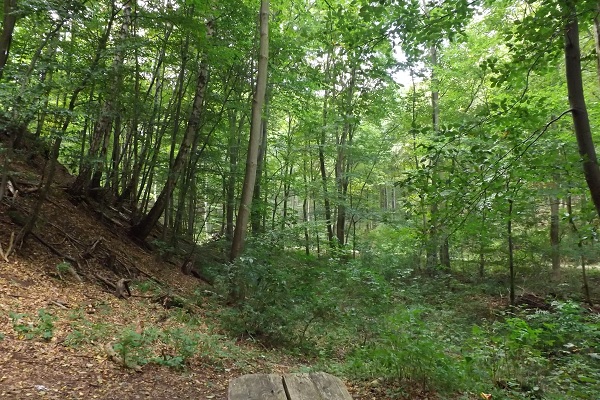 Beech forest surrounding the cave
Scared, Susanne ran through the forest all the way to Halberstadt, but she had sworn an holy oath and dared not confess to people what had happened to her. Instead, she sank on her knees in front of the stone statue of Roland, protector of justice, and told him everything. But a member of the town council stood near a window in the hall and heard tale. He called for a priest who absolved Susanne of her oath, so she could freely speak of her ordeals and the brigands' lair. 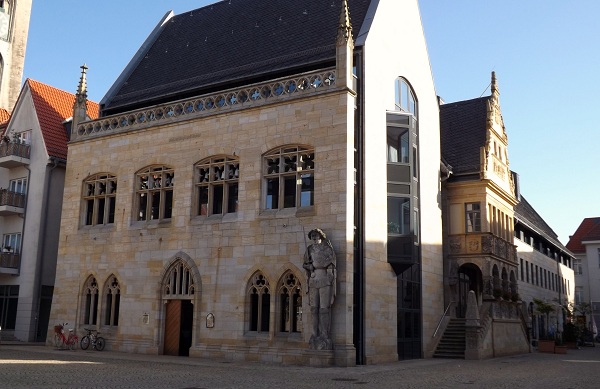 The Roland Statue at the Town Hall in Halberstadt
Erected in 1433, the statue symbolizes the rights of market, coin and toll which the town held since the 10th century, and free trade (Halberstadt became member of the Hanseatic League in 1367).

The next day, a detachment of soldiers was sent to the cave, but Daneil, alerted by Susanne's absence, had sealed the cave so well that the soldiers could not fight a way in. Then they called all the burghers of Halberstadt and the inhabitants of the surrounding villages to bring flour and heat large cauldrons of water.

The was a small hole in the roof of the cave, and people began to pour porridge into the opening. After a while the laughter of the bandits changed to cries of pain, and then everything fell silent. When the cave was opened, they found Daneil and his men suffocated by porridge. 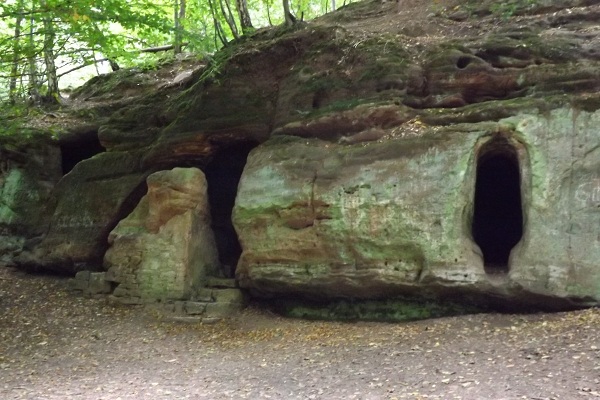 Daneil's Cave
The existence of Daneil is a legend and his end, while spectacular, not realistic, but the cave did serve as hideout for bandits at times.

One notorious fellow who spent some time in the cave was a man nicknamed Thousand Devil of Halberstadt (Tausendteufel von Halberstadt). He was finally captured in 1600 and brought before the bishop of Halberstadt and Duke Heinrich Julius of Braunschweig-Lüneburg. His real name was Simon Bingelhelm, and he and his men were responsible for a fair number of thefts from churches in Halberstadt, Quedlinburg and other towns, the arson of Drübeck Abbey, numerous murders and some rapes. Their activities stretched as far as Aschersleben and Salzwedel. 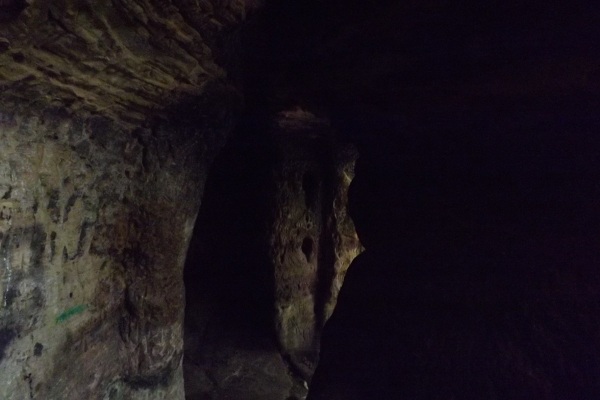 Passages in the cave
Simon was put to the torture and finally confessed to 71 crimes, some of which took place near the cave in the Huy. Most of them were actual crimes, but some ludicrous stories about stealing Christian children he then sold to a Jew (and killed in case the Jew wasn't interested) likely have been told under torture; they confirm the prejudices that Jews used Christian infants for nefarious purposes rather than presenting facts. There may be a tie-in with Susanne's disappearing or dead babies from the legend.

Simon was dragged to the court square by hooks and executed by quartering on June 2, 1600. 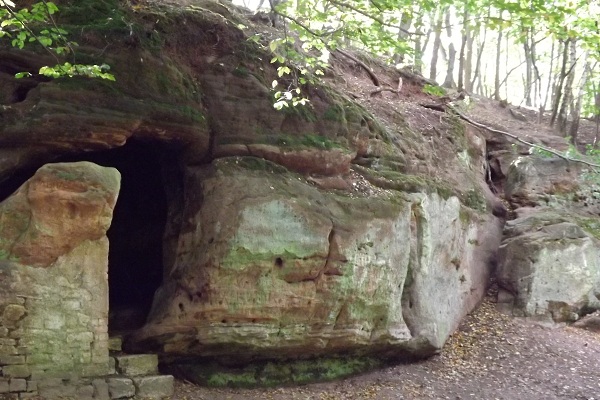 Entrance to the cave with hewn stones to the left
The cave has been washed out of a rock face of the Buntsandstein (another word English has pilfered from German; for geological details see below) during the Neogene or the Ice Ages. It consists of three connected chambers which have their own openings respective entrances. Traces like holes for beams, doorframes and wooden partitions are proof that the caves have indeed been inhabited and enlaregd by human hands. Today, the cave is classed as nature reserve. 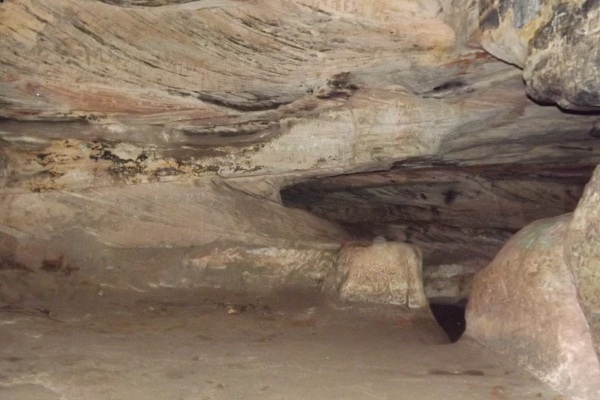 Interior of the cave with Buntsandstein layers
The Buntsandstein where the cave is located developed as sedimentary rock during the Lower Triassic about 252 to 247 million years ago.

Even further back, the tectonic movements had pushed the continents of Euramerica (Laurussia), Gondwana, and some smaller plates together into the supercontinent Pangaea. The last steps of that process happened in the early Devonian, ca. 420 -390 million years ago. Part of the process was the Variscan orogeny which formed a number of mountain systems in North America and Europe, including the mountain ranges for example in Pembroke, the Ardennes and the Bohemian massiv in the east – and those mountains know as the German mittelgebirge like the Black Forest, Taunus, the Rhine massif and the Harz. 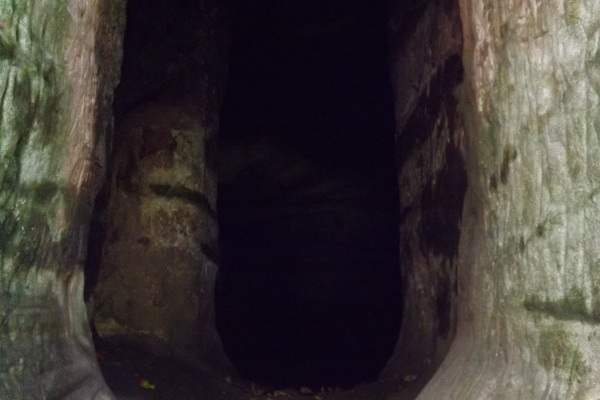 View into the cave
During the late Permian, the Zechstein Sea flooded what is now northern Germany – as well as lowland Britain, Denmark and northern Poland – as result of the melting of glaciers and polar ice caps (260 – 252 million years ago), but Pangaea still stuck together. Remains of the Zechstein Sea can be found in the Karst landscapes in the southern Harz.

By the time of the Lower Triassic, the Variscan mountain ranges had eroded, but they left kernels of old rocks behind (like the granite that later rose to the surface again in the Ilse's Rock, or the quartz veined granite of the Rosstrappe Cliffs and the greywacke in the lower layers in the Bode Valley; see this post). 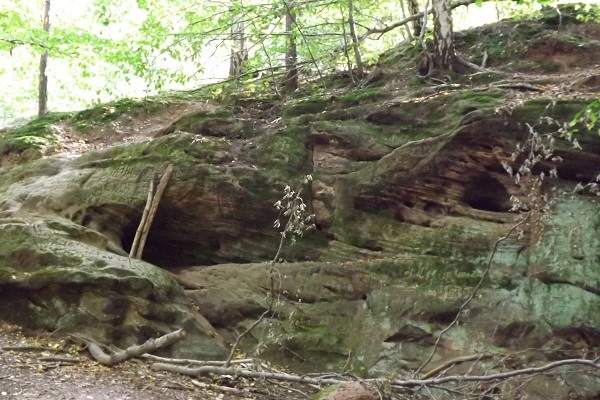 Buntsandstein layers near the cave
At the end of the Permian, the Paleo-Thetys Ocean broke through in what is now southern Poland and flooded the Germanic Basin in an alluvial fan formation. This happened several times through the next millions of years, so the clastic material settled down and solidified in layers. The overall climate was continental and therefore arid, so there was little erosion and chemical weathering, therefore the Buntsandstein developed in a rather pure variant with few inclusions. The Bunter than can be found in the respective geological strata in Britain developed the same way. 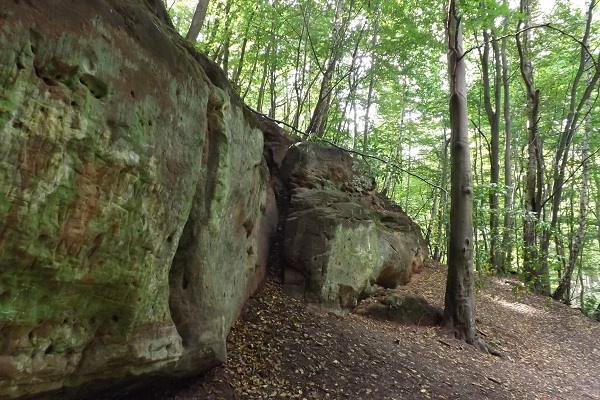 Outside wall of the cave
During the Middle Triassic, the global sea levels rose and a tropical sea now filled the Germanic Basin. It left behind a layer of musselkalk, the solidified version of reefs with chalcoid inhabitants like corals and mussels.

The Triassic is named for the three layers of different sedimentary rocks: Buntsandstein, musselkalk and Keuper, black shale mixed with dolostones that was deposed in the Upper / Late Triassic (237-200 million years ago). Pangaea broke up and the climate became more humid, with monsoon like rains, and the sedimentary rocks mirror that change. The rain and the development of rivers led to a larger erosion that also afflicted the Buntsandstein and musselkalk strata; a development that continued during the Jurassic and Cretaceous periods when the continents as we know them formed. 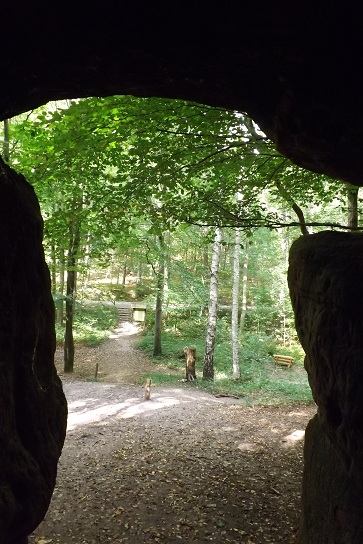 View out of the cave
During the Cretaceous (150-65 million years ago), the Harz began to rise again in what is called the Saxon Orogeny; a subdivision of the Alpine Orogeny. During the process, the Northern Harz Boundary Fault (Harznordrandverwerfung) developed. It forms the border between the Harz proper and the German Basin or Norddeutsche Tiefebene (a part of the older Germanic Basin). The Harz Block was thrust over the Triassic and Jurassic strata of the southern part of the basin and tilted those formations, while in the block itself granite and greywacke that even predate the Permian were uplifted. This process goes on today. 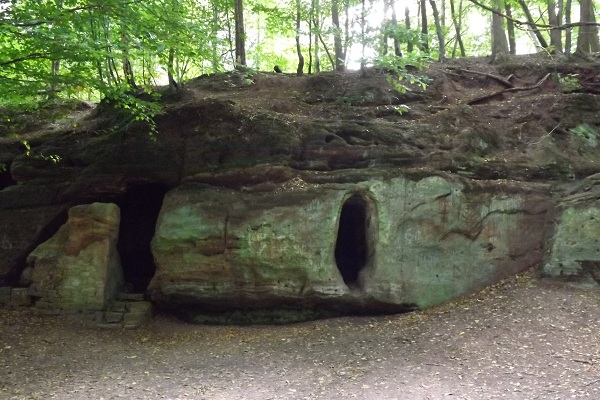 It is the geological reason for the Buntsandstein formations originating in the Germanic Basin that today can be found in the northern foothills of the Harz, including Daneil's Cave.