27 Sept 2014
Hobbit Dwellings, Brigands' Lairs, Glacier Mills and Other Fun
My father and I went to Halberstadt and surroundings for a few days to explore a bit more of the eastern Harz mountains and the lands around. Historically, this is the area where the Ottonian and Salian emperors had some of their ancestral lands, and spent a lot of time. Hiking around we came up with more fun than just old churches, though. 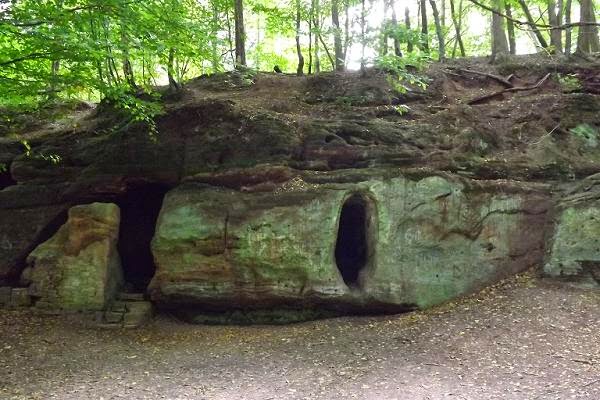 A Brigands' Lair - the Daneil Cave in the Huy Mountain

This cave can be found in the Huy mountain, a sandstone ridge now grown with beeches. There is a legend about an abducted maiden who was forced to work for a gang of evil robbers until she managed to escape, alert the village and give the guys their just dessert. The place has been lived in, maybe even by some unsavoury guys, but there are no documents about a veritable brigand gang harrassing the surroundings for years. 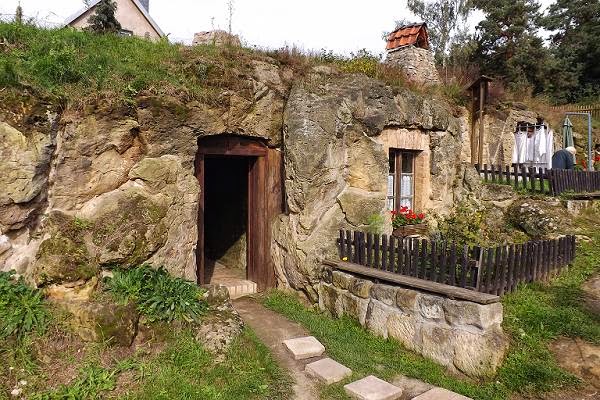 The cave houses in Langenstein
Here we got some 19th century Hobbit dwellings. *grin* They can be found in several places in the village of Langenstein. Some of these go back to the 12th century and were successively expanded. The last inhabitant left his cave in 1916. They were actually up to the living standard of the time, cool in summer and warm enough in winter thanks to ovens. The toilets were outside in the (in)famous plank huts. 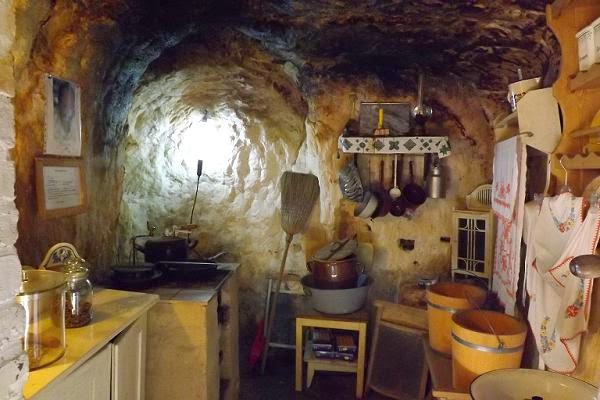 One of the houses, interior (the kitchen; important in a hobbit hole)
The caves are of varying size; the average is 30 square metres for a family, with a kitchen and larder, a living room, and sleeping quarters. The caves were not poor man's hovels, but respectable housings for the working class. Several of them have been lovingly restored and equipped with old-fashioned furniture. 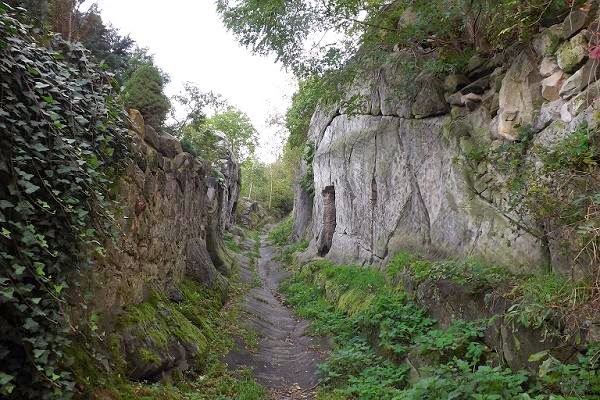 A very crazy way through sandstone cliffs
This crazy way leads through the red sandstone and musselkalk of the Huy mountain up to the remains of a castle. There are caves here, too, those dating back to the time of the Germanic tribes living here in pre-Roman times. They have been used until the 20th century, but they are larger and less comfortable, with no separate rooms. The last people to live there were some refugees from WW2 (until better places could be found for them). 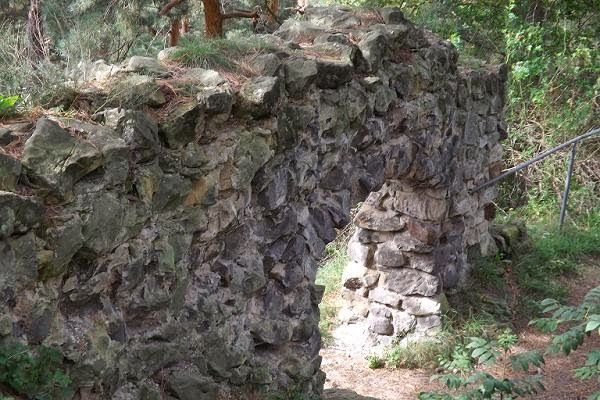 Remains of Castle Langenstein (pretty much all there is)
At the end of the crazy way are some bits of castle wall. Castle Langenstein was built by the bishop of Halberstadt in the 12th century and once was a large and imposing structure covering the entire plateau of the hill. It was destroyed during the thirty Years War and used as quarry afterwards. Today only a section of a wall with the window opening is left. But the view over the land all the way to Halberstadt is nice. 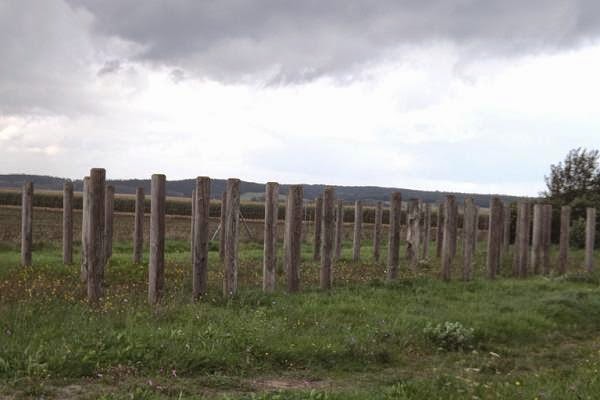 Outline of a prehistoric longhouse
These are the outlines of a longhouse from the early Bronze Age (2300 - 1800 BC) near Benzingerode. When the new interstate was built, lots of prehistoric finds came up that are now spread to several museums. The area is not so far from the place where the famous Nebra disc has been found - quite a busy place some 4000 years ago. There are several menhirs in the surrounding fields, but no longer accessible. Since people kept stomping over the fields with no regard for the corn, the farmers fenced them in. 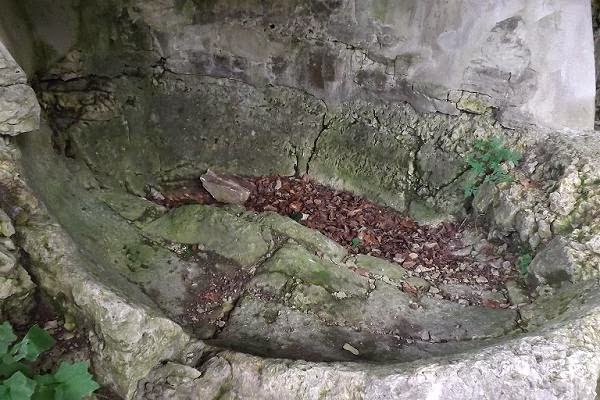 A glacier mill in the Huy Mountain
This bit of geological fun can be found in the Huy mountain ridge. Glacier mills are the result of cracks in the ground where glaciers slowly pushed forward. Melting water and small debris would run down those cracks and over time, carve canons, where the small stones washed out kettle shaped holes, the glacier mills. The mills in the Huy date back to the Saalian stage of the Ice Ages (352,000 - 130,000 years ago) and are the only ones to be found in Germany outside the Alps. 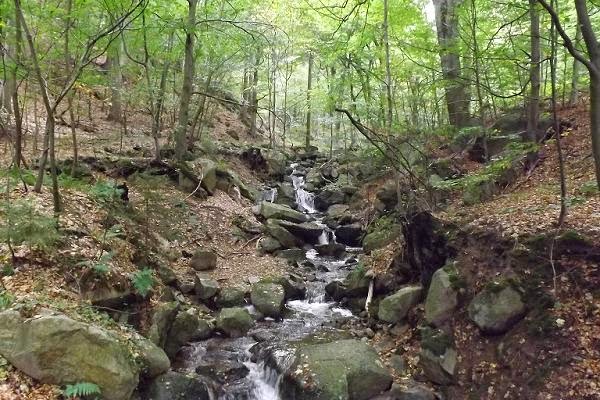 A river in the Harz
A typical Harz river, clear and cold, running over boulders.

Gee, I would love to dwell in one of the cave houses of Langenstein :-) You're right, perfect hobbit dwellings. Were you able to stand straight inside? They seem so very small.

Love the 'hobbit hole' pics. Imagine they would have been fine to live in at the time. The river is nice. Wish I was there...

Kasia, the ceiling height is about normal provided you're not a six feet something giant, and some of the rooms further back (sleeping alcoves, larders and such often have a lower ceiling).

Great! They really looks like a hobbit-hole. I have never heard of them.

Wish you a nice week-end!

Thank you, Meagwin. If you want a combination of hobbit holes and a castle, try the Regenstein (near Thale). I've been there a few years ago.