29 Oct 2017
American Trees and an Enchanted Rock - Some Hiking in the Harz
It's quite some time I last posted photos from the Harz mountain range, one of our favourite hiking areas. This time we took one of the walks in the Arboretum near Bad Grund. A rather North-American walk. *grin* It will also give you some pretty autumn pics. 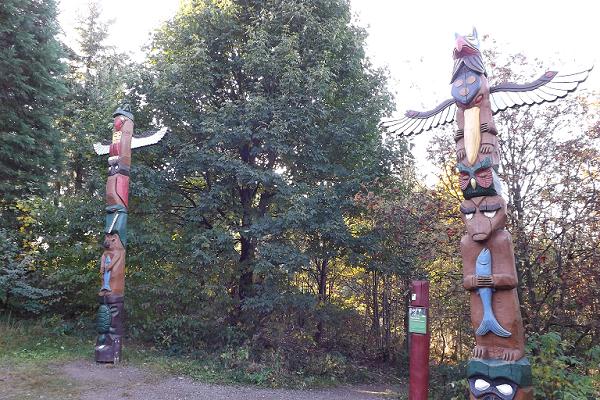 The arboretum, recently renamed Welt Wald (World Forest) was founded in 1975, so the trees are still comparably young. A storm had brought down some 20 hectares of spruce monoculture in November 1972, and the Lower Saxon Forestry Commission decided to use the space for a botanical garden to research how non-native trees would cope with the climate and to offer a recreational area for visitors to this part of the Harz. 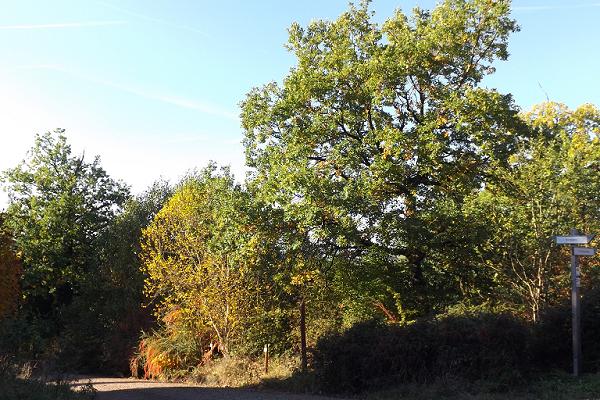 Trees in the afternoon sun
The park now encompasses 65 hectares, with more than 600 species of trees and shrubs from nothern America, Europe and Asia, including sequoia, hemlock, grand firs, incense cedars, tulip trees, and lots of other interesting species. They were planted according to the woodland communities they would form in their native countries and climatic regions. 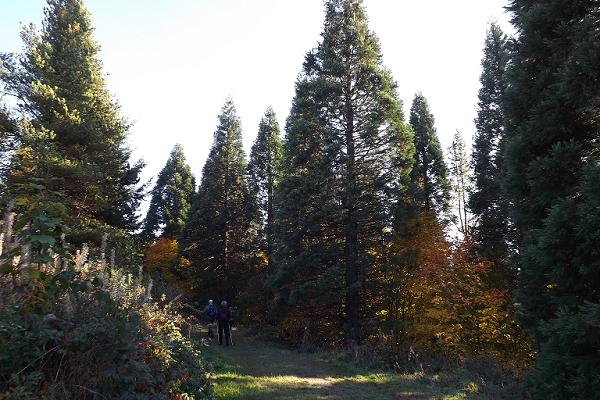 Hemlock and British Columbia fir
The trees are included in a long term monitoring and measurement scheme. One of the reasons it to test their suitability for further commercial use. Douglas firs, grand firs and Sitka spruce seem to thrive particularly well. 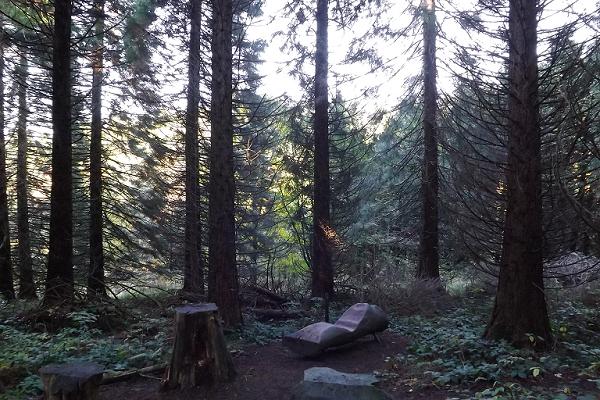 In the dark forest
We did the North-American walk, one among the several tours you can do in the park. It starts with the Pacific coast via southern Alaska to the Rocky Mountains. To add a bit fun for the kids, the walk featurs some extras like a watch tower, a pendant bridge and some hidden models of native animals. 'Spot the wolf' turned out to be quite popular. 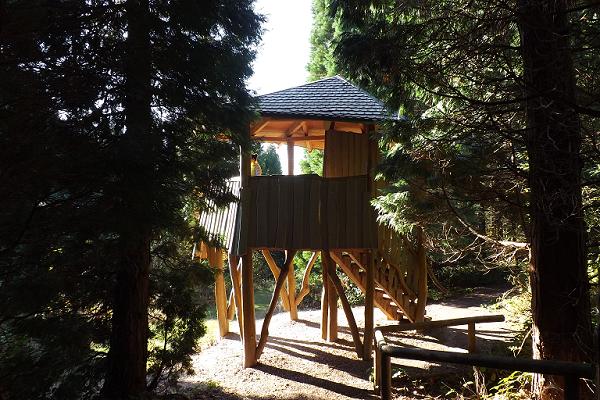 Watch tower
The tour starts with some giant sequoias - called mammoth trees in German - form the Sierra Nevada and the coastal mountains north of San Francisco, moves to southern Alaska with its lovely hemlock, Sitka spruces, coastal firs and cedars. Next step are the Rocky Mountains (featuring - among others - bull pines and lodgepole pines) and then the path winds back to the Sierra Nevada, planted with incense cedars, Colorado white fir, and redwood species. 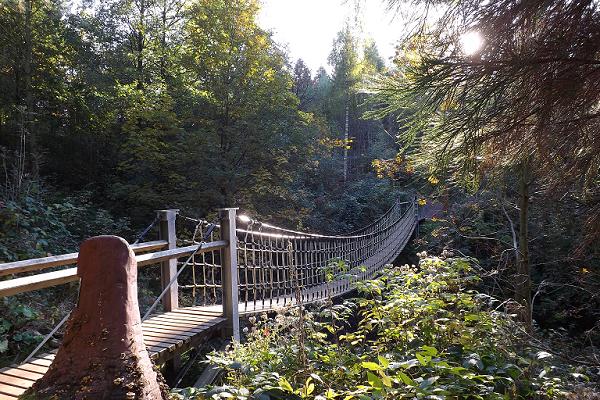 Pendant bridge
Geologically, the arboretum belongs to the upper Harz. Two geological zones meet here: The southern and western parts of the park consist of greywacke and slate from the Carboniferous period. The north-eastern area is part of the so called Iberg-complex, a limestone block which developed from coral reefs. The soils on top of the rock layers are base-poor and loamy. 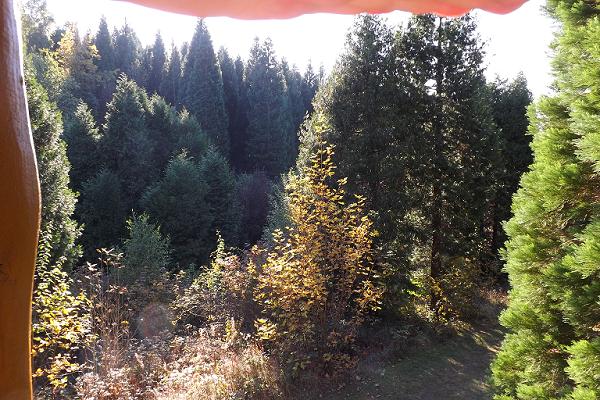 View from the watch tower
The park is situated between 305 to 448 metres above sea level, in the transition from submontane to montane zones. Its natural communities would be beech dominated mixed forest (which had partly been replaced by spruce monocultures in the 19th century, a step which is now often reversed). The average temperature is 7.5°C and the average annual precipitation 1,070 mm; the nutrient supply is moderate to failry good. Not a bad place for tress, overall. :-) 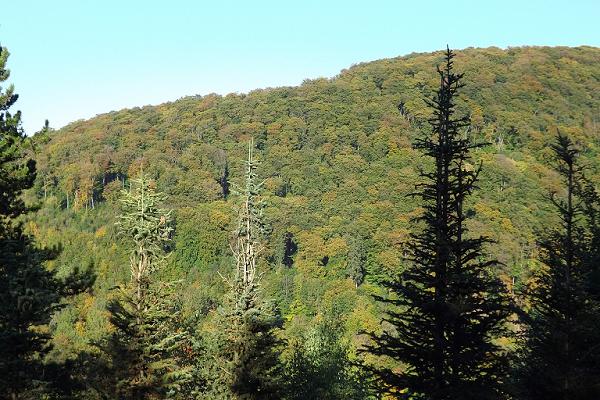 The surrounding Harz mountains
Not far from the arboretum lies a limestone rock formation called Hübichenstein. It was the seat of the dwarf king Hübich, a small man with long, unkempt hair and a beard down to his belly, lord over the dwarves and fairies. He was a kind man as long as you didn't intrude in his subterranean realm or damaged his favourite rock. He often helped the poor by dropping pine cones in their way; if they were good of heart, the cones would turn into silver when they picked them up. But those who tried to spy on his secrets he turned to stone. 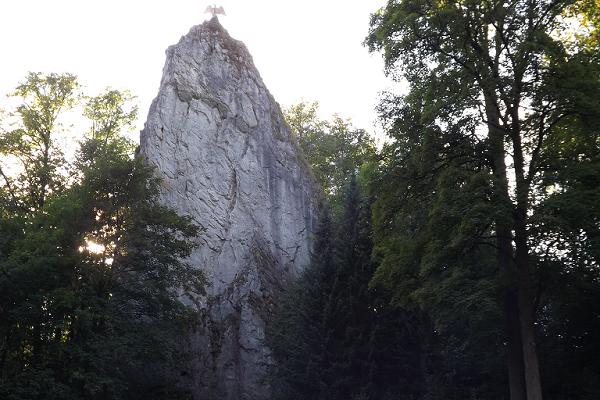 Hübichenstein
Some soldiers destroyed the peak of the limestone rock during one of the fights in the Thirty Years War, and Hübich was never seen again. A a momument dedicated to Emperor Wilhelm I was erected on the peak in the 19th century which was dismantled after WW1; only the bronze eagle remains. During the creation of the momument, rough steps were cut into the rock, so you can hike to the top. 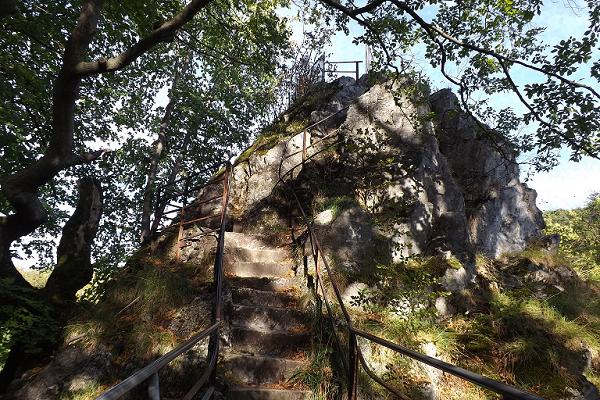 Upper part of the main peak
The rock has two pinnacles. I have mentioned the Iberg limestone complex above; the Hübichenstein is part of that one, the remains of a coral reef. Not far from the rock is the Iberg dripstone cave, one of several to be found in the limestone formations in the Harz. 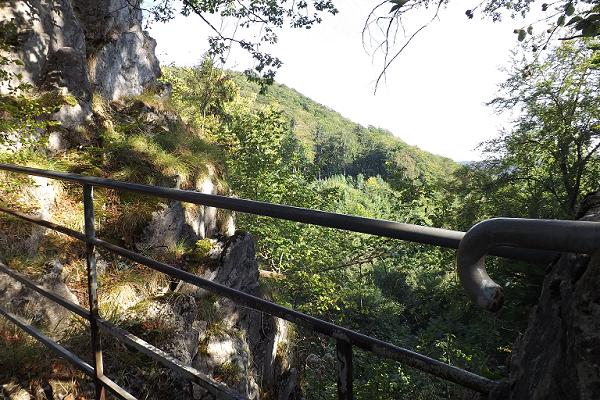 The way between the two peaks
I only went as far as the connection bridge between the two peaks - the higher one is 50 metres above ground. I'm not so good with heights and the steep slopes of that last part didn't look so enticing, not worth braving just to see a big fake eagle. That swaying pending bridge had been bad enough. 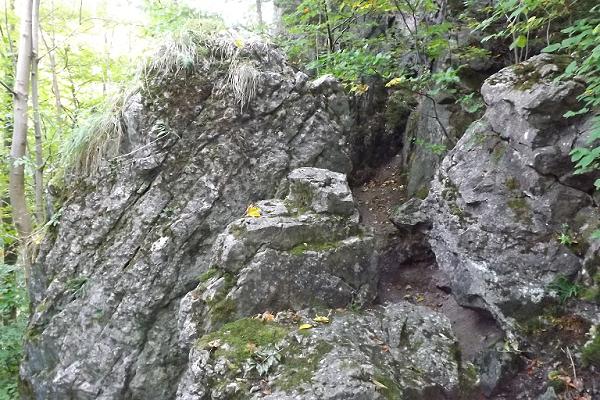 Detail shot of the limestone
On another note: I've decided to particiapte in the National Novel Writing Month again. Maybe I can manage to win that one for the 4th time in a row. 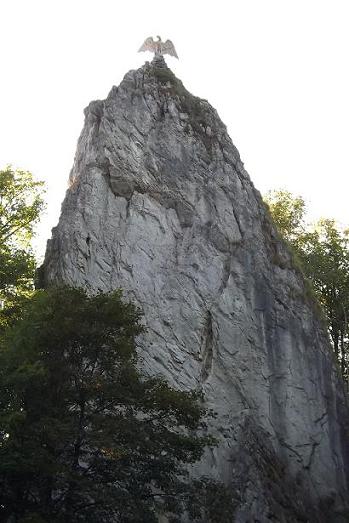 Another photo of the Hübichenstein
¶ October 29, 2017