13 Jul 2012
St.Petersburg - Impressions from the Neva River
A smaller ship like our cruise ship has a few advantages, among them the fact that the ship could get closer (in)to the towns than the big monsters that have to stay in the larger outer harbours. So she sailed up the Neva to anchor directly in town. That will make for a little series of photos. 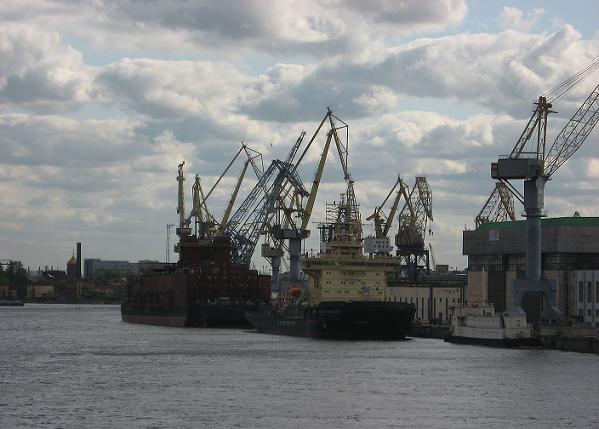 Cranes in the inner freight harbour
I took those photos when the ship left St.Petersburg - with an extra swing towards the first of the bridges that connects the Vasilyevsky Island with the mainland to the south. There had been a thunderstorm in the morning after a hot day before, and towards the evening, the clouds started to let up, though they still were pretty impressive. I liked the surrealistic look of the cranes against the sky. 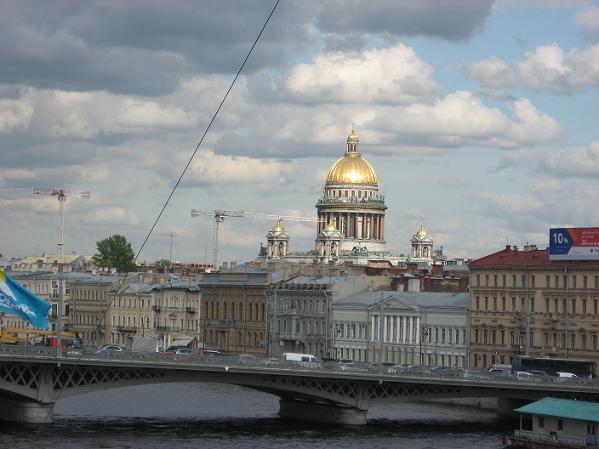 Annunciation Bridge, with St.Isaac's Cathedral in the background (mainland side)
Above is a view of the Blagoveshchensky Bridge (Annunciation Bridge, for those who don't want to get a knot in their tongue by pronouncing Russian, lol), the first of the bridges that span the Neva, coming from the direction of the Bay of Finland. The second bridge in the background is the Palace Bridge, and the golden cupola belongs to St.Isaac's Cathedral. 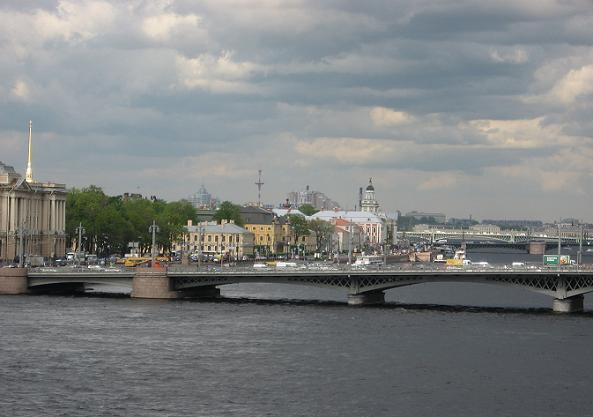 Annunciation Bridge, on the Vasilyevsky side
The Annunciation Bridge has been renovated in 2007 when it also got its current name; before it had been known as Lieutenant Schmidt Bridge. Both bridges are drawn up for some hours every night to let transport vessels pass; thus effectively cutting Vasilyevsky Island off the mainland. This can end in a not so nice surprise for those who missed the time to cross; they'll get stuck until about 5 o'clock in the morning. 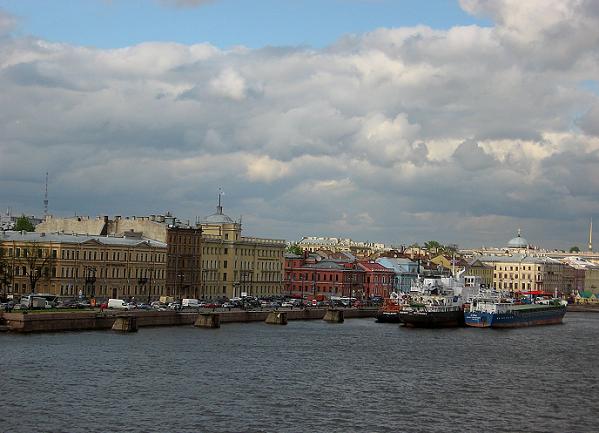 The Vasilyevsky side of the Neva
The southern embarkment of the river - on the Vasilyevsky side - has some of the oldest houses in St.Petersburg (early 18th century). The canals and streets on this part of the island show a regular, square pattern that indicates a town planned on the drawing board. 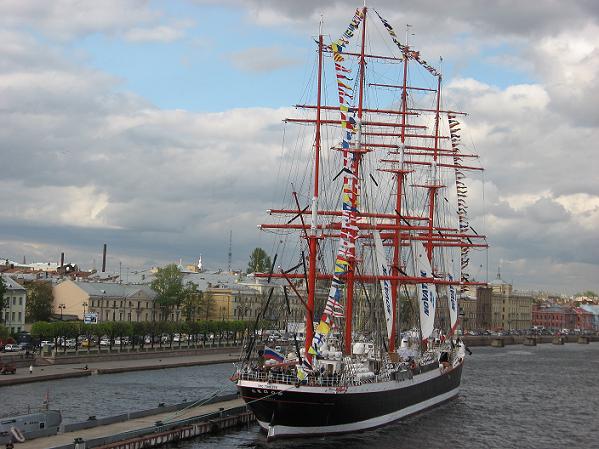 The four masted barque Sedov
Another pretty sight was the four-masted square rigged barque STS Sedov; a training ship for cadets of the Russian navy. She was just preparing for a voyage around the world and would leave two days later. 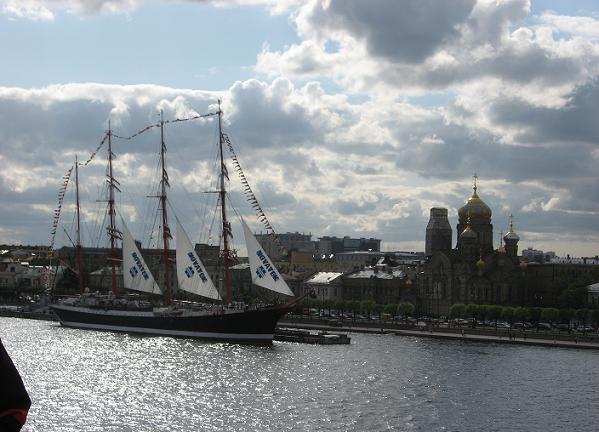 The Sedov against the Vasilyevsly skyline
The ship has an interesting history. She was built in Germany in 1921 as Magdalene Vinnen (later Kommodore Johnsen), a freight carrying sailing ship. After WW2 she came to Russia as war reparation and was renamed Sedov, after the Arctic explorer Georgy Sedov who had died on an expedition in 1914. She served as sail training vessel of the Soviet Navy until 1957, then she was used as an oceanographic research ship until 1966. In the following years, the old lady was only infrequently used until she got overhauled in 1981. 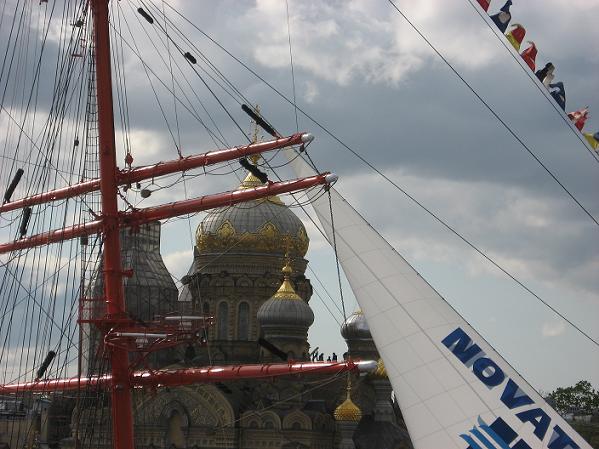 Mary's Annunciation Church on the Vasilyevsky side, seen thrugh the rigs of the Sedov
The Sedov participated in windjammer races during Soviet times and won a number of prices. After the independence of Latvia, she got transfered from Riga (her home since 1982) to Murmansk. 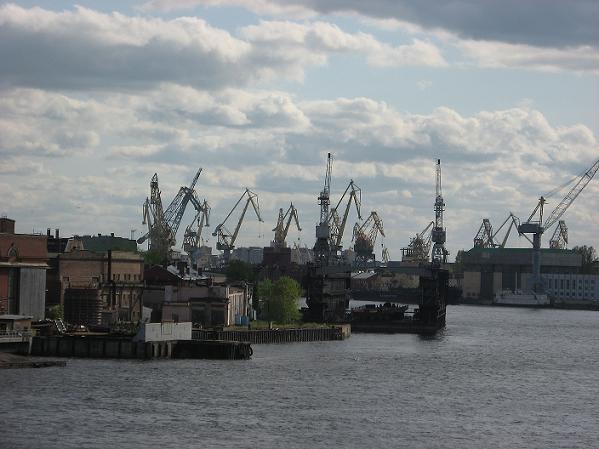 Cranes in the freight harbour
Let's come to some geological details: The Neva is only 74 km long, running from Lake Ladoga to the Gulf of Finland in the Baltic Sea, but its water discharge puts it at place three after the Volga and the Danube. The river is navigable throughout and part of the Volga-Baltic waterway which already the Vikings used. 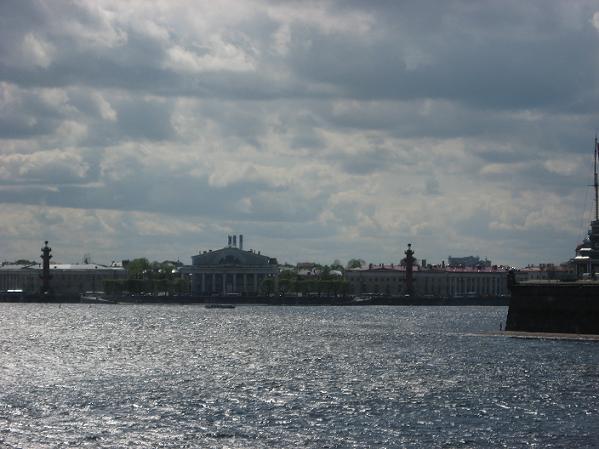 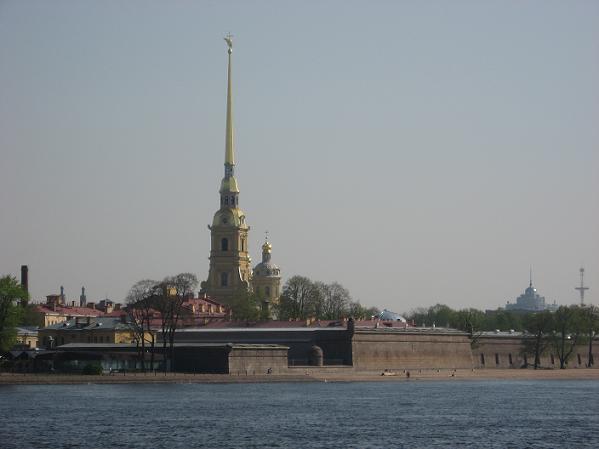 View from the Stock Exchange place to the Peter and Paul Fortress
The last steps in the formation of the river were the glaciers of the last Ice Age and their retreat which caused the Littorina Sea to form, 7-9 metres above present sea level. A wide strait between the delta and the future Lake Ladoga was covered by water. But the land around the lake rose faster and thus a closed reservoir developed (the race of seal particular to Lake Ladoga is a witness from that time). The rising level of the lake flooded a moraine ridge and ran into the valley at the Ivanovo rapids, the modern Neva with its tributaries Tosna and Mga formed about 2000 BC. The average decline of the river is 4.2 metres. 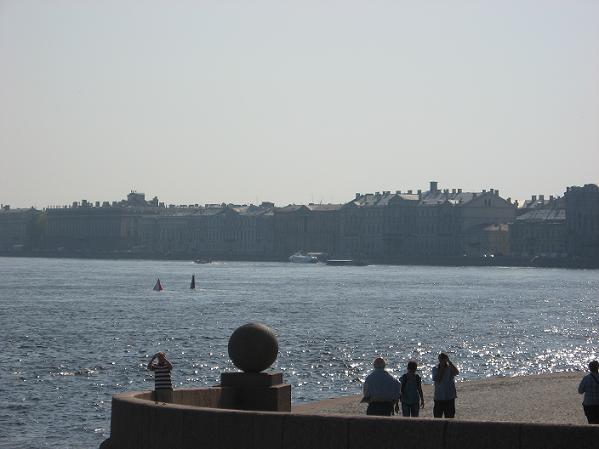 View from the Stock Exchange to the Palace Embankment
The development of St.Petersburg altered the hydrological network of the delta. The town was founded in 1703. The swampy terrain was not the best place to build a town, but Tsar Peter the Great wanted a Baltic Sea harbour. Tons of earth had to be moved which was used to raise the city; countless timber posts had to be dug into the ground, and canals had to be built for drainage. When the work was completed, the delta of the Neva consisted of 48 canals and rivers, and a hundred islands. Some of the canals were filled in over time so that today only 42 islands remain. A tour through the canals is one of the nicest ways to explore St.Petersburg. 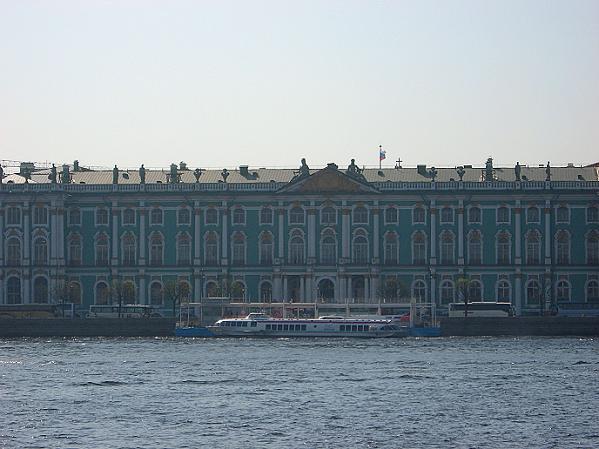 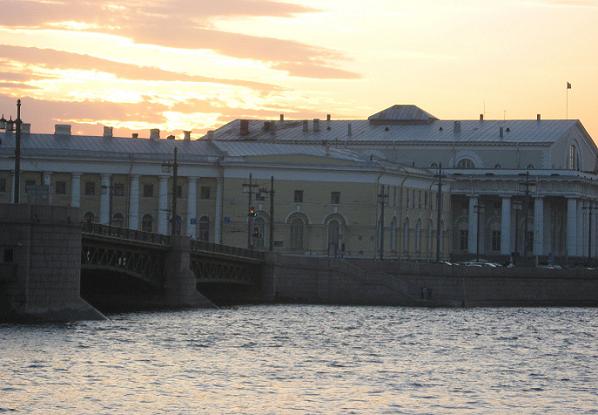 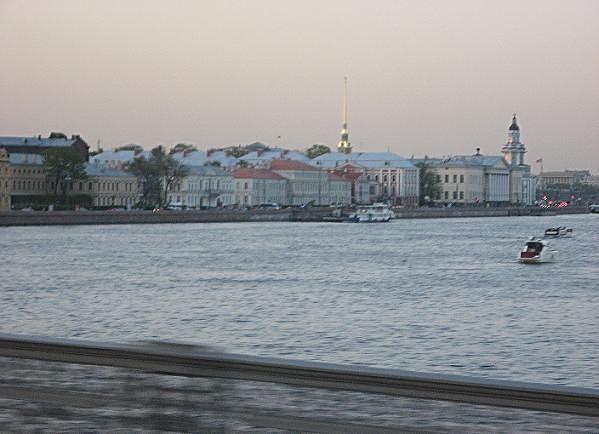 White nights at the Neva, with the golden spike of the Admirality in the background
St.Petersburg became the capital of the Russian Empire in 1712. It was renamed Leningrad after the revolution and suffered a devastating siege during WW2 which was only broken in January 1944. After the glasnost, it regained its old name St.Petersburg. But the white nights at the Neva never changed.   ¶ July 13, 2012