24 Feb 2006
Alien Architecture
This futuristic looking construction is called Josephskreuz (Joseph's Cross). It has nothing to do with the biblical character, but with one Joseph Count of Stolberg who in 1832 commissioned a tower to be built on the Auerberg near the town of Stolberg (Harz mountains). 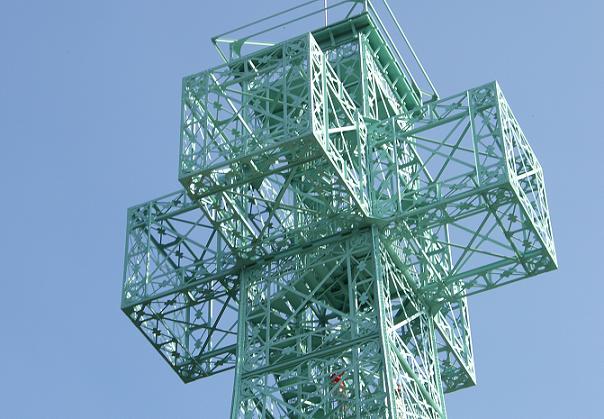 The famous Berlin architect Karl Friedrich Schinkel designed a wooden tower ending in a double-armed cross. It had no stairs but could be climbed by ladders. In 1880 the building was destroyed by lightning, and some 15 years later the ducal house of Stolberg and the Club of the Friends of the Harz shared in the costs of erecting a new tower. The double cross design of Schinkel was kept, but the material used was iron bars, imitating the Eiffel Tower. It weighs 125 tons. A staircase was built inside the construction, 200 stairs to climb the 38 metres high tower. After you've walked up the mountain for some three kilometres of winding pathes. :-)

My father visited the place as a boy, and back then the Josephskreuz had the same brownish iron colour as the Eiffel Tower. Since the Stolberg area was part of Eastern Germany, the tower wasn't kept up and had eventually be closed for visitors. It was renovated and reopened in 1990. Though I have no idea who is responsible for the weird green colour.