OK, let's skip the first definition (I've had PMS almost the entire week, I hope it counts as excuse) and concentrate on the second. I don't know how popular the Magdeburg hemispheres, the first device to demonstrate the existence of a vacuum, are in other countries, here every school kid has heard about them, though I suppose most would give you some variation of "äh, well, ahem ..." if questioned about the details. I admit, I had to look them up, too.

Otto von Guericke (1602-1686, more about him below) joined two copper hemispheres of 51 cm diameter - the juncture covered by leather soaked in wax and oil - and pumped the air out of the enclosure with a piston air pump he also invented. Then he harnessed a team of eight horses to each hemisphere and showed that they were not able to separate the hemispheres. When air was again let into the enclosure, they were easily separated. Guericke thus proved that substances were not pulled by a vacuum, but were pushed by the pressure of the surrounding fluids.

The experiment was first performed in Magdeburg in 1663, and repeated with a varying amount of horses in several other places in the following years (fe. at the court of Friedrich Wilhelm I of Brandenburg). 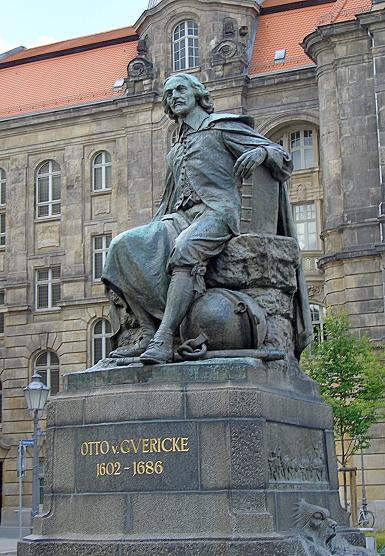 To the left is a picture of the Otto von Guericke monument in front of the Town Hall in Magdeburg. Guericke's life might be of some interest to Lisa Sergienko who writes about the Thirty Years War.

Guericke was born in 1602 in Magdeburg, and studied in Leipzig, Jean and Leiden between 1617-1624. Upon his return to Magdeburg he was elected member of the Town Council of Magdeburg as inspector of buildings. He married and had some children most of which died during infancy.

Since Magdeburg belonged to the Protestant League, Guericke experienced the sieges by the Imperial Catholic armies under Wallenstein 1629 and Tilly 1631 where he was taken prisoner when the town was stormed and plundered. Soon thereafter he worked as engineer in service of the (protestant) Swedish king Gustav Adolf. Unfortunately, the online biography provided by the Otto von Guericke Society Magdeburg doesn't specify how this change in fortune occured - I assume Guericke was fred after Gustav Adolf defeated Tilly in the battle at Breitenfels. Guericke was after all a man of some standing and might have been treated better than the average prisoner of war.

In 1632 Guericke was busy planning the rebuilding of Magdeburg and worked as fortification engineer. In 1642 he was elected as Treasurer and from that time on he undertook several diplomatic missions on behalf of Magdeburg. He also participated in the negotiations at Münster (Peace of Westphalia). In 1646 he was elected town major, an office he held until 1676 when bad health forced him to retire. He served Magdeburg through difficult times for fifty years as magistrate, major and ambassador.

Guericke started experimenting with the phenomenon of vacuum and began a lively correspondence with other scientists. In 1663 he began to demonstrate his vacuum hemispheres and published Experimenta Nova Magdeburgica de Vacuo Spatio. Those experiments are his most famous, but not the only ones, he also worked with electricity (that alas, is not specified on the website either* - I suppose those experiments were based upon magnetism which was known then). Sometimes he used his demonstations to gain the interest of important persons from whom he wants to obtain favours on behalf of his town.

In 1666 Otto Guericke and his family were promoted to the nobility by the Emperor Leopold II. retirement (at which point the von was added to his name). After resigning from his duties, Otto moved to Hamburg to live there with his son. In 1686 Otto von Guericke died there. His body was transfered to Magdeburg by ship and buried in the family vault in St. John's, with many of the church bells of the Old Town ringing him home.

* The society published some books though, where those things are probably treated in more detail.