24 Apr 2006
The legend of Alaric's burial
It all started with Jordanes who provides most of the literary evidence concerning the early history of the Goths. His De origine actibusque Getarum (551) is a Readers Digest version of the lost History by Cassiodorus (490-585).

Cassiodorus held several high offices under the reigns of Theoderic and Athalaric, the Ostrogoth rulers in Ravenna. I suppose he spoke the Gothic language. But scholars today question his claim that he based his history of the Goths on folk songs. More likely, he wanted to give the Gothic ruling class a glorious past matching that of Roman senatorial families. Cassiodorus probably used oral sources, but coming from a traditon of written sources, he might have known that he was putting the 'story' into History by merging these snippets into a coherent Whole.

It would not be the only time this happened. Geoffrey de Monmouth's Historia Regum Brittaniae does the same by connecting the House Plantagenet to King Arthur, to name just one example.

We don't know much about Jordanes, according to what he mentions in his Getica, he and his father held positions in the immediate surroundings of the leaders in the Alano-Ostrogothic tribal confederation in Moesia (Bulgaria) until Jordanes converted to the Catholic faith and took vows. His and his father's name sound more Alan than Gothic to me.

Thus, we have the condensed version of a history that had an agenda, both written some 140 years after the incidents. The main tone of the Getica is friendly to the Goths whom Jordanes as well as Cassiodorus interpret as having tried to find a peaceful integration into the Roman Empire.

This is what Jordanes says about Alaric's funeral:

His people mourned for him with the utmost affection. Then turning from its course the river Busentus near the city of Cosentia -- for this stream flows with its wholesome waters from the foot of a mountain near that city -- they led a band of captives into the midst of its bed to dig out a place for his grave. In the depths of this pit they buried Alaric, together with many treasures, and then turned the waters back into their channel. And that none might ever know the place, they put to death all the diggers. They bestowed the kingdom of the Visigoths on Athavulf his kinsman, a man of imposing beauty and great spirit; for though not tall of stature, he was distinguished for beauty of face and form.
(translated by Charles Gaius Mierow)

Cosenza (province Calabria, southern Italy) has an history of its own. It was the chief city of the ancient Brutii, conquered by the Romans in 204 BC. A castle built by Emperor Frederick II still dominates the old part of the city. 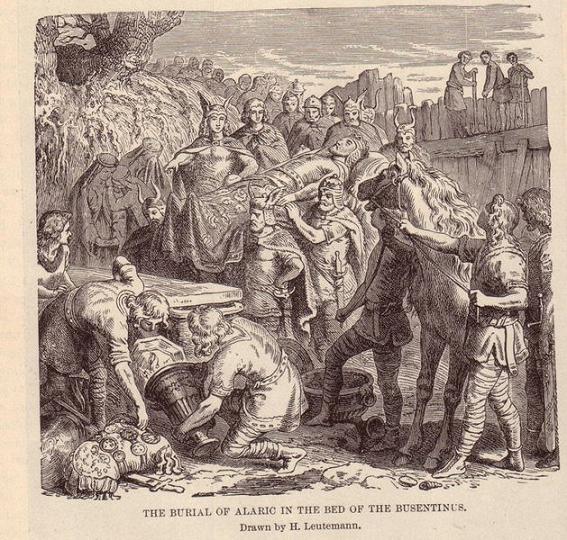 The ferocious character of the barbarians was displayed in the funeral of a hero whose valour and fortune they celebrated with mournful applause. By the labour of a captive multitude they forcibly diverted the course of the Busentinus, a small river that washes the walls of Consentia. The royal sepulchre, adorned with the splendid spoils and trophies of Rome, was constructed in the vacant bed; the waters were then restored to their natural channel; and the secret spot where the remains of Alaric had been deposited was for ever concealed by the inhuman massacre of the prisoners who had been employed to execute the work.

According to some information I found on an Italian website, the confluence of the rivers Busento and Crati, the long time prefered place of the burial, lie in plain sight of the town of Cosenza which encrouches up an hill. If the story about the killed prisoners is true, what then happened to the inhabitants of Cosenza?

The Busento is a fast flowing river; its valley near Cosenza rather broad and the ground sandy, framed by poplars and some olive trees. Further away from the town, before the Crati river joins the Busento, the valley is smaller and framed mostly by brushwood. Some websites claim Alaric's tomb ought to be in that part of the river, or in one of the adjoining hills. The hills makes for a better theory but it is strange that despite the efforts the rumours about the riches buried with Alaric have brought forth, no trace of the tomb has ever been found, be it underwater or in the hillocks in the area.

Cosenza has suffered from numerous earthquakes. Those may have destroyed any evidence for Alaric's tomb.

Besides Gibbon's account, a German poem furthered the fame of the King of the Goths and his secret burial place. August von Platen (1796-1835), Das Grab im Busento:

Those are the first verses which I below give in my own English translation.

Mournful songs in darkness whisper
Along Busento's rivershore,
And the river murmurs answer;
In its whirls the songs resound.

Along the river shadows wander,
Warriors of the Gothic tribes,
Mourning Alaric, their leader,
And their people's noblest dead.

All to soon and far from homeland
Did here they have to bury him
While still the golden locks of youth
Onto his shoulders graceful fell.

Von Platen probably based his work on Gibbon whose book was to be found in most educated German households at his time (it still is to be found in some, lol) and not Theodor Mommsen's editon of Jordanes which first appeared in 1854. It is interesting to note that he leaves out the pesky detail about the killed prisoners.

The 'far from homeland' is a nice way to put it, the Goths had been wandering around for several centuries at that point, and the 'golden locks of youth' are a romantic image of a man who was about forty at his death.

Von Platen's ballad was translated into Italian by Giosuè Carducci (1835 – 1907) and became pretty popular there.

August von Platen (his full name was Karl August Georg Maximilian Graf von Platen-Hallermünde) started out as officer and participated in the war against Napoleon in 1814/15. He realised he was homosexual, a fact that later should influence his poetry (maybe that's where the 'golden locks of youth' come from). In 1818 he began to study the law but soon changed to literature and learned the Persian language. His first poems were influenced by Persian poetry. In 1824 he visited Italy for the first time and wrote the Sonets from Venice; in 1826 he abandoned his former life and and lived in Italy until his death.

3 Apr 2006
Waterworks
Carla Nayland recently had some very interesting posts about Roman water infrastructure in Britain (part 1 and part 2). And today I watched a report on ORF (Austrian TV) about the Roman waterworks in Vindobona (Roman castellum and attached oppidum, now Vienna). They had some nice animations about aquaeduct construction, wells and pump systems, and the way lead was formed to pipes. What struck me as most interesting in the context of Carla's posts was a remark that the water transport in Vindobona was conducted underground because of the danger of frost. This would not be much of a problem in areas like southern France and Italy, known for some spectacular aquaeducts, but it could be a reason for the underground water systems at least in northern Britain - together with the fact that the territory wouldn't require large scale aquaeducts.

Considering the fact that underground pipe systems pose their own problems to get a balanced water pressure, aqueducts, though of simpler structure, could have been an option in some places in Britannia and in Vindobona (where water was led from a mountain well 30 kilometres away) thus I think the danger of frost was indeed a reason for the elaborate underground system. The pipes usually were put some 80 cm into the ground, that's below frost level.

Something that wasn't mentioned but struck me as interesting is the fact that even with the Danube literally running at the backdoor of the fort, the water wasn't taken from the river. The Danube was the outlet for the canalisation, though. I suppose the Romans had some ideas that it was better to keep the freshwater and canalisation systems separate. There was a neat animation of the complete water/latrine structure in the fort of Vindobona. In the 3rd century AD the fort was manned with 6000 soldiers plus auxiliary cavalry; the defense centre of the Noricum-Pannonian border and basis for the Danube fleet.
Read more! ¶ April 03, 2006 7 comments