6 Apr 2007
Some of Heinrich the Lion's Ancestors
You got the Edwards, I got the Heinrichs. *grin*

There's a tie in with my local history. The Abbey of Bursfelde was founded in 1093 as Benedictine monastery by Heinrich nicknamed 'the Fat' of Northeim. His father was Otto of Northeim, Duke of Bavaria, leader of the Saxon rebels against Emperor Heinrich IV (1050-1106; the one who had big troubles with Pope Gregor VII and whose name is best known in connection with the events taking place at Canossa 1077. 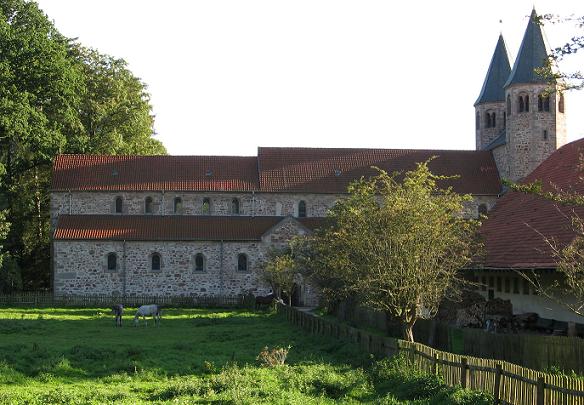 Bursfelde Abbey Church in the evening sun.
Saxony at that time encompassed an aera that roughly corresponds to todays counties of Lower Saxony, Saxony and Saxony-Anhalt. Heinrich the Lion extended Saxony to what is now the border to Poland in the 12th century. It was a checkerboard of feudal and allodial lands and complex loyalties.

Emperor Heinrich wanted to get more land for the Crown, Otto of Northeim (1020-1083) wanted to expand his possessions in the southern Harz area, which brought them into conflict, and since Otto was not the only Saxon noble who had problems with a king claiming lands and rights they were not willing to abandon, he soon found himself head of a rebellion - not against the institution of a King of Germany and Emperor of the Holy Roman Empire, but against the person of Heinrich IV. Otto lost a decisive battle, was captured and lost his possessions, was received back in the grace of the Emperor some years later and got his allodial Saxon lands back but not the dukedom of Bavaria, only to start another rising. Rinse and repeat until his death. 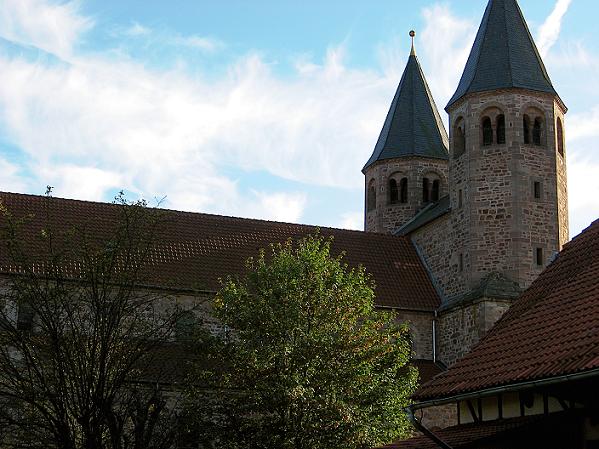 Closeup of the westwork of the Church
His son Heinrich inherited the family lands in 1083 and remained one of the most influential Saxon nobles. Among the lands and positions he held in different parts of Saxony (Northeim, Eichsfeld, lands around Braunschweig) were the positions of Protector of Helmarshausen and Bursfelde.

At first, Heinrich followed his father's politics and supported the counter-king Hermann von Salm against the Emperor, but in 1086 he decided to side with Heinrich IV, though I don't know what brought about this change. It did not get him the dukedom of Bavaria back, if that was his wish. 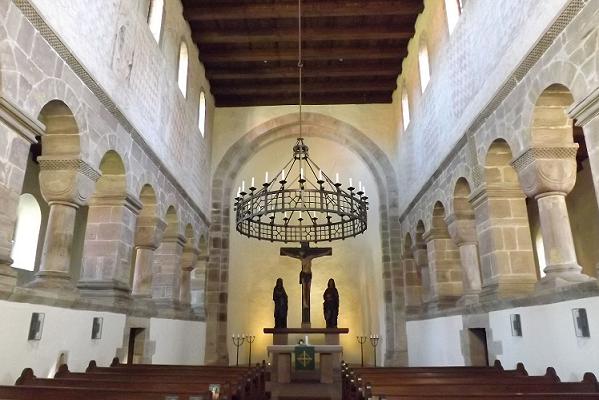 The eastern nave
He was married to Gertrud of Braunschweig and added more lands to his possessions. Gertrud was the sister of Ekbert II Margrave of Meißen and Friesland (two lands in different parts of Germany, Friesland is at the North Sea, Meißen at the Elbe near Dresden). He too, belonged to the rebels against the Emperor, and promptly lost Meißen when Heinrich IV got the upper hand. After Otto's death, Ekbert was one of the main leaders, forfeited his life and was assassinated in 1090. At that time, his son-in-law Heinrich already supported the Emperor.

Since Ekbert died without offspring, the county of Friesland fell to Gertrud, and Heinrich managed to coax the Emperor into granting the rights to him instead of the bishop Konrad of Utrecht who had ursurped (?) the fief. Turned out Heinrich had picked the right side in the Saxon Wars. *grin* 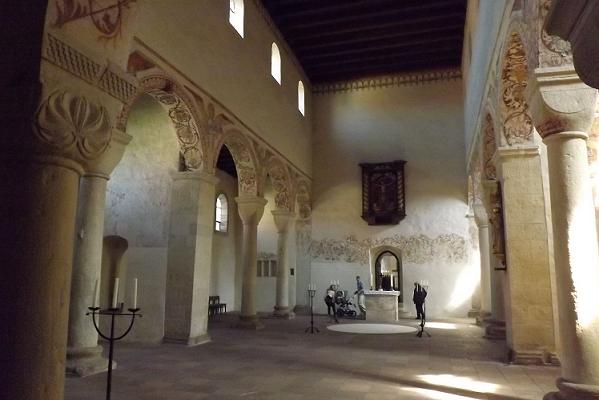 The western nave
The ministeriales (a special feudal group only found in Germany) of Utrecht, the Frisian sailors and merchants whose taxes Heinrich planned to reorganise, and the town of Staveren fearing the loss of its rights were not happy about the changes. It is said that they welcomed Heinrich and Gertrud friendly, but plotted behind their back. When open rebellion broke out almost upon his arrival, Heinrich fled onto the North Sea but was drowned by some sailors. His wife escaped with luck.

The exact date of Heinrich's death is not known, but he was entombed in Bursfelde Abbey April 10, 1101. I'd love to find out more details about that dramatic episode on sea. Original 12th century fresco inside the church: the Scourging of Jesus
Heinrich's and Gertrud's daughter Richenza of Northeim married Lothar of Süpplingenburg of the House Welfen (1075-1137), Emperor of the Holy Roman Empire since 1133. Their daughter Gertrud of Süpplingenburg married Duke Heinrich the Proud (1108-1139), also of the House Welfen. He was Duke of Saxony and of Bavaria, and thus that dukedom came back into the family some 150 years after Otto of Northeim had lost it.

The son of Heinrich the Pround and Gertrud of Süpplingenburg was Heinrich the Lion. He married Mathilde Plantagenet of England in second marriage; their son Otto (1175-1218) would become Emperor, though his reign was unfortunate and short.