30 Jun 2012
I'm Back Online
After a good deal of fiddling with cables - I'm not good at deciphering the odd glyphs that come with manuals these days - and trying to find the places where to type in the starter code and other information, both my computer and the laptop are back communicating with the net, and the phone works as well.

So I can go back to the usual work, but for now I'll leave you with some lovely pics of the Kiel Canal in the evening. 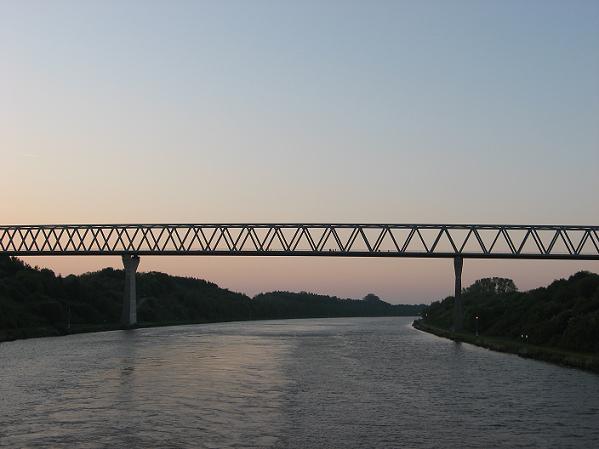 The Kiel Canal in the evening

It's way too hot here, and in the evenings we get the usual thunderstorms. This is going to develop into the typical German summer of heat, thunderstorms, rain, cool weather, hot again, thunderstorms ..... We've been through that the last two years as well. 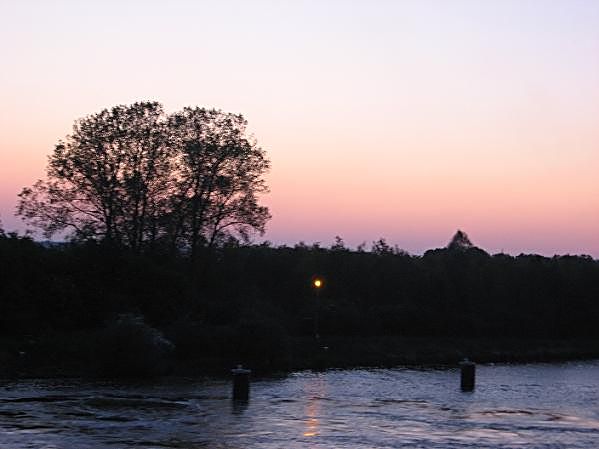 Another view past sunset
I'm hunting down some reliable information about the Kiel Canal for a post, since I have so many photos of that one - it takes about 8 hours to cross it and there were plenty of views - not to mention the lock at Kiel-Holtenau we passed on the way to the Baltic Sea in the morning after we'd been traveling through the canal during the night.

11 Jun 2012
Raised Bog in the Solling-Vogler Nature Park
The weather didn't play nice last week, raining on the Queen's jubilee and generally making a nuisance of itself. Though around here the trees and plants needed the water; it had been very dry. Still, it's a good reason to post some sunny photos. 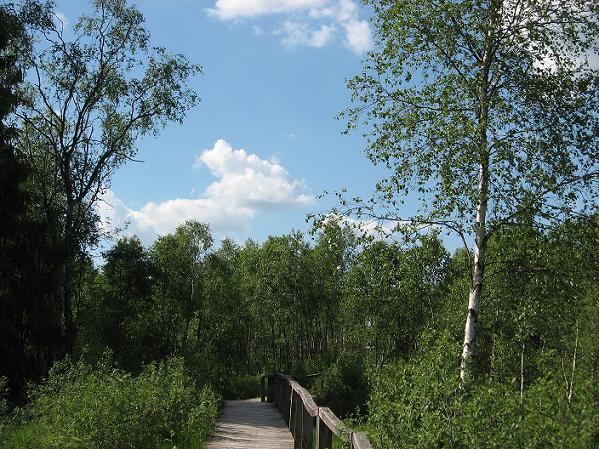 Timber trackway in the Mecklenbruch bog
I'm also pretty busy at work, and to delve into the photos of the places I visited during my last voyage and post about them will require lots of research about the Hansa League (last I dealt with that topic was in the 80ies), the Teutonic Knights and other subjects. I suppose there will be some older stuff first, like the Porta Nigra in Trier. 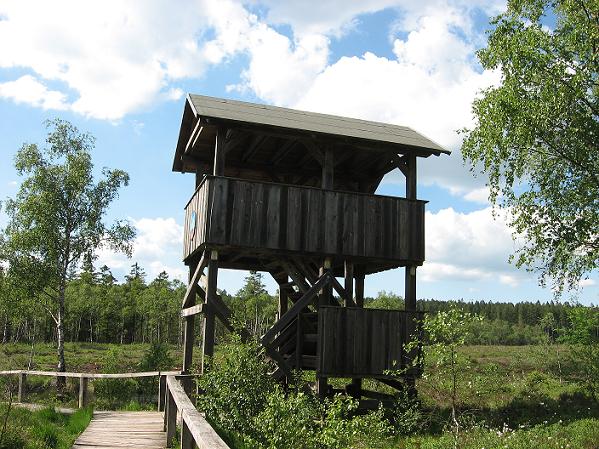 A tower for a better overview
But let's have a look at the place in the title of this post. The Solling-Vogler Nature Park lies to the north-west of Göttingen, stretching down to the Weser river. The other Nature / National Park I've been posting about several times, the Harz, is to the north-east. The mountains in the Solling are gentler than the highest Harz ones, but both landscapes belong to the German mittelgebirge (another word the English language snagged out of our pocket, it seems). 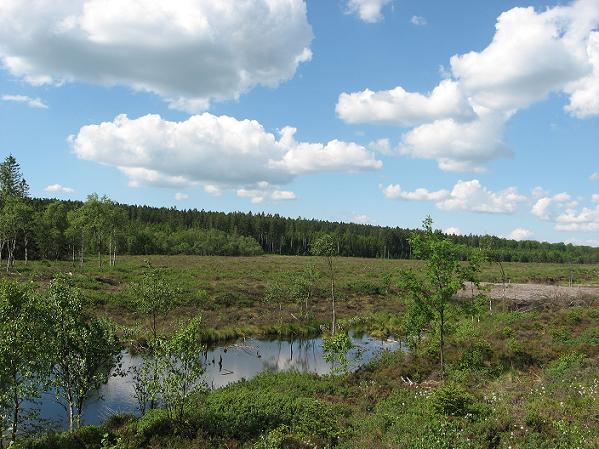 View from the tower over the bog
The Mecklenbruch bog encompasses 63 hectares; only a small part of it is accessible via the timber trackway, the rest is left free of any human influence. The bog was endangered like so many others (a lot of which have disappeared entirely during history) by drainage and adjacent tree farms, but a project to undo those human-made changes at its fringes is going on for some years now and the bog stands a good chance to survive. It is the home of a number of endangered flora (fe. sundew, a sort of cranberry - Vaccinium oxycoccus) and fauna (dragonflies). 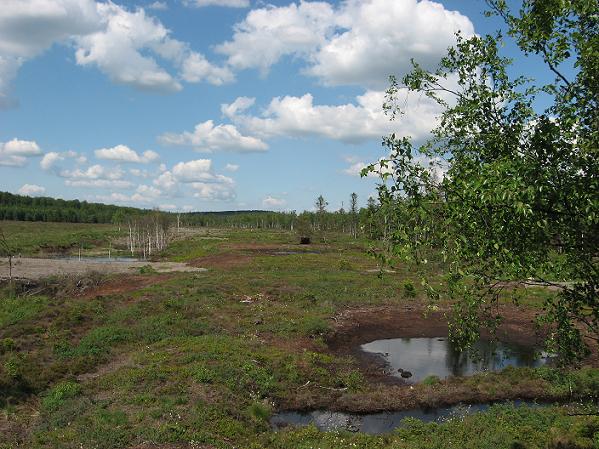 View from the tower, different angle
A raised bog needs a cool and wet (minimum of 800 mm rain per annum) climate to develop, because raised bogs don't have any contact to groundwater. The second requirement is an acidic substrate that's impermeable to water - in case of the Mecklenbruch that is provided by weathered loess. Raised bogs are also called ombrotrophic (rain-fed). It tiook 4500 years for a 5 metres high peat layer to develop under those conditions. 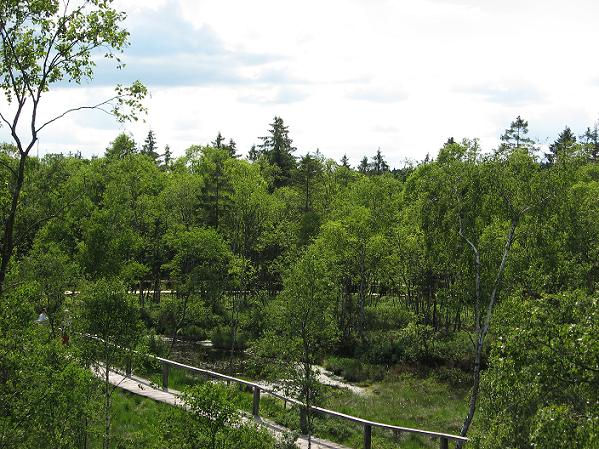 View to the trackway
And that's how it works. What started out as lake would over time turn into a marsh, then fen, carr (a peat or silt filled lake; see photo below) and eventually a bog. Sphagnum mosses will settle on the saturated ground; they can take up 20-30 times their own dry weight in water. While their lower part slowly decays and turns into peat, they grow in height, eventually raising the ground beyond groundwater level. At that point, we call it a raised bog. 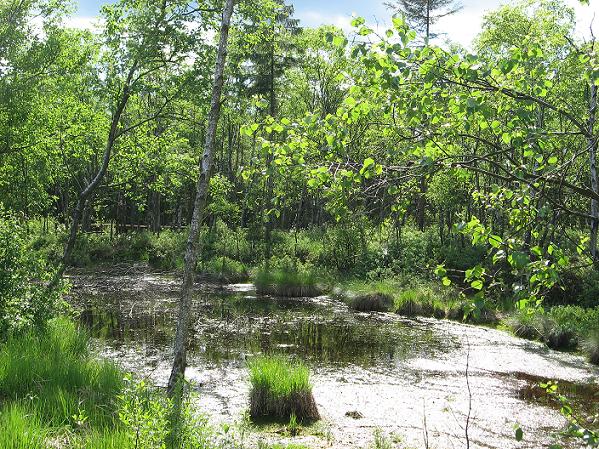 A carr in the Mecklenbruch bog
Thus the centre of an ombotrohpic bog is a treeless dome with true bog conditions, while on the outskirts there are strips of fen, carrs, and wetland vegetation (birches and shrubs). Those areas may be reached by groundwater. The trackway in the Mecklenburch bog leads through that sort of terrain for the most; the true bog can best be seen from the tower. 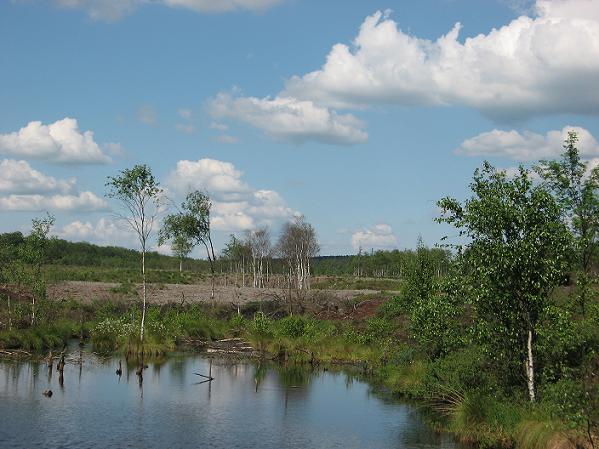 A little lake
There are similar raised bogs in the Harz, and most of those are not accessible to the public, either. The Harz had another problem that endangered the bogs: the waterworks needed for mountaineering (esp. silver). There is a whole system of artificial lakes that would provide water power to wash ore out of the stone. That system today is a Cultural Heritage; the Oderteich is part of it. 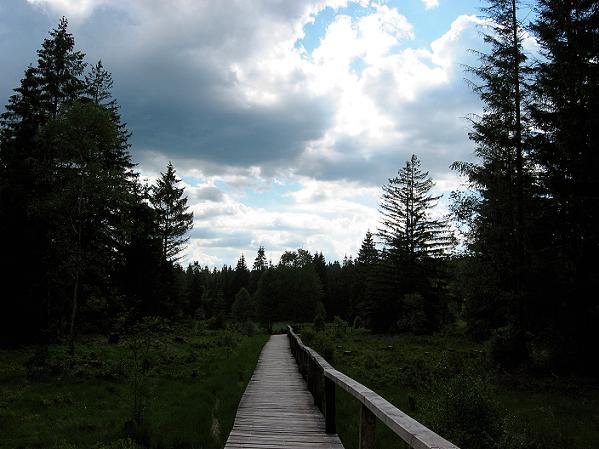 Some drama queen clouds
The clouds on the last photo looked very dramatic, but they didn't pose any real threat; the day remained fine and dry. I plan to go back there in autumn; I'm sure the bog will look even more atmospheric then - maybe with a bit of mist for a suitable ghost hour. :)