18 Aug 2012
Once Upon a Time - The Geology of the Curonian Spit
Once upon a time there were a fisherman and his wife who got a child late in life. Neringa they named their daughter, and she grew up big and strong. Indeed, so big and strong she was that the other children did not want to play with her, because she sometimes hurt them, She never wanted to hurt anyone, but she could not control her strength, and so she became a lonely child and sat at the shore for long times, watching the sea. She grew to a young maid, but still most villagers were wary of her because of her size and strength, and did not see her kindness and gentle heart.

So Neringa was a stranger in the village more than a member, and she watched people and often beheld the women cry when their husbands and sons did not return from their fishing tours. Then she saw the storms and high waves that capsized the boats and killed the men, and she decided to use her strength to help the villagers.

All night Neringa worked and carried sand in her apron, piling it up a few miles in front of the beach so that the storms and high waves would no longer threaten the boats of the fishermen. In the morning she had separated a safe and calm lagoon from the sea by a vast wall of sand. And the people in the village finally saw her kindness and were no longer afraid of her. 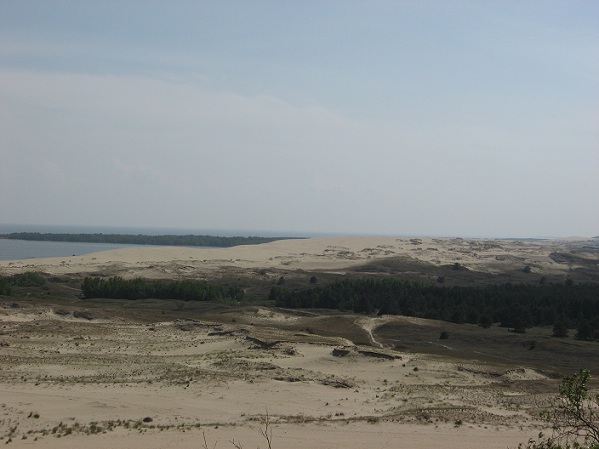 Another version includes the dragon Naglis who wanted to marry Neringa. When she refused him, he sent severe storms to destroy the villages, so she built the great dune to protect the villages from the dragon's wrath. 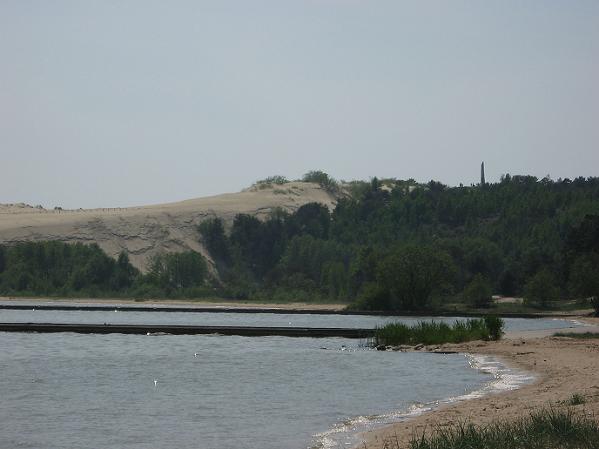 View of the Parnidis Dune from the lagoon side (in Nida)
The sandy peninsula Neringa created in one night is pretty impressive: 98 km in length and between 380 metres and 3.8 km wide, with the highest dunes up to 73 metres, separating a lagoon of 1,584 square kilometres.

This is the legend about the development of the Curonian Spit; the geographic facts are a bit more complicated, of course. But the name of the giantess, Neringa, still lives in the German (Kurische Nehrung) and Lithuanian (Kuršių nerija) words.

The basis of the Curonian Spit and lagoon is a 2000 metres thick crystalline sedimentary basin - the Baltic Syneclise - from the Paleozoic Era (542-251 million years ago), with additional formations from the Mesozoic Era (250-65 million years ago), and a layer of Pleistocene sediments that is 80-160 metres thick and consists mostly of the remains of glacier moraines from earlier ice ages. Its present look is a rather young development, going back to the last ice age (the Weichselian glaciation BC 115,000-11,700; also known as Würm in the Alpes, Devensian glaciation in the UK and Wisconsin glaciation in the US) and began about 16,000 years ago when the glaciers started to melt (yet again). 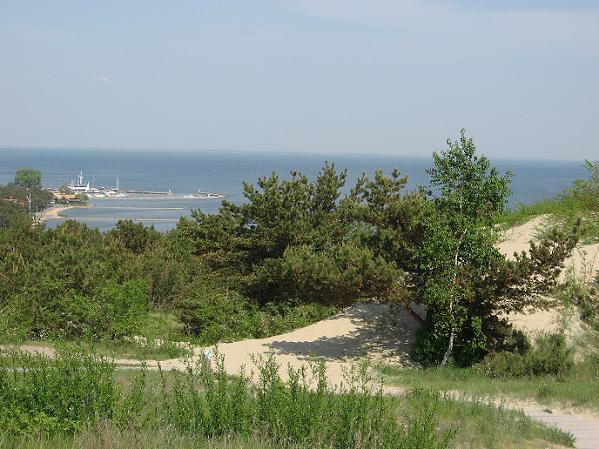 View from the dunes towards the harbour of Nida
The geological history of the spit is closely connected with that of the Baltic Sea. The development is somewhat complicated and parts of it are still discussed, but I'll try to walk you through. *grin*

The melting ice created a proglacial lake that 12,000 years ago covered most of the future Baltic Sea area (except for the Bothnian Bay between Sweden and Finland that was still covered by ice), framed in the north by the 2500 metres thick Scandinavian icesheet. Since the ocean level was 90 metres lower than today, there was a land connection between Sweden / Denmark / Germany, cutting the lake off. The level of the lake rose to 28 metres above sea level.

About 10,300 years ago, the melting glaciers caused the ice barrier between the proglacial lake and the sea - the land along lakes Mälaren, Vättern and Vänern in Middle Sweden - to break so that the lake drained to sea level (which at the time was still 65 metres below NNl).

The following influx of salt water led to a period called the Yoldia Sea (named for a marine bivalve - Yoldia arctica - living there), a brackish sea that lasted about 300 years. 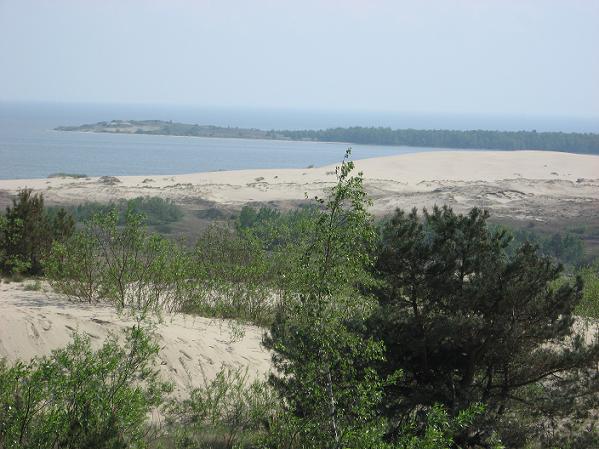 Parnidis Dune
The peninsula in the background belongs to the Kaliningrad Oblast (Russia)
But now the glacioisostatic rebound (also refered to as glacial isostatic adjunstment) of the land came into effect. That process was caused by the lessened pressure of the ice that had pushed the earth crust into the mantle; the mantle material now started to reflow under the crust. This rebound caused the land to lift and the connection between the North Sea and the Yoldia Sea closed again 9,500 years ago, creating the Ancylus Lake (named for a fresh water snail, Ancylus fluvialis). The deep water current that brought in the salt water was cut off and the Ancylus Lake became a fresh water lake supplied by meltwater from the glaciers.

The rising water again reached a 'weak spot', the Darss Threshold, and again the different levels of the ocean and the lake led to an influx of salt water. This period 8000 years ago is called the Littorina Sea (after the marine snail Littorina littorea). The islands of Denmark and the Belt / Kattegatt connection developed. At the time the water level was higher than today.

The post-glacial rebound continued (it still does, about 1 cm per year), and the connection between the Littorina Sea and the North Sea became smaller again, thus reducing the influx of salt water. The Baltic Sea still has a lower salinity level than the oceans. 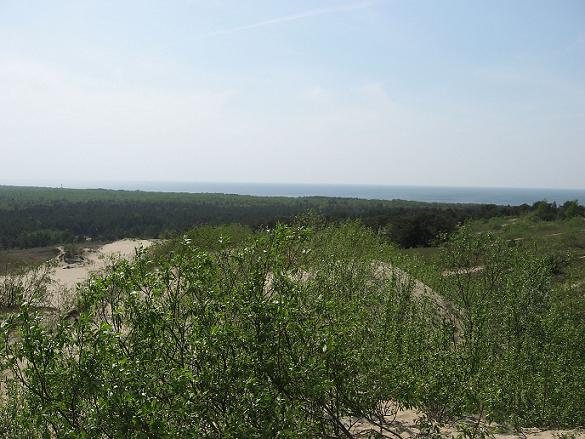 View across the spit towards the Baltic Sea
Now let's have a look how those transgressions and regressions of water influenced the development of the Curonian Spit: While the glacial isostatic adjustment leads to a rise of land in most places, it can also cause a depression in other places; a tilt that is usually going from north to south (fe. the rise of Scotland causes southern England to actually sink 0.5 cm every year). Such an connection also happened along the coast of the Baltic States where the rebound turned and led to a decline of coastal land in some parts during the time of the Yoldia Sea. That caused the river Nemunas (German Memel) in Lithuania to form a lagoon at its delta. During the following Ancylus Lake transgression, the middle river estuary was flooded and connected with the lagoon

* The balance of rise and decline in the area has shifted during the Littorina Sea-period. The north-eastern part of the lagoon (the former river delta around Klaipeda) continues to sink, while the middle and southern part, the spit proper and the area of the former bay in the Kaliningrad Oblast, rise. Geologically, those sit on the Fennoscandian Shield that continues to rise. The details of this and new GPS information are still discussed. 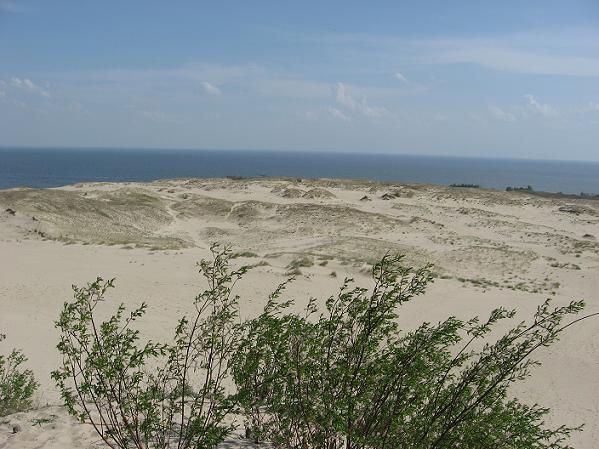 Lots of sand - The Parnidis Dune or Great Dune
The lagoon and a bay south-west of it were protected towards the sea be the remains of a moraine chain and the sediment outflow from the Nemunas river which began to form a peninsula. During the regression of the Littorina Sea, the spit developed its final form. Those particular circumstances led to a somewhat unusual spit since it lacks the typical 'hook end' formed by longshore drifts along a headland, but instead leaves only a small strait (300 m) between Klaipeda and the end point of the spit. The Vistula Spit at the coast of Poland has the same structure.

Bay and lagoon merged into the Curonian Lagoon. The entire process was completed about 4500 years ago. The continuing change of land in that area will eventually turn the already shallow lagoon (deepest part is 5 metres) into a coastal lowland.

Aerial and marine erosion turned the gravely facies of the moraines into sandy shores that frame the spit. And currents and erosion continue to change the shape of the spit. The inshore area at the Baltic side is rather flat, and the longshore drift causes sediment transport that increases towards the north, while the coast in the south is eroded. In the lagoon, the Nemunas river delivers an influx of sediment. 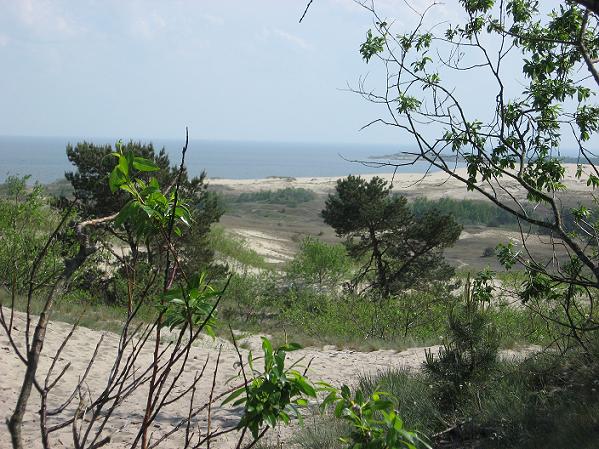 Another view of the dunes
I don't know what Neringa did to prevent the sand from developing into migrating dunes, but nature managed to grow shrubs and trees - mostly pines and birches - that thrive on a ground low in nutrients. Nevertheless, there is a lot of sand on the Curonian Spit and deforestation in the 18th century made things worse. The migrating dunes at Nida are an impressive example - they buried several villages. Dunes are flat on the wind side and much higher and steeper (30-35°) on the leeside, which means the biggest ones can be found on the lagoon side of the spit.

Today there is a program to restore the vegetation, and the bus tour from Klaipeda to Nida took us through some lovely pine forests. 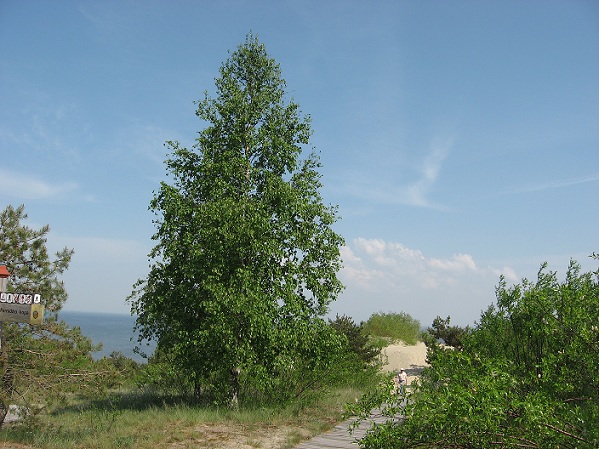 Sorry, I got carried on a bit here, but that geological stuff is too much fun. I'm afraid it won't be the last post about glaciers, rocks, and how those cool looking landscapes I've visited came about. *grin*