29 Sept 2012
In the Land of Saale and Unstrut
We followed some stations on the Romanesque Road in southern Saxony-Anhalt, and kept running into castles. Like this one we saw from the breakfast room in our hotel - what a nice view to wake up to. 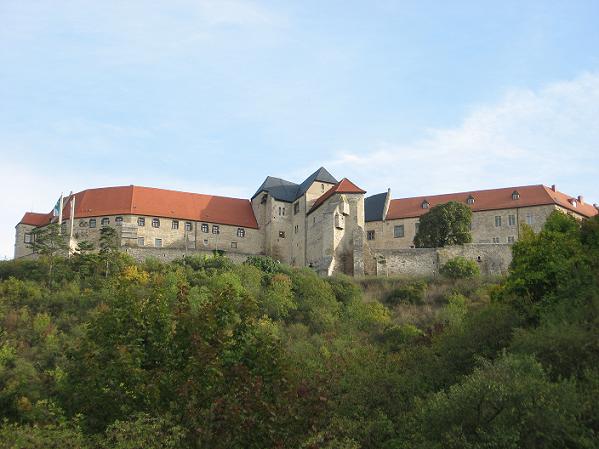 The Neuenburg was founded in 1090 by Ludwig the Leaper who also built the Wartburg. The castle was extended in the 12th century and its most beautiful features date from that time, like the chapel. It also got several towers, halls, walls and gates to turn it into the big boy you can see today. 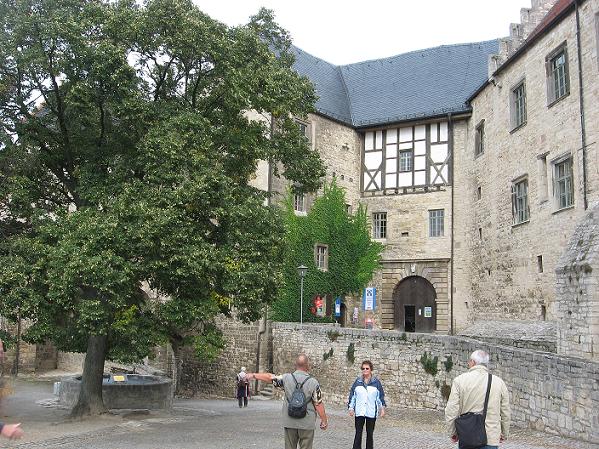 Neuenburg, outer bailey (Vorburg)
After the Ludowing landgraves died out, the castle fell to the margraves of Meissen of the House Wettin, who further altered the castle - it proabably needed even bigger walls. In the 17th century the Neuenburg came into possession of the prince electors of Saxony who used it as hunting lodge and added some Baroque frills. Like many castles in the former GDR, it didn't fare too well, but was renovated after the reunion.. 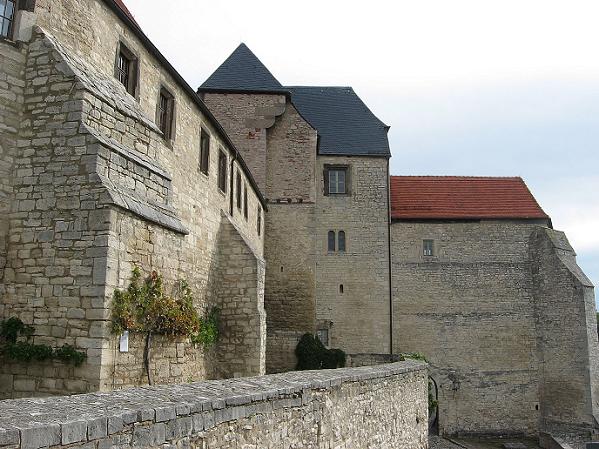 View from the outer curtain wall to one of the palas buildings
"At the bright shores of the Saale
Castles standing proud and keen;
Their fair walls are partly fallen
And the wind blows through the hallways
Clouds are drifting overhead."

Thus goes an old folksong, and it certainly fits the twin castles of Rudelsburg and Saaleck. And the wind did indeed blow through the halls the day we went there. 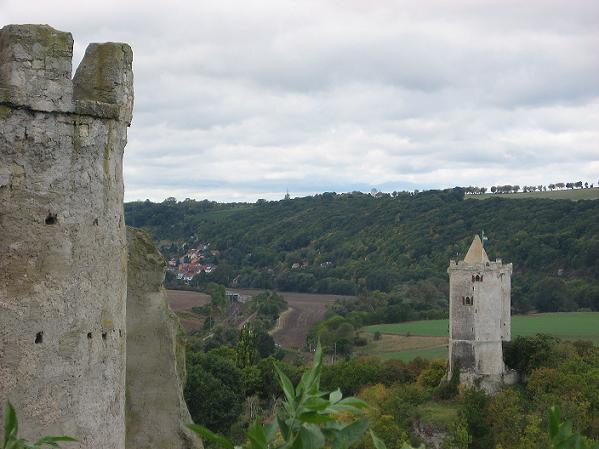 North tower of the Rudelsburg in the foreground,
west tower of Castle Saaleck in the background
The Rudelsburg was built in 1050 to protect a local border, and expanded in 1150. It changed possession a few times and ended up as ruin, like Castle Saaleck, though the palas houses a restaurant today. 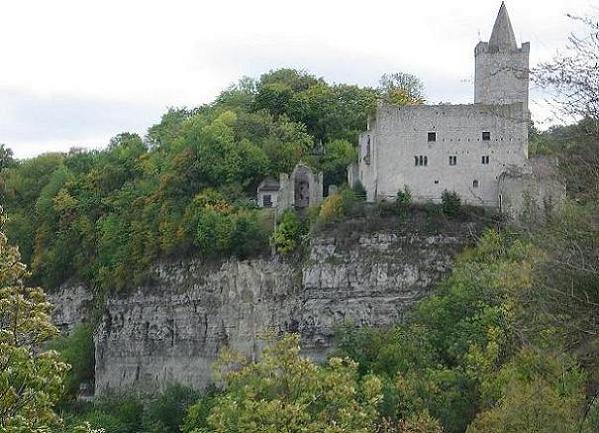 Rudelsburg, seen from Castle Saaleck
Castle Saaleck is first mentioned in 1140 and was for some time in the possession of the bishops of Naumburg. It fared worse than its neighbour and today only the two - partly reconstruced - towers and bits of the curtain walls remain. 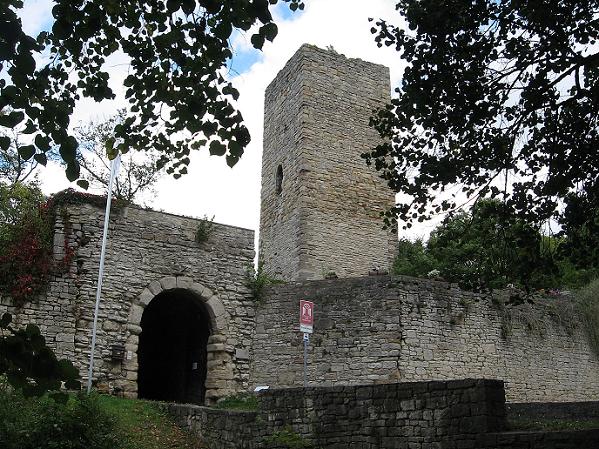 Eckardsburg
This one is the main seat of the Eckardsberga marshals of the Ebersburg in the Harz who we already met. The castle was a possession of the landgraves of Thuringia and is another one that retains some Romanesque architectural features. The landgraves visited the castle a few times, so it played a role in history. 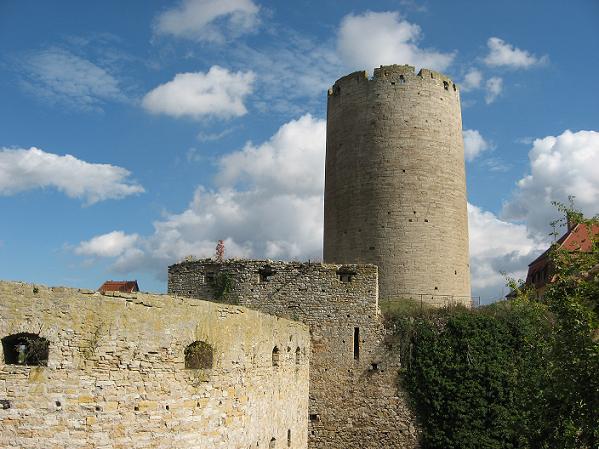 Querfurt Castle, with the tower Dicker Heinrich (Fat Henry)
Now we get to a real whopper. Querfurt Castle is seven times the size of the Wartburg. Parts of the inner curtain wall and the cellar of the Granary (Kornhaus) date to the 10th century, the two towers are from the 12th (Fat Henry) and 13th centuries (Torture Tower - though it actually was a keep and not a prison). Another tower and the outer curtain walls were added in the 14th century, the bastions in the 15th. 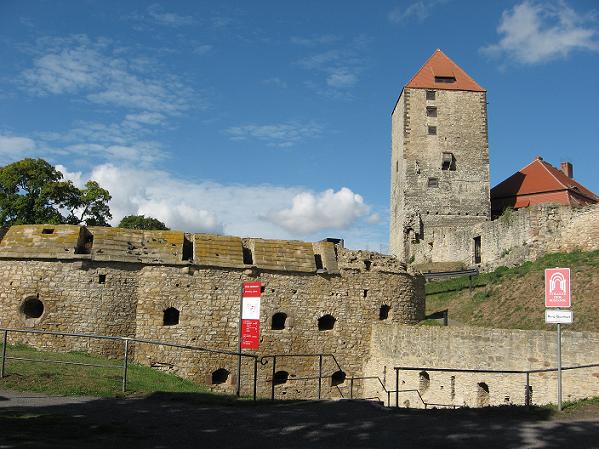 15th century bastion, southern gate and the 13th century Marterturm (Torture Tower)
The castle was the seat of the Noble Lords of Querfurt. The family rose to prominence a few times, most notably with Brun of Querfurt who became a martyr in the late 10th century, and Konrad of Querfurt, Bishop of Hildesheim and Würzburg and chancellor of the Emperor Heinrich VI. 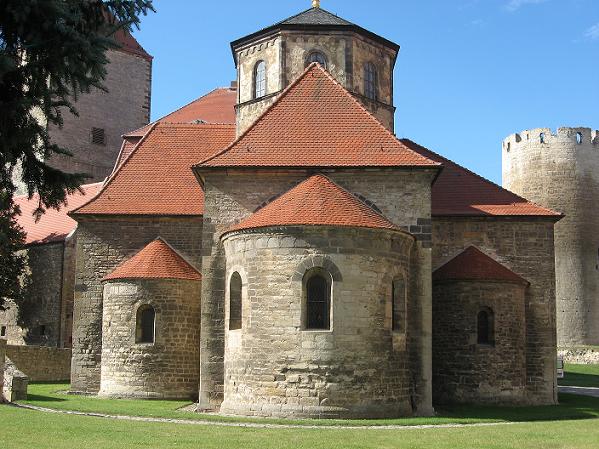 The Romanesque chapel (with the Torture Tower to the left and Fat Henry to the right)
A jewel on the Romanesque Road is the monastery of Memleben. Albeit only ruins remain, it is indeed a pretty place to visit, especially in sunshine. There most likely was a palatine seat during Ottonian times since both King Heinrich I and Emperor Otto the Great died in Memleben, but no traces have yet been found. Though it's not easy to catch those early places because most of it was built of timber. There was a large church in the 10th century of which only a few bits of wall remain. 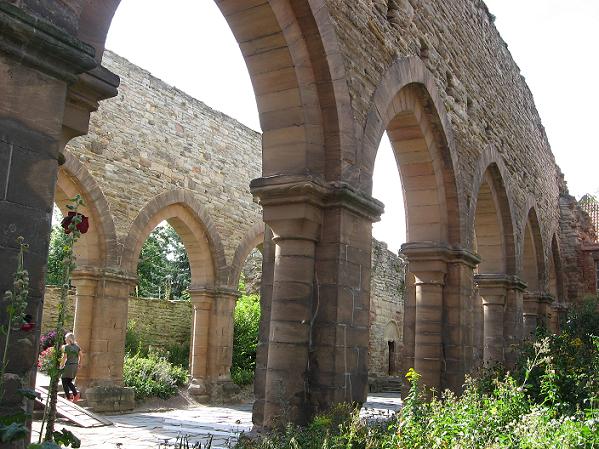 Memleben, remains of the main nave of the 13th century church
The other and somewhat better preserved Romanesque church dates to the 13th century. It fell into decline after the Reformation but the remains still give an impression of the former beauty of the church. The crypt has also been preserved. 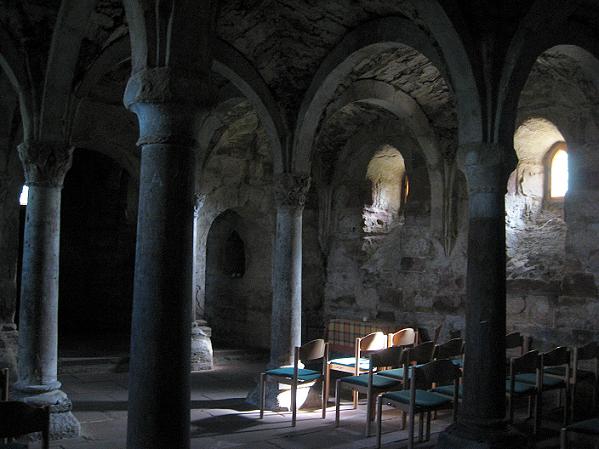 Memleben, the crypt
The most famous church this time around was the cathedral in Naumburg. There had been an older church but when Naumburg became the seat of a bishop, a larger church was needed. It was built on base of the older one and started out as late Romanesque (1210) in the east choir to progress to early Gothic in the west choir (about 1250). 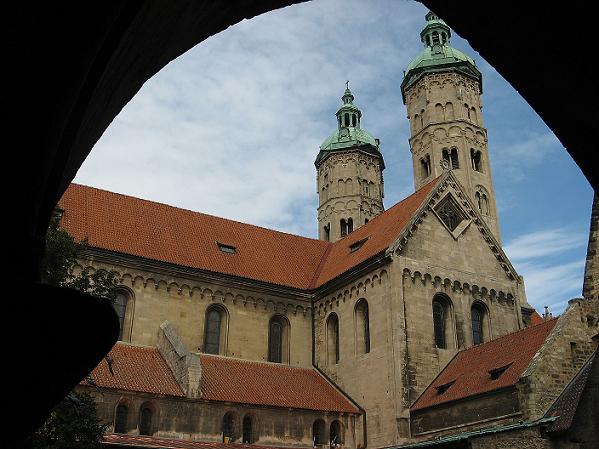 Naumburg cathedral, the Romanesque east towers seen through the cloister
The west choir was built by the Master of Naumburg, architect and sculpturer. We've met one of his works in Mainz. The feature for which the cathedral is famous are the donator figures, a number of historical persons sculpted in stone with an amazing life-likeness of expression. You can detect them in the niches between the windows (see photo below) but of course, I got closeups of them, too. 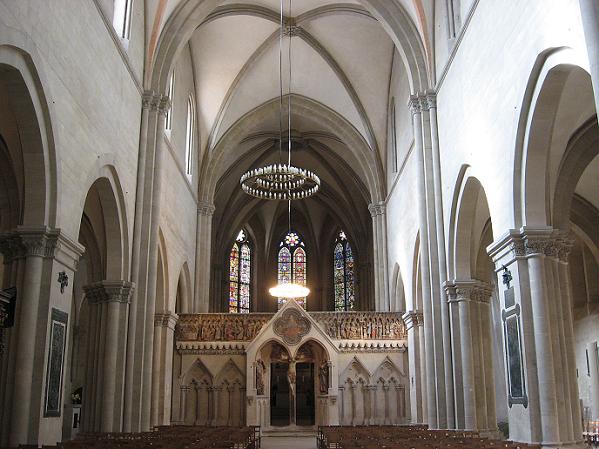 Interior, view to the west choir and the choir screen
Usually, that place in the choir was reserved for ecclesiastical portraits, apostles, saints, maybe bishops, so to put lay persons there was very unusual. There's a theory that the statues may have replaced the tombs from the older church and thus gave the founders / donators a place of worship back.

The choir screen is a work of the Master of Naumburg as well. 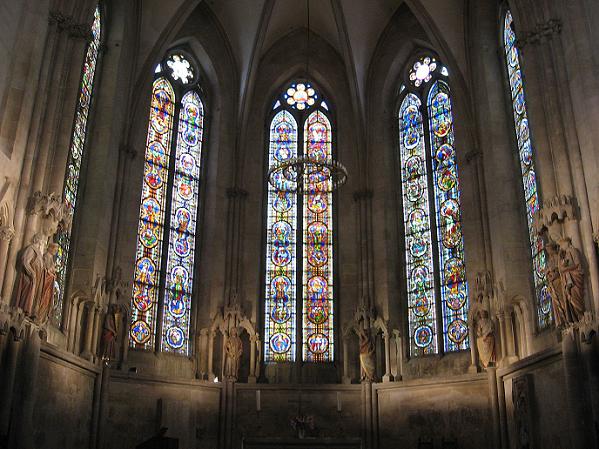 West chor with the donator figures (Stifterfiguren) and Gothic windows
The last church in the collection is another Romanesque / Gothic hybrid. The monastery of Pforta, also known as Schulpforta, was a filial foundation of the Cistercian monastery in Walkenried, and like that one, has a double-arched cloister. The monastery served as boarding school (it still does) after the secularisation and thus survived. 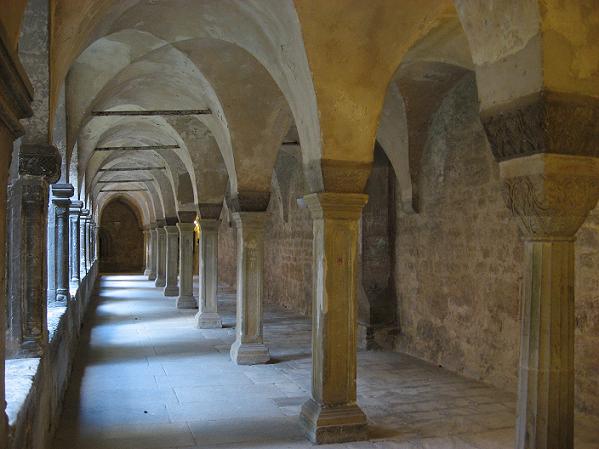 Schulpforta Monastery, double cloister
So lots of Romanesque but no Romans. I hope my readers from that time excuse my lack of Roman posts lately. Aelius Rufus is already complaining about the long hiatus and even got out of his bath to tell me.

Vineyards and Rivers
And finally some photos of the surroundings. You can't travel in the Saale-Unstrut region without catching some vineyeards - the area is famous for its wines. 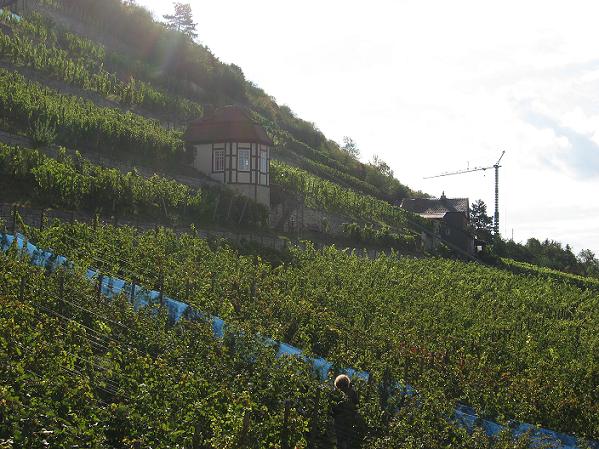 Vineyard in the morning sun, seen from my hotel room
Our little hotel is situated in the middle of the Ducal Vineyard (which today is owned by a farm cooperative), so we got a close look into a vineyard in autumn. 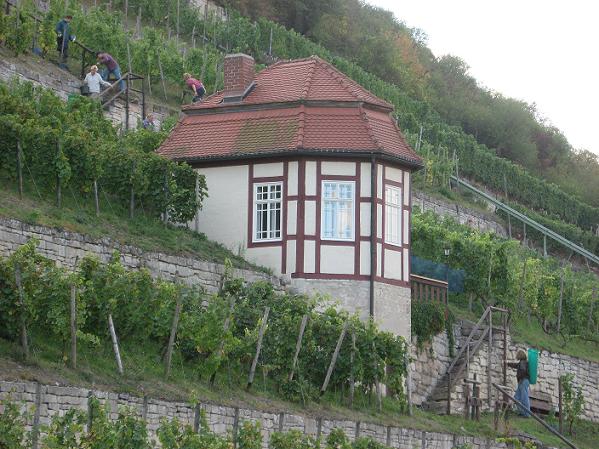 Wine harvest
Those hills are really steep; it's no easy work to gather the grapes. But the final result is very yummy. :) 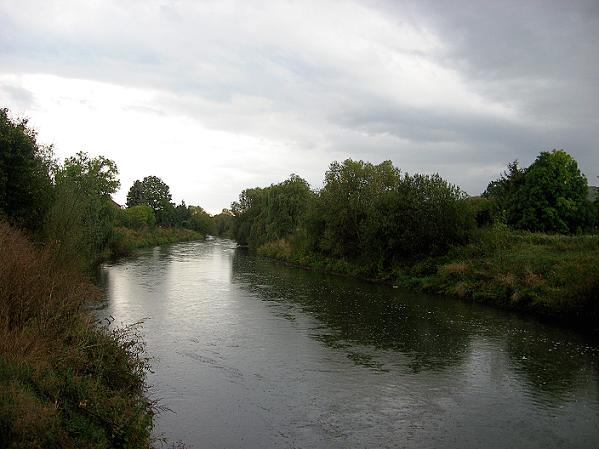 Unstrut river in the rain
The town Freyburg where we stayed is situated directly at the Unstrut river. Mostly the weather was ok, but there was a big rainshower just when I went down to take some pics of the river. 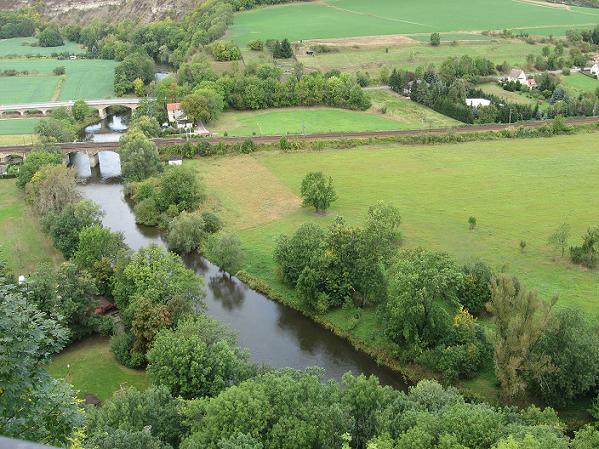 Saale river, seen from Rudelsburg Castle
To cover the other main river in the area, here's a photo of the Saale, too. It confluences into the Elbe further north-east. 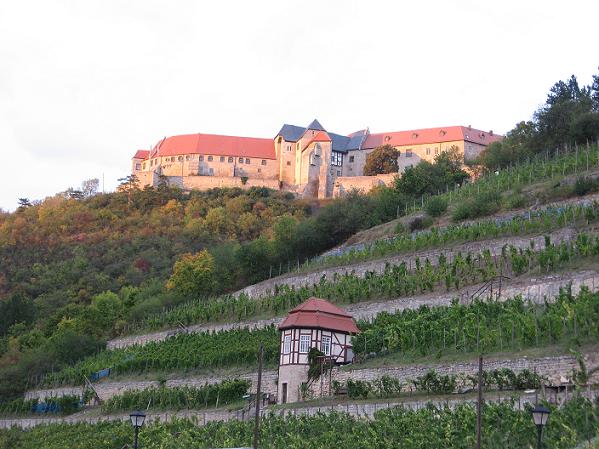 Neuenburg Castle and the vineyard in the evening sun
And finally a lucky shot of the Neuenburg, with part of the Ducal Vineyard in front. I caught that one minute when the evening sun came out and tinted everything with a lovely golden shine.

24 Sept 2012
Off To Hunt
some more castles and cathedrals.

As mentioned before, I'll be off along another bit of the Romanesque Road that connects a number of churches and castles in Saxony-Anhalt that have at least significant elements remaining from the Romanesque period. Which also means, as always, a journey into history. The focus will be somewhat Ottonian this time. Otto the Great (who in fist marriage was married to Edgitha; granddaughter of Alfred the Great*) had some very dysfunctional family relations, too. Rebelling brothers, a rebelling son .... it's not easy to become King of the Germans, let alone Emperor of the Holy Roman Empire, if your family doesn't cooperate and drags most of the nobility into the mess. But Otto eventually succeeded. 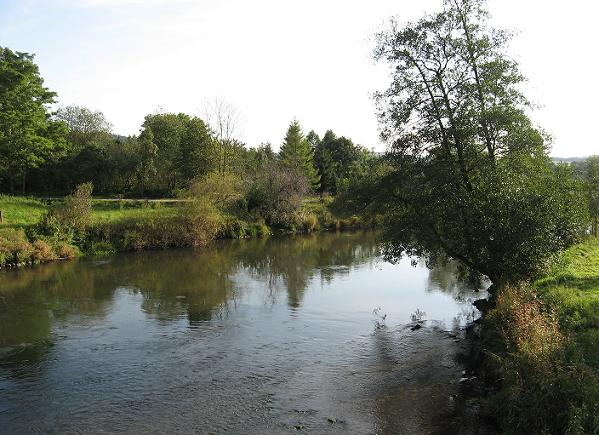 The Werra river near Creuzburg
The Werra (photo above, from a trip we did last year) is rich in history, as are the Saale and Unstrut rivers we're going to see. Including some of the Saale castles - you can't have a river without those lining up along in Germany. :)

* It was the son from that marriage, Liudolf, who got mad at daddy - not entirely without reason, I think -, collected some friends and started a war in 953.

But at least I did some hiking tours with my father to collect more photos. Our latest hangout has been the Nature Reservation Meissner and Kaufunger Wald, halfway between Göttingen and Kassel and thus an easy target for day tours. 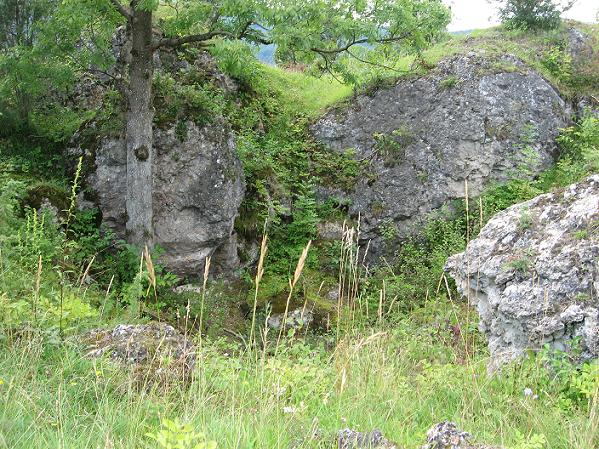 One of the dolines
Since water is still washing out the rocks, it's not safe outside the marked paths because the ground may give way. You don't want to fall into a a sink hole in the karst. Those thingies last swallowed an ox cart back in the 60ies. 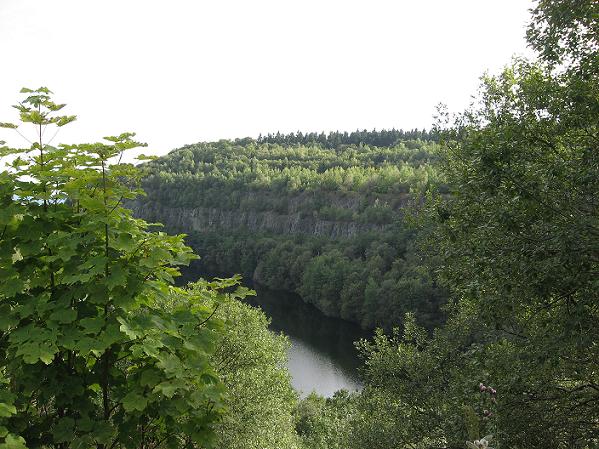 Kalbe Lake
The Meissner itself consists mostly of basalt with layers of brown coal inclused. The Kalbe Lake was caused by coal mining. After the mine had been abandoned, the pit filled partly with water. There is still coal in the mountains and it's still burning, so the air smells of sulphur around the lake. 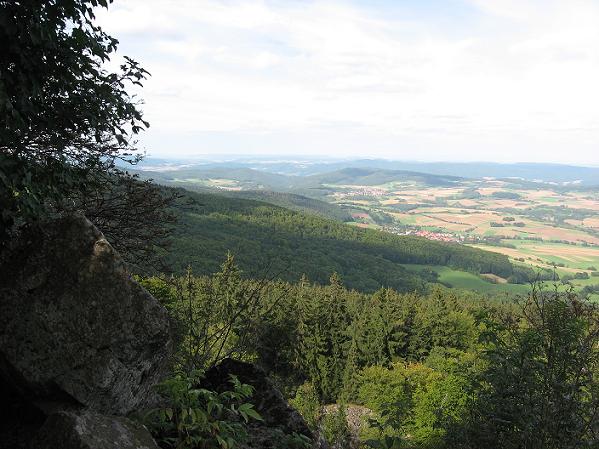 View from the Kalbe
Besides the main top, the Hoher Meissner, there are several other ones that offer a nice view over the surrounding landsape, like the Kalbe (719 metres above NN). The Meissner also draws lightning storms as we learned a few days prior to this visit when we were forced to turn back, though the weather was fine all around the mountains. 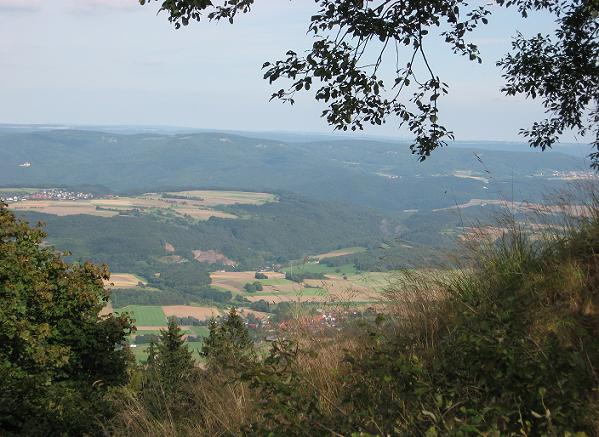 Another view from the Kalbe
At the foot of the Kalbe (but still 623 metres above NN) there's a much older lake, or rather a pond; Mother Hulda's Lake (Frau Holle Teich), a natural standing lake on a layer of clay. A casual mention of Roman coin finds in the lake made me wonder if it was a sacrifical lake in Germanic times, but I need to find out more about that. 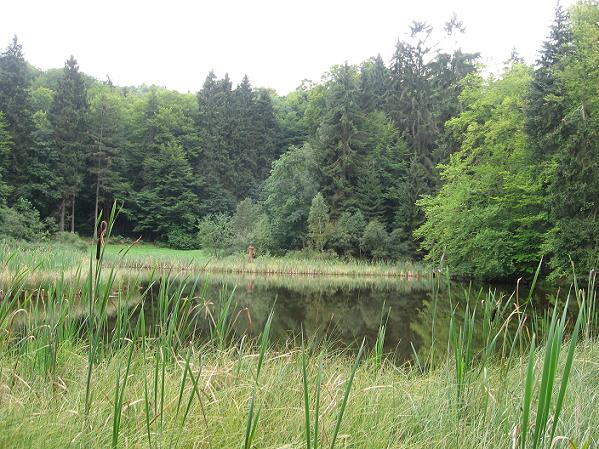 Mother Hulda's Lake
So that's fodder for some posts once I'll get back to being a good little blogger again.

But first we have at least two more day tours planned, and a longer trip to Naumburg and Memleben; important places of Medieaval (esp. Ottonian and Salian) history.