21 Feb 2013
Gnisvärd Ship Setting / Gotland
How about some sunny pics in this grey February? I swear the sun's off vacationing somewhere else in the galaxy, having some drinks in the Milky Way Bar or whatever. But at least she sent a comet mail.

So here are some photos from a ship setting on Gotland, taken on a sunny if cold May afternoon. 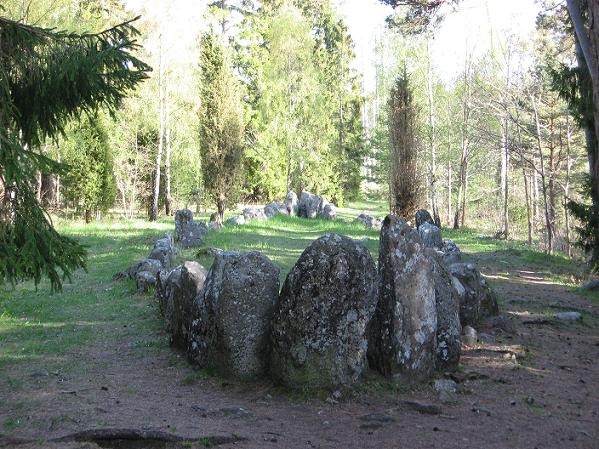 Bronze Age ship setting at Gnisvärd, Gotland
Ship settings are stone settings in the shape of a boat that mark grave or cremation burials. They are mostly found in the part of Scandinavia that borders the Baltic Sea (Denmark, southern Sweden, Gotland) though some have also been found in the Baltic States, Finland, Russia and Germany. Their size varies from a hundred metres (the remains of the setting at Jellinge is the largest, it may have been 300 m, though other large ones are usually under 100 m) to just a few metres. 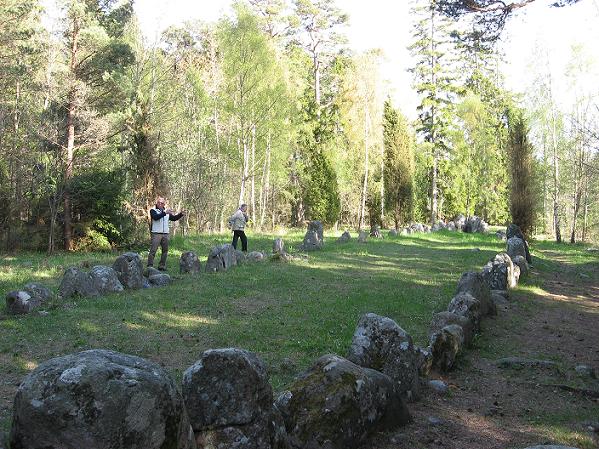 View from the side
The larger settings date to the late Bronze and early Iron Age, while the smaller ones are from the Viking time (ca. AD 800-1150*). Ship settings should not be confused with boat burials of the Vendel time (AD 550-800, the best example is Haithabu / Hedeby) and the Viking time (fe. the famous Gokstad ship now displayed in Oslo) where real ships are used as grave and buried under an artificial hill. 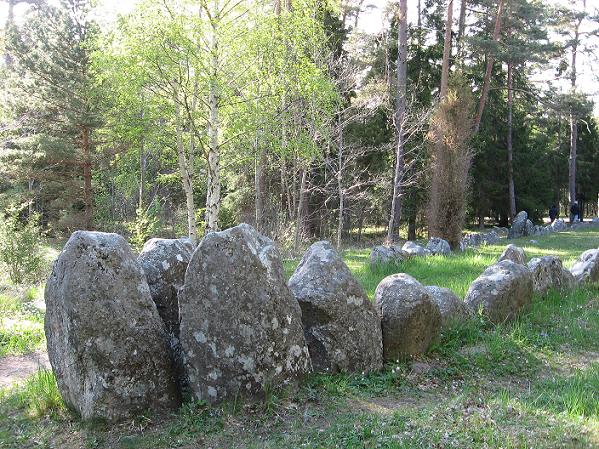 View from the other side
Most ship settings consist of erratic boulders - there are plenty of those in lands once covered by glaciers and moraines - set in a boat shape in north-south direction. In some the stones are touching while in others they are a bit apart. Usually, the stones towards the bow and stem are higher than in the middle; in some large variants they can reach up to 4 metres. Some Danish settings have runic inscriptions at the bow. 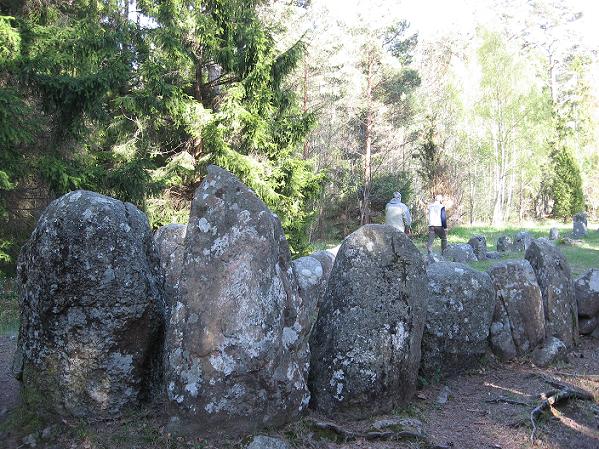 Closeup of the stones at the stem
A few settings are made of standing limestone plates, and one on Bornholm / Denmark has those plates lying on the ground.

The ships can have extra stones in position of the mast; others have plates inside instead of earth and grass; some had been covered by an earthen mound. 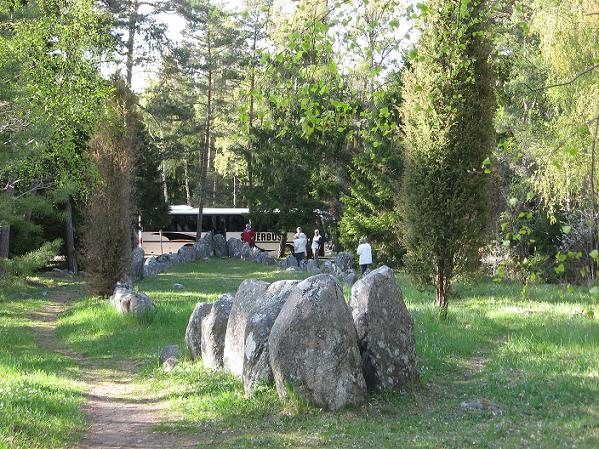 Seen from the other stem
The urns were usually put in boxes and can be found within or without the ship setting. Some of those settings have been used for generations, as urns from several centuries demonstrate, while others demark the grave of but one man, likely a chief. Several ship settings can be found in close proximity; esp. in Gotland they tend to come in groups of 4-5 settings. 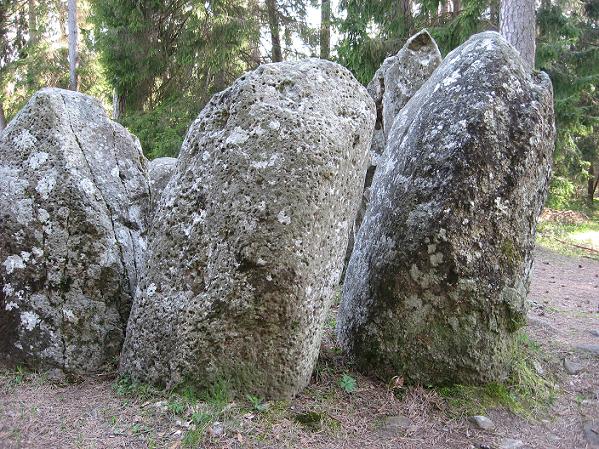 Closeup of the bow
Gotland is particularly rich in ship settings; some 350 still remain. Some scientists assume the habit may have started on Gotland and spread from there.

The settings are usually of middle size - the one at Gnisvärd is the largest with 47 metres length and 7 metres width. About hundred stones have been used to shape the ship. Stem and bow are a bit higher than the middle part (1.30 m). There is another, somewhat smaller setting about 100 metres to the south, and east of it is a Bronze Age burial field. 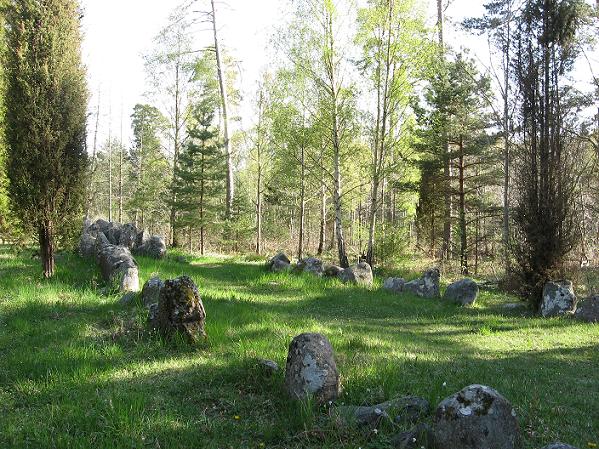 Another view of the Gnisvärd ship setting
The meaning of those ship settings is still disputed. One explanation is that the dead should have everything he needed in the afterworld, though personally I wonder what use a stone ship would have had (the later boat burials may make more sense in that context). What they do show is the fact that ships played an important role in the Scandinavian culture long before the Vikings sailed across half of the world. 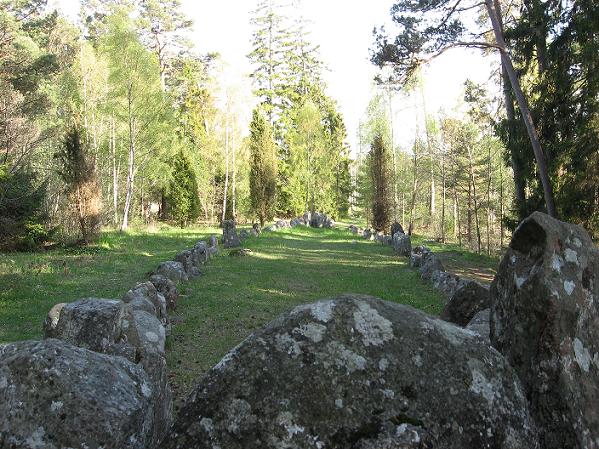 A final view
I hope you enjoyed some stones in a typical Scandinavian pine and birch forest. It is a lovely place.

* Though that date is not undisputed, another often suggested date is 793 (attack on Lindisfarne) - 1066 (Norman conquest of England).