7 Sept 2013
Weser Skywalk and Hannover Cliffs
Yes, we got a skywalk, too. Not as grand as the one in Colorado, but then, the Weser river and the Hannover Cliffs are no Grand Canyon. But the scenery is beautiful and pretty typical for the German mittelgebirge. And it's free and photographing is allowed, heh. 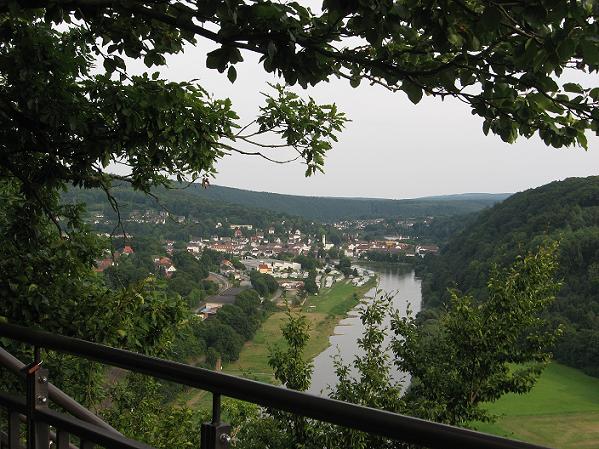 View over the skywalk towards Bad Karlshafen

The skywalk has been erected in 2011. It is anchored in the rock, made of zinc-coated steel with grillage floors; it has two levels with the lower one stretching 4 metres outward off the cliff. The grillage floor was a bit tricky for me since I don't take heights well, and you can see right down beneath your feet - 75 metres to the river and road. But I braved it. 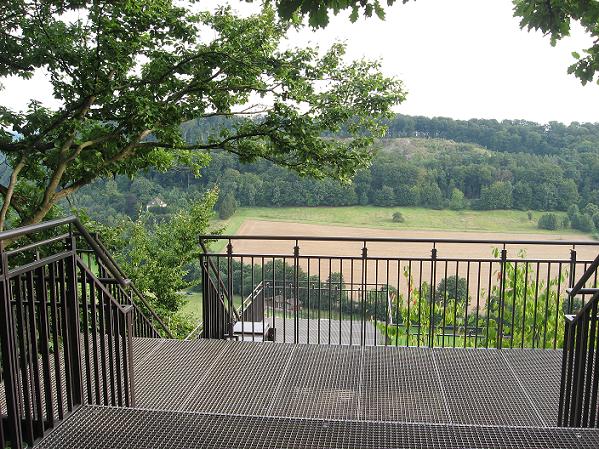 View from the upper platform to the lower one
The Hannover Cliffs are close to the town of Bad Karlshafen, with the villages of Herstelle and Würgassen on the other side. In that area three German counties meet: Lower Saxony, Nordrhine-Westphalia, and Hessia; the place is known as the Dreiländereck. Bad Karlshafen is a Huguenot settlement. Herstelle - old name Heristal (= camping site of the host) - goes back to Carolingian times (AD 797), though the old abbey and the 13th century castle have been replaced by Baroque / 19th century buildings. 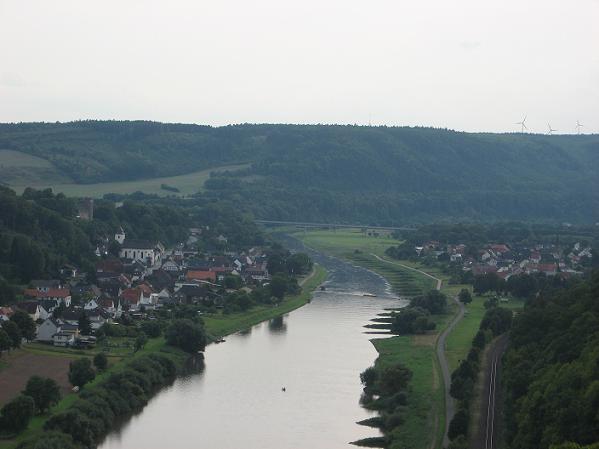 View downriver towards Herstelle (left) and Würgassen (right) from the lower platform
The skywalk sits on the easternmost of the seven Hannover Cliffs (Hannoversche Klippen) on the northern / right shore of the Weser and the southwestern fringe of the Solling mountains. They are named after their location in the former Kingdom of Hannover at the border to Hessia. The cliffs are a protected nature reservation today. 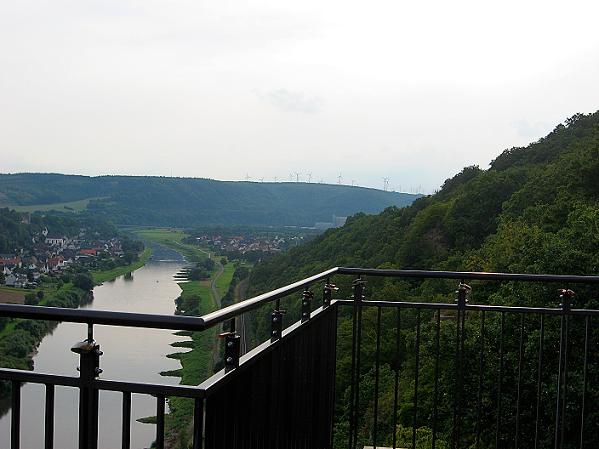 View towards Herstelle and Reinhardswald Forest at sunset, with the skywalk railing in the foreground
The Hannover Cliffs are sandstone, much like the Hessian Cliffs on the other side of the river about a mile south-east, and belong to the same geological formation, the Triassic (~ 250-200 million years ago).

The Triassic is distinguished by subsequent layers of Buntsandstein, musselkalk and black shale mixed with dolostones (Keuper) But that is only valid for the Germanic Bassin covering Germany and northwestern Europe; else the lithostratigraphical distinction is simply Lower/Early, Middle, and Upper/Late Triassic.

At the time there was one continent - Pangaea - and the climate was mostly hot and dry, more humid along the Paleo-Thethys ocean coasts and in the polar regions. There were also monsoon events. 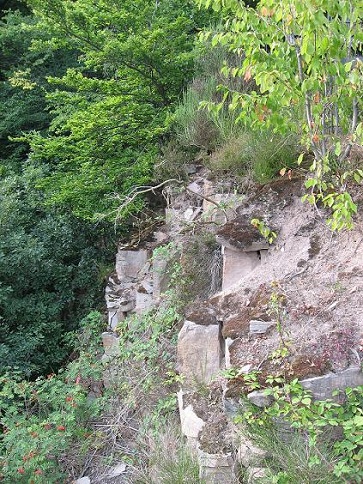 Detail shot of the sandstone cliffs
A simplified version of complicated geological processes goes like this: The zechstein sea dried up and a system of north-running rivers left behind layers of sand which over time were pressed into sandstone by the weight of new depositions. Next the sea flooded into the bassin and added a layer of marine sediments - the musselkalk. When the sea fell dry, the rivers were left behind, still transporting material around; but there were also lakes that produced a layer of fine clay that hardened to shale. During the entire process salt was left behind in spots as result of the evaporization in the hot climate (the salt deposits along the Leine river were mined by the Germans in Augustean times). 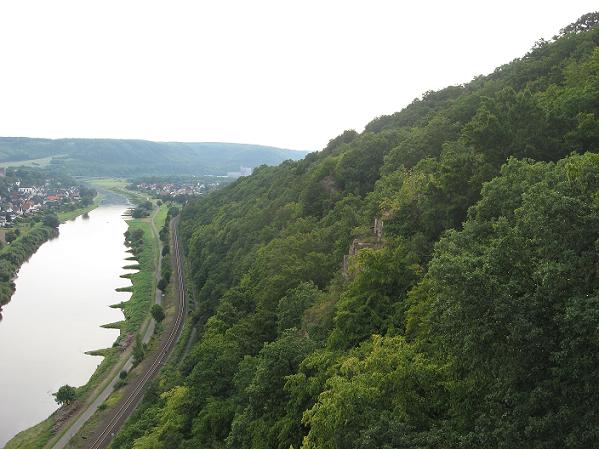 Hannover Cliffs, view downriver towards Herstelle
All these developments did not occur at the same level all over a diverse landscape, of course. There is no musselkalk layer above the sandstone strata at what today is the Weser - what there may have been, erosion took away when the ground was lifted. The Weser valley was cut out of the sandstone only during the last million years. Salt deposits inclused in the sandstone were washed out and weakened the rock in some parts; that's where the river carved its bed.

The sandstone has been used since the Middle Ages, and especially in building the palaces of the Weser Renaissance. It is still quarried in small scale. 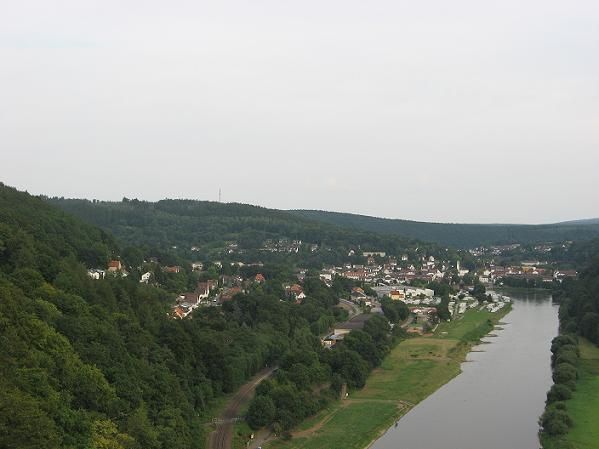 View towards Bad Karlshafen
Today, the cliffs are populated by trees in a mixed forest of beech and oak. Since the cliffs are too step, the trees are not felled for use but grow until they fall by themselves - the forest is a bit of a jungle. The warm stones on the south-looking cliffs offer a home for butterflies and salamanders.

There are two ways to the skywalk, one from the river and one from above. The latter is less stressful. *wink* Though the way back to the car is still a bit uphill with a steep slope falling down one side. They put up a railing up parts, though.