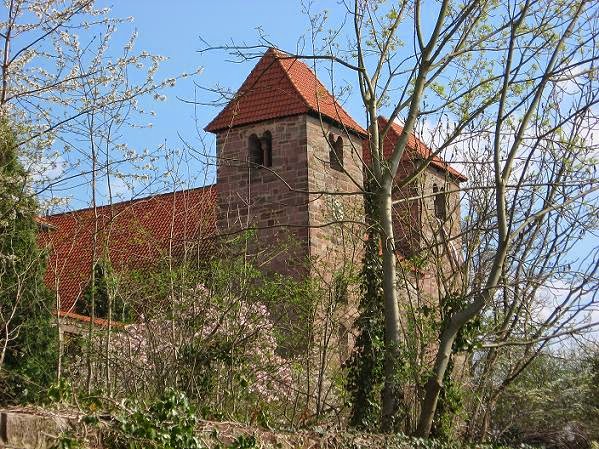 Church in Reinhausen, westwork
Peeking through the shrubs is the westwork of the church in Reinhausen near Göttingen. This is the main church built by the counts of Reinhausen who also founded Helmarshausen Monastery. The church dates to the early 11th century and is a fine example of but lightly altered (the large windows are Baroque) Romanesque style 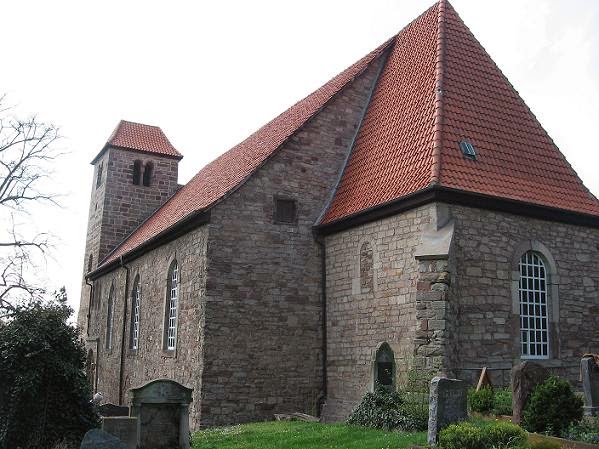 Church in Reinhausen, seen from the east apse (which is curiously rectangular)
The church sits on a hill above the village of Reinhausen. There had been a castle on the same hill as well, but of that almost nothing remains.

The church celebrates its 1000 year anniversary this year and has undergone renovation. During that process, some murals and reliefs have been found, like the one below showing Christ's way with the cross, dating to about 1400. 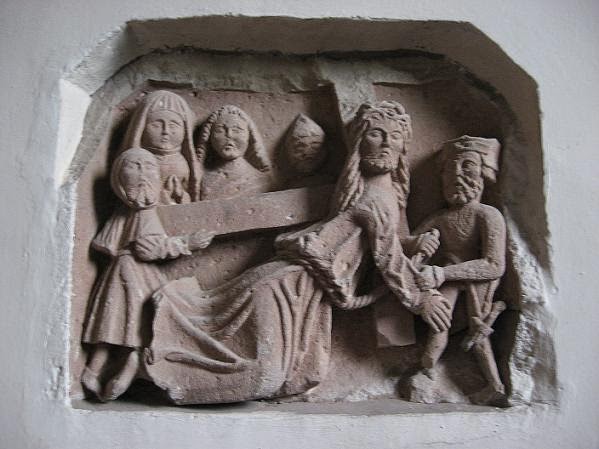 Gothic relief, a Good Friday motive
I'll be away after Easter to visit some places in southern Germany. I'll be back at the beginning of May.

5 Apr 2014
Helmarshausen Monastery
I have mentioned that one of the reasons the Krukenburg fortifications were built was to protect the monastery of Helmarshausen - Helmareteshus - in the valley beneath the castle. Of this monastery not much is left; only the foundations of the church (that have been marked so one can see the layout of the building), and the eastern wing of the adjacent monastery buildings that today houses a youth hostel. Stones from the church, which fell into decay in the 17th century, have been used to build a large barn in 1749. 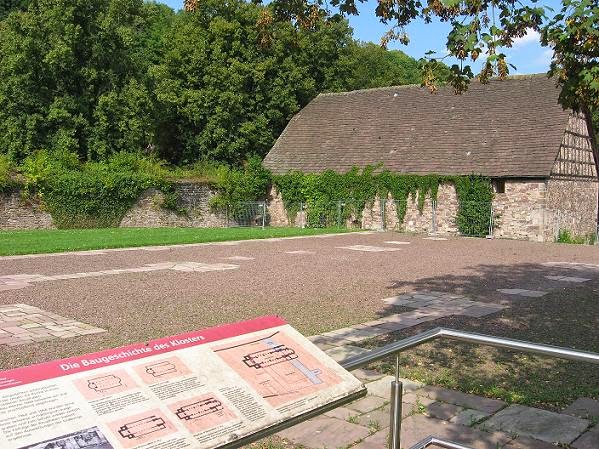 Helmarshausen, foundations of the monastery church (with the barn in the background)
The monastery was founded by count Ekkehard of Reinhausen and his wife; one source says because they had lost their young son and heir. The foundation was confirmed by Emperor Otto III and Pope Sylvester II in 997. The counts of Reinhausen (today a village near Göttingen) were a branch of the Esicon (sometimes also named Asicon) family which also was the ancestor of the more famous Billung family.

In the beginning, Helmarshausen got the same rights as the famous Benedictine abbey of Corvey, fe. the rights of market and coin, and imperial immediacy. But bishop Meinwerk of Paderborn (the same who obtained the plans of the Church of the Holy Sepulchre which later would be used in building the Krukenburg chapel) who consecrated the church of the monastery in 1011, tried to snatch those rights for the see of Paderborn. His superiority over the monastery eventually got confirmed by the pope. The heirs of Count Ekkehard were not happy about that and one Thietmar, a member of the related Billung family, even invaded the lands of Paderborn with an army. A final agreement was reached only in 1024. 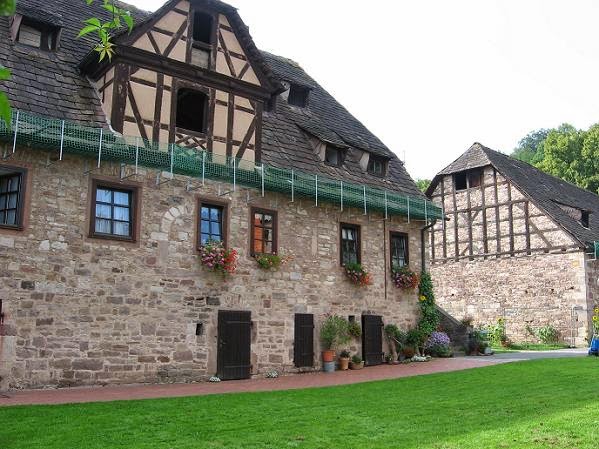 Former east wing with the barn in the background
The bishops of Paderborn supported the monastery and laid the groundwork for the scriptorium that would produce those amazing illuminated manuscripts.

Several local nobles - including again, the Counts of Reinhausen - donated lands and money to the monastery. Those were the basis for the expansion of the church to a length of 65 metres and the addition of outbuildings, as well as its rise to one of the centres of Romanesque book illustration and gold- and silversmithing work in Europe between 1120 - 1200, surpassing even Corvey. 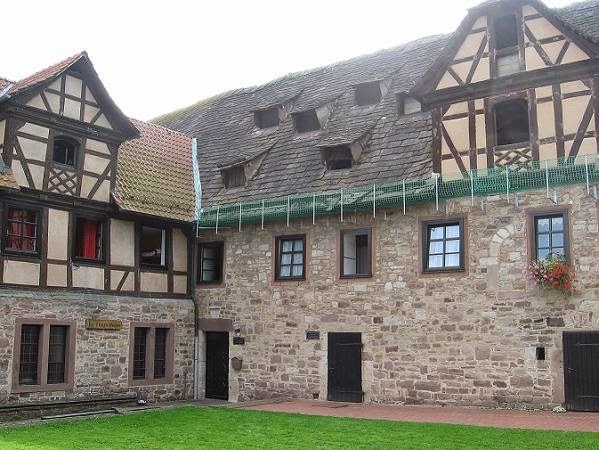 East wing seen from the other side
Between 1107 and 1130 the monks in the workshop created a number of portable crucifixes and altars, and books covers which in the Middle Ages often were grand affairs with gold ornaments and jewels.

The scriptorium had close connections with the monasteries and abbeys at the Rhine from where the monks learned the Romanesque style of book illumination, which then spread to Saxony. From the 1150ies onward the number of laymen as patrons rose. Illuminated gospel books, like the one done for Heinrich the Lion and his English wife Matilda, were a typical produce of book art of the time.

But in the 13th century the competition of lay workshops increased; the monks of Helmarshausen failed to adapt to the new Gothic style of illustration, and the political situation of the monastery became uneasy. The role of Helmarshausen declined. 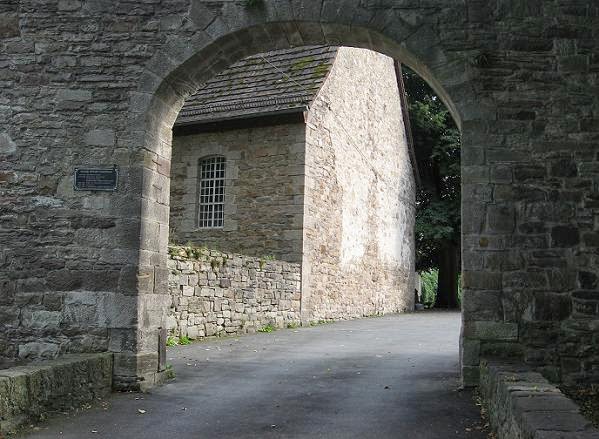 The main gate of the monastery
We know little about the history of the monastery in the years after it came under Paderborn superiority. One fact is the translation of several relics, among them those of St.Modoald from Trier under Abbot Thietmar I (1080 – 1111). Modoald had been a bishop in Trier in the 7th century and not even martyred, so I have no idea how that made him a saint. But his relics did attract pilgrims and that meant money. Tourist trap Medieaval style.

Helmarshausen tried to reagin imperial immediacy in the second half of the 12th century. One abbot even faked chartes to prove the monastery's independence from Paderborn, but Pope Alexander III confirmed the rights of Paderborn in 1160. In 1182, the protector and reeve of the monastery, Heinrich the Lion, lost that position together with his duchy of Saxony and was exiled. As result, Helmarshausen was dragged into the quarrels between Welfen and Staufen (see also the post about the Krukenburg). 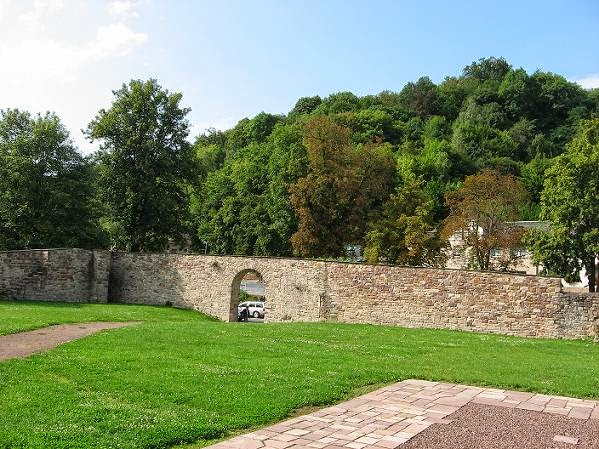 Enclosing wall with side entrance (and a corner of the church foundations)
Pope Coelestine III confirmed the privileges of Helmarshausen in 1191. The abbot Thietmar III then refused to get invested by Bishop Bernward of Paderborn who in turn excommunicated him.

No wonder Archbishop Engelbert I of Cologne used the chance when it opened. In 1220, he got half of the town of Helmarshausen and in turn promised to protect the monastery. For that, he built the Krukenburg fortifications. Helmarshausen became one of the main positions of Cologne at the Weser.

But after the battle of Worringen in 1288 where the archbishop (Siegfried of of Westerburg: the whole affair was a feud about an inheritance, and of course, power, involving the duke of Brabant and some nobles at the Rhine) was captured by his enemies, the see of Cologne lost its influence at the Weser, and the bishops of Paderborn regained superiority over Helmarshausen monastery. Bishop Bernhard V got he rights on both the monastery and the former Cologne-held part of the town in 1323. The rights to the town were then sold to the archbishop of Mainz, a rival of Cologne. 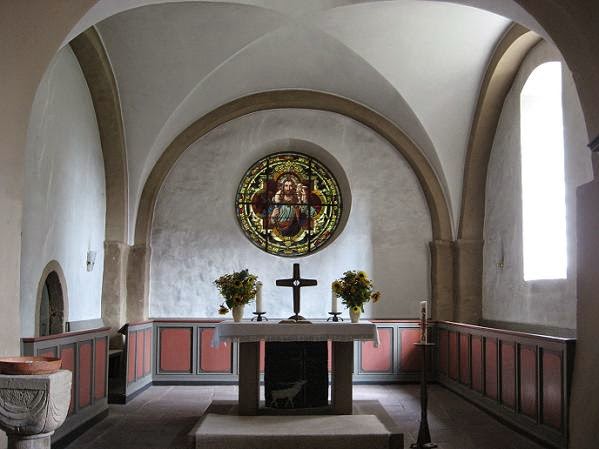 Helmarshausen parish church, the Romanesque choir
In the 15th century, the landgraves of Hessia gained most of the possessions of the archconvent Mainz, including Helmarshausen (1479). The decline of the monastery had begun in the 13th century already; the income decreased and the bishops of Cologne, Paderborn, or Mainz were obliged to sell or pawn out possessions. One may wonder what had happened if Helmarshausen had never questioned the role of the see of Paderborn and stayed under its protection. Maybe the decline could have pushed back, but it would eventually have come anyway.

The monastery was dissoluted during the Reformation (1538) and Landgrave Philipp of Hessia had a tithe office established in the monastery. Today only the east wing and the barn from 1749 (to keep the tithes paid in grain) remain. 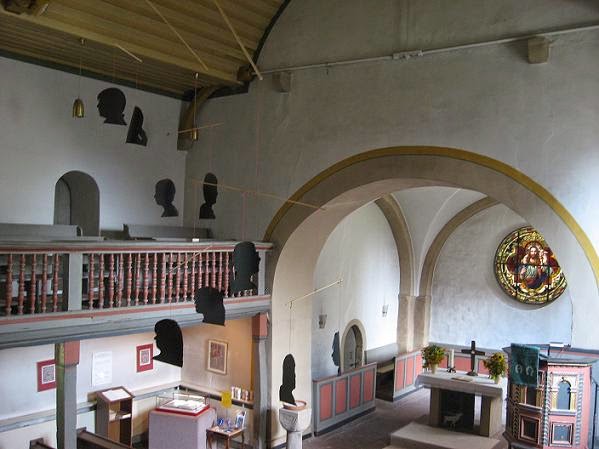 The choir seen from the gallery
Close to the monastery is the old parish church of Helmarshausen, a Romanesque building that has undergone several renovations; last time in 1799 when the wooden gallery was added. The tower and the choir still show features of the original Romanesque architecture, though. The church is difficult to photograph from the outside because of other buildings getting the the way.

The church was originally used by the Benedictine monks (since 997) but they soon built a larger one and left this one to the parish. It today displays one of the facsimiles of the Gospel of Duke Heinrich of Braunschweig.