2 May 2014
Back With Booty - Churches and Cathedrals
I'm back and after sifting though some 2,000 photos, I got the usual overview for you. Since I concentrated on towns this time, I visited quite a few churches, though not every one on the way; only the important ones and those without Baroque 'improvements' inside which is, alas, rather common in southern Germany. 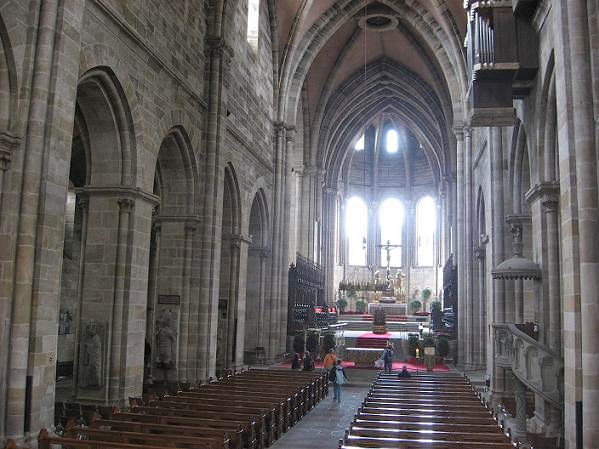 Bamberg Cathedral is a fine example of a double-quired Romanesque church.

I had some bad luck since my camera, trusted compagnon for 8 years, decided to threw a fit right inside the cathedral. Fortunately, I found a store that had one fulfilling my requirements and which is even better, albeit thrice the size of my late one. The above photo is one of the last I shot with the old camera while it still worked. 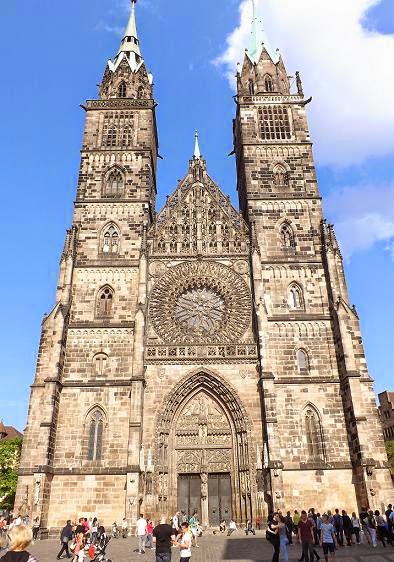 Nuremberg, St. Laurence Church, westwork
Outside views of churches are often tricky since the houses tend to sit too close, but there's a market place in front of the westwork of St.Laurence in Nuremberg which gives a good view of the fine Gothic tracework. 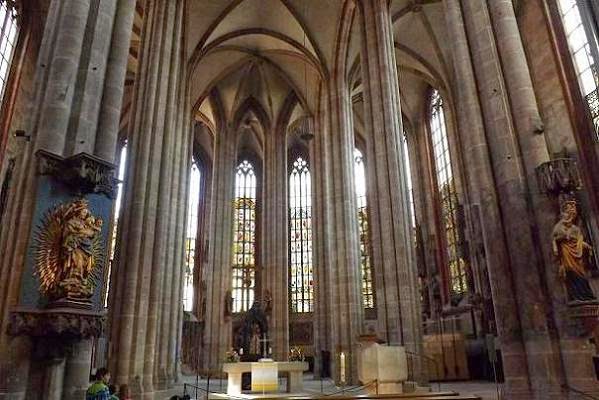 Nuremberg, St.Sebald Church, high quire
Both St.Laurence and St.Sebald have high quires in the Gothic style. There was a bit of a competition going on between the churches. St.Sebald first erected its soaring choir to enshrine the shrine of Saint Sebald; St.Laurence followed suit. 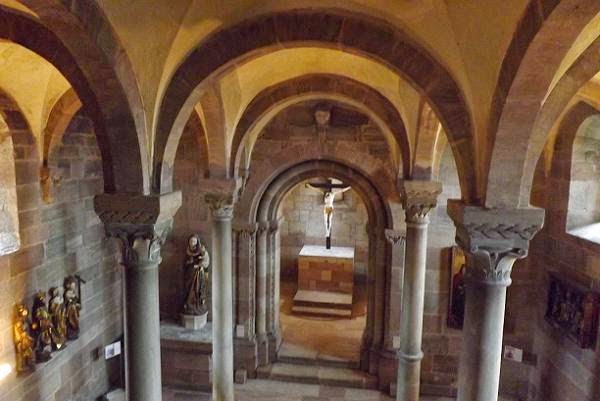 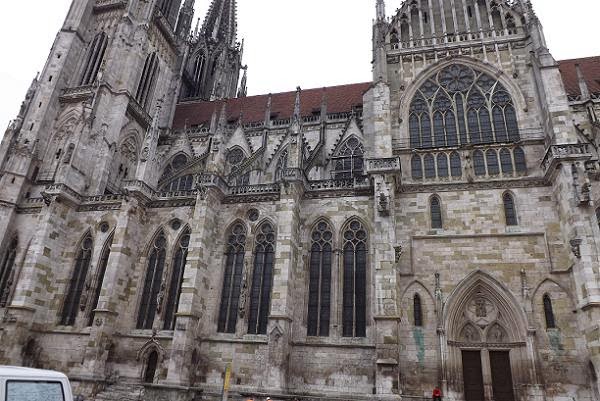 Regensburg Cathedral
The cathedral in Regensburg, Germany's finest example of the flamboyant late Gothic style, is a nightmare to photograph. Even the new camera couldn't catch all of it in one pic since it's so huge. And the traffic in front of it didn't help. The town has Unesco World Heritage status and should really do something about the cars racing along its most famous building. 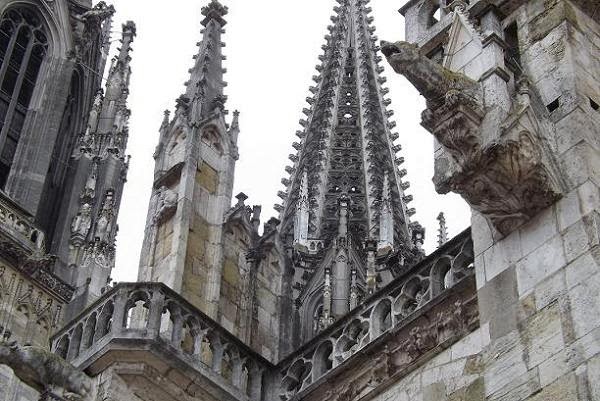 Regensburg Cathedral, soaring spires
A closeup of some of the many details of the facades. Gargoyles, flying buttresses, decorative tracework and figures - you get everything. There's always some scaffolding somewhere, because the old stones need constant care and restoration. 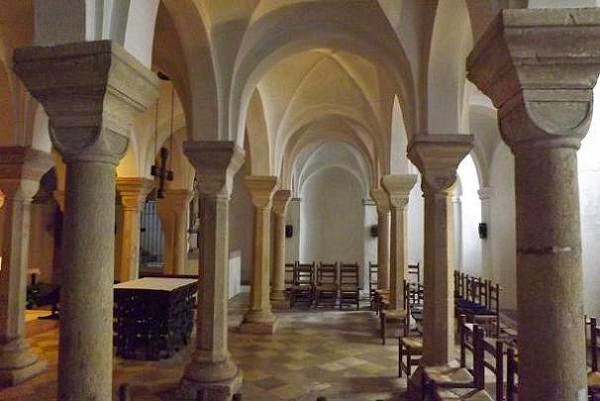 Regensburg, St.Emmeram, crypt
St.Emmeram is the oldest church in Regensburg, but the Asam brethren went crazy on gilded, chubby angel-ed Baroque makeover in the main church in 1732, so the crypt is the only part retaining its Romanesque look. 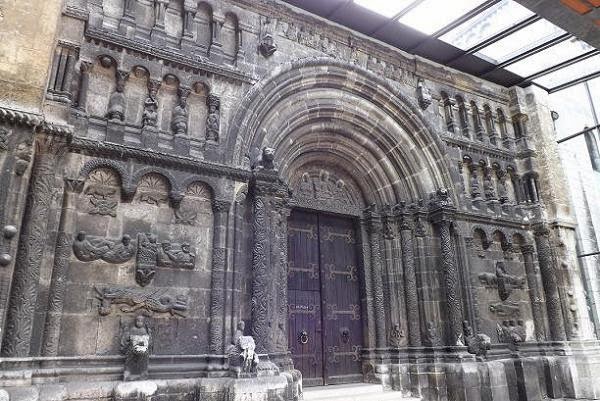 Regensburg. St.Jacob, main entrance
This one is interesting because it was built in the 11th century by monks from Ireland - Scotia Maior - who brought their Celtic style of decorations and created a church unique for Bavaria. It is usually called the Schottenkirche.

(Dont forget to check below for more posts.)

Back With Booty - Castles
Of course, I did some castle hunting as well. Though in case of Nuremberg, the castle is right on the hill towering the old town. 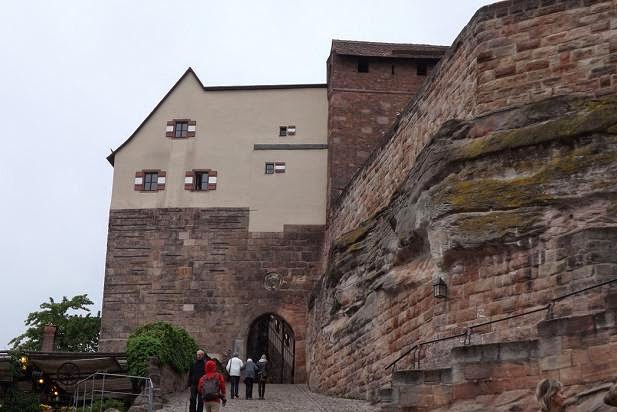 Nuremberg Castle, outer gate
I had been to Nuremberg as child and I remember some features of the castle like the way up to the gate and the fact that some buildings had a half-timbered upper storey. Some things never change, the kids still climb the red sandstone rocks on the hill leading to the gate. 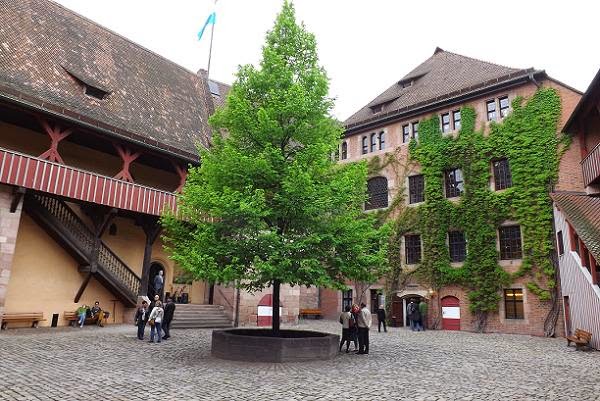 Nuremberg Castle, inner bailey
It was the only day with some rain in the morning (though the next day in Regensburg was overcast as well, the exceptions of an else sunny and warm holiday). It had been a hot summer day when I first visited Nuremberg, that too I remember. 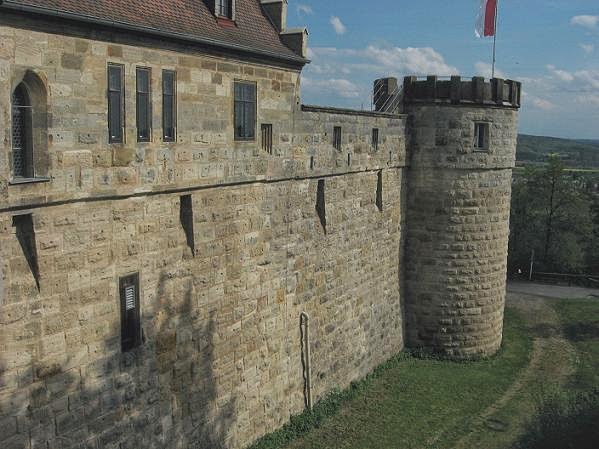 Altenburg Castle near Bamberg
Altenburg Castle is technically part of the town of Bamberg that spreads over seven hills. The cathedral is on one, another holds a monastery now closed for repair, and the highest hill farthest from the town centre is the place of the Altenburg. As if all that walking around in towns wasn't enough, I got me a veritable hike on top of it. But I can't resist additions to my castle collection. 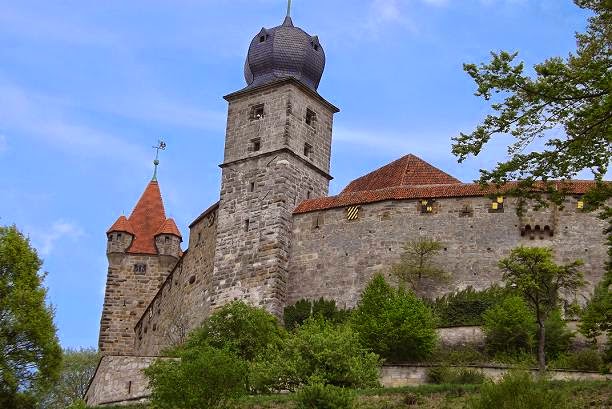 Coburg Fortress, outer defenses of the old castle
Coburg Fortress (Veste Coburg) was not part of my planned itinerary, but since I covered the important things in Bamberg faster than I had estimated and got an extra afternoon, I decided for a little off the road trip. The regional train connections in the area are pretty good, about 40 minutes to Coburg. 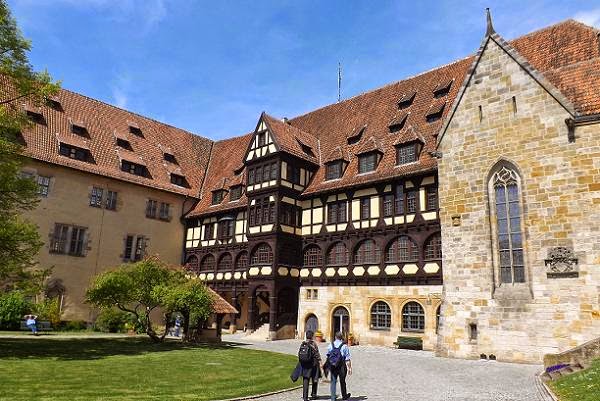 Coburg Fortress, inner bailey
It's one of the largest fortresses in Germany, with origins and buildings dating to the Middle Ages, and additional fortifications during the wars in the 16th and 17th centuries. Definitely worth the detour. 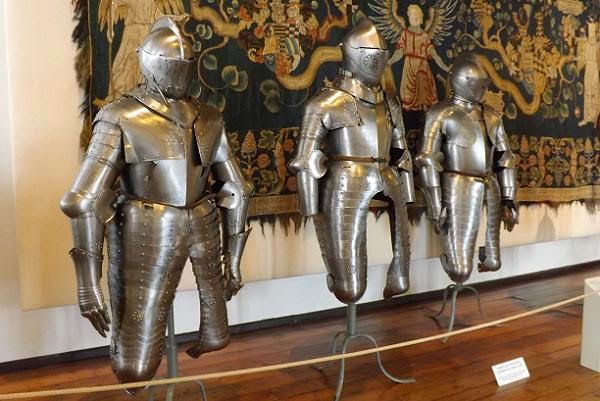 Coburg Fortress, one of the armoury rooms
Several rooms can be visited, among them the armouries with lots of armour, sharp and pointy things, and historical guns of all sorts. My friend Annika will likely drool about the pretty armour. I should ask her to provide me with the correct info for my photos since I can't tell Milanese from English style. ;-) 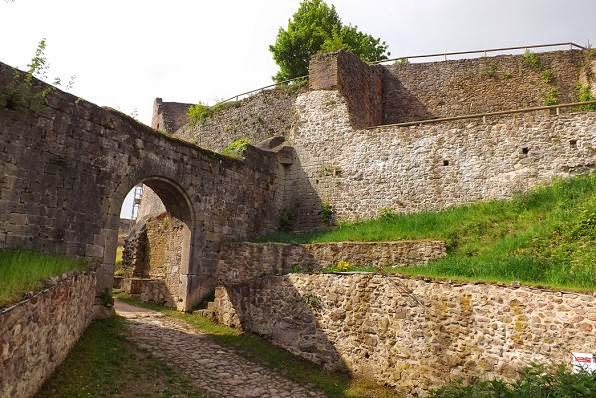 Castle Donaustauf, second gate
Not far from Regensburg, on a mountain at the Danube, is a beautiful castle ruin. Donaustauf has once been an important castle and the remains are still formidable. And I had it all for myself (while the other places usually were busy with tourists, albeit not as bad as in high season). Maybe it's because the only way up there is to walk, heh. 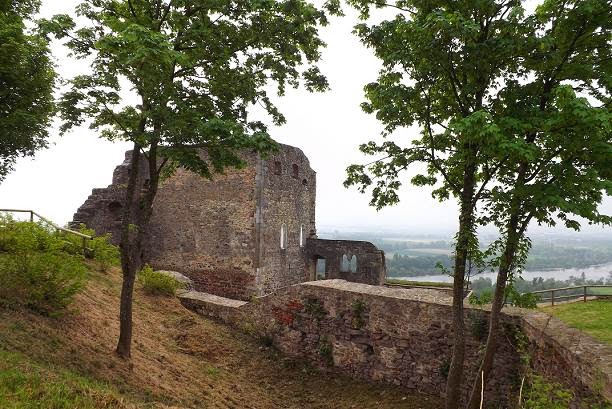 Castle Donaustauf, upper keep and chapel with view towards the Danube
The castle is a veritable maze of baileys and curtain walls covering the upper part of the mountain - the above photo is the highest point.

Back With Booty - Romans
The Limes, the frontier between the Roman Empire and Germania, runs south of Nuremberg and thus I was able to visit some Roman places. And Regensburg is on the Roman side anyway. Aelius Rufus was quite happy, though I had difficulties getting him out of the baths in Weissenburg. *grin* 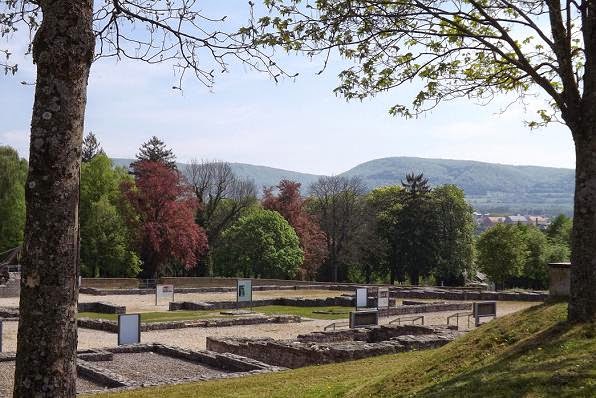 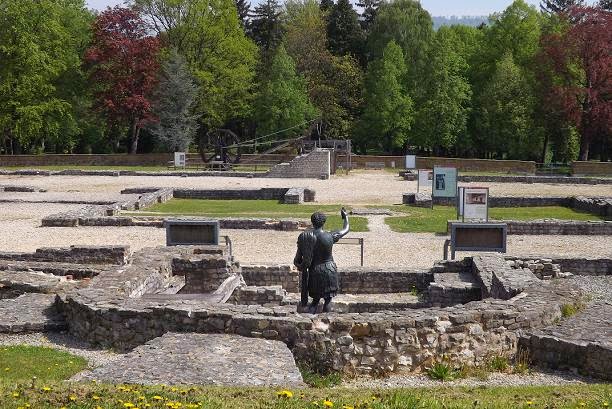 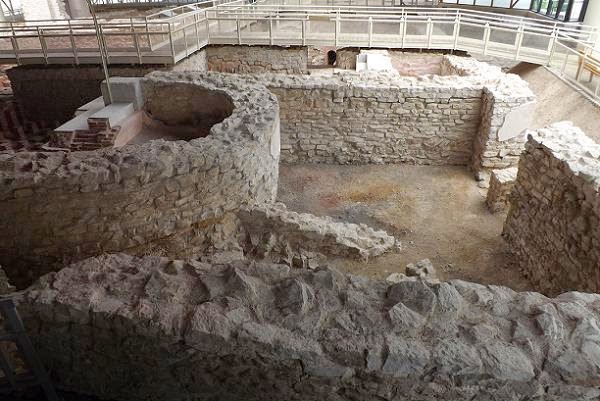 Weissenburg, the baths
Weissenburg, the Roman Biriciana, is a cohort castellum directly at the limes. The foundations have been preserved and one of the four gates reconstructed. Near the fort are the remains of a pretty sophisticated bath complex, almost a spa. 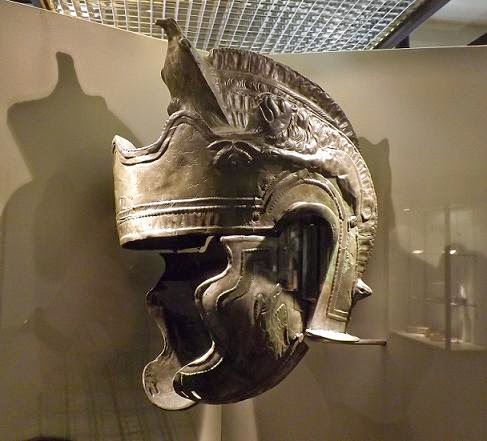 Weissenburg, helmet on display in the museum
The museum is not large, but it got some real shinies from a hidden treasure - probably put in the earth during the Alamannic raids in the 3rd century - that has recently been discovered. 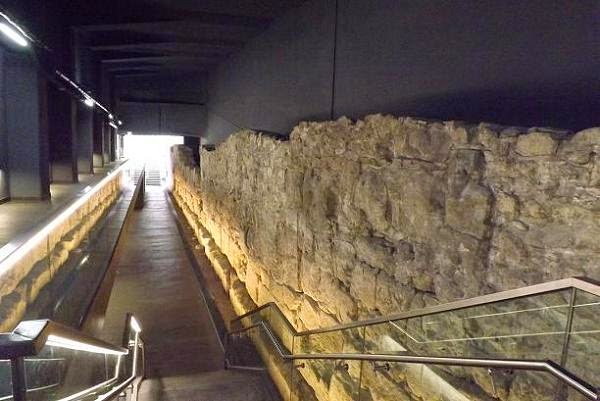 Roman Regensburg underground, parts of a wall of the legionary fort
Regensburg - Castra Regina, named for the river Regen confluencing into the Danube - was a legionary fort for 6,000 soldiers. One can still trace the principal roads in the layout of the old town, and remains of the buildings keep coming up every time a hole is dug in that area. That piece of wall is in a car parking house. 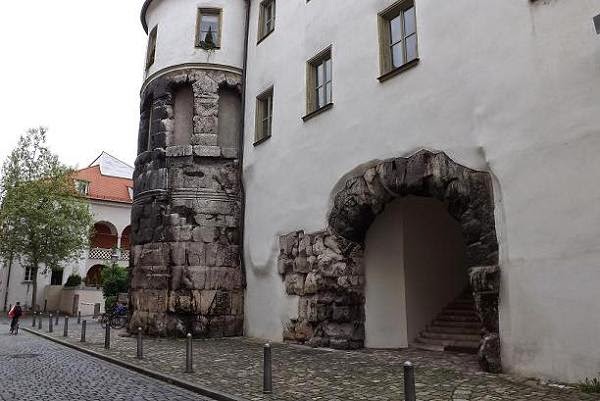 Regensburg, the porta praetoria (one of the gates of the fort)
Some remains have always been visible and integrated into the town architecture, though most of the stones were dismantled and reused. The Porta praetoria is one of the signposts of Regensburg, besides the cathedral and the 12th century bridge (which unfortunately was scaffolded in).

Back With Booty - Pretty Views
All towns I visited (actually, Nuremberg is a city) date back to at least the Middle Ages and are rich in history, which means rich in old buildings other than the churches and castles. Here are a few. 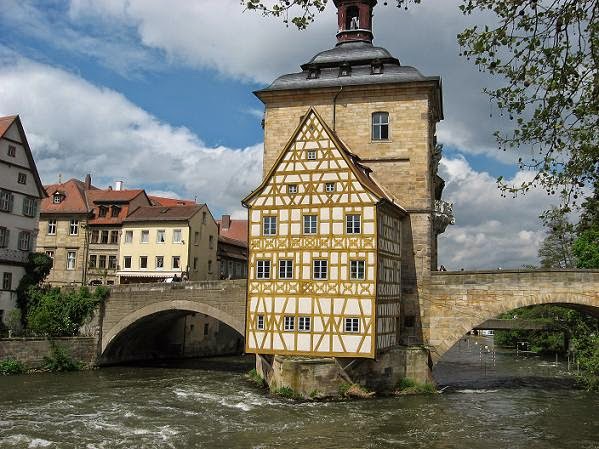 Bamberg, house of the bridge guard, and town hall (the stone building in the background)
on a islet in the river Regnitz
There was some quarrel about the location of the town hall; old town (the part around the cathedral) or new town (which now is old, too), so an islet in the river was expanded by heavy oak posts rammed into the ground, and the town hall was built right on the boundary. 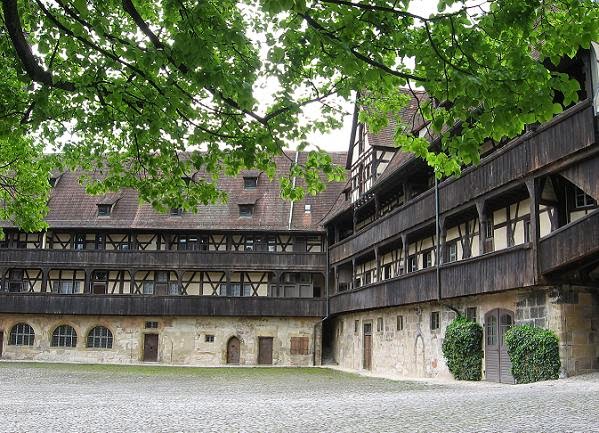 Bamberg, the Old Palace
The Old Palace is a group of buildings that had been used as residence by the bishop and also served as palatine seat for the emperor upon his visits in the Middle Ages when the king's household was still itinerant. Later, the bishop built a new Renaissance palace at the other side of the cathedral. 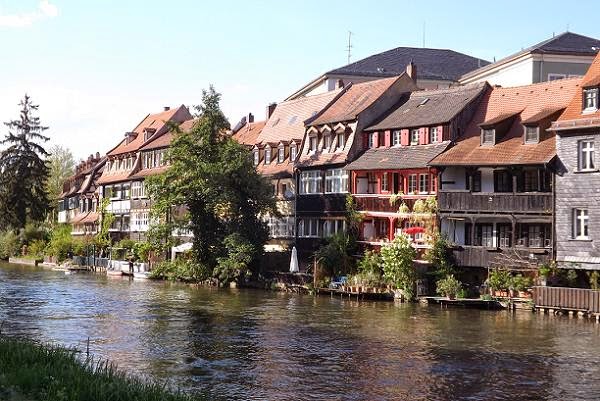 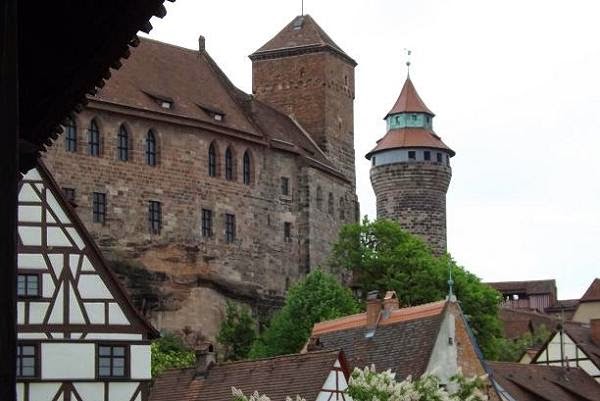 Nuremberg, view from the town wall to the castle
That is another childhood memory. I climbed the stairs to the battlements of the town wall then as well. You can walk along the part surrounding an extended corner of the old town at the castle. More remains of the wall are further down the hill. 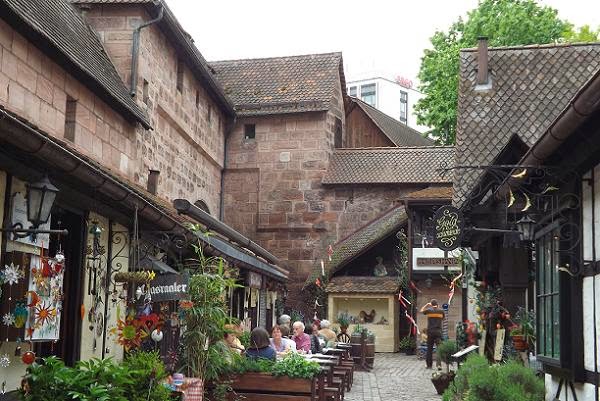 Nuremberg, Artisans' Quarter
The Artisans' Quarter is located directly adjacent another remaining part of the town wall. The little houses are mostly reconstructed and sell kitch or house little pubs, but the atmosphere is somewhat Medieaval with the small spaces between the booths and the wares on display outside. I used to have a beer there on my way back to the hotel after a day of exploring. 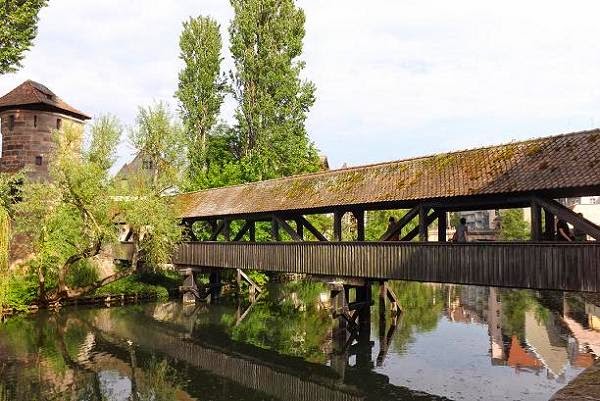 Nuremberg, Hangman's Bridge
One of several bridges over the Pegnitz. The other ones are made of stone, and some are modern, but this ancient timber one is the prettiest of the lot. 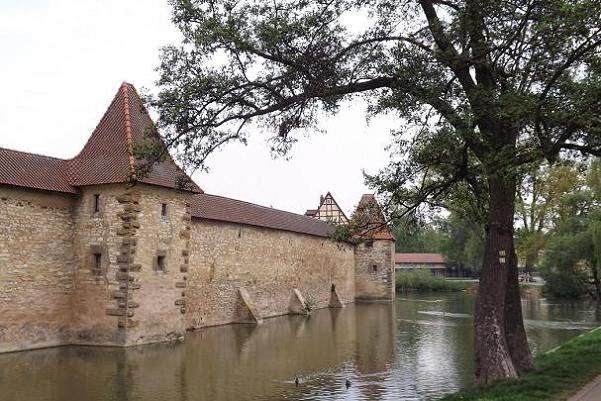 Weissenburg, town walls
Weissenburg, built on the vicus of the Roman fort, still has a significant part of its town walls intact. The old trench has been refilled with water in one section to make it look even more original. 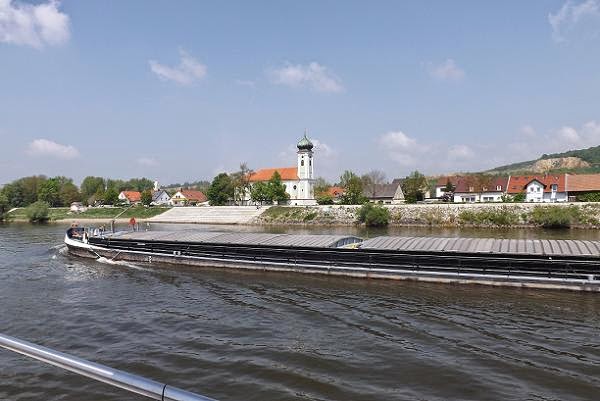 Near Regensburg, impressions of the Danube
Regensburg lies at the Danube, and I took a two hours cruise on the river. You know how much I like that sort of thing (I did so on the Ouse, Dee, Rhine and Mosel as well).