22 Feb 2016
Shiny Things from Viking Times - The Gold Treasure of Hiddensee: The Historical Context
On November 13, 1872, a severe northeastern gale swept over the island of Hiddensee, causing a flood that hit the flat southern part of the island that had been deforested since the Thirty Years War, destroyed several fishing villages of reed thatched wattle and daub cots, and broke the island in two parts by washing away some of the land. But it turned out the flood also brought to light something that had lain hidden in a former bog which had long dried up, for a thousand years. Something shiny. 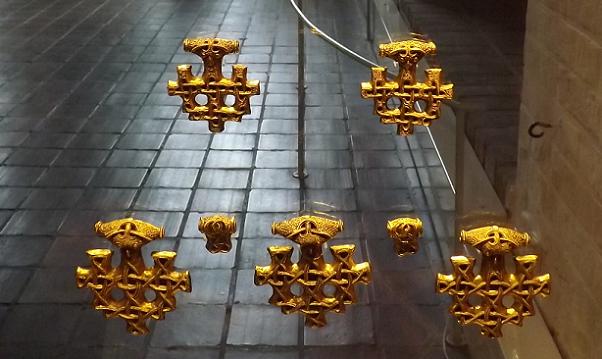 Six of the ten gold pendants found on Hiddensee between 1872-74
The story of the find and its successive acquirement by the Provincial Museum for Lesser Pomerania and Rugia, as the Historical Museum Stralsund was then called, is a bit garbled and mixed with legend. The most likely variant is that the pieces were discovered separately, partly through planned search at the site of the first find, partly due to a second flood in 1874, and sold separately as well, though in some cases there may have been a time lapse between the finding and selling of items.

There are two reasons: for one, albeit it technically was a hoard find (see below), the inhabitants of Hiddensee wanted to make sure they could claim it as flotsam, because in that case they had a right to the treasure and the money. A hoard find would have belonged to the owner of the land, the Monastery of the Holy Spirit in Stralsund. The second reason was likely that the finders wanted to make sure they got a fair price. Fortunatly for them, the director of the museum, Rudolf Baier, who immediately recognised the Viking craftmanship, was willing to collect whatever the fishermen found and paid handsomely. A few pieces sold to other people were later gifted to the museum to complete the set. 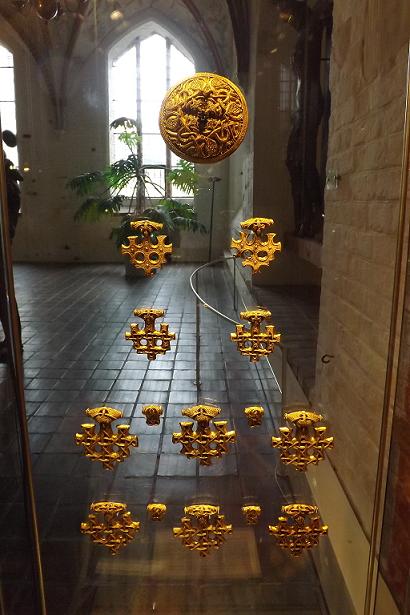 The first piece to appear on the market was one of the larger cross shaped pendants. It was said that goodwife Striesow had found it 'at the beach near her garden after the storm'. The buyer, goldsmith Petschler, sold it in turn to the district's president Count Behr-Negendank in March 1873 (the count later gave the piece to the museum). Striesow's son-in-law, the sail maker Linsen, searched the beach and found seven more pieces which he sold to Rudolf Baier in June 1873. Another woman found a smaller cross pendant and one of the intermediate pieces, which she sold to a goldsmith in August. The rest of the finds was sold to Baier in 1874 after the February flood, though we don't know how many pieces came to light then and whether others had already been found in 1872 and stowed away. Baier spent 2257 Mark on the various pieces, money the poor fishermen could well use restore their homes and repair the rift in the island the flood had caused.

The exact site of the find remains obscure; we only know it was located near the village of Neuendorf on the western side of the island, at the Baltic Sea coast. Baier assumed the pendants and other pieces had been stored in at least two clay jugs - the double bended neck ring and the lack of sand or other remains stuck between the filigree point at such a preservation - and been deposed in a former bog. Traces of the jugs have not been found, but one can imagine the fisherfolk was looking for gold, not potshards. And if they found a jar, they may have 'forgotten' to mention it because of the hoard versus flotsam thing, and one can't blame them. 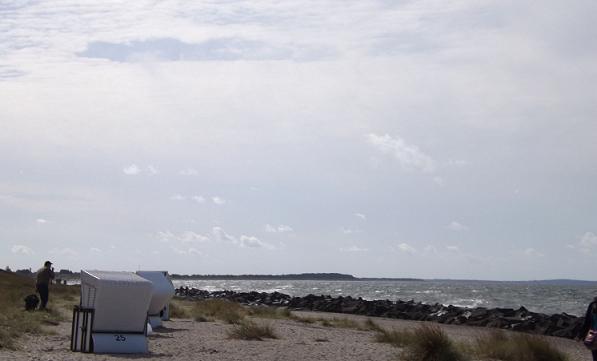 Hiddensee, the Baltic Sea coast
We can't say for sure if the treasure is complete, but the existing pieces make for an impressive set: A neck ring of 44 cm length (and 13.5 cm diametre) made of four entwined wires, a fibula of 8 cm diametre, six larger cross shaped pendants of about 7 cm length, four smaller cross pendants of about 5 cm length, and four 'intermediate' pendants of 2 cm length. The weight of the gold is 598.2 gram and the purity between 93% and 97% which is very high. All pieces are masterfully crafted in filigree and bead work, and date to the second half of the 10th century (1). The craftmanship and production of the pieces is described in this post. 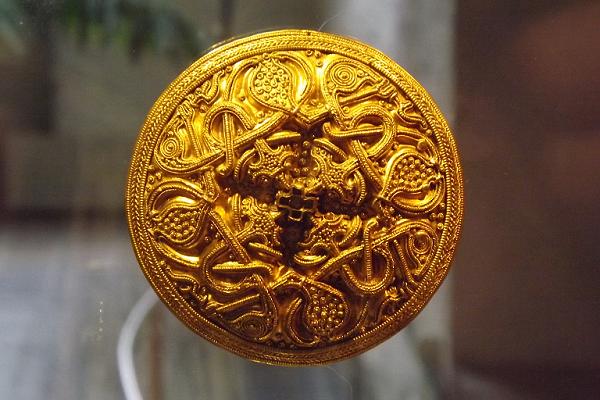 Hiddensee Treasure - the fibula
The treasure dates most likely to the time of Harald Bluetooth and may have been commissioned by himself or someone else sufficiently rich and important to pay for the material and craftmanship. The finds of jewelry of the Hiddensee-style concentrate on Denmark proper, southern Sweden and Norway, Haithabu / Hedeby and the Pomeranian Baltic Sea coast, all places under Danish control at the time of Harald Bluetooth. The comparative dating of such finds points at the second half of the 10th century. Albeit we will not likely ever by able to say for sure who owned the jewelry and who deposited it in a bog on Hiddensee island, there are a few arguments in favour of a connection with King Harald.

Harald Bluetooth, born ~AD 920, followed his father Gorm to the Danish throne probably in 936 (2). Harald accepted King Otto I of the Germans (the later Otto the Great) as liege lord after he lost a battle about the possession of the Jutland peninsula in 948. Harald became Christian and supported Otto and his bishops in the Christianization of Scandinavia - the first bishoprics in Denmark were founded during his reign. In 950, he founded Jomsburg (Jume) at the Baltic Sea coast, seat of the famous Jomsvikings. The localisation is disputed, but it must have been somewhere between the Darß peninsula west of Stralsund and the Oder river outfall (3).

After the death of Håkon the Good in 961 by the hand of his nephews (sons of his brother Erik Bloodaxe), Harald snatched southern Norway and became king there as well in 970, forcing Erik's sons to become his vassals (4). 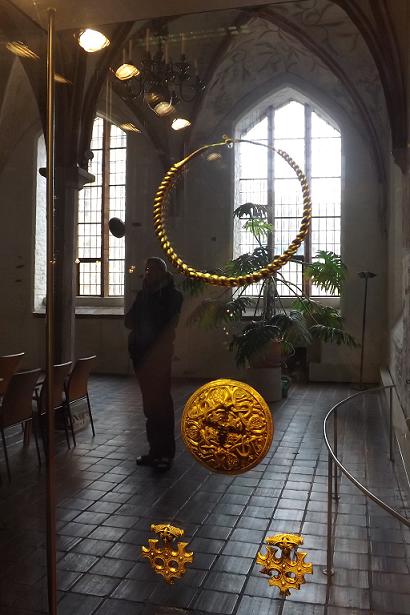 Hiddensee Treasure - the neck ring, fibula and some pendants

Harald married in second marriage Tove, the daughter of the Abodrite king Mistivoy (the Abodrite were a Slavic tribe settling along the Baltic Sea coast from the Schleswig peninsula to the Oder). Mistivoy was another pagan king who had accepted the Christian faith and vassalty to King Otto of the Germans in 965.

Harald's son from his first marriage, Sven Forkbeard, remained a pagan and tried to oust daddy. He was supported by the Jomsvikings. The conflict culminated in a sea battle at Helgenes near Bornhom. Harald was hit by an arrow and badly wounded. He escaped with some faithful retainers to Pomerania where he sought shelter with his father-in-law Mistivoy. That brought him close to the islands of Rugia and Hiddensee. Harald died from his wound in exile in 986 (5). His body was brought to Roskilde and buried in the church he had built there.

Since the jewelry was made for someone of high rank, and most likely had been worn by a woman (the neck ring is too small for a man and the pendants would make for a pectorale-style set a woman might wear), it is a possible scenario that Tove was the owner of the set. She may have fled together with her husband and for some reason decided to bury the treasure on Hiddensee island (6). 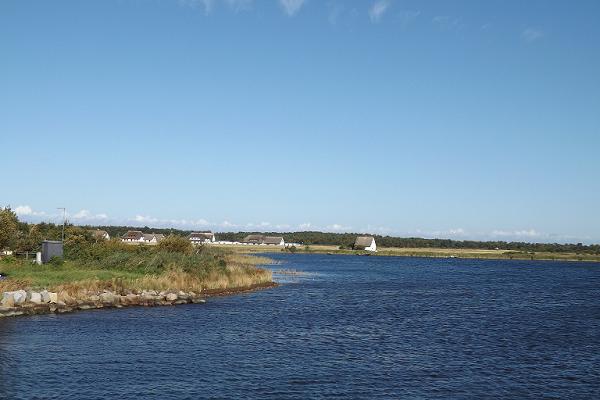 The landscape near Neuendorf / Hiddensee from the lagoon side

There is scarce proof for settlement on Hiddensee in the 10th century, and what traces we have concentrate on the land at the foot of the Dornbusch hill in the northern part. At that time a forest of beech, oak and alder covered most of the island, with a concentration of alder on the wet ground in the flat parts where also some lakes and bogs could be found between the dunes. It likely was one of the bogs that served as hiding place for the treasure. A map from 1835 still shows two small lakes and a bog near Neuendorf, fifty years before the discovery of the treasure.

The neighbour island Rugia was more densely populated in the 10th century. The predominant population was Slavic, but there were contacts, both peaceful and belligerent, with the Vikings, esp. from Denmark, during the 9th to 12th centuries. Some other shiny things of Viking work have been found in the area, which puts the Hiddensee Treasure into a historical context of Slavic-Scandinavian-German contacts. The style and craftmanship connect the treasure to Haithabu / Hedeby (7) and other southern Scandinavian trade and craft centres, as the next post will show. 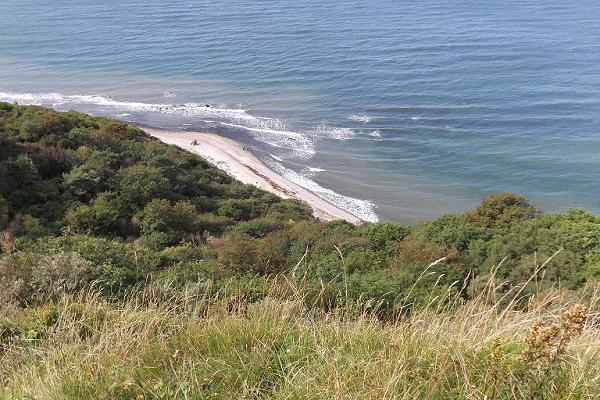 View from the Dornbusch hill to the sea coast
Footnotes
1) My photos are of high quality replica made in Mainz in 1990. The originals at the time were in a safe. They are exhibited in Stralsund since December 2015, but hidden behind two inches of armoured glass, which would make photographing more difficult.
2) Most sources have 936, but dendrochronological dating of the church Harald built for his father in Jellinge point at 958. I think the first date is correct because it was Harald who accepted Otto as liegelord in 948. The church may have been built several years after Gorm's death.
3) Jume / Jomsburg is often likened with the legendary Vineta, one of the sunken cities - like Kêr Ys in Brittany or Cantre'r Gwaelod in Wales.
4) Erik Bloodaxe had been married to Harald Bluetooth' sister Gunnhild, so his sons were Harald's nephews as well. Gotta love those intertwined family connections.
5) The date is not undisputed since the sagas and chronicles (esp. Adam of Bremen) give contradictory information, but the most likely variant.
6) Another suggested historical connection is the battle of Svolder (AD 1000) where Harald Bluetooth's son-in-law Olaf Tryggvasson fell. Its site is unknown; there are several candidates from Rügen to the Öresund. But even if the battle took place near Rügen, it would not explain how the treasure came to be buried in Hiddensee any better than the connection with Harald Bluetooth's death in Jume.
7) A whole set of jewel making tools has been dug out of the former harbour in Haithabu in the 1970ies.

13 Feb 2016
Kids in the Rain
When I was in Schwerin - the only really bad weather day during my autumn tour - I found this charming little fountain at a lake called Pfaffenteich. It suited the weather that day, and it pretty much fits most of this winter as well. 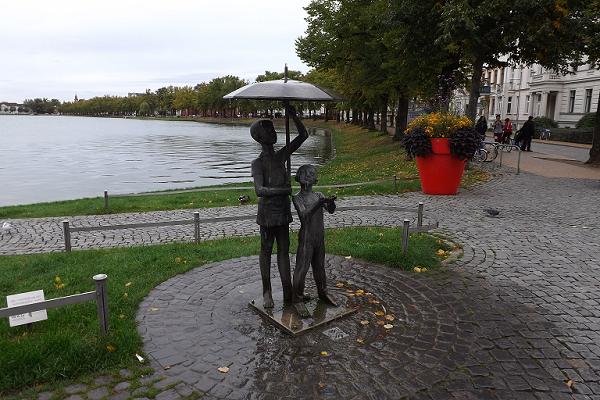 Umbrella Kids, a fountain at the Pfaffenteich in Schwerin
The statue is called Schirmkinder - Umbrella Kids. It is a work by the sculptor Stephan Horota (born 1932). The bronze statue with fountain was installed in 1973. Yes, there is water coming out on top of the umbrella even on a dry day, dripping down on all sides and into the hands of the little boy. 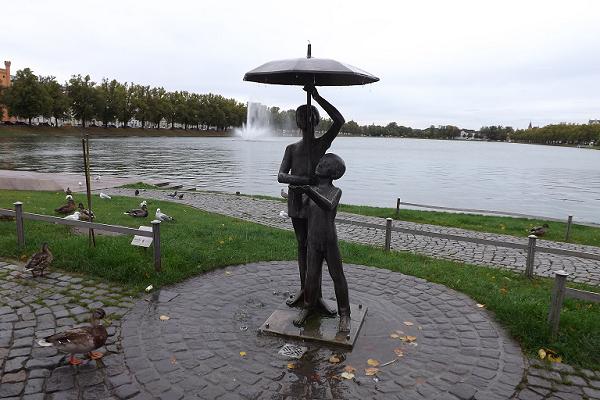 The Umbrella Kids from a different angle
On a rainy day, the fountain function of the Umbrella Kids is lost among more rain pouring down from higher above. But the kids gave me a smile nevertheless; the statue fitted the dreary mood of the day perfectly.